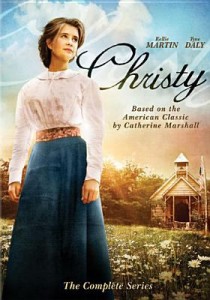 Some of the best stories originate from real life, like Catherine Marshall’s 1967 novel Christy. Marshall was inspired to write her famous book based on the experiences of her mother, Leonora Whitaker, who left her family and home in North Carolina to teach at a mission school in the Appalachian Mountains in 1909. After Marshall and her parents later visited the mission school in Del Rio, Tennessee in the late fifties, Marshall wanted to tell her mother’s story. Many elements in Christy are rooted in fact. Marshall conducted extensive research into Appalachian life and culture, so even the fictionalized aspects of the novel are still well-founded.

Twenty-seven years later, Christy was developed into a TV series, which debuted on Easter Sunday on CBS. True to the novel, the show was filmed in Tennessee. Kellie Martin portrayed Christy. Tyne Daly won an Emmy for her supporting role as Alice Henderson, a Quaker missionary, and LeVar Burton joined the cast in season two. Fans of Marshall’s novel enjoyed the series, though their satisfaction was short-lived. Executives canceled the show soon after the season two finale was shot. Twenty-one episodes were filmed in all.

Viewers were upset about the cancellation because the season two series finale ended on a cliffhanger with Christy split between two very different men vying for her affection, the rugged Dr. Neil MacNeil and the handsome Reverend David Grantland. Seeking resolution, fans wrote to CBS requesting that the show be put back on the air. Five years later, in 2000, PAX network (since renamed Ion) continued the unresolved plot line in a made-for-TV movie. Some of the same actors reprised their roles, but Christy was recast using an unknown actor, Lauren Lee Smith. Three TV movies adapting Marshall’s novel were released between 2000 and 2001 giving fans the closure they were denied in the canceled TV series. The movies — Christy: Return to Cutter Gap, Christy: A Change of Seasons and Christy: A New Beginning — were filmed primarily in Canada. 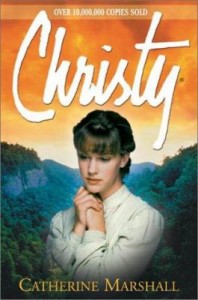 A book cover with Lauren Lee Smith as Christy.

Christy still boasts an active fan base. Starting in 1997, enthusiasts of the novel and TV show have met to discuss their fascination for Christy. The annual meeting was dubbed “ChristyFest,” and it often occurs in Townsend, Tennessee, the filming location of the TV show. This year ChristyFest will be held May 23-25 in Del Rio, Tennessee. From the ChristyFest site, it appears that registration will open soon.

No doubt, Christy has captured the attention of loyal fans, and the love triangle between the main characters is a big draw. In writing this post, I found evidence of a Neil and Christy fan site with photos from the TV show and the TV movies, interviews with cast members, episode guides, and analysis and more. There are also special fan fiction sites and some fictionalized Twitter accounts created from the perspectives of Christy, Neil, David, and Alice.

Catherine Marshall is recognized as a Christian writer. The Christy Awards were created to acknowledge Christian fiction writers and the three Christy TV movies were backed by the support of the now defunct PAX network, which focused on “family-based” programming. It appears that Inspiration Network, or INSP TV, currently broadcasts episodes from the Christy TV series. INSP headquarters are in the Charlotte metro area. 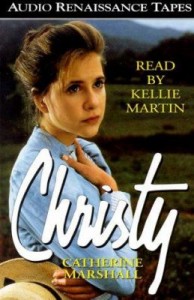 An audiobook cover with Kellie Martin as Christy.

Read the original blog post on Catherine Marshall’s Christy here. The complete TV series is available through the UNC-Chapel Hill Library catalog along with the original novel and an audiobook version of the novel read by Kellie Martin.

After hearing a missionary doctor speak about his work in the Great Smokies, nineteen year-old, Christy Huddleston volunteers to be a mission teacher. She leaves her home and well-to-do family in Asheville and travels to the remote Cutter’s Gap, a place that does not take easily to outsiders. She faces numerous challenges related to both the place and the people of rural Appalachia–including the lack of modern conveniences, the influence of folk beliefs and superstitions, moonshining, and the community’s abject poverty–but her faith sustains her. Miss Alice, the missionary who founded the school, helps her and she is romantically torn between two men: minister David and the locally-born Dr. MacNeill. Most of the book’s action takes place in Cutter’s Gap, which is actually based on the community of Morgan Branch, located just over the border in Tennessee in the Cherokee National Forest. Based on the life of the author’s mother, Christy has inspired a television series of the same name, as well as several TV movies.