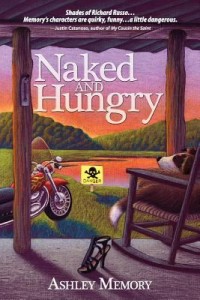 H.  T. McMullen has been roughing it. Once a successful loan officer with an expensive house, car, and wife, he lost it all to the recession. Disillusioned with his formerly excessive existence, he builds a rickety cabin in the backwoods of his fictional hometown of Yatesville, North Carolina, set deep in the Smokies. McMullen is surprisingly happy living with minimal comforts and growing his own food, despite the uncomfortable proximity of his Bible-thumping, gambling mother. He has his prize motorcycle and an ill-tempered dog named Shorty for company. What more could a man need? But one day he pulls a bright purple fish out of the nearby pond, and his simple life begins to disintegrate.

It’s clear that someone is poisoning the surrounding environment, and H. T. McMullen aims to find out who. But it’s more than just a simple matter of cornering the perpetrators. They know H. T. is sniffing around and decide to send a brash message in the form of two bullets– one in H.T.’s leg, and one in his dog, who barely survives. H. T. sends a plea for help to a Raleigh-based environmental coalition, but he doesn’t really expect an answer. He is delightfully surprised when stunning environmental lawyer Jessica Beane shows up on his doorstep, ready to personally take on his complaint. McMullen hasn’t really thought about romance since his divorce, but something about Jessica and her long red hair makes him a bit distracted. Unfortunately, there isn’t much time for a budding affair, since someone is clearly out to silence him. Soon H. T. and Jessica are on the run, and up to their necks in both poisonous water and deadly killers.

Ashley Memory’s debut novel, Naked and Hungry is simultaneously a romance, an environmental thriller, and the story of a man’s attempt to reinvent himself in our shifting times.