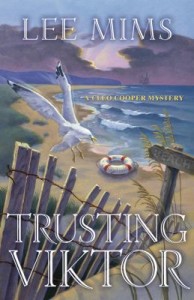 Cleo Cooper has a good relationship with her ex-husband, Franklin Donovan Cooper IV (“Bud”). Cleo is a well known and well compensated economic geologist, but Bud still feels the need to watch out for her interests.  At Bud’s suggestion, Cleo has invested in a company that is exploring for natural gas off the North Carolina coast. This was supposed to be just a financial investment for Cleo, but when the company fires most of its geologists, Bud pulls Cleo in to use her expertise in a way that protects their investments.

Cleo does not relish a helicopter ride out to the drill ship, but the ride itself becomes the least of her problems. The drilling operation is clearly in flux, Cleo gets mixed signals about who is in charge, and soon after she arrives she is attacked by an unknown assailant. Cleo is grateful that her stay on the rig is a short one.

When the body of a man who might have been her assailant washes up on the sands of Atlantic Beach, Cleo is visited by the police.  Cleo cannot be sure the dead man was her attacker but when she looks at his body, she sees something that might implicate Bud in the man’s murder. Soon Cleo is back on the drilling ship–for personal and professional reasons. She’ll soon find that there is more than one kind of treasure beneath the ocean waves.

This well plotted mystery will be of special interest to readers who know North Carolina’s history–both the recent saga of offshore energy exploration and story of how German U-boats prowled along our coast during World War II.

This is the second Cleo Cooper mystery.  The first title in the series is Hiding Gladys. 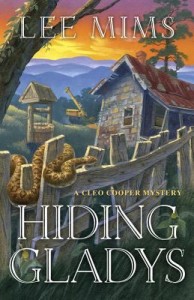 Cleo Cooper has just found the mother-load–literally. The largest deposit of granite ever discovered on the eastern seaboard is sitting quietly underneath a farmhouse on the Carolina coast, and Cleo is certain that it will both make her fortune and her reputation as a geologist. The property owner, an elderly woman named Gladys Walton, is thrilled as well, since she’ll be equally as wealthy. Unfortunately, Gladys’ two ne’er-do-well adult children, Robert Earle and Shirley, have their greedy little eyes set on wresting control from their still-capable mother. Tension builds when a body is found in the well on the property and a rival geologist gets wind of Cleo’s find. When Gladys has finally had enough, she goes into hiding, and sometimes not even Cleo can find her.

This might be for the best, as Cleo has enough to deal with– mystery attackers, rattlesnakes appearing mysteriously in her locked car, and two men vying for her attention. Luckily, Cleo can take care of herself, both in the back woods of Onslow County, and in fending off unwanted attention. But what if the real danger is from someone she doesn’t even suspect? This first novel in the Cleo Cooper mysteries is definitely rock solid entertainment.