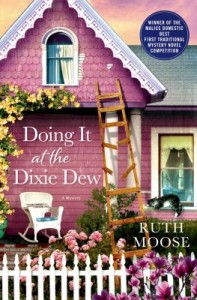 Beth McKenzie was brought up by her grandmother, Mama Alice, in Littleboro, North Carolina.  Beth went off to college and rarely came back, but when Mama Alice has an accident and requires care, Beth gives up her so-so life up North and comes home.  Once there, Beth feels the tug of memories and traditions, so much so that when Mama Alice dies, Beth decides to remake the family home into a bed-and-breakfast.

Beth has bet all she has–and all she can borrow–on this new venture.  Imagine her horror when a guest dies on opening night.  Miss Lavinia Lovingood was well into her eighties, so Beth believes that her death was natural, if untimely.  But the police chief thinks otherwise–and he’s right.  Suddenly Beth’s new business is in jeopardy even as she and that handsome carpenter Scott Smith put the final touches on the sun-porch-turned-tearoom.

Scott is just one of the characters who readers can hope to see in future novels.  Local pharmacist Malinda Jones, Beth’s housekeeper, Ida Plum, and that antagonist police chief  all look to be characters who could appear in future books.  The fictional setting for the novel, Littleboro, bears a strong resemblance to Pittsboro, North Carolina, the small town that the author calls home.

Ruth Moose is an accomplished poet and short story writer.  This is her first novel.

Check this title’s availability in the UNC-Chapel Hill catalog.

Comments Off on Ruth Moose. Doing It at the Dixie Dew. New York: Minotaur Books, 2014.