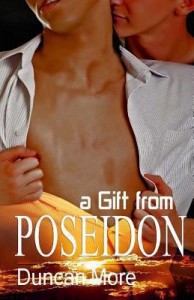 Evan and Frank used to share a relationship, but now they are just business partners.  Evan is a painter, and with Frank he owns an art supply shop and gallery in Manteo.  Ten years ago this was all a romantic adventure, but now life is routine and dull for both men.  Frank has a new partner in Raleigh who he visits on the weekends when Evan takes his turn managing the shop.  Evan has not moved on to anyone new, but that is about to change.

When a red Corvette drives Sterling Phelps’s van off the road just north of Rodanthe, the first house that Sterling and his friends come to is Evan’s.  Evans is not impressed with the way Sterling’s friends kid around in his house, but the four young men are good-looking and unselfconsciously pose for some photos.  These photos, especially the ones of Sterling, become inspiration for Evan.  In short order, Evan is producing some of the best drawings and paintings that he has ever done.  Evan feels a connection to Sterling and when the young man returns to Manteo, Evan wants to keep him in his life.  A gay relationship is new territory for Sterling, but he falls passionately for Evan.

A Gift from Poseidon follows the two lovers through the summer and into the new year.  Their relationship is complicated by differences in their ages, experiences, and Evan’s work, and also by their friends whose relationships are less settled. Can Evan and Sterling have happily-ever-after when their friends seem so happy just to live in the moment?