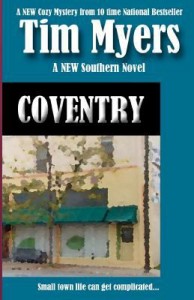 Widower Abraham Cole has just sent his only daughter off to college, and his home in the small mountain town of Coventry, North Carolina feels a little empty. Luckily (maybe), he is both the town’s mayor and its sole handyman, so there is a nonstop list of tasks to which he should be attending. Some he enjoys more than others, but Abraham takes it all on, from fixing Opal Matheson’s front door to soothing tensions between feuding business owners. Although his friends and neighbors threaten on a daily basis to withhold their vote from him in the next election, he is roundly loved by the small, tightly knit community…at least until Rena Ashe arrives.

Rena Ashe has everyone excited– the town’s ancient librarian, Ms. Miller, is retiring, and Rena is going to be her young, multi-credentialed replacement. Some of the men in the town have also been quick to note that she isn’t bad looking, either. Unfortunately for Abraham, he gets off to a bad start with the town’s newest resident, and things go downhill from there. A neighbor keeps dropping her unruly son off at Abraham’s on the weekends because he needs the influence of “a good man,” the fight between two shop keepers becomes increasingly chaotic, and worst of all, his daughter Hannah has announced she’s going to Europe with a friend for the holidays. But it’s certain that things will turn around soon, because Coventry always looks out for its own. 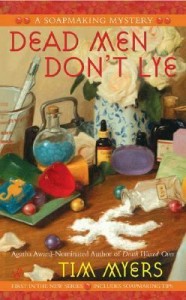 Meet the Perkins clan: a family of six adult brothers and sisters devoted to soapmaking in the fictional town of Harper’s Landing, North Carolina. Under the watchful eye of their mother, the siblings own and operate Where There’s Soap, an artisan soap shop and factory where they produce finely crafted soaps, teach classes, and spend much of their time as a family. Benjamin Perkins, the eldest, often acts as a surrogate father to his younger siblings by taking on the lion’s share of the management and making sure no one gets into too much trouble.

He has his work cut out for him. One morning while opening the store, Ben finds supplier Jerry Sanger sprawled on their back steps–dead. While Jerry has been doused in lye, the corrosive base used in soapmaking, it’s clear that someone deliberately broke his neck beforehand. This looks bad for Ben’s little sister Louisa, who happened to be dating Jerry and had also just found out that she wasn’t the only woman in his life. In fact, as the investigation proceeds, it becomes more of a question of who Jerry wasn’t dating! Still, Louisa is the prime suspect, and Ben will do anything to protect his family. Luckily, his longtime off-again-on-again girlfriend, the tough and capable Molly, is on the Harper’s Landing police force. Ben investigates Jerry’s murder, determined to find the real killer, with the exasperated Molly in tow. His search introduces us to the many colorful characters in Harper’s Landing and eventually leads straight to the killer.

The first installment in the Soapmaking Mysteries, Dead Men Don’t Lye is a sordid tale of murder…complete with useful soapmaking tips! A cozy mystery perfect for those who also enjoy crafts.

When Harrison Black discovers the corpse of his ex-girlfriend, Becka Lane, in the Gunpowder River, he is overcome with shock and sadness.  Although they were no longer a couple, Harrison and Becka had maintained a strong friendship.  As Harrison and his friend, Markum, look for clues in Becka’s death (the police have ruled it a suicide), the quiet settlement of Micah’s Ridge is rocked by another disturbance.  Greg Runion, a brash real-estate developer, is trying to get landowners to sell him their property so that he can build condominiums and shops.  Harrison and other townspeople are completely against this plan, which would disrupt the tranquility of their village.  When Harrison cannot get in touch with Cyrus Nash, an elderly gentleman who owns a lot of property in Micah’s Ridge, he becomes suspicious of Runion’s intentions.  As Harrison investigates Becka’s death and Cyrus Nash’s strange temperament, he discovers that they are related.  By unearthing their connection, Harrison is able to clear Becka’s name, help his friends, and preserve Micah’s Ridge.

A Flicker of Doubt is Tim Myer’s fourth novel in the “Candlemaking Mystery” series.

Ben Perkins is comfortable in his position at Where There’s Soap, the family-run soap-making business. He works with his mother and siblings, and he gets to know his clients in Harper’s Landing, North Carolina well. However, strange events happen in this quiet town, and they all have connections to the Perkins family. Ben’s relatives trust him to get to the bottom of all of these mysteries, which usually have potential to affect them and the store negatively. As he juggles clearing the Perkins family name and solving the crimes, Ben looks for love. Although content with his life, shake-ups keep things interesting for Ben and the reader.

With a setting as unusual as a lighthouse in the mountains of North Carolina, it is not surprising that strange things happen there. The lighthouse is the focal point of Hatteras West Inn, the hotel run by Alex Winston in Elkton Falls. Although Alex would like to keep the atmosphere quaint at the inn, a series of murders has given the destination some undesired attention. Along with his friend and housekeeper, Elise, Alex must get to the bottom of the mysteries occurring at Hatteras West if he is to stay in business. With bizarre guests and a police force that is not interested in his input, Alex’s quick wit allows him to solve the cases and to save the inn’s reputation.

Harrison Black pays close attention to detail.  After taking over At Wick’s End, a candle making shop in Micah’s Ridge, North Carolina, Harrison finds his inner-Agatha Christie.  Odd deaths begin to occur and, in his opinion, they do not add up.  When the police rule them accidents or suicides, Harrison decides to do a little investigating of his own.  His determination to set things straight results in justice for all parties.  When Harrison is suspected of killing a fellow proprietor, he must use his powers of observation to prove his innocence and to protect his name.

Comments Off on Tim Myers.Candlemaking Mysteries.

After a fire destroyed the original Dual Keepers’ Quarters of the Hatteras West Inn, Alex Winston, owner of the lighthouse-themed hotel, has a new building constructed with funds from emeralds found on the property. After finishing touches are put on the structure, Alex decides to host a mayoral debate to get some publicity. The day is going well – there’s a great turnout and two of his best friends, Mor Pendleton and Emma Sturbridge, announce their engagement – until Mor discovers a dead body in the driver’s seat of his truck. The dead stranger is Emma’s ex-husband, and both Emma and Mor become suspects. A few days later, one of the candidates is found dead. The two cases seem completely unrelated, but Alex wants to investigate the crimes. Unfortunately for him, the crotchety sheriff has no interest in an amateur fiddling in his cases. As the mayoral race heats up and Alex’s relationship with Elise Danton, his housekeeper, strains, he is determined to get his sleepy (fictional) town of Elkton Falls back to normal. When Hurricane Zelda hits right as Mor and Emma’s wedding ends, the remaining guests find shelter in the lighthouse. Within those walls, the truth behind an unlikely murderer surfaces, and Alex helps solve the mystery.

When Clifton (“Cliff”) Clifford, the security guard protecting the Carolina Rhapsody Emerald on display at the Hatteras West Inn, is found stabbed with a lighthouse letter-opener, his death, though tragic, is easy to explain. Certainly a thief had been interested in the gem, and Cliff was in his or her way. The fake emerald left in the stone’s place is proof. However, for Alex Winston, Cliff’s murder is troubling because it occurred at his inn. A suspicious homicide is not exactly something that he wants to include in his brochures, so Alex feels compelled to help solve the case and possibly find the missing gem. When a guest out jogging is shot in the leg and an unseen gunman fires shots at Alex and Elise, the housekeeper, his desire to get to the bottom is more urgent. Adding to the tense atmosphere at Hatteras West is the finding of Patrick Thornton, a surveyor, that the inn’s lighthouse, its main attraction, is not on Winston land. Can this be true? As Alex learns more about the Thornton and the strange new muffin lady in town, he realizes that an odd connection could solve the mystery.

In Tim Myers’ third novel in his Lighthouse Inn Mystery series, the shocking murder of innkeeper Alex Winston’s uncle Jase is not the only mystery. Jase, a lawyer in the fictional town of Elkton Falls, North Carolina, had been working on the estate of Mathias Trask at the time of his death.  Alex and most of the locals are unfamiliar with Trask or his stuffy family members who have come to Hatteras West Inn as part of his last request. Although it is not a stretch to suspect Trask’s estranged wife and greedy children of being interested in the Mathias’s will, one of them murdering his lawyer is.  As Alex grieves and deals with the odd family, he decides that he must find his uncle’s killer in order to cope. He investigates the people who have come to Hatteras West: the Trask family; Mathias’s secret daughter who has just been announced to the rest of the family; Alex’s distant brother Tony who relied on Jase’s financial help and would have benefited from his inheritance, and a strange drifter who suddenly showed up to help out at the inn. Just as time is starting to run out and Alex’s friends are threatened, Alex discovers the culprit and brings closure to Jase’s death.

Where There’s Soap, the Perkins family business, seems to be a magnet for mysterious murders. In the past, there have been two deaths connected to the family’s store. In both cases, Ben, the main character and brother to six siblings, determined that he had to get to the bottom of the mystery in order to protect a loved one.

When Ben scheduled a lecture and book signing with Contessa New Berne, the soap-making expert, at Where There’s Soap he expected an afternoon that would be beneficial not only to his business but also to the bookstore owner, his girlfriend Diana. However, the contessa is murdered just before her lecture, ruining the event and turning the fictional town of Harper’s Landing, North Carolina upside down. When it is discovered that Contessa New Berne was the drunk driver who caused the accident that killed Diana’s parents, people become suspicious of Diana. However, there are many more suspects who could have wanted the unpleasant contessa dead: her assistant who was unusually late to the event, a jilted ex-lover, another soapmaker who claims that the contessa stole her material. With a frightened girlfriend, a business tainted by the murder and bad press, and a successful track record in catching criminals, Ben settles into detective mode to find the elusive murderer.

A Mold for Murder is Tim Myer’s third novel in the “Soapmaking Mystery” series.