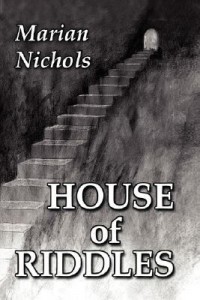 Raven and Shane Hawkins are newlyweds honeymooning near Boone, North Carolina when they see an advertisement for a dilapidated mansion. Curious and feeling spontaneous, the couple travel south to Swain County, where they purchase the estate for a mere $6500. As their families visit and they explore the house, it quickly becomes clear that something isn’t right. There are odd noises and phone calls, an hour sometimes passes but only feels like a few minutes, and strange shapes and shadows appear. When Raven finds a mysterious parchment containing indecipherable writing hidden in one of the doors, she knows she must call her great-grandfather, Blackfox, to help her and Shane solve the puzzle. A full Cherokee, Blackfox is an ancient and wise person, although he struggles with broken English. Blackfox realizes immediately that the mansion is a holy place, and is filled with restless spirits. With her great-grandfather’s help, Raven and Shane uncover secret chambers and passages, finding treasure along the way. Unfortunately they also find bodies, which Blackfox declares explain their ghostly encounters.

A homeless man called Rusty arrives at their door looking for the former owners of the house, and Shane and Raven take pity on him, inviting him to stay. But Rusty’s presence only increases the strange phenomena, and as the newlyweds uncover more about the violent history of the mansion, Raven also uncovers more about her Cherokee family’s sad past, acting as a translator for the spirits of those long gone. Featuring many surprises and thrills, including an actual raven with the power of speech, this novel engages in an interesting characterization of the Cherokee.

Check this title’s availability in the UNC-Chapel Hill catalog.