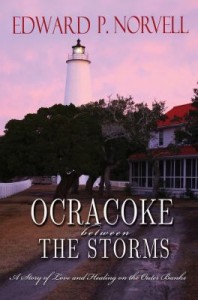 Four months ago, Luke Harrison lost his wife of four years, Karen, in a fatal car accident. Without Karen, Luke cannot find much purpose in his life. Luke’s father died when he was a baby and his mother was incarcerated following her addiction to drugs, so he spent his adolescence drifting through foster homes. Karen was Luke’s closest and only true family. Wracked with grief, Luke drives from his home in Kannapolis to Ocracoke Island where he intends to end his suffering by drowning himself. But just as the rough whitecaps are dragging him under, an unexpected bystander rescues Luke from the freezing water. Hank Kilgo, a retired Coast Guard officer, is Luke’s savior. After Hank pulls Luke to safety, he insists that Luke rest for the night at his home with him and his wife, Cora.

Luke continues to stay with the Kilgo family much longer than his initial invitation. The natives welcome Luke unconditionally. Before he knows it, Luke is immersed in the area’s island culture and takes on odd jobs. Novelist Edward P. Norvell portrays the intimate community of Ocracoke with painstaking detail. Norvell’s Ocracoke is a vibrant small town brimming with special traditions such as the Ocracoke Festival, volunteer efforts like a radio station-sponsored bachelor auction, and of course, local politics concerning the invasive Park Service and their protection of the loggerhead turtle population. The most colorful town character is Thomas Michael Joiner or TMJ for short. TMJ and Luke are a union of opposites. Where Luke is humble and modest, TMJ is gregarious and brazen. Despite the pair’s differences, Luke and TMJ become close friends, and TMJ helps Luke feel at home in Ocracoke, particularly amongst the other single twentysomethings on the island.

Slowly but surely, Luke forms a lasting attachment to Ocracoke. At first he tries to keep the situation casual–from his living arrangements, to his employment, to even his love life. The fact that Luke develops a love life only a few months after Karen’s death confuses him. During the night, he dreams of Karen and copes with his guilt over her accident and what he might have done to prevent it. The idea of replacing Karen so quickly strikes Luke as callous. Whether Luke is aware or not, Ocracoke and its people restore meaning to his life and help Luke survive his heartbreak. Ocracoke between the Storms is a tale of redemption and moving past tragedy in life. Norvell has written three other novels, Southport, Shadows, and Portsmouth, all of which occur in coastal locations around the state. Clearly, Norvell derives a large amount of inspiration from the beaches of North Carolina.

The waters off the Outer Banks were crowded during World War II, with American and British submarines trying to keep German U-boats from getting close to American shores. In 1942 two U-boats and one British submarine were sunk. One U-boat contained a Enigma code machine that the Germans wanted to recover. A German officer was sent ashore, in disguise, to Portsmouth Island. A widow there believed him to be the British officer he claimed to be, and they fell in love. This novel nicely weaves together her story and his, following them through the war years and beyond. The novel also gives a good sense of life on the Outer Banks during the 1940s.