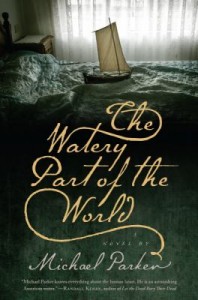 Some years ago- never mind how long precisely- having little or no money in my purse, and nothing particular to interest me on shore, I thought I would sail about a little and see the watery part of the world. So begins Ishmael’s adventures, and Michael Parker likewise takes the reader straight out to sea to meet Theodosia Burr Alston. Historically, Theodosia was the highly educated daughter of the infamous Aaron Burr. In early 1813, Burr had returned from voluntary exile in Europe, and Theodosia was eager to join him. Sailing north to their reunion in New York, she sank along with her ship off the North Carolina coast, never to be heard from again. Which is of course where all the best stories begin. Parker’s Theodosia survives the pirate raid that scuttles her vessel, eking out a precarious existence on the Outer Banks with the help of a recluse named Whaley. Though far removed from the elegant lady she once was, Theodosia is still her father’s devoted daughter. Among the most valuable cargo on the ship were Aaron Burr’s personal papers; papers that, falling into the wrong hands, would certainly endanger his life. The pirate captain, a savage but educated man named Daniels, now possesses them. Theodosia is determined to steal them back. Badly injured in attempting their recovery, she flees to nearby Yaupon Island.

Sail forward one hundred and sixty odd years to 1970. Yaupon Island is “six square miles of sea oat and hummock afloat off the cocked hip of North Carolina.” Its population is three: two old, white sisters, Whaley and Maggie, descendants of the remarkable Theodosia, and Woodrow Thornton, the many-greats grandchild of the man who saved her life. Why does Woodrow stay on that hurricane-battered spit of sand, his children wonder? All to care for two crazed white women who don’t treat him any better than a handyman? Maggie and Whaley, different as night and day, are certainly more than a little mad in their own ways, but possibly from sorrow and disappointed hopes more than anything else.

Parker flashes back and forth between these two tales like lightning on the shoals, filling his watery world with historical figures, heartbreak, betrayal, and the raw desire of the human heart to outlast every attempt at drowning.

Comments Off on Michael Parker. The Watery Part of the World. Chapel Hill, NC: Algonquin Books of Chapel Hill, 2011.

Edwin Keene has become something of a recluse after a tragic car accident in which one of the passengers was killed. The aristocratic Keene, son of a prominent local family, eases the pain of his own injuries with too-frequent doses of morphine. As his life appears to be slipping away, there is a sudden hope for redemption when Keene falls for Eureka Spaight, a local high-school girl whose working-class family is very different from his own. The novel is set in the early 1950s in the fictional eastern North Carolina town of Trent.

Comments Off on Michael Parker. Hello Down There. New York: Scribners, 1993.

The rural community of Trent, N.C., a fictional town between Fayetteville and Wilmington, is shaken when a local gay teenager is found murdered after a high school party. Thomas Edgecombe, owner of the town’s weekly newspaper, begins to report on the case and is horrified to learn that his two sons may be suspects. The Edgecombe boys do not help their case when they disappear, running away to Washington, D.C. The novel follows the three Edgecombes as they struggle to understand the crime, its consequences, and each other.

Michael Parker. If You Want Me to Stay. Chapel Hill: Algonquin Books, 2005.

With his mother gone, having abandoned the family, and his father ravaged by mental illness, fourteen- year-old Joel Junior is forced into adulthood. When their father becomes violent, Joel takes his two younger brothers and leaves in search of some way to save the family. The novel takes place in the 1970s in and around Trent, the same fictional eastern North Carolina town in which two of Parker’s previous novels were set. Joel narrates the story in a vivid first person, his worries interspersed with the music of the day running through his head.

Comments Off on Michael Parker. If You Want Me to Stay. Chapel Hill: Algonquin Books, 2005.