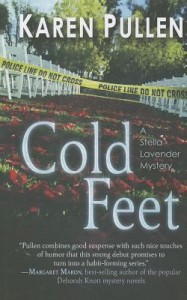 When Stella Lavender agreed to accompany her grandmother to a wedding, she didn’t expect to be pulled into a murder investigation.  Stella works for the North Carolina State Bureau of Investigation, and the undercover work she’s been doing has her interacting with all manner of drug dealers, drug runners, and addicts.  Although Stella hates putting on a dress, she is looking forward to an afternoon of good food, champagne, and polite company at an attractive country inn.  But Stella is not sooner settled in her seat when she notices a bridesmaid talking excitedly to the inn’s owner.  Something is amiss. When Stella goes to investigate she finds the innkeeper and bridesmaid huddled over the bride’s lifeless body.  The young woman clearly died an agonizing death.

Soon the local authorities are on the scene, and the investigation begins.  Stella is happy to aid local detective Anselmo Morales, but she is less than thrilled to be working again with her ex-fiancé, Hogan Leith, who is a fraternity brother of the bridegroom.  Several of the groom’s frat brothers came for the funeral, even one brother whose wife died tragically just months ago.  As Stella and Anselmo investigate the murder they find that the wedding included a passel of unhappy people: an ex-girlfriend of the groom, a couple who object to the bride’s profession, parents who try to impose their values on their adult children, and an innkeeper who believes someone is sabotaging his business. When the coroner’s report adds unexpected information about the dead woman, Anselmo and Stella have yet another avenue to explore.

Between the murder investigation and her ongoing drug squad work, Stella Lavender barely has time to exercise her mutt Merle (who was the subject of a bitter custody dispute with her ex-fiancé). Cold Feet is an action-packed start to a new mystery series.