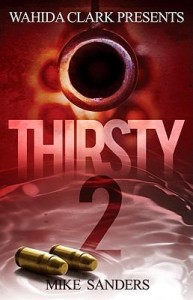 Justice Dial is back in this bloody sequel to Thirsty, Mike Sanders’s novel about hustling on the streets of Charlotte, North Carolina. Beautiful, clever, and ruthless, Justice used to make loads of cash by seducing men, gleaning the location of their wealth, and passing on the information to her brother, Monk. But then it all went wrong, and in a terrible case of mistaken blame, her murderous, drug lord ex-boyfriend Carlos came after the brother and sister. Monk was killed, but Justice fled to Chicago.

Now Justice owns and operates a successful strip club but has never stopped plotting her revenge on Tan, the vicious drug dealer who killed her brother. The situation heats up when Justice returns to the Queen City to support her best friend Sapphire, whose mother is dying. Sapphire was a victim of a nearly fatal beating when Carlos’s crew thought she crossed them, and Carlos has been making restitution ever since he discovered her and Justice’s innocence. Sapphire has forgiven him, but Justice refuses, so Sapphire sees her best friend’s return to Charlotte as an opportunity to convince her of Carlos’s sincerity.

Meanwhile, Tandora Mendoza, daughter of the Mendoza crime family, is out for her own revenge. Robbed by Justice, Monk, and their gang, Tan has already eliminated one sibling, and now she’s waiting for her chance at Justice…before Justice can get to her first. The two women stalk one another through Charlotte and finally Chicago, surrounded by their henchmen and women. But who can they really trust? In the end, a true enemy may be the one they least expect. Justice must survive the hatred of those who want her dead, while fighting the love of the one man she swore never to forgive.

Hustling in Charlotte, North Carolina, is a dangerous business; Justice Dial knows this. Still, she enjoys the perks – designer clothes and jewelry, a fancy car, a beautifully decorated home, and an endless supply of money – not to mention the thrill she gets from it. Her gorgeous appearance and quick wit make her a successful hustler: wealthy and well-connected men are distracted by her charms long enough for her to get necessary information. Justice then gives the important details to her brother, Monk, so that he and his friends can steal the men’s money and goods.

This time, however, Justice and Monk have gotten caught up with the wrong men. Monk’s new accomplice stole money from Carlos, a powerful drug lord who happens to be Justice’s ex-boyfriend. Carlos’s crew comes after Monk and Justice. The siblings fear for their lives so much that they decide to return to Chicago. Before they leave, Justice discovers that J.T., the handsome man she has been seeing, is not the nice guy she imagined. Justice gets her revenge, but going to war with Carlos’s gang changes her life forever.