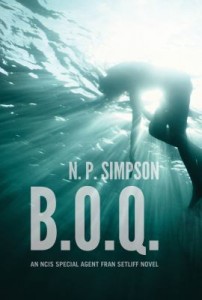 Fran Setliff left behind an unhappy marriage and a dead-end police job in a small Alabama town to become a Naval Criminal Investigative Service (NCIS) agent.  Now she is the newbie on the NCIS force attached to Camp Lejeune.  She thinks that she is fitting in, but as a civilian she still is getting used to the layers of command, traditions, and taboos of this large Marine base.  Being a woman doesn’t help.

When Fran becomes part of the team investigating the death of Ann Buckhalter she is immersed in the base and all the human dramas that play out there. Buckhalter had been a reporter at the Fayetteville paper when her husband was on active duty.  All her stories about the base had been positive, cheerful even, but the base commander and his staff were suspicious of her.  After her husband retired, the family moved to Raleigh, but Buckhalter and her teenage daughter regularly–but separately–came back to Camp Lejuene.  On one such visit Ann Buckhalter dies.  Is her death an accident, or is it murder?  Is her death connected to the sexual assault charges that her daughter made against an enlisted man, or the rumored lawsuit against base commander?  Or does it have something to do with a psychiatrist’s study of military families, or drug usage on and around the base?  Simpson’s complex story and well-developed main character will hold the reader’s attention.