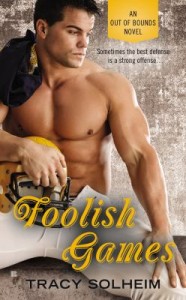 Will “William the Conqueror” Connelly is the poster boy for fairness and integrity. That’s why the discovery of an illegitimate son is such a surprise to Will and to those who know him. Having been born out of wedlock himself, Will never wanted to subject a child of his to that fate. Will is a starting player for the Baltimore Blaze NFL team. He is currently under scrutiny for having been involved in a scheme in which players took money to injure other players. This allegation involves so many players that the U.S. Senate has gotten involved. When called to a meeting with U.S. Senator Stephen Marchione, Will is prepared for anything but hearing that he has a son by the Senator’s sister.

Julianne Marchione is a professional bridal gown designer. Her business will provide her with more than enough money to take care of her son. A son who is the result of a one night stand at a client’s wedding, caused by a mixture of migraine medicine, fear of thunderstorms, and the comfort offered by a “smoking hot football player.” Julianne sees her son Owen as a gift of love and does not plan on sharing his existence with his father at all. But, Owen is born with an advanced hemolytic disease that calls for a blood transfusion. When Owen’s body rejects Julianne’s blood, Owen’s best bet is to have the blood of his father. So, Julianne must reveal Will’s identity and ask for his help in saving her son.

Willing to give every drop of blood for the life his son, Will does the transfusion and Owen is soon a healthy little boy. Julianne expected Will to make her pay for keeping Owen from him. However, she never expected that Will would demand that she marry him in order to make Owen legitimate. Of course the marriage is just for Owen, and the two will seek a separation in three months when Will has to go back to camp. But, moving into Will’s house together, in Chances Inlet, North Carolina, may be asking too much given the passion between Julianne and Will.

There may be passion between the two, but how can Will trust a woman who tried to keep his son from him? And what about the fact that her brother is head of the committee investigating him? Can Will trust her with his career and his heart?

Foolish Games is the second book in the Out of Bounds series, a series about players from a fictitious football team, the Baltimore Blaze.