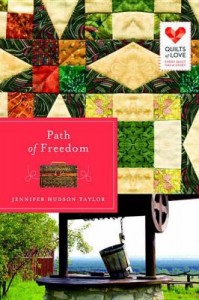 At eighteen, Flora Saferight has already developed a reputation as a competent midwife in her small community in Guilford County, North Carolina.  Such recognition would seem to indicate that she is mature beyond her years, but in fact, she is still impetuous and quick to take offense.  And no one offends her quite as much as Bruce Milliken.  Bruce teased Flora when they were young, and she is now ever on the ready for his next barb.  Bruce, who has long been attracted to Flora’s tempestuousness, has tried to make amends, but she has rebuffed every offer of a truce in their little war of words. But when Flora and Bruce are tapped by their pastor for a dangerous mission, the two young people must put aside their past.

For Flora and Bruce are part of a tight-knit Quaker community–a community that has been resisting the slaveholding society that they live in by ferrying men and women out of bondage to freedom in the North.  It’s  secret and dangerous work that both Bruce’s parents and Flora’s have done; they now want their children to take over their roles.  As Path of Freedom opens, Bruce has just returned from a trip to Indiana on the Underground Railroad.  Bruce has shown that he can handle the false-bottomwagon that hides his passengers and that he can withstand the hardships of the trip.  Flora has never done this work–and she did not know of her parents’ involvement in the Underground Railroad–but she is keenly needed for the next trip, because the passengers are a young man and his pregnant wife.  There is a chance that the woman will give birth while they are on the trip to Pennsylvania and that she will need the attentions of a skilled midwife to save her and her baby.

Because the young couple will be hidden, and it would appear improper for Flora and Bruce to travel alone, Flora’s sister Irene must make the trip too.  Irene provides some of the lighter moments in the book and acts as a go-between between Bruce and Flora as they work out their feelings for each other.  Although the dangers and hardship of the trip–suspicious landowners, bobcats, storms, bounty hunters–are portrayed, Path of Freedom, is at its core a romance in which the relationship between Flora and Bruce takes center stage.