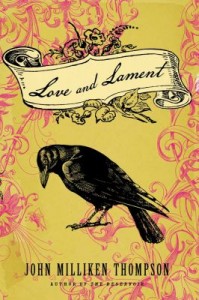 Death trails fast on the heels of the Hartsoe family. At age six, the youngest Hartsoe, Mary Bet, mistakes a circuit rider for the Devil. She cowers in the shadow of the Devil on horseback with hobnail boots and a black handlebar moustache. Soon after the encounter, Mary Bet’s eight other brother and sisters and her mother begin dying off, one by one, as if in a orchestrated funeral procession. Mary Bet believes that the Hartsoe family is cursed. But her generation and her father’s clutch to life during one of America’s more trying, transitional phases – Reconstruction.

Mary Bet’s father, Rezin Cicero, or R.C. for short, fought in the Civil War and wants to distance himself from the memories of battle. However, the constant reminder of his peg leg makes moving on a challenge. His miserly father, Samuel Hartsoe, withheld the family business from him. Samuel believes that R.C. should learn and labor to generate his own fortune. R.C. manages a general store and married one of William “Captain Billie” Murchison’s daughters, Susan Elizabeth. R.C. and Susan Elizabeth’s marriage tangles the family trees somewhat awkwardly. Samuel Hartsoe still feels lingering indignation that his father, John Siler, sold the Hartsoe family home to the drunken and vulgar Captain Billie rather than bequeathing it to him. As R.C.’s children and his wife die by a seeming string of dumb and simple misfortune, his faith flags. He rejects what others mourn as God’s will and he descends into madness. His youngest daughter, Mary Bet watches guiltily while R.C.’s body and mind decay. Love and Lament is a story concerned with the tension of family relationships, community exchanges, and constant hardships.

Meanwhile, Mary Bet, the story’s heroine, matures as the broken, war-torn South ushers in new industrialization and alterations in established values at the turn of the century. Mary Bet was born the year the railroad arrived in Haw County, a loosely fictionalized version of Chatham County. Mary Bet is a figure of the New South and a liminal character. She struggles to unshackle herself and move beyond the past. In her will, Mary Bet’s mother Susan Elizabeth deeds her jewels to her prettiest daughter, her silver to her most ambitious, and the family Bible to Mary Bet. Her mother’s gift appoints Mary Bet as the keeper of the Hartsoe family history. And fittingly so — Mary Bet is the only one of R.C. and Susan Elizabeth’s children to enter adulthood after all. From the rubble of the old world, Mary Bet emerges as a modern woman.

Novelist John Milliken Thompson spins a family saga rooted in the Southern Gothic tradition that spans from Reconstruction to World War I. The grief of the Hartsoe family echoes the changing climate of post-Civil War South. Thompson relates his story with mesmerizing and authentic detail that evokes great pathos for the Hartsoe clan. His rendering of Mary Bet from age six to age thirty rings true. With Mary Bet and the rest of the Hartsoes, Thompson accentuates how memory and history can haunt us, from the past long into the future.