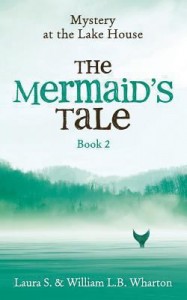 “No pessimist ever discovered the secret of the stars, or sailed to an uncharted land, or opened a new doorway for the human spirit” ~ Helen Keller

Jock Avery is back, along with his new friends Lynna and Chip Woodward. During their first summer together, the trio solved the mystery of Monsters Below Longleaf Lake in Moore County, North Carolina. Now there is a new mystery to discover. Seven-year old Chip, from his dock, has spotted a mermaid in the lake while Lynna and Jock are having a sailboat race. Lynna’s boat almost hit her! Although he suspects that they will never believe him, Chip still can’t help but to tell his friends what he’s seen. Jock quickly expresses his disbelief but is silenced by Lynna who defends her brother. This calls for an investigation!

The trio decide to search the lake using a grid pattern just like underwater archeologists. They draw out a grid in order to mark every spot they search and what they find there. The mermaid quest brings up some problems like their inability to dive but so deep. Soon, there is a discussion of deep sea divers and scuba tanks. Lynna and Jock have a contest to see who can hold their breath the longest underwater while Lynna and Chip’s mom times the two. Lynna wins! This leads Jock to want to join the swim team in order to improve his underwater breathing.

The search for the mermaid continues full force when Jock catches a glimpse of her at night–he no longer doubts Chip’s claim. However, will the grownups ever believe? Will the trio be able to find the mermaid in the lake? Jock turns to his favorite adventurer, Sam Justice, and his underwater adventures for inspiration on how to look for the mermaid. While the kids have a mission, the adults are planning an adventure of their own. The parents have been invited to a grand opening event and everyone is going. What surprise could be waiting for Jock, Chip, and Lynna at the event?

Co-authored by novelist Laura S. Wharton and her son William, The Mermaid’s Tale is the second book in the Mystery at the Lake House Series. This chapter book is intended for children aged 9-12; it includes lots of information on swimming, diving, fishing, and the importance of taking care of our water environments. Also included are instructions on how to build an underwater viewer, used by Chip in the book, and two interviews: one with the mermaid and one with William. This book encourages kids to believe in themselves and not be so quick to doubt others.  This is a book that kids will find enjoyable as well as informative. 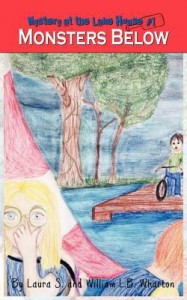 School is finally over, and vacation stretches ahead! Jock Avery has just finished fourth grade, and is looking forward to spending the whole summer at his grandparents’ lake house on Longleaf Lake in Moore County, NC. Jock has spent many happy summers there learning to swim, fish, water ski, and sail, but this summer he is a little sad. His busy parents won’t be able to join him much, and none of his cousins or friends will be able to visit. Jock figures he’ll be spending a lot of time with his favorite intrepid (fictional) adventurer, Sam Justice, when he discovers that a new family has just moved in next door: a single mom with two kids around his age!

Jock is excited to share the lake with his new friends Lyanna and Chip, but Chip is convinced there is a monster in the lake, and won’t have anything to do with it. Jock is sure there isn’t a monster in Longleaf Lake, but he has been hearing some strange screeching noises recently. Could there be a monster? Additionally, the kids have spotted their grumpy neighbor Mr. Harrison doing something mysterious out on the lake at night. If there is a monster…is Mr. Harrison feeding it? The trio decide to investigate, but their curiosity about what lies beneath the lake waters could end up with them in hot water. Or worse, eaten by a monster!

Co-authored by seasoned novelist Laura S. Wharton and her young son William, this first installment in the  Mystery at the Lake House series is a great chapter book for children ages 6-12. It also includes a wealth of information on bird watching for children, as well as recipes for some of the characters’ favorite foods. 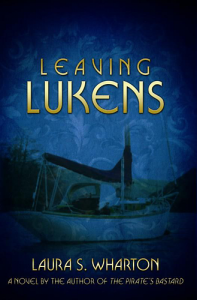 In June of 1942, Lukens is a small town on the North Carolina coast, and it’s getting smaller. Residents left first in trickles, but now they’re crossing the Neuse in a torrent to places like Oriental, with its modern conveniences and thriving community. Ella Marie Hutchins, seventeen, is dead set against leaving. Everything she loves is in Lukens: her house, her Grandmother, and her handsome boyfriend, soon-to-be naval officer Jarrett Migette. When Jarrett announces he’s leaving earlier than planned, and her mother decides that they’re moving, Ella is distraught. Leaving Lukens might be the safest idea, however, as the war is closer than anyone thinks. Walking alone near the tideline one evening, Ella is threatened by a vicious Nazi scout, and barely escapes unscathed. Luckily, she’s assisted by a young stranger named Griff, who just happens to be passing by. Griff’s story makes sense–he’s a recreational sailor and treasure-hunter, visiting his uncle in Lukens on his prize sailboat Susanna. Soon he and Ella are fast friends, and as they spend more time together sailing, biking, and picnicking throughout the long, hot, Lukens summer, they begin to feel more for one another. But Griff is more than he seems, and the secret mission he is bound to fulfill will push Ella into danger greater than she’s ever faced before.

Filled with sailing lore, secrecy, Nazis, and romance, Leaving Lukens is an exciting new adventure from the author of The Pirate’s Bastard.

Edward Marshall’s life in 1741 is a classic tale of the self-made man: by the age of twenty-four, he’s risen from a lowly orphan in Barbados to a master shipwright in  Brunswick, a bustling port town in the great colony of North Carolina. A possible lumber deal with the wealthy merchant Thaddeus Jenkins of Wilmington means that Edward will achieve even greater success; it doesn’t hurt that Jenkins has a beautiful daughter, either. In addition to being extremely pretty, Miss Sarah Jenkins is also smart and adventurous, and Edward is soon head-over-heels in love. But an old seaman in Merchant Jenkins’ employ, Ignatius Pell, thinks he knows Edward from somewhere else, and he  threatens to ruin the young couple’s future happiness by revealing  a dark secret Edward thought he left behind on Barbados. For Edward is not Edward Marshall, but the illegitimate son of the infamous pirate Stede Bonnet and his French mistress Anne Marie, a redheaded lady of the night who passed her crimson locks and steely blue eyes on to her baby son before she tragically died.

Ignatius Pell certainly has a long memory, and trapped in his twisted brain is the location of a rich treasure buried by Bonnet in the islands before his untimely death at the hands of the law. Since Edward has convenient access to many ships and may have a bit of the pirate spirit in him, Ignatius proposes that they set sail in search of the treasure, unless Edward would rather that Miss Jenkins and her father learn of his sordid family tree. What follows is a seafaring adventure of the best kind, but reader beware: just like quests for pirate treasure, pirate tales rarely end in a predictable, or peaceful, manner.