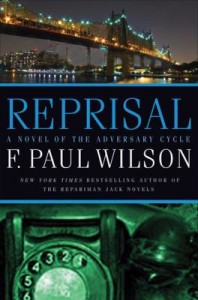 F. Paul Wilson’s Adversary Cycle, originally published between 1981 and 1992, has been updated by the author and is now enjoying a revival. The series begins in 1941, when an incomprehensible evil whom we come to know as the Adversary is released among a group of Nazis in the Romanian wilderness. Over the course of the next four novels a wide cast of characters develops, all of whom are affected by this evil, either joining the fight against it, or falling to its dark power throughout the course of the 20th century. Reprisal, the fifth novel in this horror series, sees the Adversary rise again to seek revenge against those who tried to vanquish him in times past. The sixth and final novel of the series, Nightworld, is due to be republished in 2012.

Will Ryerson of Pendleton, North Carolina, is in reality Bill Ryan, a defrocked Jesuit priest from New York City. Years ago, a horrifying murder caused him to flee Manhattan and go into hiding in the small college town of Pendleton. Although reclusive, he has developed a good life for himself as a groundsman at Darnell University. Will reads Kierkegaard and Camus, performs small repairs and maintenance, and stays as far away from telephones as he can. If Will gets too close, the continuous ringing starts, followed by a terrified child’s screaming voice. Ryerson’s sole friend and companion is Lisl, a young, insecure assistant professor in the math department. But when she is seduced by the strangely magnetic Rafe, a graduate student in psychology, Will becomes concerned. Meanwhile, Sergeant Augustino of the NYPD thinks he has a lead on a long-missing child molester, and will stop at nothing to bring him to justice.

A complicated web of horror, seduction, and betrayal, Reprisal is a gripping glimpse into the mind of the ultimate evil in the tradition of The Exorcist.