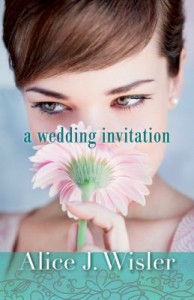 When Samantha Bravencourt misinterprets a wedding invitation and lands up at a stranger’s nuptials in Winston-Salem, North Carolina, she’s embarrassed and annoyed. Still, the trip gives Sam the chance to visit her eccentric Aunt Dovie, and to get away from working in her mom’s D.C. fashion boutique. What she doesn’t count on is the past returning to haunt her with a vengeance.

When Samantha last saw Lien Hong , it was nearly a decade earlier, and Lien was Sam’s student at the Philippine Refugee Processing Center near Manila. In 1985, many Vietnamese, Laotian, and Cambodian families were trying to immigrate to the United States. The teachers at the PRPC taught them English and American culture, attempting to ease their transition. Now Lien and her family are in Winston-Salem, and she is thrilled to find Samantha. Sam isn’t sure how she feels about their reunion. Lien was a handful then, and obsessed with the man Sam had a crush on–her handsome fellow teacher, Carson Brylie, also a North Carolinian. Carson broke Sam’s heart, and she would rather not be reminded of him or this part of her past.

But she doesn’t have much choice when Carson hears about her presence, and calls. Soon he’s back in her life, and as confusing as ever. Sam doesn’t know what Carson wants, but she does know that she won’t be so fast to give away her heart a second time. Unfortunately, since Lien needs both Sam and Carson’s help badly, Sam can’t avoid him. The young Vietnamese is an Amerasian: the daughter of a Vietnamese woman and an American G.I. Ridiculed and stigmatized, Lien’s mother gave her up to relatives as a baby, and fled. Now Lien is getting married, and wants to find her birth mother more than anything. As Samantha and Carson spend more and more time together in an effort to unite a family, Sam learns that the surest path to happiness lies in learning to trust herself, others, and God once more.

Jackie Donovan is about to turn thirty and she still has not realized her two life-long goals: to be married to her soul mate and to own and operate a bed and breakfast at the old Bailey House. When she interviews Davis Erickson, a local Outer Banks real estate agent, for a magazine article, Jackie finds a charming, handsome bachelor who also happens to be the owner of the Bailey House. She shares her interest of the property with him, and they begin seeing each other. When Davis decides that Jackie has the right passion for the Bailey House, he offers her a rent-to-buy option. The catch is that she and Minnie, her best friend, must agree to run it exactly as his grandparents, the Baileys, had. The two women had been fond of the Baileys and are happy to continue their traditions, such as serving their special lemon cookies.

Just when Jackie begins to think that her situation is too good to be true, she realizes that it is. She catches Davis cheating on her, and her close friend, Buck, gives Jackie evidence that Davis is a dead-beat landlord. She enlists the help of her devoted family members, friends, and co-workers to expose Davis’s crimes. He quickly cowers at the threat of a damaged reputation and agrees to properly fix up the house. At last, just a few months after turning thirty, Jackie finds herself falling in love with Buck and the proprietor of the newly reopened Bailey House.

Like a number of other fictional heroines, Deena Livingston retreats to the North Carolina mountains after her heart is broken in the big city.  Deena plans to keep to herself as she sorts out her life, but her late grandfather has made other plans for her.  Deena can have Grandpa Ernest’s cabin and a small inheritance if she works six months in the after-school and summer programs that grandpa funded at the local Presbyterian church.  Teaching cooking to preteens takes Deena into new emotional territory.  Learning about the troubled histories of these children and seeing their potential prompts Deena to put her own problems into perspective.  Her growth is helped along by two brothers, Jonas and Zack, one of whom provides the romantic interest.

Comments Off on Alice J. Wisler. How Sweet It Is. Minneapolis, MN: Bethany House, 2009.

Nicole Michelin lives a quiet life in Mount Olive.  Nicole’s parents were missionaries in Japan when her mother died.  Nicole remembers very little about their time there, but she has an abiding aversion to all things relating to Japan.  Nicole’s a school teacher now, happy to help out her grandmother and aunt who had so much to do with raising her.  Work, family, and an interest tropical fish–this fills up Nicole’s life.  Things start to change when a man in Japan responds to one of Nicole’s columns on the Pretty Fish website.  Harrison wants to meet Nicole and asks her to come to Japan.  Although hesitant to accept, Nicole senses that this is a chance both to deal with the tragedy of her childhood and to explore a different future. Nicole’s faith and her grandmother help Nicole take this big leap.  Nicole is a likable character; the first person narrative draws the reader into her story.