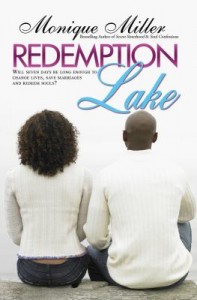 And it was all relative when she thought about it; a person’s perception was truly their reality.

Marriage is a two-way street, and it takes plenty of effort and patience to resolve disputes and stave off conflict. Problems can erupt from a single source and branch off to create additional complications. Often, it’s tough to definitively pinpoint who is right and who is wrong. Redemption Lake covers three couples struggling to support their marriages. The spouses here have been pushed so far they can barely manage to talk to each other without contempt or anger, let alone hear what the other person is saying.

Readers of Miller’s work will recognize Phillip and Shelby Tomlinson, characters from her first novel, Secret Sisterhood. In Secret Sisterhood, Shelby and Phillip confronted their marital difficulties. After attending a marriage counseling retreat and helping with the couples’ ministry, Phillip has been tasked with leading a week-long retreat at a mountain resort for three couples, and Shelby has come along to help. Phillip is worried that he isn’t skilled enough to facilitate effective communication between the couples and guide them through their problems to a successful resolution. Based on the general profiles of each couple, this isn’t going to be an easy week for anyone.

Charlotte Knight has been collecting proof of her husband Xavier’s infidelities meticulously. She knows, in secret, that Xavier visits a number of diverse sources to stray, from the Internet to a neighbor down the street. The news of her positive STD test was the final piece of evidence that pushed her over the edge. Beryl Highgate is fed up with her lazy husband Travis. He promises to find a job and pull his weight, but he never delivers. She’s exhausted from taking care of their children, their finances, and him. Something has to change. Beryl can’t take his excuses any longer. Pastor George Jones was surprised and embarrassed to learn of his wife Nina’s hidden gambling problem. Recently, he’s found out that her addiction has affected not only their finances, but also those of his church in Greenville, North Carolina. He has to find a remedy before her gambling destroys both of their lives.

Phillip knows that there are always three sides to any story: “his side, her side, and the truth.” Novelist Monique Miller structured Redemption Lake so that readers will see the stories of the three couples from all angles. The novel is organized with brief prologue documenting the surface grievances of each couple. The remainder is largely broken up in chapters that rotate between the three husbands and Phillip, followed by the three wives and Shelby. Miller concludes with “the truth” as seen through Phillip’s eyes, observing the end of the retreat and the final outcomes among the couples. Miller doesn’t gloss over her characters and write a neat, happy ending for every couple. She sticks closer to the side of realism, where sometimes things work out but sometimes things are too far gone to fix.

Law enforcement is not an easy job. Especially when dealing with criminals who will kill. Or when the offenders are high-level politicians, government officials, and business executives. Add money, national security, and ego to the mix, and police work is a very dangerous field. For Mike Saville of the F.B.I. and Lowri Pritchard of the U.S. Park Police, these are moot points. Both individuals will test the limits of their careers in order to get to the bottom of difficult cases.

Although Saville and Pritchard do not know each other, they are working on the same case. A series of suspicious deaths, officially ruled suicides, occur both in Saville’s (fictional) Kendall County (near Pitt County), North Carolina, and Pritchard’s Washington, D.C. Because the victims’ autopsies suggest self-inflicted wounds, the cases are supposed to be off-limits to Saville and Pritchard. However, they believe that something more sinister has occurred. By the time their victims’ connections unite the officers, each is in the midst of a perilous situation. Saville is beginning to uncover a multimillion dollar anti-terrorism deal gone bad, and Pritchard has connected a colleague to the killings and cover-ups involved in that tainted agreement. The information that they share with each other makes them even more unsafe. When Pritchard’s co-worker discovers what she has unearthed, he holds her captive and tortures her. Saville comes to her rescue. Their agencies officially get involved, and the criminals are arrested. Saville and Pritchard’s perseverance helps them get to the bottom of high-stakes crimes, protect national security, and find each other.

Some readers may be uncomfortable with Spence’s graphic descriptions throughout the novel. The torture scene is especially disturbing.

Zoë and Mr. C’mere approach people the same way.  Both are skeptical and skittish of others.  Both are fiercely independent and would be more than happy to live alone.  Both have been described as “feral.”  However, there is one distinction: Mr. C’mere is a cat, as one might assume, but Zoë is an eleven-year old girl.  Zoë Royster’s short life has been full of uncertainty and instability.  Her mother, who has just passed away, was mentally ill and neglectful, and Zoë never met her father.  When her paternal uncle Henry (who Zoë had never even heard of) comes to the hospital in Farmville to take her home with him, Zoë is distrustful of the new adult in her life.  However, Henry, a renowned sculptor and former successful naval cardiologist, is different.  While he does make her go to school for the first time, he also provides her with a secure home life and compassionate grown-up friends.

This new home includes Mr. C’mere, who wearily befriends Zoë, although it takes time and coaxing.  Zoë’s explorations of  the woods behind Henry’s home leads her to a forgotten cabin and a mysterious boy who roams the forest with a beautiful, rare albino deer that he calls “Sister.”  The bizarre boy watches over Zoë and his desire to protect her gets them both into some trouble, but it ultimately teaches Zoë the value of family in ways she’s never imagined.