Matt Tomlinson came to Kingstree Island decades ago.  He had little, but he was good with money and he had an eye for opportunities.  He began as a shopkeeper, but he quickly expanded, buying fishing boats and the debts of local fishermen.  With his business sense and his drive, he came to own the fishing fleet, the ice house, the power plant, and a controlling interest in the island’s only hotel.  He is the big man on this remote island, and he is used to having the locals defer to his wishes.

But Tomlinson is uneasy.  He has lost his eyesight and he knows the years will continue to diminish him.  When Brandon Rhodes arrives on the island, Tomlinson senses the presence of someone like his younger self.  After his initial attempt to force Rhodes off the island fails and Rhodes attracts the interest of a few independent-minded islanders and the attractive Marsha Harris, Tomlinson vows to crush the interloper.  The struggle between the two men plays out in this isolated community among people who must bend to the weather but who come to realize that they don’t need to bend to the will of one man.

Fortune. Scandal. Romance. Debauchery. Together, they seem like the perfect  ingredients for a surefire box office hit.

No wonder Robert Wilder’s 1946 novel Written on the Wind was selected by Universal International Pictures for its racy plot-line that loosely depicts elements of Zachary Smith Reynolds’ marriage to Libby Holman and suspicions surrounding his suicide. Wilder’s novel was reviewed previously on the blog here. Reynolds’ life and his relationship with Holman also inspired another, earlier musical from 1935 entitled Reckless, which starred Jean Harlow.

The screenplay, which was not adapted by Wilder, revised three key components. All of the characters’ names change. The family tobacco fortune transformed into oil in the film. And, perhaps most significantly, the setting is relocated from North Carolina to Texas. The core focus of the story remains intact — two self-indulgent and self-destructive siblings, a disappointed father, and complicated romantic attractions — and there are many similarities between the two versions, but there are also noticeable absent or altered details.

In the translation from page to screen, Laura Whitfield’s character (mother of Ann-Charlotte and Cary) was lost. Marylee and Kyle’s mother isn’t present. Additionally, Lilith/Lucy is recast from actress to secretary. Despite the change, her character serves the same purpose. The deaths of Cassius/Jasper are different in style, but related in their connection to their daughters. And the endings, novel versus film, are quite different.

The film adaptation, directed by Douglas Sirk, starred Hollywood heavy-hitters like Rock Hudson and Lauren Bacall, as well as Dorothy Malone, Robert Stack and Robert Keith. German director Douglas Sirk worked on eight films with Rock Hudson and was known for his melodramas and use of vibrant colors. Written on the Wind was filmed in lush, bright Technicolor and is noted for its artificial appearance and flamboyant performances. Although he reached great commercial success during his career, Sirk only gained greater critical appreciation two decades later, during the 1970s. Written on the Wind was nominated for three Academy Awards and one Golden Globe. Dorothy Malone won the Academy Award for Best Supporting Actress for her portrayal of Marylee, the sultry daughter of an oil tycoon.

Comments Off on Lights, Camera, Novel: Robert Wilder’s Written on the Wind. 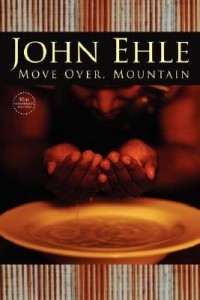 Pa Cummings wanted his sons to go north.  The segregated South in the mid-twentieth century held limited opportunities for African American men.  All of his son did go north except Jordan, who married young.  Jordan has made a life for himself, with a wife and two sons, but you can’t say that he’s gotten ahead.  He’s worked at a number of jobs, but as the novel opens he’s lost his job delivering coal.  He’s also gambled away his wife’s savings.  Just as Jordan is hitting bottom, his brother Bryant returns from the North.  Bryant has money and opinions, and he seems to be interested in playing the big man to Jordan’s wife and sons.  Sibling rivalry helps Jordan harness his ambition, but he is not prepared for the lengths to which Bryant will go to defeat him.

John Ehle wrote this book when he lived in Chapel Hill, and the fictional Leafwood and Tin Top are widely thought to be modeled on Chapel Hill and Carrboro.

Press 53 of Winston-Salem published a 50th anniversary edition of Move Over, Mountain in 2007. The cover art in this posting is from that edition.

As a young man, Wilford Hollester was a good student with no particular sense of purpose, but when his mother dies, his life changes.  Shocked by her death and touched by the kindness of the local bishop, Hollester becomes a minister. This novel follows him through seminary and as his begins in ministry in several mill towns in the North Carolina Piedmont.  By meeting personal and professional challenges he becomes a better person and more secure in his vocation.

Comments Off on Frank A. Clarvoe. The Wonderful Way. New York: Henry Holt and Co., 1956.

In this novel for children, the arrival of a traveling peddler breaks the tedium of a small mountain community. Peddler O’Halloran has the usual array of goods for sale, but he is also a fiddle player who entertains as well as sells.  The  McCrary family enjoys his company, and when he leaves young Angeline gives him a comforter with a pattern on it that she calls “Fiddler’s Fancy.”

This installment of Inglis Fletcher’s Carolina Series is set in Edenton, North Carolina during the late 1780s.  Political tensions run high in North Carolina after the colonies gain independence and the Federalists and Anti-federalists debate ratifying the Constitution.  Adam Rutledge and his wife Mary are highly respected political and social leaders in their community, but when Adam returns from an extended visit to Illinois with a different political perspective the couple goes through a stressful period.  Old friends (and North Carolina greats) like Samuel Johnston and Jemmy Lenoir are not pleased with Adam’s new politics. Mary has been in ill health, and the distance between Mary and Adam is compounded by Mary’s devotion to the plantation – Queen’s Gift – that has been in her family for years, while Adam has a vested interest in the success of the western territories.

With the help of new friends Sylvia Hay and Angus Moray, Mary’s health is restored. Adam’s demand for a Bill of Rights helps North Carolina ratify the Constitution and join the Union.  When a late brewing hurricane causes great damage to Queen’s Gift, Mary takes it as a sign to turn her sights to the West.

The Clabos are unconventional people living in the northwest corner of North Carolina (possibly Watauga County). The father, Lute Clabo, had been a fundamentalist preacher but now he’s an atheist. Mother Salie has also left any pretense of religion behind, but their daughter, Georgia, took a shine to the local Episcopal priest and has gotten mighty religious.  The two Clabo boys have left home–Earl marrying up and moving out, Hugh going to college and then the merchant marines.  It’s Hugh’s return that shakes up the family and the community as Hugh’s affairs scandalize all in this novel of family tensions, working class anger, and violence.

Comments Off on May Dikeman Hoss. The Pike. New York: Appleton-Century-Crofts, 1954.

Burgess Leonard. Phantom of the Foul-Lines. Philadelphia: J. B. Lippincott, 1952.

A new college basketball season is just around the corner, so it’s an appropriate time to add this novel to your reading list.

Mickey Barton was the captain of his high school basketball team–a team that won the state championship and a national invitational tournament.  That should make him a hot prospect for the premier basketball colleges in his state.  But Mickey has a problem–he is only 5′ 6″.  The big time schools rebuff him, and his best friend and teammate 6′ 10″ Hub Duncan trades his friendship with Mickey for a chance to play for an elite coach.  Mickey, whose dad is dead, needs a scholarship to attend college.  Luckily, his high school coach becomes the basketball coach at Greyling Tech, the perennial cellar dweller in the conference.  Mickey joins Coach Royce there.  Despite the ragtag nature of the team and bad behavior by the coach’s son, they go on to glory.

Mickey’s college, Grayling Tech, is thought to be Wake Forest, but I could not identify any of the schools in the conference.

Comments Off on Burgess Leonard. Phantom of the Foul-Lines. Philadelphia: J. B. Lippincott, 1952.

Inglis Fletcher. The Wind in the Forest. Indianapolis, IN: Bobbs-Merrill Co., 1957.

Both Royal Governor William Tryon and the Regulator insurrection are well known to students of North Carolina history.  In this novel, Inglis Fletcher retells these familiar stories through the actions of Hillary Caswell.  Caswell is a Marylander by birth, new to North Carolina, but wealthy and well connected (his cousin Richard is the speaker of the North Carolina Assembly).  As the novel opens, Caswell is making plans to go to New Bern where he will join Governor Tryon’s administration.  Although the complaints of his kinsmen and the allure of Cecelia Chapman should have kept him in Tyrrell County, Caswell goes on to New Bern and from there into the fray of late colonial unrest and the fateful Battle of Alamance.  As with most of Fletcher’s novels, historical figures like Tryon, Harmon Husband, and Edmund Fanning are integral to the story.

This is the ninth novel in Fletcher’s Carolina Series.

In this novel, set as the Revolutionary War is drawing to a close, follows Ross Pembroke, a patriot who has just escaped from the British in Charleston.  Pembroke began his service in the North, but the war has taken him south and for most of the novel he shuttles between the bases of patriot officers in North and South Carolina. He also finds time to pursue and protect the tempestuous Dorande van Kortenaer, a beautiful refugee from the island of St. Eusebius.  Historical figures such as Nathanael Greene and Francis Marion figure in the narrative, but this novel is very much in the tradition of the historical romance.