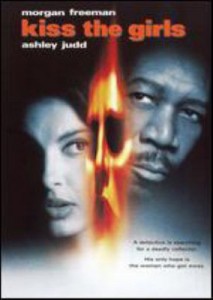 James Patterson’s Alex Cross series was perfectly timed for moviegoers of the nineties who were primed for psychological thrillers after a number of popular hits. Reviewers drew comparisons between Kiss the Girls and other releases like Silence of the Lambs and Se7en. However, the comparisons between the films were not entirely favorable. Kiss the Girls starred Morgan Freeman and Ashley Judd, whose career was just beginning to accelerate.

The novel follows forensic psychologist Alex Cross as he learns that his niece Naomi, a law student at Duke, was kidnapped by a lascivious serial killer who masquerades under the pseudonym, Casanova. Cross abandons DC for Durham. His emotions are high and he is focused on finding Naomi before it’s too late. Meanwhile, medical intern Kate McTiernan is Casanova’s latest victim, but not for long. McTiernan manages to escape, which makes her the anomalous sole survivor. She and Cross team up to uncover Casanova’s true identity and rescue the other victims still languishing in Casanova’s “harem.”

Kiss the Girls is Patterson’s only novel that features a North Carolina setting. But Patterson layered plenty of authenticating detail in his book to evoke the Raleigh-Durham-Chapel Hill area. Filming locations for the movie adaptation were largely limited to Durham, and of course, Los Angeles. The University of North Carolina at Chapel Hill did not to approve the film’s request to use the university’s campus during shooting.

In the past, the University has a mixed record of accepting some requests to film on campus, but rejecting others. According to a Daily Tarheel article from 2001, UNC’s major ruling factor is maintaining the University’s image. The University also considers how the project might provide opportunities or disruptions to campus life. Ultimately, the University decided against Kiss the Girls due to its graphic content. Chapel Hill officials did not consent to give the producers permission to shut down Franklin Street for filming.

Although Kiss the Girls is second in the Cross series it was adapted first. Along Came a Spider, the first novel in the series, was a follow-up in 2001. While Kiss the Girls performed well at the box office, critics panned the film for pacing issues and a lack of uniqueness. Both Freeman and Judd were commended for their performances however. In 2012, Tyler Perry starred in an Alex Cross reboot. There are plans for a sequel reportedly.

The movie version is a bit more solemn than the novel. In the book, Kate’s introductory remarks are self-deprecating and elicit a few smiles. More or less, the monologues match up.  But both versions represent Kate as a strong and intelligent character, in spite of her ordeal.

Ruth and Priscilla (Pril) were friends and neighbors for a decade. The women came and went in each other’s houses without knocking, they traveled together, their children played together, and they traded babysitters, advice, and confidences.  Pril knew that Ruth was worldly, a bit unconventional.  Despite their differences, the two women shared an uncommon emotional intimacy. Or so Pril thought.  When Ruth inexplicably leaves her husband and her home in Greensboro, Pril is stunned. She had no sense of Ruth’s unhappiness and no warning of what Ruth was about to do.  Pril’s private sorrow turns to alarm when Ruth’s husband subpoenas Pril to testify in the custody hearing for the children he and Ruth share.  As Pril prepares for her role in the case, she reviews her friendship with Ruth.  This is Susan Kelly’s first novel; posts for her later novels are also on this blog.

Although time-traveling Claire Fraser knows that the Revolution is coming, she and her husband Jamie decide to make a new life in the American colonies. They make their way from Charleston to Cumberland County, North Carolina, where Jamie’s wealthy aunt owns a plantation, and then eventually travel to the mountains where they begin setting up a community on the fictional Fraser’s Ridge. Their daughter, Brianna, is living in 1960s Boston, but she goes back in time to find her parents. Roger, her friend and would-be husband, follows her. This is the first book in the 2nd Outlander trilogy and the first of the series to take place in North Carolina.

Professor Simon Shaw knows everything there is to know about Kenan College’s Bloodworth House–in fact, he literally wrote the book on the historic home. So, when a 50-year old corpse with a bullet-hole in its skull is uncovered during an archaeological dig on the house’s grounds, Shaw is asked to help identify the body. He believes that the body is that of an heiress who disappeared in 1926 and tries solve the murder with the help of an archaeologist and a police attorney. This novel is full of Raleigh history, but Shaw’s life also includes a number of modern-day details that may be familiar to locals, including going to a Durham Bulls game, eating at Raleigh’s Hillsborough Street IHOP, and researching in UNC’s own Southern Historical Collection.

Casey Jones wants to be a private detective, but due to a felony conviction in the distant past she cannot get a license. Instead, she does the next best thing and works for a legitimate P.I., answering his phone, bodyguarding, and doing the legwork on some of his cases. In Legwork, the first novel in the Casey Jones series, Casey’s bodyguarding client is arrested for murdering a powerful and lecherous real estate developer. The arrestee is political candidate Mary Lee Masters–a “New Southern Woman” who could be the first female U.S. Senator from N.C–and she offers Casey twice her normal pay to find out who’s trying to frame her.

In Killer Market, the fifth installment in the Judge Deborah Knott series, Deborah takes a break from her home in fictional Colleton County and travels to High Point to serve as a substitute judge for a vacationing colleague. Unfortunately, the Judge’s arrival coincides with the start of a giant, week-long furniture event and she is without a hotel reservation. Inconvenience quickly turns into something much worse, however, when she is told that her missing purse has turned up at the scene of a murder and that the victim was killed with her medication. As she begins investigating the crime, Deborah is faced with a variety of quirky characters and two main questions: Who killed the furniture executive? And why did they try to frame the Deborah?

When Hallie Knight receives an invitation to visit Topsail Island, she accepts, viewing it as a welcome opportunity to take a break from her California life and her unfaithful husband. The visit is not a simple one, however. The invitation was extended by Captain Trench, the wealthy and ill grandfather of Hallie’s old friend Susan. Susan disappeared from her home two years ago and the Captain wants Hallie to find out what happened to her. As Hallie becomes more involved with the family and its secrets, she discovers that some relatives stand to inherit a fortune if Susan stays missing and decides that people know more than they are telling about the disappearance.

Born at the turn of the twentieth century, Selena “Sippy” Wright lives in North Carolina’s Great Smokies, with her parents. After a fire destroys the family’s cabin, they go to live with Sippy’s Grandmother and her youngest three children, and, while life on Utah Mountain is hard, the family struggles and survives together. Sippy’s story is filled with the work, school, and play of mountain children, but also includes details about her father’s work, her mother’s housekeeping, her grandmother’s medicinal herbs, and the events, songs, and games that were important to mountain culture. Based on the journals and recollections of the author’s mother, this novel tells the story of Sippy’s childhood from ages seven to twelve; her story is continued in Scearce’s second novel Cotton Mill Girl, published in 2006.

Cold Mountain is the story of Inman, a deserter from the Confederate Army, and his long journey home to the mountains of North Carolina during the last year of the Civil War. The novel alternates between Inman’s struggles and those of Ada, who is at home near Cold Mountain and is able to get by only with the help of Ruby, a mountain woman unafraid to fend for herself. Cold Mountain, winner of the National Book Award in 1997, has been praised for its accuracy in portraying geographical and horticultural details, as well as the particulars of nineteenth-century life in the North Carolina mountains. The book also inspired the 2003 Oscar-winning film of the same name.

Jack Umstead is a professional con man and a fugitive from the law. When he first shows up here, he has just arrived in the small town of Listre, N.C., where he’s working on an elaborate scheme, but first, he must earn the trust of the residents. The story is told by a number of narrators, including Umstead himself and some of the people he has taken in. The result is a full and comic portrait of Listre, a fictional town in eastern North Carolina, which is the setting for several of Edgerton’s novels.