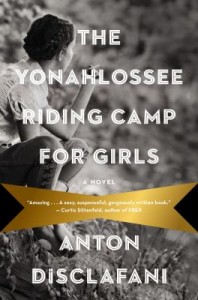 Thea Atwell has done something terrible. What teenaged Thea has done exactly is not clear, at least not right away. However, it is certain that Thea’s shameful actions have caused a rift in the Atwell family, so much so that she is shipped hastily from her insulated home near Emathla, Florida to the Yonahlossee Riding Camp for Girls in Blowing Rock, North Carolina in the middle of the summer.

The sudden separation is a shock for Thea. Before her relocation, she lived in virtual isolation. Her family resided outside of town and Thea had few regular interactions with other people aside from her mother, father, twin brother, Sam, and a handful of immediate relatives. She feels acute pain and longing in her separation from Sam, her primary companion, in particular. Her absence severs their deep bond as twins.  Upon and following her removal from her home, she questions the endurance of her family and their connection to each other.

The novel is set in 1930, during the difficult years of the Great Depression. Thanks to the Atwell citrus farm though, Thea’s family has remained largely unscathed by financial burdens. They are not necessarily wealthy, but they are comfortable for sure. If not for her indiscretions, Thea might have continued without much notice of the Depression. Not until Thea is removed from her home does she begin to notice traces of financial insecurity and become more acutely aware of class differences surrounding her.

Not surprisingly, the transition to the Yonahlossee Riding Camp, or YRC, is abrupt and disorienting for Thea. Everything at YRC is different from Florida: the land is mountainous rather than flat, the camp is populated by girls and Thea is unaccustomed to female friendship. The lifestyle and attitudes at the camp are quite alien to Thea as well. Although Thea is from the South geographically speaking, she does not feel Southern culturally, and she displays emotions of inferiority in her new locale.

The fact that gossip clings to Thea, due to her mid-season enrollment, does not help her acclimation either. Nevertheless, she is befriended by a popular girl named Sissy who helps her through the social minefields of the camp. Despite Thea’s alliances, she is still snubbed by girls from more fashionable areas like Memphis and Atlanta and she develops a rivalry with Leona Keller, the top rider at the camp. Apart from Sissy, horses help Thea adjust to her surroundings. She is an expert rider. Her fearlessness for riding and her competitive nature benefit her in the ring. Novelist Anton DiSclafani’s equestrian background is apparent in her writing.

DiSclafani does not reveal the specifics of Thea’s inappropriate behavior up front. Instead she chooses to gradually reveal the details of Thea’s scandal alongside her arrival at YRC so that the two stories are intertwined with heavier suspense. The novel’s setting almost appears tangible with its atmospheric description. Indeed, the world of YRC is so lucid and authentic that it could believably exist off the page. Much like Thea’s sheltered life in Florida, YRC seems to be shielded at large from the world suffering at the hands of the Depression. But DiSclafani hints that the bubble that YRC and its occupants exist within might not be as protected as it appears. Currents of change are manifested throughout the story in both possessions and customs. Moreover, Thea is in for another surprise when she discovers that YRC is more than just a riding camp… 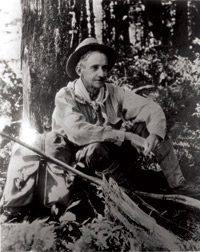 Horace Kephart on the summit of Mount Kephart, courtesy of the National Park Service

Horace Kephart, known as one of the fathers of the Great Smoky Mountain National Park, was a prolific writer and naturalist. He is well known for his nonfiction works on camping and the inhabitants of the southern Appalachians, but it was not until 2009 that his great- great-granddaughter and her husband were able to publish his long-lost novel, Smoky Mountain Magic. Originally written in 1929, the novel draws deeply on Kephart’s years of experience living in and wandering through the Smokies.

It’s 1925, and a young man from New York arrives on the outskirts of Kittuwa (Bryson City) in the Smoky Mountains. John Cabarrus has been away for fifteen years, but has finally returned to claim the land that is rightfully his. But his property is still in possession of the wicked W. G. Matlock, the greedy businessman who stole it from Cabarrus’ grandfather, so John must keep his intentions secret. Unfortunately, a local troublemaker sees Cabarrus on the property, possibly panning for gold. Matlock finds out, and goes after the prodigal son with a vengeance.

Marian Wentworth, a young woman visiting relatives in Kittuwa while on holiday from college, is immediately drawn to the mysterious, handsome Cabarrus. She soon discovers his family’s sad tale, and Cabarrus tells her the whole truth- he isn’t searching for gold, but for beryllium, uranium, and other mineral deposits in high demand as science advances. If he can find enough, his career and fortune will be made and he can regain his grandfather’s prized land from the scheming Matlock. Marian is determined to help, so the two young people search the mountains together for this precious treasure. Along the way, they encounter witches, the Little People, gum-chewing teenagers, mythical beasts, ornery dogs, the Cherokee, and magical crystals.

In this fascinating glimpse into the colliding cultures of the Roaring Twenties and the still wild back woods of the Great Smoky Mountains, Horace Kephart has written a masterful portrayal of the mountain folk, the Cherokee, and the land itself. Readers of adventure, natural science, and early twentieth century literature will all be delighted.

Check this title’s availability in the UNC-Chapel Hill library’s catalog. 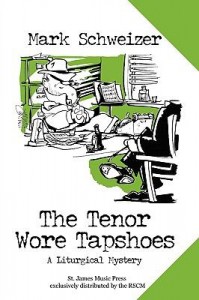 With writing that compares the rustling of a woman’s gown to the sounds of a cockroach rooting in a sugar-bowl, it’s safe to say that Police Chief Hayden Konig will never join the greats of American literature. Still, he insists on trying, even purchasing an old typewriter that once belonged to Raymond Chandler. Mr. Chandler, and his pipe, even show up on occasion to compliment Hayden’s efforts. Poor prose and ghostly sightings notwithstanding, Konig is an excellent police chief, and a talented organist at St. Barnabas Episcopal Church in the small, sleepy mountain town of St. Germaine, North Carolina.

Hayden has just settled in from his last crime-solving adventure, which included the theft of a valuable diamond, a dead chorister, and multiple trips to England. You’d think that life would resume its leisurely pace, but this is just when St. Germaine chooses to get…interesting. First, there’s the body that parishoners discover hidden in the altar at St. Barnabas. Next, the local bakery produces a miraculous cinnamon bun in the shape of the Blessed Virgin Mary, which is soon stolen. Poor Hayden loses a bet with his beautiful girlfriend Meg, and is made to enroll in a program designed to help him discover his religious masculinity, known simply as the Iron Mike Men’s Retreat. As if this weren’t enough, an itinerant preacher blows into town with his large revival tent and a feathered assistant known as Binny Hen the Scripture Chicken, who helps him select passages from the Bible.

Reeling from the amount of insanity a small town can apparently inflict in such a short time, Chief Konig somehow also finds time to be troubled by the arrival of a charming attorney called Robert Brannon, who immediately worms his way into everyone’s heart, and the very center of church politics. Hayden is also perplexed by the crimes that have sprung up throughout the community–very specific crimes that seem to follow a popular hymn depicting the trials of the saints. Will Konig solve all, or any of these mysteries? More importantly, will he have time to pay attention to what, or who, really matters? And will she say yes? 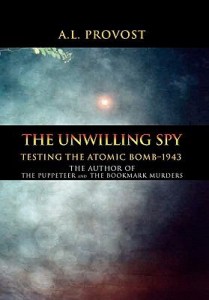 It is 1943, and the atomic arms race is on. In Los Alamos, New Mexico, physicists labor night and day to develop the first atomic bomb … and nearby German spies observe them. In this fictional account of espionage and murder, German, American, and British agents are embroiled in a battle of wits to uncover scientific secrets first, before the enemy has a chance to gain the advantage.

The tale begins in Santa Fe with Gunter Fleiss, cleverly disguised as all-American Bill Wilson. When he and his attractive co-conspirator, Marla Hawkins, discover the location of a bomb test-site near Camp Lejeune, North Carolina, they get word to the Fuhrer as quickly as possible. The Nazi network in America works overtime to set up an attractive, female German spy who will meet a German expert in Camp Lejeune to ferret out the secrets of the bomb. But these observers are not themselves unobserved. The FBI gets wind of their plan, and dispatches their own attractive, female German-American counter-agent to North Carolina.

The Fuhrer decides to send trusted SS Colonel Max Reiner on this dangerous North Carolinian mission, but there is one problem: Colonel Reiner doesn’t know the first thing about atomic physics, and the powers of the beautiful German spy lie in chemistry of another kind. The Fuhrer is forced to send along an expert in atomic physics. When physicist Hans Richter is chosen, he has no desire to go. His father was murdered by an SS officer, and Richter abhors the Nazi Party. Ever since that tragedy, Hans has been biding his time for revenge, and what better revenge than using this opportunity to sabotage the Fuhrer’s plans?

Jack “Tiger” Morrison is an honorable man.  He has balanced the competing demands of family and his strong environmental creed. Together, he and his wife, Susan, created a family and started a successful camp for children in North Carolina’s Green River Valley.  Susan has been dead for some time, the victim of a drunk driver, but his daughter Sammy helps him run the camp.

Tiger’s love of the camp and love of nature is as strong as ever, but lately he can’t help but notice that the property around the camp is being bought by developers. How can he hold on to the camp–should he even try? What does Sammy want?  Tiger has a feeling that this will come to a head soon, but he is unprepared for the other developments of this eventful summer when a serial killer is stalking women in the mountains.  Senehi mixes difficult and horrifying elements–the murders and the threats to Tiger’s way of life–with warm elements such as a young camper’s growth and a pair of romances.

Comments Off on Rose Senehi. The Wind in the Woods. Vilas, NC: Canterbury House Publishing, 2010.

Eliza wasn’t exactly thrilled about going to summer camp. She would have preferred to stay at home with her mother to practice her favorite activity—solving analogies. However, when her mother says she’s enrolled Eliza at Camp Camden, Eliza bravely packs a few trusty analogy books and gives camp a chance.

But then, just as Eliza begins to settle into the rhythm of camp, she stumbles upon a magic portal in the camp stable. It leads to the mystical land of Burnshire, where animals talk and the wicked king incinerates anyone who opposes him! The persecuted animals recruit Eliza and her friends to save Burnshire from the king by solving a series of analogies. Eliza’s skills are put to the test in this fast-paced fantasy adventure.