Posted on 12 Apr ’11 by Biff Hollingsworth

Item description: Order issued during the bombardment of Fort Sumter, Charleston, S.C., on 12 April 1861 regarding the frequency of mortar shells to be fired onto the Fort. 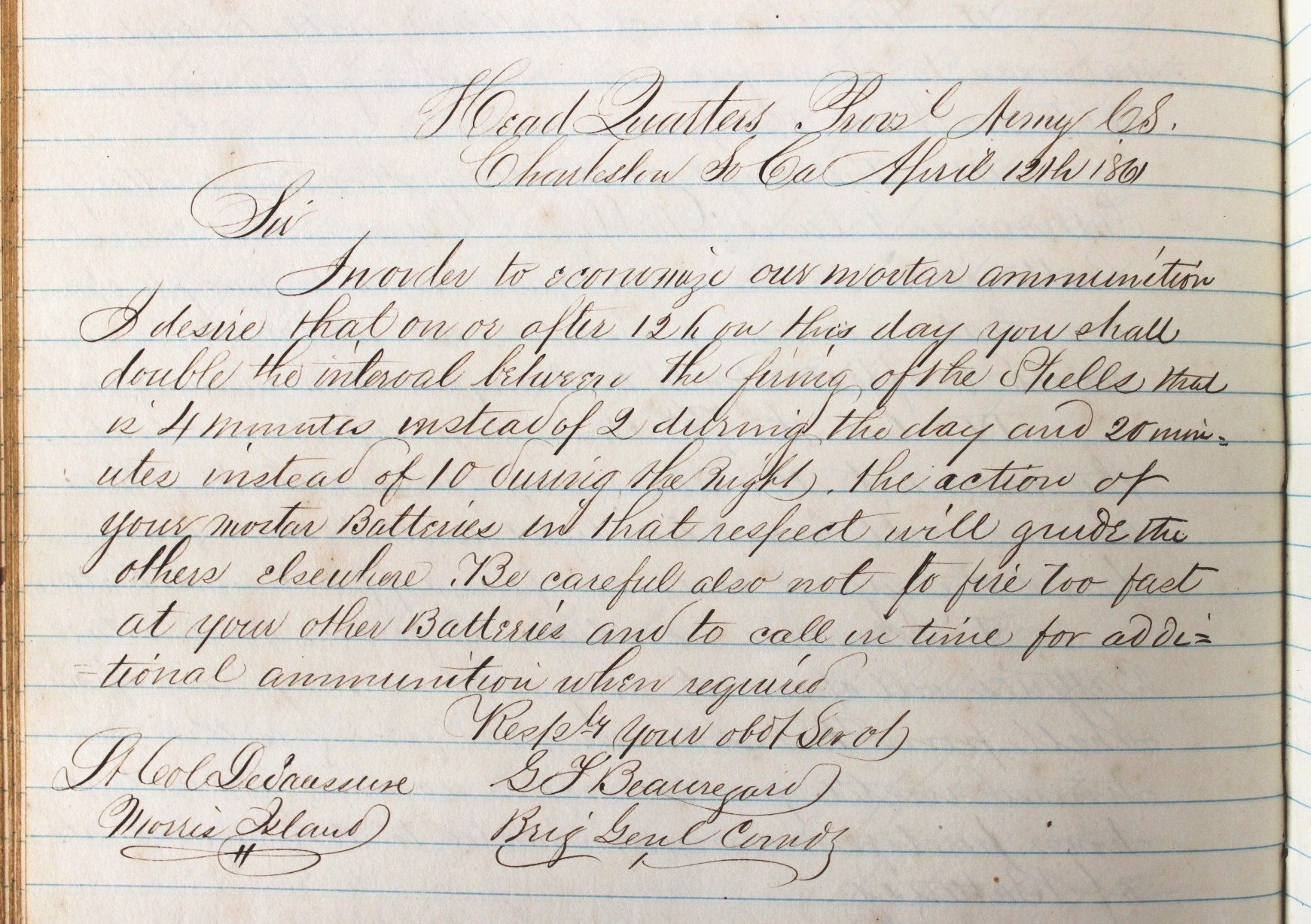 Sir
In order to economize our mortar ammunition
I desire that on or after 12 hour the firing of the shells that
is 4 minutes instead of 2 during the day and 20 min-
utes instead of 10 during the night. The action of
your mortar batteries in that respect will guide the
others elsewhere. Be careful also not to fire too fast
at your other batteries and to call in time for addi-
tional ammunition when required.

More about this item: Order-book kept by Lieutenant Colonel Wilmot Gibbes DeSaussure containing copies of orders received and sent by DeSaussure of the 1st South Carolina Artillery Regiment at the Charleston, S.C., harbor during the secession crisis, 27 December 1860-2 January 1861 and 1 March-30 April 1861. The orders come from two distinct periods separated by an interval, 2 January-1 March 1861, when DeSaussure was relieved of command in order to attend to his duties as a member of the South Carolina legislature.

Orders from the first period, 27 December 1860-2 January 1861, relate to events immediately following the evacuation of Fort Moultrie and Castle Pinckney by federal forces on the night of 26 December 1860. The orders, most of which were issued by Governor Francis W. Pickens, are concerned with taking possession of Fort Moultrie by South Carolina forces, its rehabilitation, and plans to prevent reinforcement of Fort Sumter by the United States government. Several of the orders relate to an elaborate system of codes and signals devised by the South Carolinians for communication among the city of Charleston, Fort Moultrie, and the several posts in Charleston harbor.

The second set of orders begins on 1 March 1861 when DeSaussure returned to command of his regiment, then stationed on Morris Island. Many of the orders from this period were issued by General P. G. T. Beauregard, who was then in command of the Provisional Confederate forces in and around Charleston. Orders relate to disposition of troops and location of batteries on Morris Island and Cummings Point; to camp routine, signals, and use and conservation of ammunition; a court martial; and preparations for actions should Fort Sumter open fire on the Confederate positions. One order, issued during the bombardment of Fort Sumter on 13 April, outlines procedures to be followed when and if the Fort lowered its flag. Orders after the surrender of Fort Sumter provide for the occupation of the Fort, for hoisting the Confederate flag, and for allowing the garrison to withdraw with the honors of war. Several long reports describe in detail the attack on the Fort by the Confederates and the progress of the bombardment.

The orders end on 30 April 1861 when DeSaussure and his command on Morris Island were relieved and ordered to report to the adjutant general in Charleston for further orders.