20 August 1861:”The articles brought were my new hat…two beautiful palmetto cockades, a letter from Marion, a false lemon made of wax, sent me by that wicked little elf, the coquettish Miss Minnie, & a very saucy letter from the same unreverential source.”

Posted on 20 Aug ’11 by Biff Hollingsworth

Item description: This is a letter from 10 August 1861, from Charles Woodward Hutson to his sister, discussing life in camp as part of the Hampton’s Legion South Carolina Infantry. Charles Woodward Hutson (1840-1936) grew up on plantations in Beaufort District, S.C., attended South Carolina College, served throughout the Civil War in Virginia, was a teacher and professor in several southern states including fifteen years in Texas, and settled finally in New Orleans as an artist and writer. Hutson enlisted as a private in the A Company. The Hampton Legion South Carolina Infantry Battalion was organized on 12 June 1861, and mustered out 9 April 1865 at Appomattox Court House. 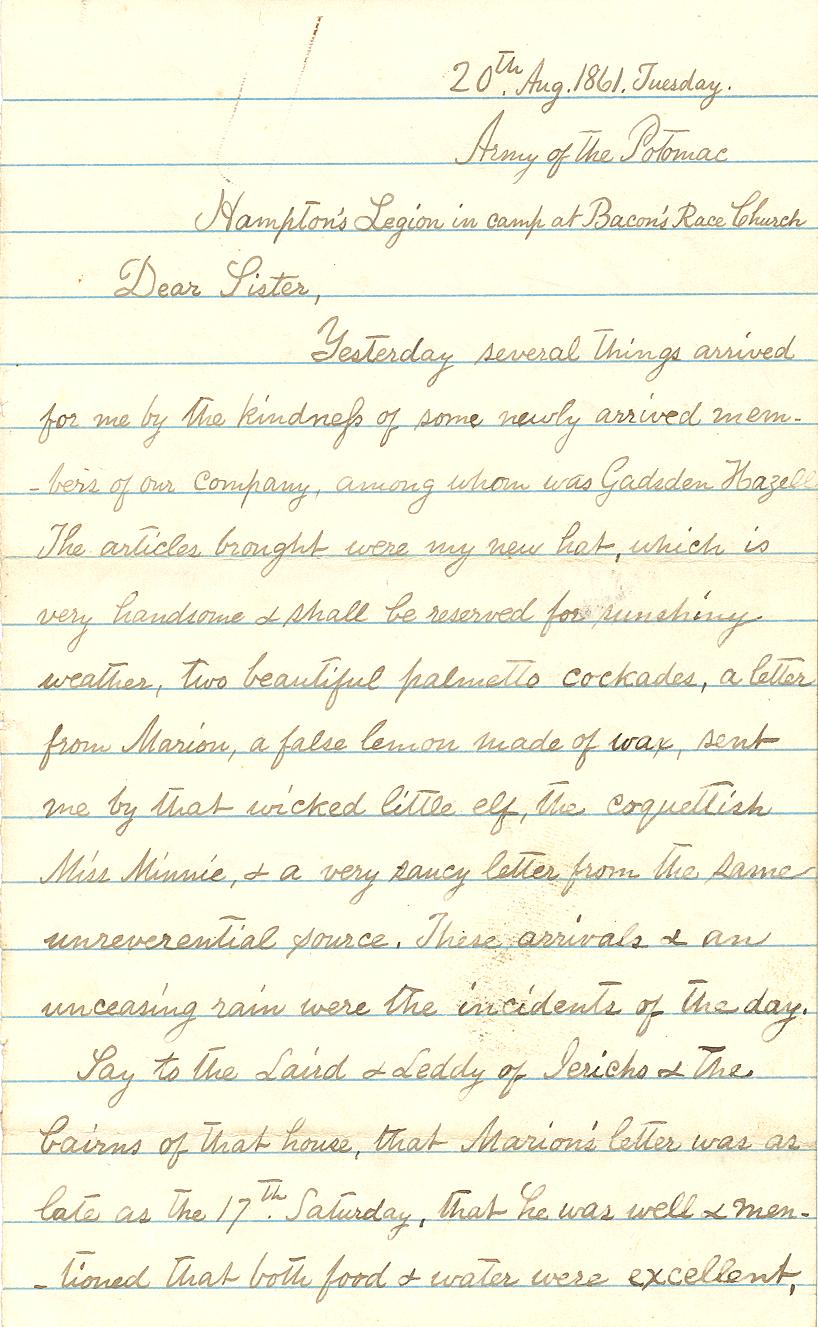 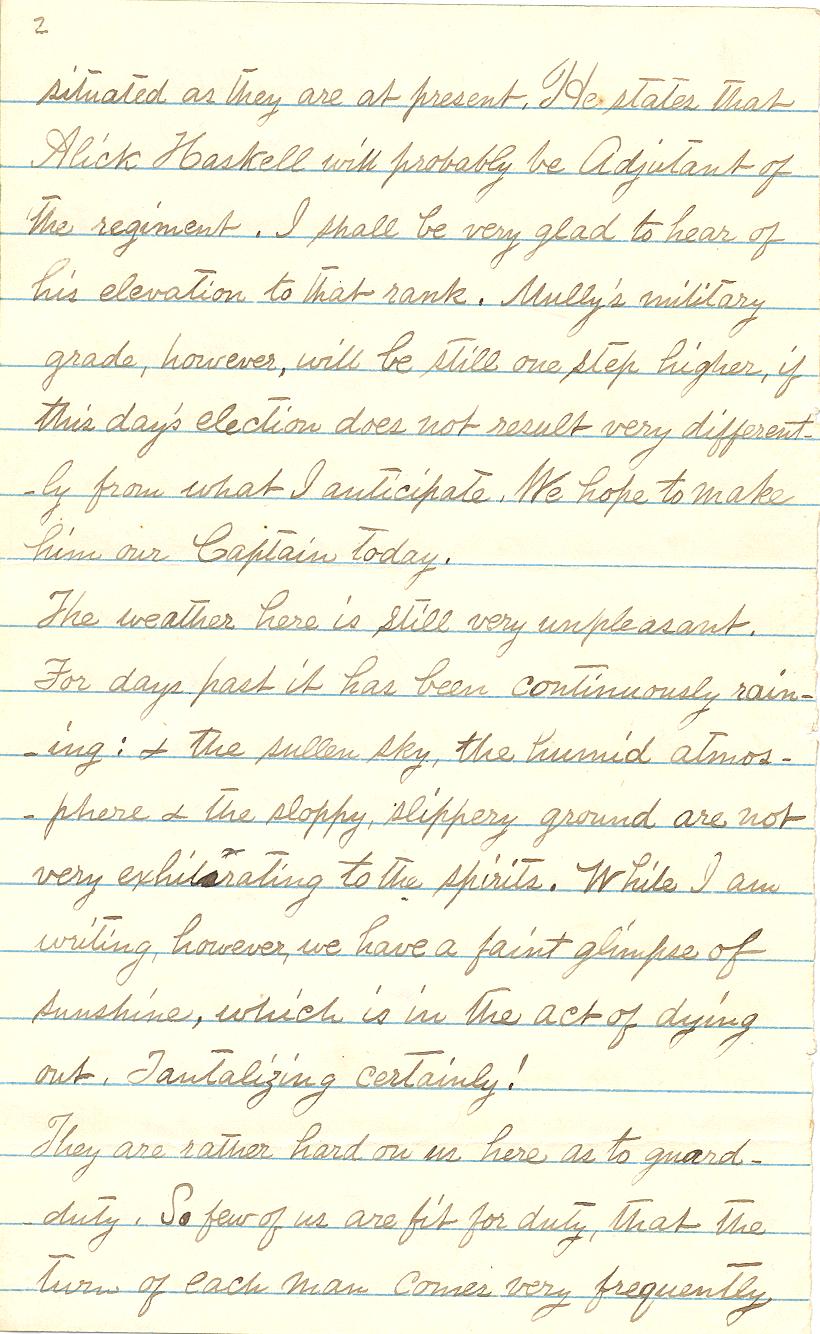 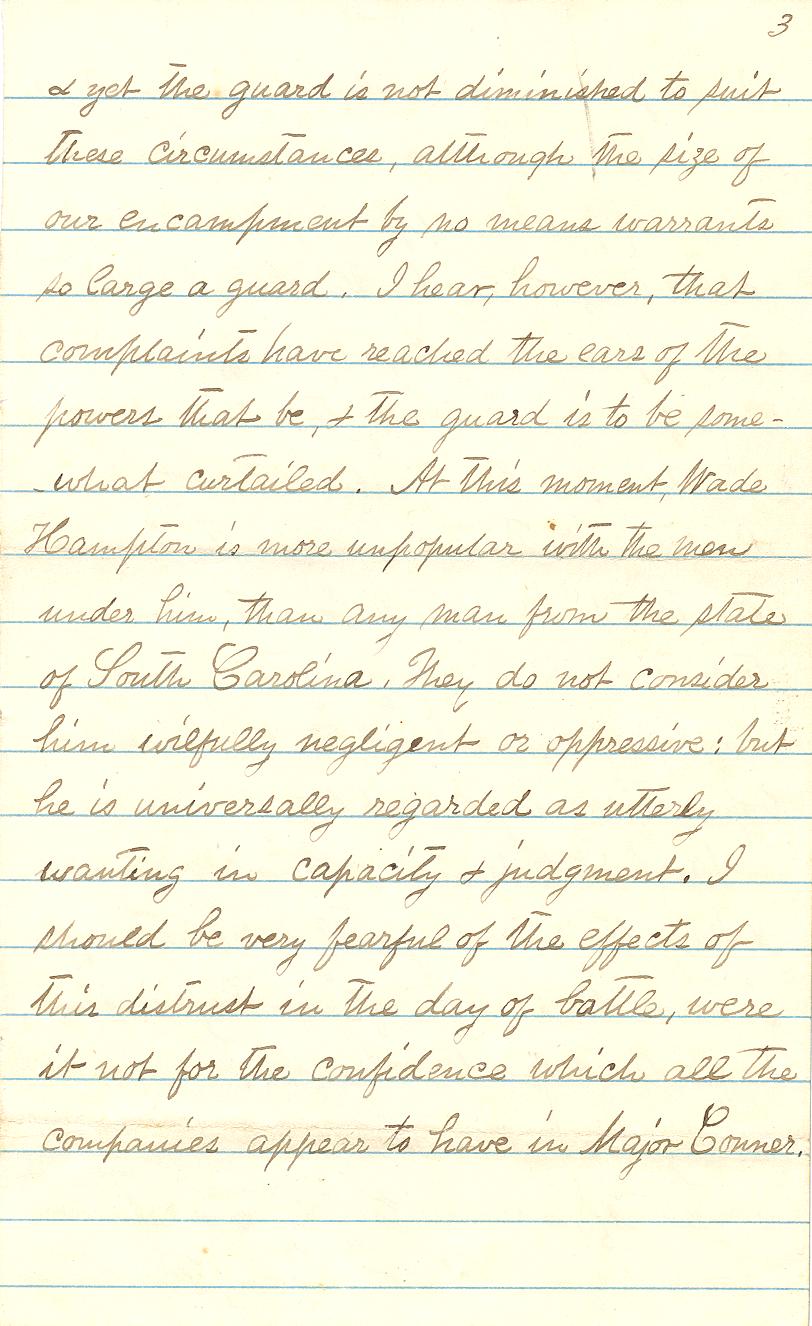 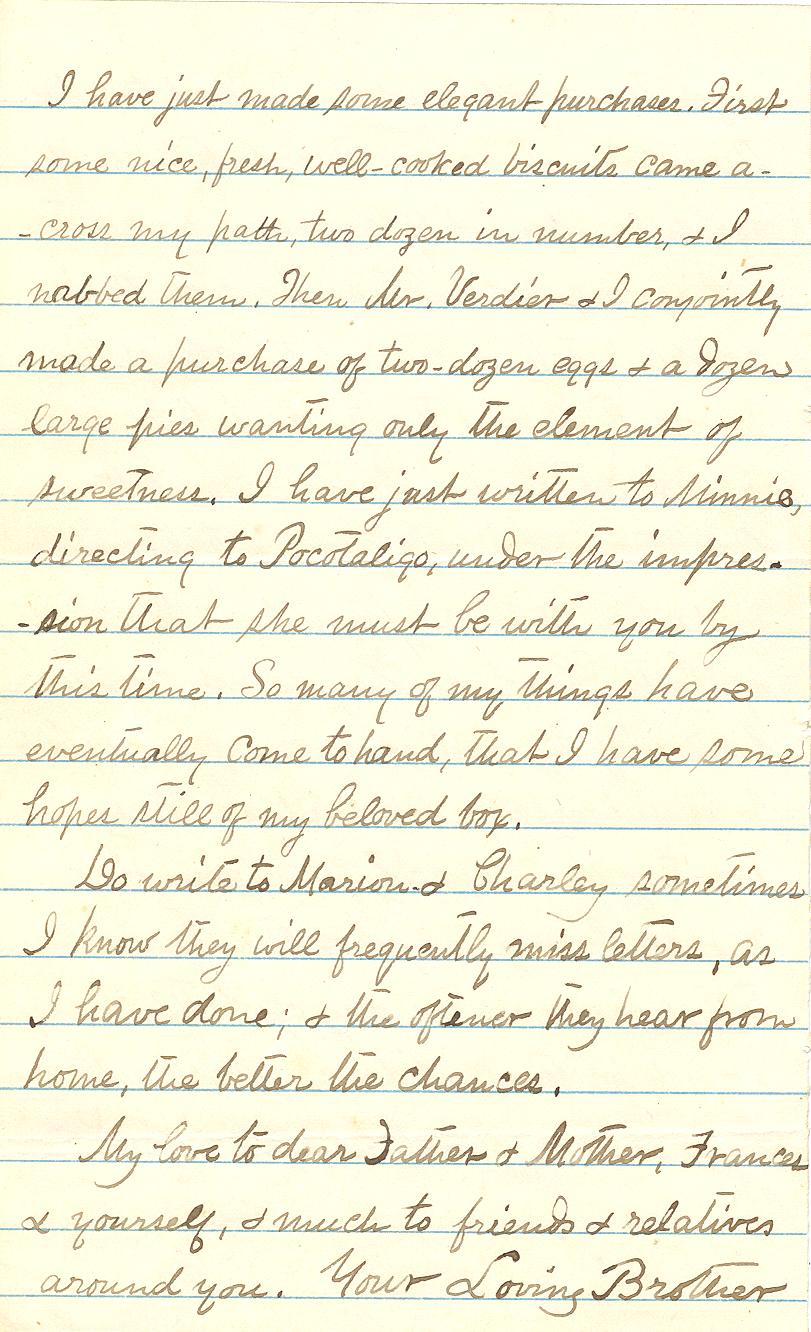 Yesterday several things arrived for me by the kindness of some newly arrived members of our company, among whom was Gadrden Hazell. The articles brought were my new hat, which is very handsome & shall be reserved for sunshiny weather, two beautiful palmetto cockades, a letter from Marion, a false lemon made of wax, sent me by that wicked little elf, the coquettish Miss Minnie, & a very saucy letter from the same unreverential source. These arrivals & an unceasing rain were the incidents of the day.

Say to the Laird & Leddy of Jericho & the Gaines of that house, that Marion’s letter was as late at the 17th Saturday, that he was well & mentioned that both food & water were excellent, situated as they are at present. He states that Alick Haskell will probably be Adjutant of the regiment. I shall be very glad to hear of his elevation to that rank. Mully’s military grade, however, will be still one step higher, if this day’s election does not result very differently from what I anticipate. We hope to make him our Captain today.

The weather here is still very unpleasant. For days it has been continuously raining; & the sullen sky, the humid atmosphere & the sloppy, slippery ground are not very exhilarating to the spirits. While I am writing, however, we have a faint glimpse of sunshine, which is in the act of dying out. Tantalizing certainly!

They are rather hard on us here as to guard duty. So few of us are fit for duty, that the turn of each man comes very frequently & yet the guard is not diminished to suit these circumstances, although the size of our encampment by no means warrants so large a guard. I hear, however, that complaints have reached the ears of the powers that be & the guard is to be somewhat curtailed. At this moment, Wade Hampton is more unpopular with the men under him, than any man from the state of South Carolina. They do not consider him willfully negligent or oppressive; but he is universally regarded as utterly wanting in capacity & judgement. I should be very fearful of the effects of this distrust in the day of battle, were it not for the confidence which all the companies appear to have in Major Conner.

I have just made some elegant purchases. First some nice, fresh, well-cooked biscuits came across my path, two dozen in number, & I nabbed them. Then [?] Verdier & I conjointly made a purchase of two-dozen eggs & a dozen large pies wanting only the element of sweetness. I have just written to Minnie, directing to Pocotaligo, under the impression of that she must be with you by this time. So many of my things have eventually come to hand, that I have some hopes still of my beloved box.

Do write to Marion & Charley sometimes I know they will frequently miss letters, as I have done; & the oftener they hear from home, the better the chances.

My love to dear Father & Mother, Frances & yourself, & much to friends & relatives around you. Your Loving Brother

This entry was posted in Southern Historical Collection and tagged South Carolina, troops. Bookmark the permalink.