17 September 1861: Destruction of Fort Ocracoke on Beacon Island, at the entrance of Pamlico Sound

Posted on 17 Sep ’11 by Biff Hollingsworth

Item description: “Destruction of Fort Ocracoke on Beacon Island, at the entrance of Pamlico Sound, Sept. 17, 1861, by an expedition under command of Lieut. Eastman, of the ‘Pawnee’.” As published in The New York Illustrated News, October 7, 1861, p. 361. 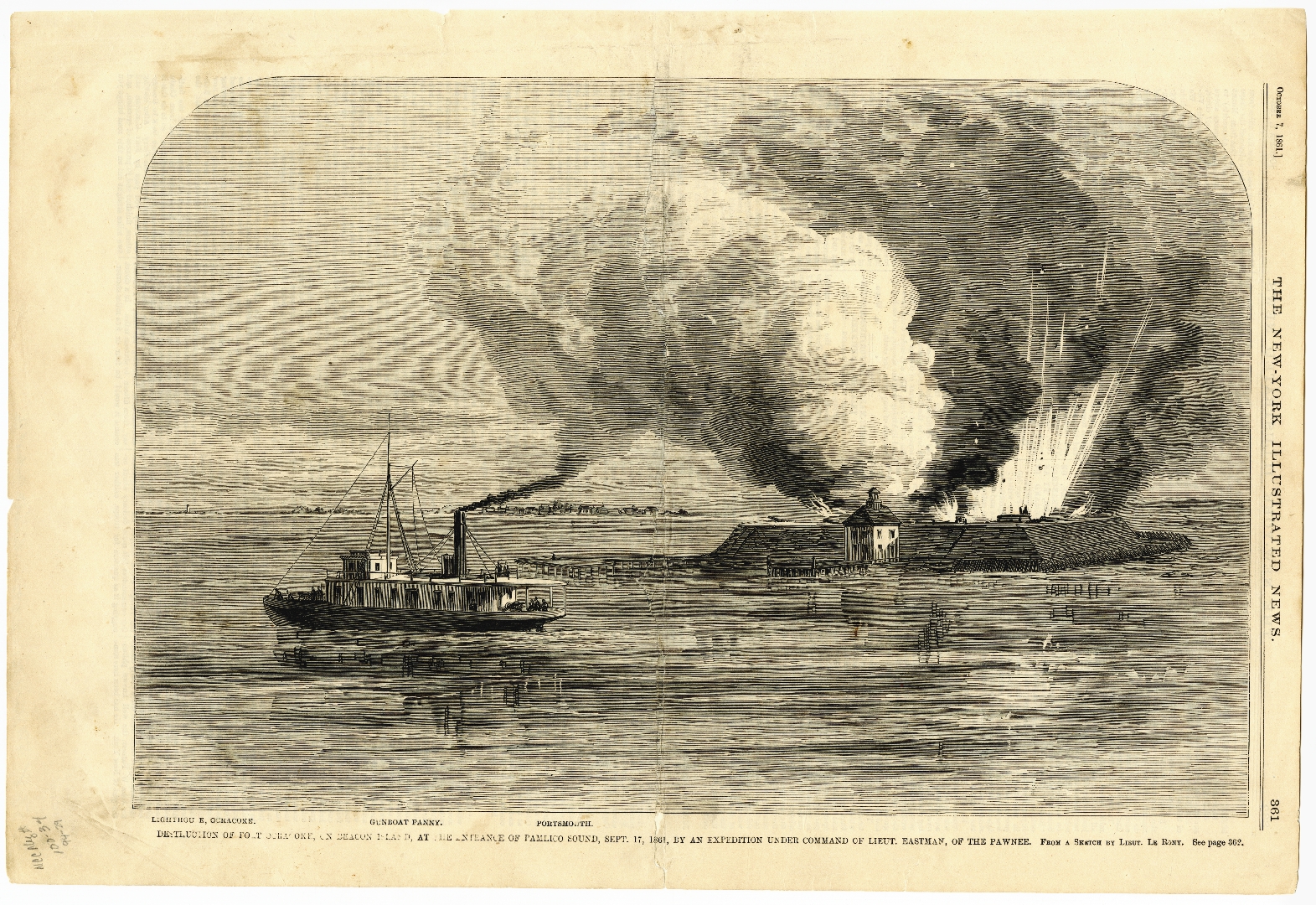 DESTRUCTION OF FORT OCRACOKE, ON
BEACON ISLAND, AT THE ENTRANCE OF
PAMLICO SOUND, SEPT. 17, 1861, BY AN
EXPEDITION UNDER COMMAND OF
LIEUT. EASTMAN, OF THE PAWNEE.
FROM A SKETCH BY LIEUT. LE RONY.—Page 340.

A correspondent of a cotemporary writes:

On Monday, the 16th inst, an expedition was
sent to the Ocracoke Inlet, to take and destroy
the fort on Beacon Island near the entrance to
the Sound. It was under command of Lieut.
Eastman, of the Pawnee, and consisted of
sixty-five men from the Coast Guard, under
Lieut. Rowe, and a detachment of sailors and
marines from the Pawnee, in the ship’s launch.
The Coast Guard were on board the Fanny,
which towed the launch down, taking the in-
side passage. The frigate Susquehanna and
the Tempest went by sea to co-operate with the
forces inside, but in consequence of their great
draft they were unable to approach near
enough to the fort to be of service, and they re-
turned to Hatteras Inlet without aiding in the
work. The Fanny was able to approach within
a mile of the fort, and the launch was sent
ashore, and carried the force which could be
spared, which effected a landing with safety.

The fort was found deserted, but the enemy
had but a short time previous to our arrival
visited the work, and successfully removed
two heavy eight inch guns, and transported
them to Newbern, where the rebels are erect-
ing three strong batteries.

Monday and Tuesday were occupied in de-
stroying the pieces of ordnance found in the
fort, and by Tuesday noon we had destroyed or
rendered unserviceable eighteen long thirty-
two’s and four eight inch guns. On Tuesday
afternoon, at a late hour, fires were built in va-
rious parts of the main bomb-proof and maga-
zine, and the three smaller bomb-proofs near
the curtains of the work. The bomb proofs,
which were constructed in the most substan-
tial and skillful manner, of heavy pine timber
and covered with sand and turf, were soon
wrapt in flames. The torch was also applied
to the lighthouse on the island, and this,
with the immense fort, were soon wrapt in
flames. The conflagration raged furiously all
night, the light being plainly visible thirty
miles distant. The Fanny laid off at anchor
until morning, and on Wednesday, the fort
having been completely destroyed, the expe-
dition returned to this point, without the loss
of a man.

The destruction of the fort and armament
was complete, and must involve the enemy in
a loss of between two and three hundred thou-
sand dollars. The fort was one of the largest
on the coast, and could have been held against
any attack from our fleet, as it could not be
approached within long range by vessels of
deep draft. But the enemy were terribly
frightened by the capture of Forts Clark and
Hatteras, and incontinently deserted their
work the night following the loss of the latter
fort.

Our sketch, taken by an officer of the expe-
dition, represents the conflagration.

One Response to 17 September 1861: Destruction of Fort Ocracoke on Beacon Island, at the entrance of Pamlico Sound