10 December 1861: “I have Just returned from one of The most heart rending scenes ever witnessed by man”

Posted on 10 Dec ’11 by Biff Hollingsworth

Item description: Letter from William C. McClellan, a private in the Confederate Army at Camp Centerville, Va., to his sister Matilda McClellan in Shoalford, Limestone County, Alabama. His letter describes routine news from camp, as well as the execution of two Louisiana Tiger soldiers for drunkenly bayoneting a lieutenant. 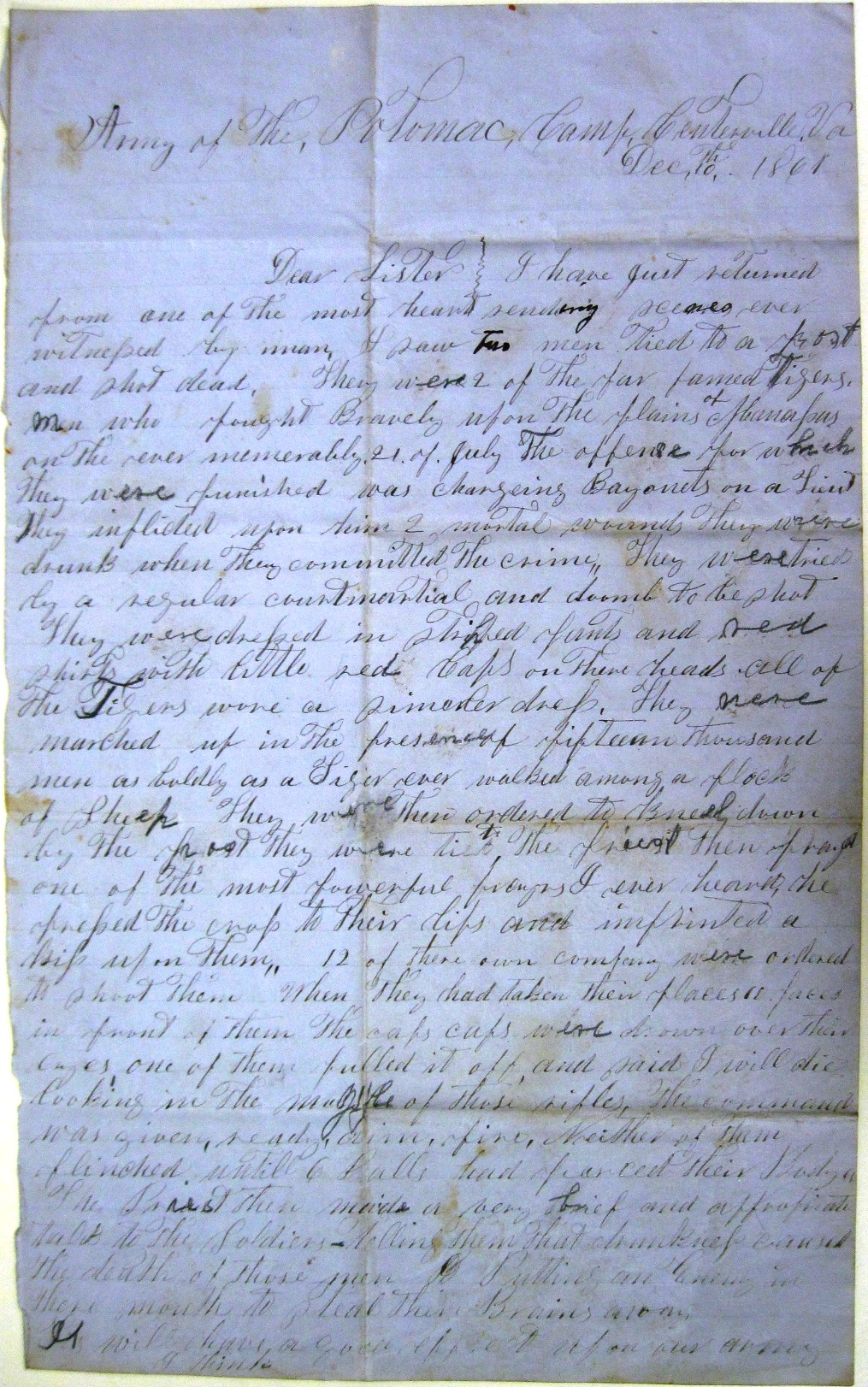 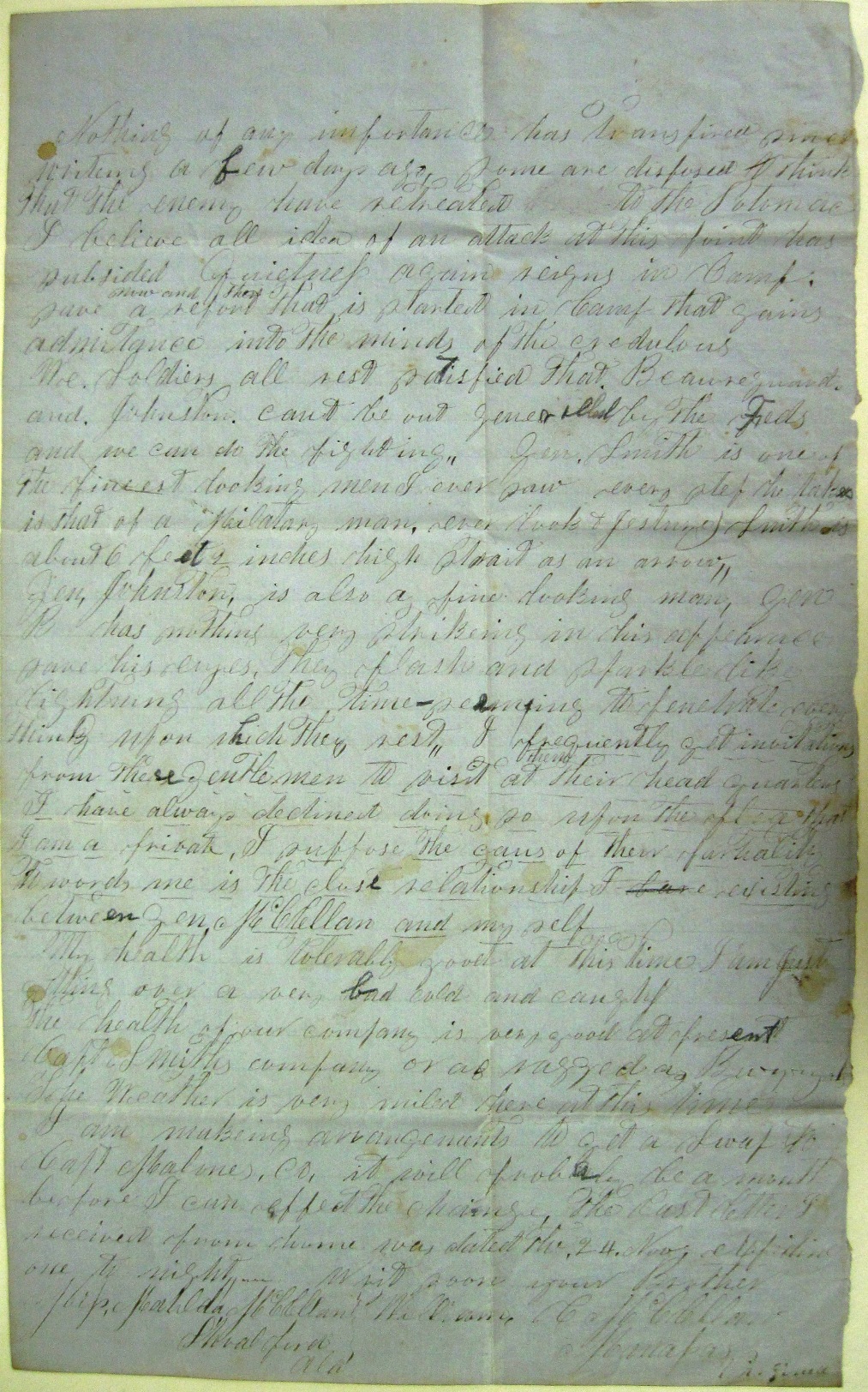 Dear Sister | I have Just returned from one of The most heart rending scenes ever witnessed by man. I saw two men tied to a post and shot dead. They were 2 of The far famed Tigers. Men who fought Bravely upon The plains of Manassas on The ever memerably. 21. of. July The offense for which They were punished was chargeing Bayonets on a Lieut They inflicted upon him 2 mortal wounds They were drunk when They committed The crime,, They were tried by a regular courtmartial and doomb to be shot

They were dressed in stripped pants and red shirts with little red Caps on There heads. All of The Tigers wore a simaler dress. They were marched up in The presence of fifteenn thousand men as boldly as a Tiger ever walked among a flock of Sheep  They were Then ordered to kneel down by the post  They were tied to  The priest Then prayed one of The most powerful prayers I ever heard, he pressed The cross to Their lips and imprinted a kiss upon Them,, 12 of there own company were ordered to shoot Them  When They had taken their places 10 paces in front of them  The caps caps were drawn over their eyes, one of them pulled it off, and said I will die looking in The muzzle of those rifles, The command was given, ready, aim, fire, Neither of Them flinched untill 6 Balls had pierced their Bodyes  The Priest then made a very brief and appropriate talk to The Soldiers__Telling Them That drunkness caused the death of those men  Putting an Enemy in There mouth to steal There Brains away

It will have a good effect upon our army I think

Nothing of any importance has Transpired since writing a few days ago, some are disposed to think That The enemy have retreated to the Potomac  I believe all idea of an attack at This point has subsided  Quietness again reigns in Camp, save now and then a report That is started in Camp that gains admitance into The minds of The credulous  We Soldiers all rest satisfied That Beaureguard. and. Johnston. cant be out generalled by The Feds and we can do The fighting,,  Gen. Smith is one of The finest looking men I ever saw  every step he takes is that of a Military man, ever look & gesture  Smith is about 6 feet 2 inches high strait as an arrow,,  Gen, Johnston, is also a fine looking man, Gen B has nothing very strikeing in his appearace save his eyes. They flash and sparkle like lightning all The Time–seeming to penetrate every Thing upon which They rest,, I frequently get invitations from These Gentlemen to visit Them at Their head quarters  I have always declined doing so upon The plea that I am a private, I suppose The caus of their partiality Towards me is The close relationship existing between Gen McClellan and myself

The health of our company is very good at present  Capt Smiths company or as rugged as B___ The Weather is very mild here at this time  I am makeing arrangements to get a Swap to Capt Malones. Co. it will probaly be a month before I can effect The change. The last letter I received from home was dated The. 24. Nov, expecting one to night   Writ soon your Brother