Posted on 2 Feb ’12 by Biff Hollingsworth

In this letter, Laura describes some of her traveling experiences reflects on a recently attended funeral, which reminds her of the grief she felt at the loss of a child named June (it is unclear whether this child is her own).

Ellen, was married to John Richardson (d. 1862), editor of the “Prairie News” and Confederate soldier. Laura was married to J. Byrd Williams (d. 1864), merchant and Confederate soldier. During the Civil War, both Ellen and Laura followed their husbands to various camps in Virginia and Georgia and described their experiences. Both men served in the 11th and 41st Mississippi regiments and died during the war.

After the war, Ellen and Laura taught school to support themselves at Lamar Female Seminary in Paris, Texas. 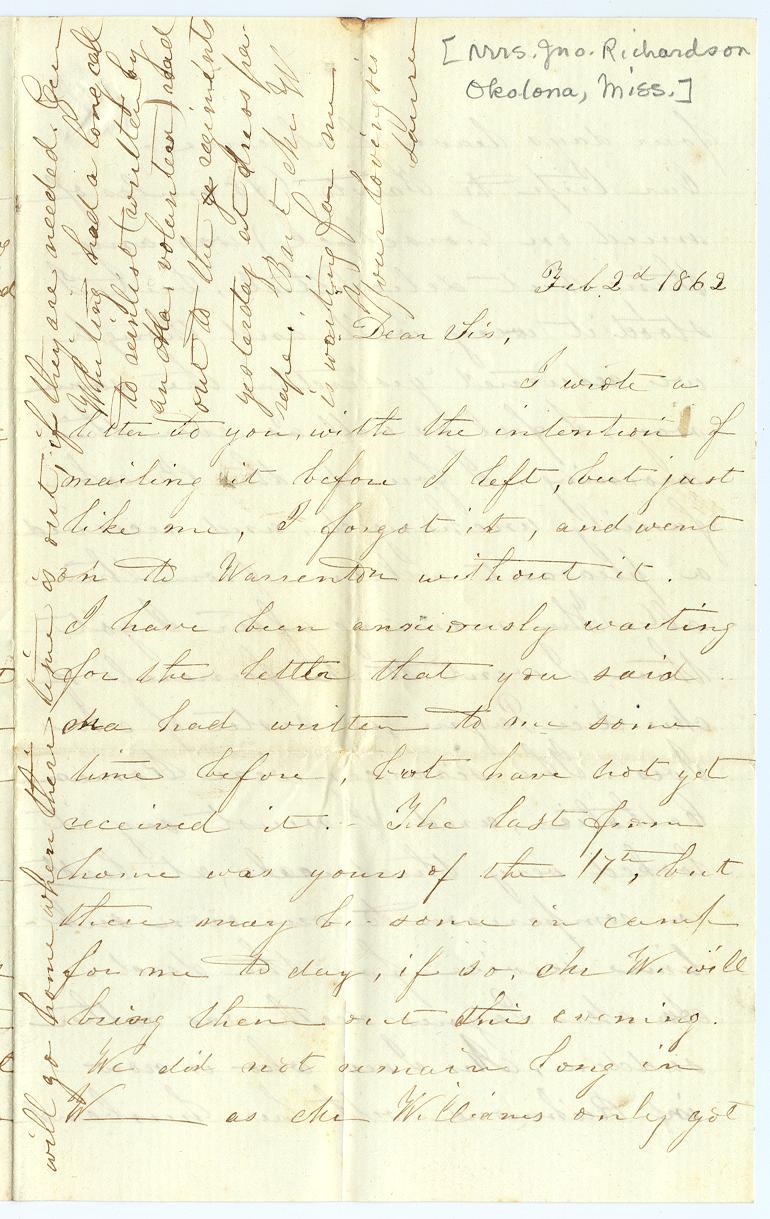 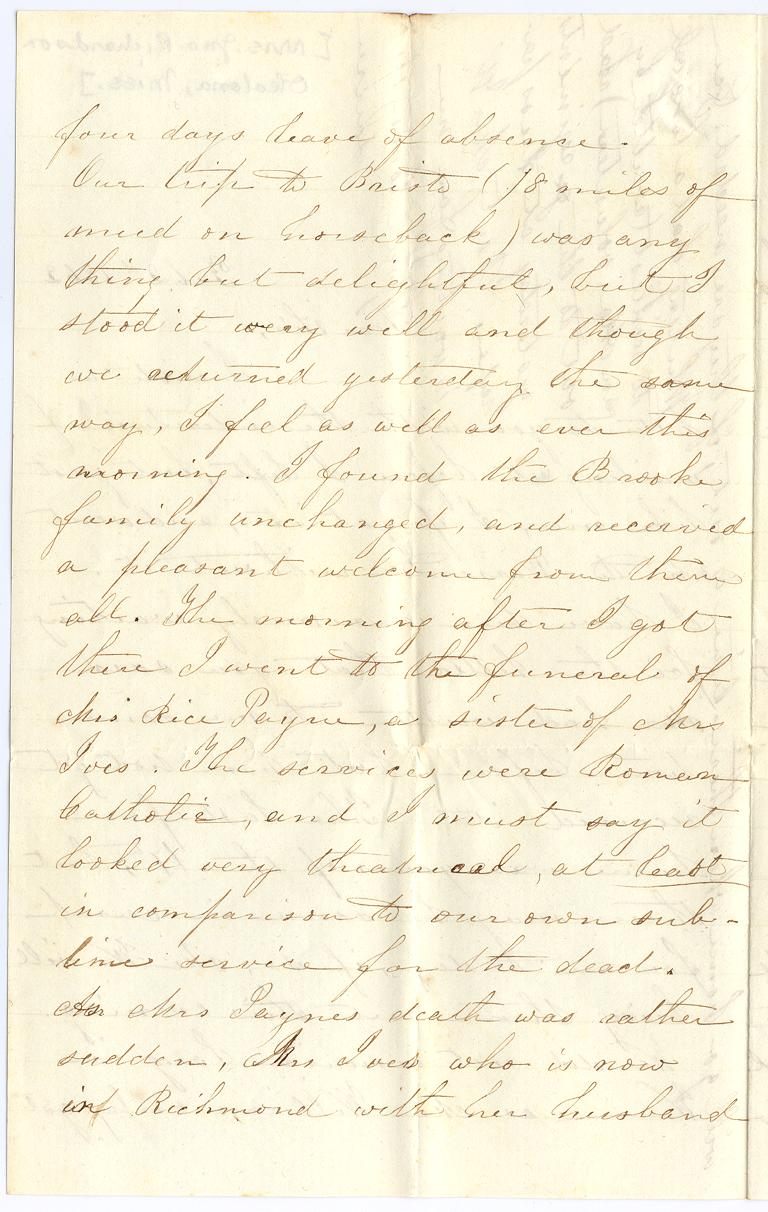 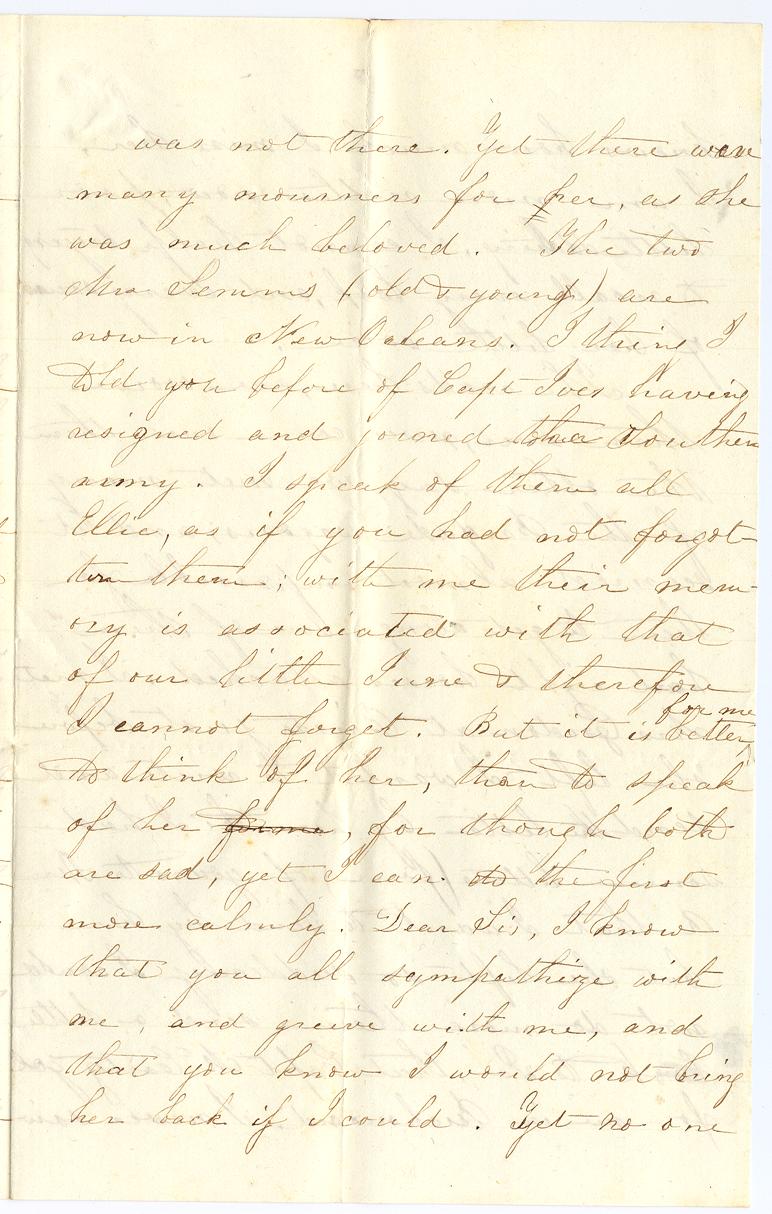 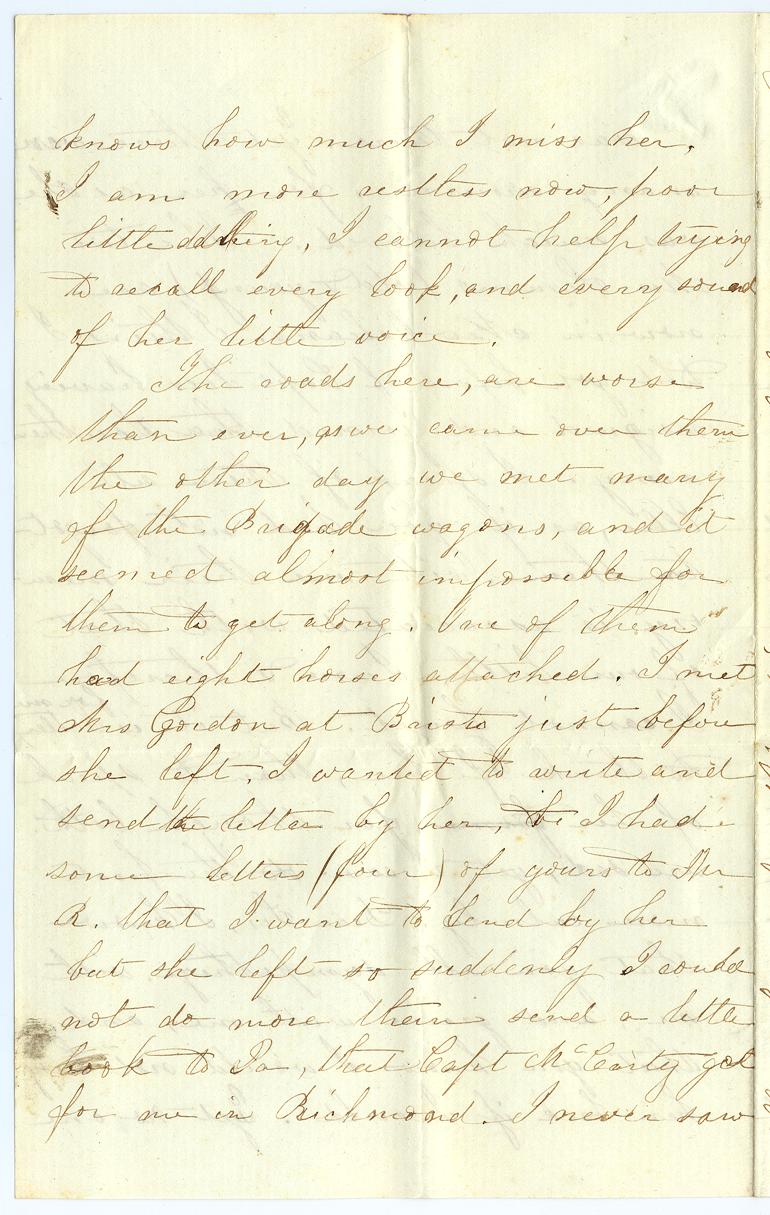 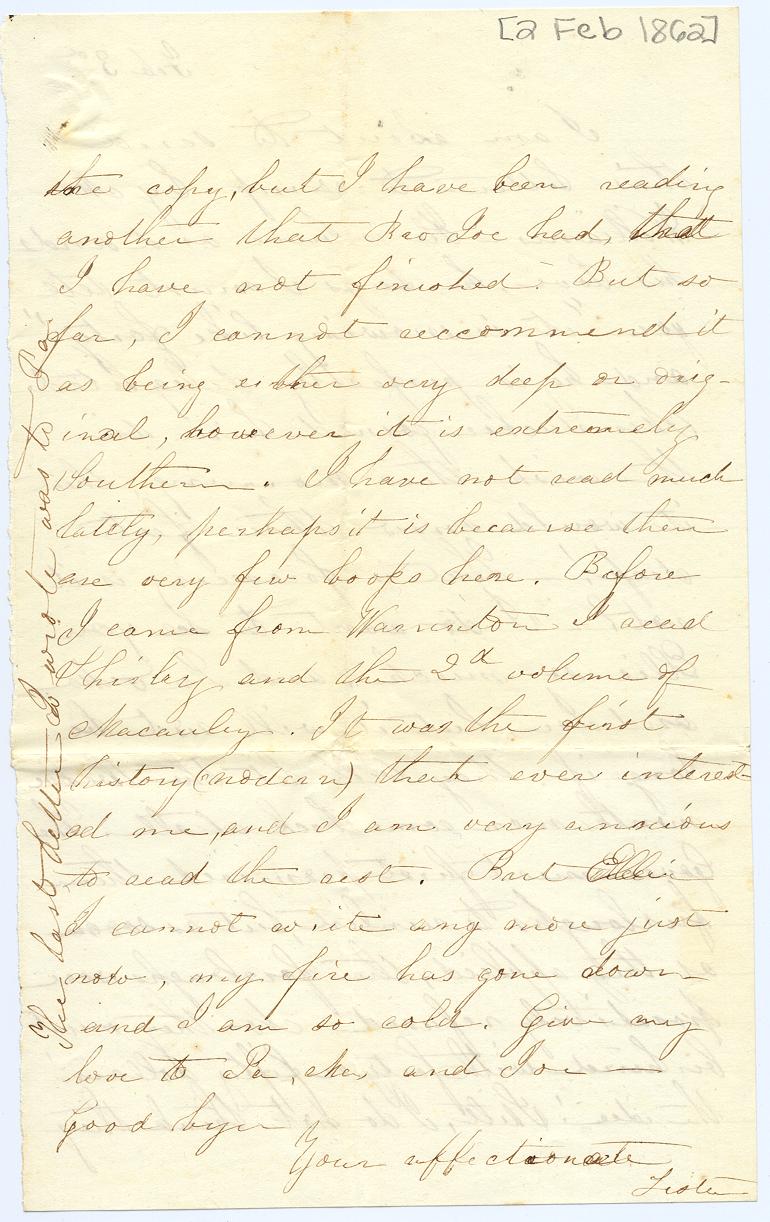 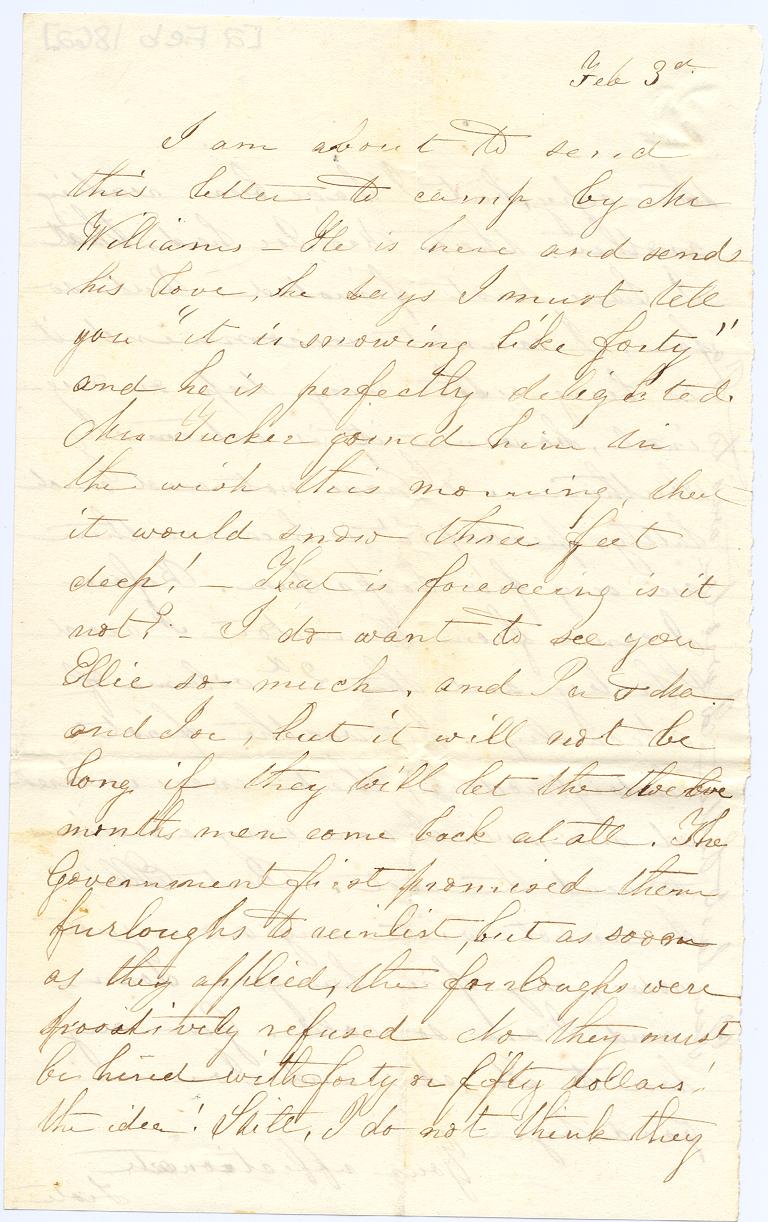 I wrote a letter to you, with the intention of mailing it before I left, but just like me, I forgot it, and went in to Warrenton without it.

I have been anxiously waiting for the letter that you said Ma had written to me some time before, but have not yet received it. The last from home was yours of the 17th, but there may be some in camp for me to day, if so, Mr. W. will bring them out this evening.

We did not remain long in W____ as Mr. Williams only got four days leave of absence.

Our trip to Bristo (18 miles of mud on horseback) was any thing but delightful, but I stood it very well and though we returned yesterday, the same way, I feel as well as ever this morning. I found the Brooke family unchanged, and received a pleasant welcome from them all. The morning after I got there, I went to the funeral of Mrs. Rice Payne, a sister of Mr. Ives. The services were Roman Catholic, and I must say it looked very theatrical, at least in comparison to our own sublime service for the dead.

As Mrs. Payne’s death was rather sudden, Mr. Ives who is now in Richmond with her husband was not there. Yet there were many mourners for her, as she was much beloved. The two Mr. [Semms?] (old & young) are now in New Orleans. I think I told you before of Capt. Ives having resigned and joined the Southern army. I speak of them all. Ellie, as if you had not forgotten them; with me their memory is associated with that of our little June & therefore I cannot forget. But it is for me better to think of her, than to speak of her, for though both are sad, yet I can do the first more calmly. Dear Sis, I know that you all sympathize with me, and grieve with me, and that you know I would not bring her back if I could. Yet no one knows how much I miss her. I am more restless now, poor little thing, I cannot help trying to recall every look, and every sound of her little voice.

The roads here, are worse than ever, as we came over them the other day we met many of the Brigade wagons, and it seemed almost impossible for them to get along. One of them had eight horses attached. I met Mrs. Gordon at Bristo just before she left. I wanted to write and send the letter by her, & I had some letters (four) of yours to Mr. R. that I want to send by her but she left so suddenly I could not do more than send a little book to Pa, that Capt. McCarty got for me in Richmond. I never saw the copy, but I have been reading another that Bro. Joe had, that I have not finished. But so far, I cannot recommend it as being either very deep or original, however it is extremely Southern. I have not read much lately, perhaps it is because there are very few books here. Before I came from Warrenton I read Shirley and the 2d volume of Macauley. It was the first history (modern) that ever interested me, and I am very anxious to read the rest. But Ellie I cannot write any more just now, my fire has gone down and I am so cold. Give my love to Pa, Ma, and Joe.

I am about to send this letter to camp by Mr. Williams. He is here and sends his love, he says I must tell you “it is snowing like forty” and he is perfectly delighted. Mrs. Tucker joined him in the wish this morning, that it would snow three feet deep! That is foreseeing is it not? I do want to see you Ellie so much and Pa & Ma and Joe, but it will not be long if they will let the twelve months men come back at all. The Government first promised them furloughs to reinlist, but as soon as they applied, the furloughs were positively refused. No they must be hired with forty or fifty dollars! the idea! Still, I do not think they will go home when their time is out, if they are needed. Gen. Whiting had a long call to reinlist (written by [?], volunteer) read out to the regiments yesterday at dress parade. But Mr. W is waiting for me.