28 March 1862: “To day is a gloomy one in the calendar. Jackson’s reverse has cast down the whole community.”

Posted on 28 Mar ’12 by Biff Hollingsworth

Item Description: Letter to James Johnston Pettigrew, from sister M. B Pettigrew, Hillsborough, N.C., March 28, [1862?].  In her letter, she describes the mood and reactions of people after the “reverses” of Stonewall Jackson, reports on the aftereffects on several family members caused by the North’s taking of Roanoke Island, offers her perspective on the fighting at New Bern, and concludes by asking her brother why he did not accept an offer to become a general. 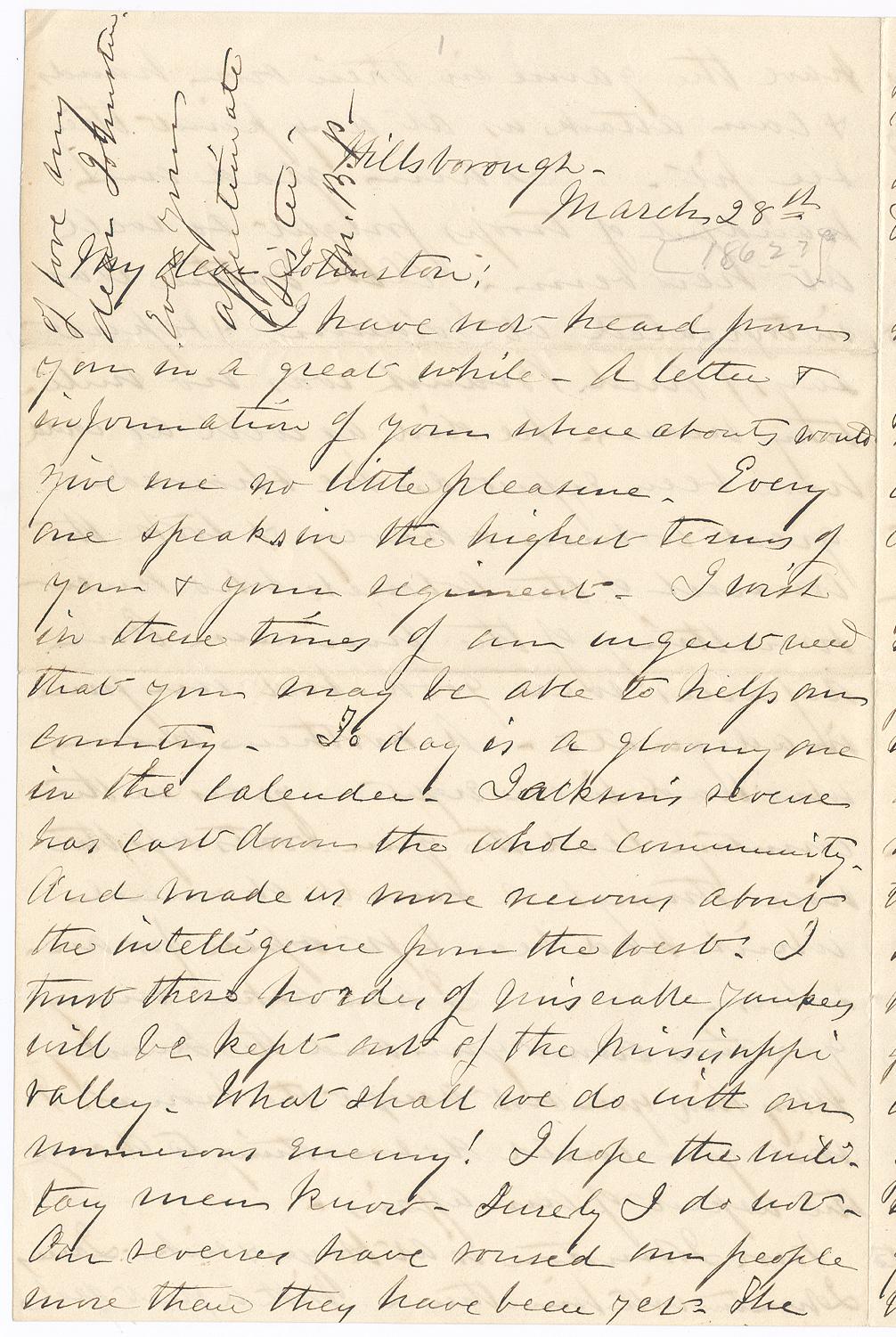 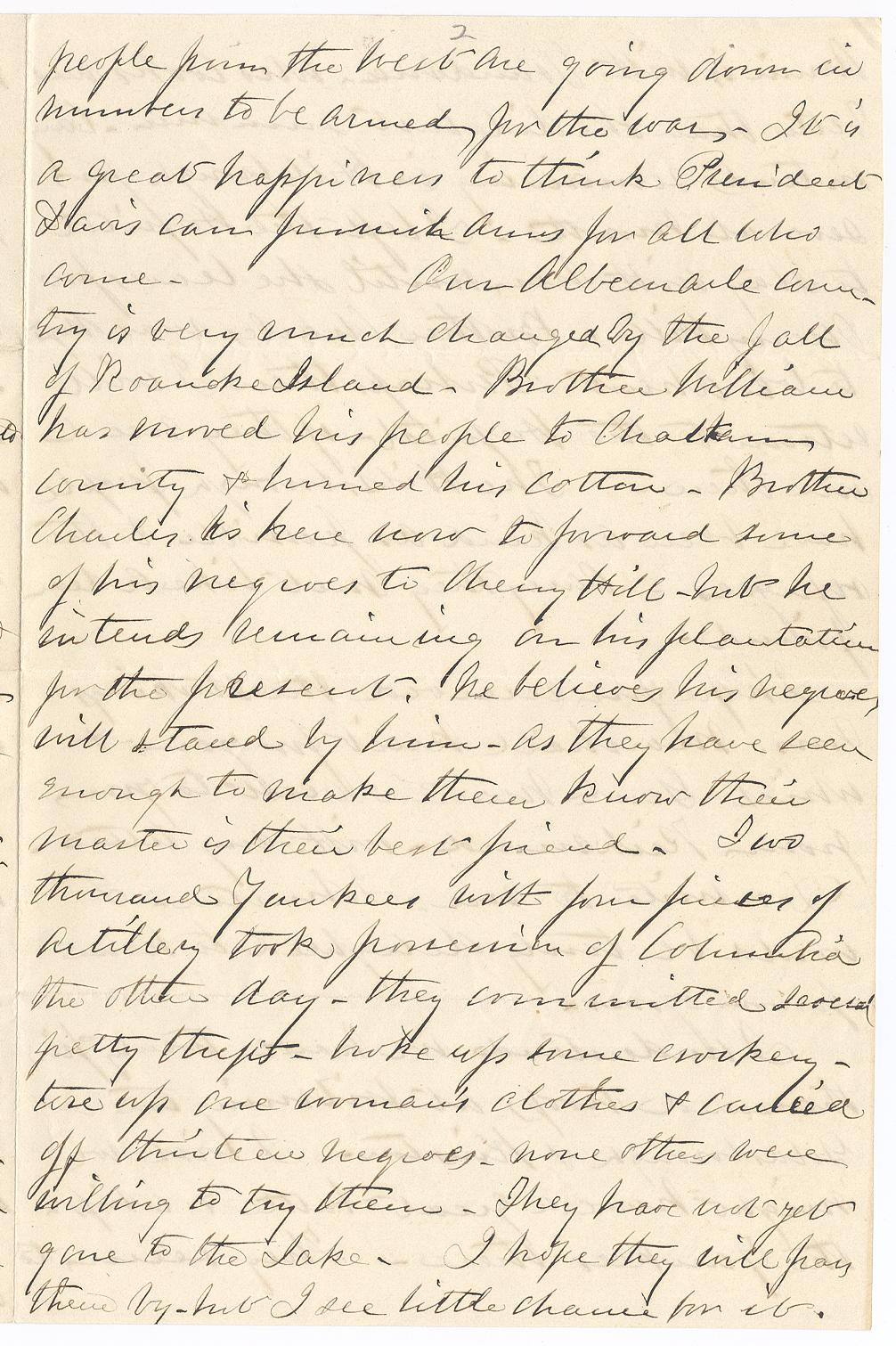 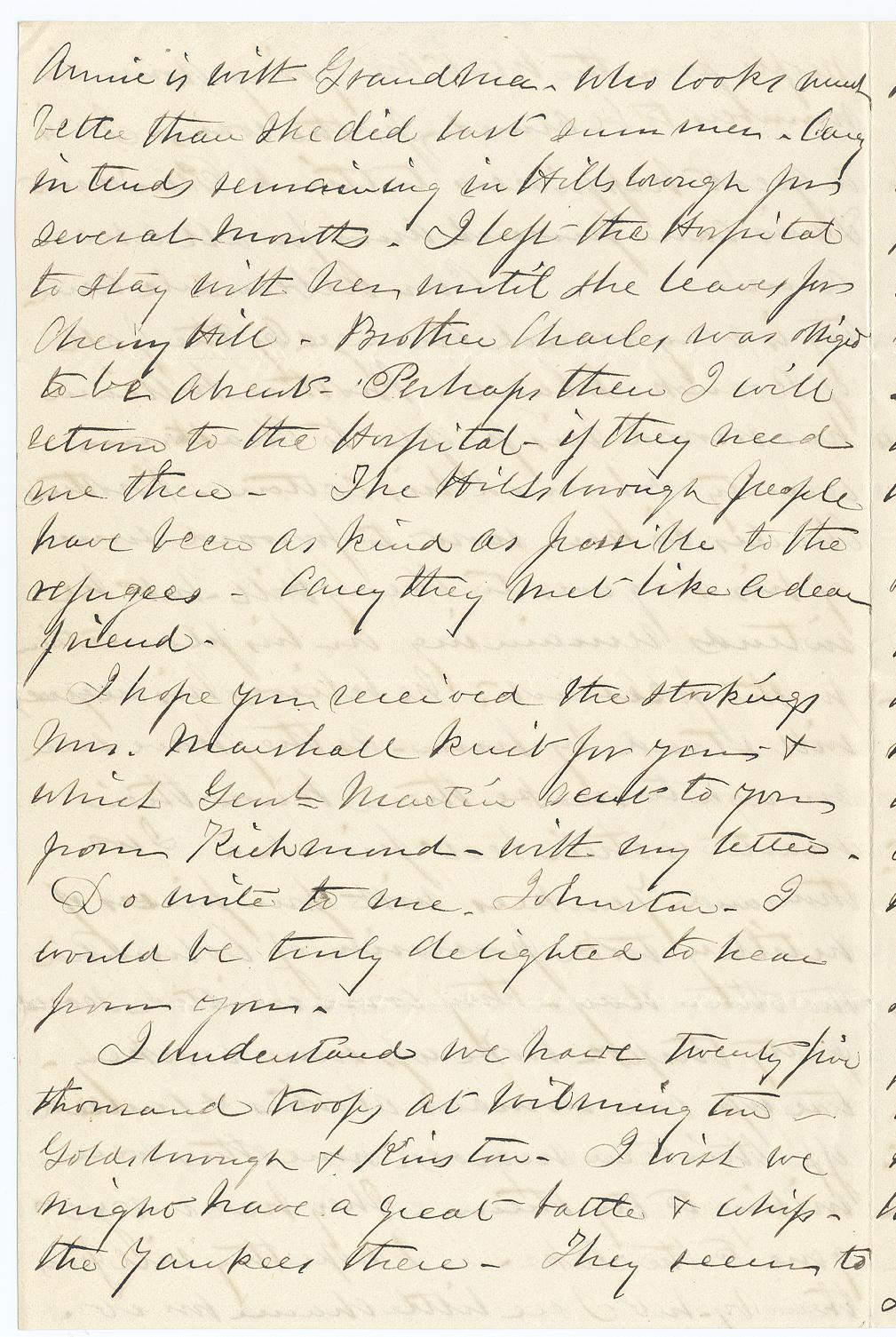 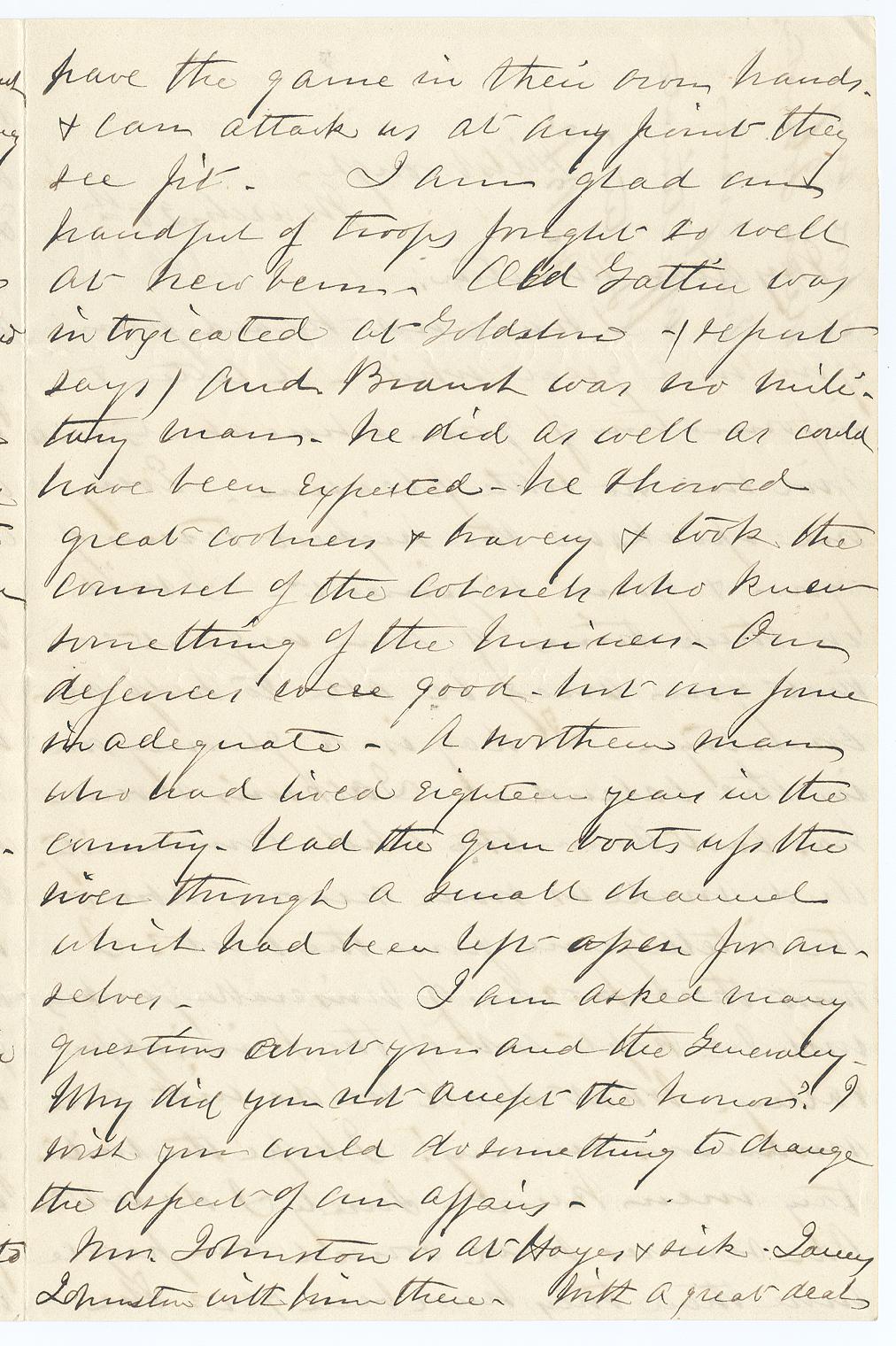 I have not heard from you in a great while.  A letter & information of your where abouts would give me no little pleasure.  Every one speaks in the highest terms of you & your regiment.  I wish in these times of an urgent need that you may be able to help our country.  To day is a gloomy one in the calendar.  Jackson’s reverse has cast down the whole community.  And made us more nervous about the intelligence from the West.  I trust these hordes of miserable Yankees will be kept out of the Mississippi Valley.  What shall we do with our [numerous?] enemy!  I hope the military men know.  Surely I do not.  Our reverses have roused our people more than they have been yet.  The people from the West are going down in numbers to be armed for the war.  It is a great happiness to think President Davis can furnish arms for all who come.

Our Albermarle country is very much changed by the fall of Roanoke Island.  Brother William has moved his people to Chatham County & burned his cotton.  Brother Charles is here now to forward some of his Negroes to Cherry Hill but he intends remaining on his plantation for the present.  He believes his Negroes will stand by him, as they have seen enough to make them know their master is their best friend.  Two thousand Yankees with four [?] of artillery took possession of Columbia the other day.  They committed several petty thefts, broke up some crockery, tore up one woman’s clothes & [carried?] off thirteen Negroes.  None other were willing to try them.  They have not yet gone to the Lake.  I hope they will from there by, but I see little chance for it.

Annie is with Grandma, who looks much better that she did last summer.  [Carey?] intends remaining in Hillsborough for several months.  I left the Hospital to stay with her until she leaves for Cherry Hill.  Brother Charles was obliged to be absent.  Perhaps then I will return to the Hospital, if they need me there.  The Hillsborough people have been as kind as possible to the refugees.  Carey they met like a dear friend.

I hope you received the stockings Mrs. Marshall knit for you & which Genl. Martin sent to you from Richmond, with my letter.  Do write to me, Johnston, I would be truly delighted to hear from you.

I understand we have twenty five thousand troops at Wilmington, Goldsborough & Kinston.  I wish we might have a great battle & whip, the Yankees there.  They seem to have the game in their own hands, & can attack us at any point the see fit.

I am glad our handful of troops fought so well at New bern.  Old Gatlin was intoxicated at Goldsboro  -– 1 report says) And Branch was no military man.  He did as well as could have been expected.  He showed great coolness & bravery & took the counsel of the Colonels who knew something of the business,  Our defences were good, but our [?] inadequate.  A Northern man who had lived eighteen years in the country, lead the gun boats up the river thought a small channel which had been left open for ourselves.

I am asked many questions about you and the Generalcy.  Why did you not accept the honors?  I wish you could do something to change the aspect of our affairs.

Mrs. Johnston is at Hayes & sick.  [Janey?] Johnston with him there.

With a great deal of love my dear Johnston.  Ever your affectionate sister, M.B.P.