11 April 1862: “our forces are at corinth it the opinion of some that the enemy will leave the river wile the water is up they may stay there but if they get out of reach of their boats they will be badly whiped but I tell you there no use fighting their gun boats.”

Item description: A letter written by John W. Taylor in Corinth, Miss., dated 11 April 1862, gives a detailed description of his experience in the Battle of Shiloh.

More about John W. Taylor: John W. Taylor (b. 1837) was born in Yalobusha County, Mississippi, and served in the Confederate Army with the 15th Mississippi Regiment, Company D. Although he wrote in this letter to “Tell Steward that I want him to stay at home,” Taylor’s brother Stewart appears to have later enlisted in the Confederate Army.  It is unclear whether either brother survived the war. 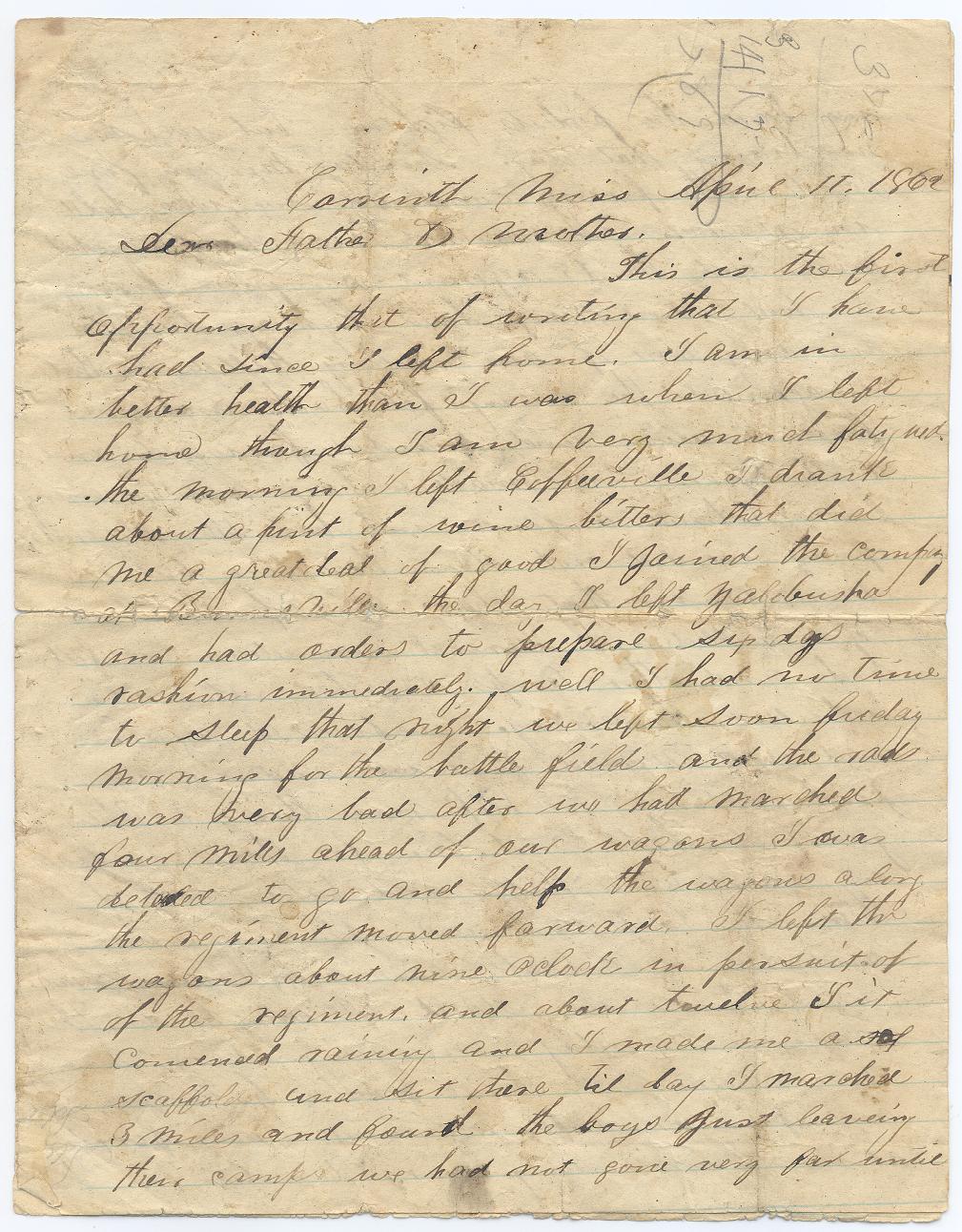 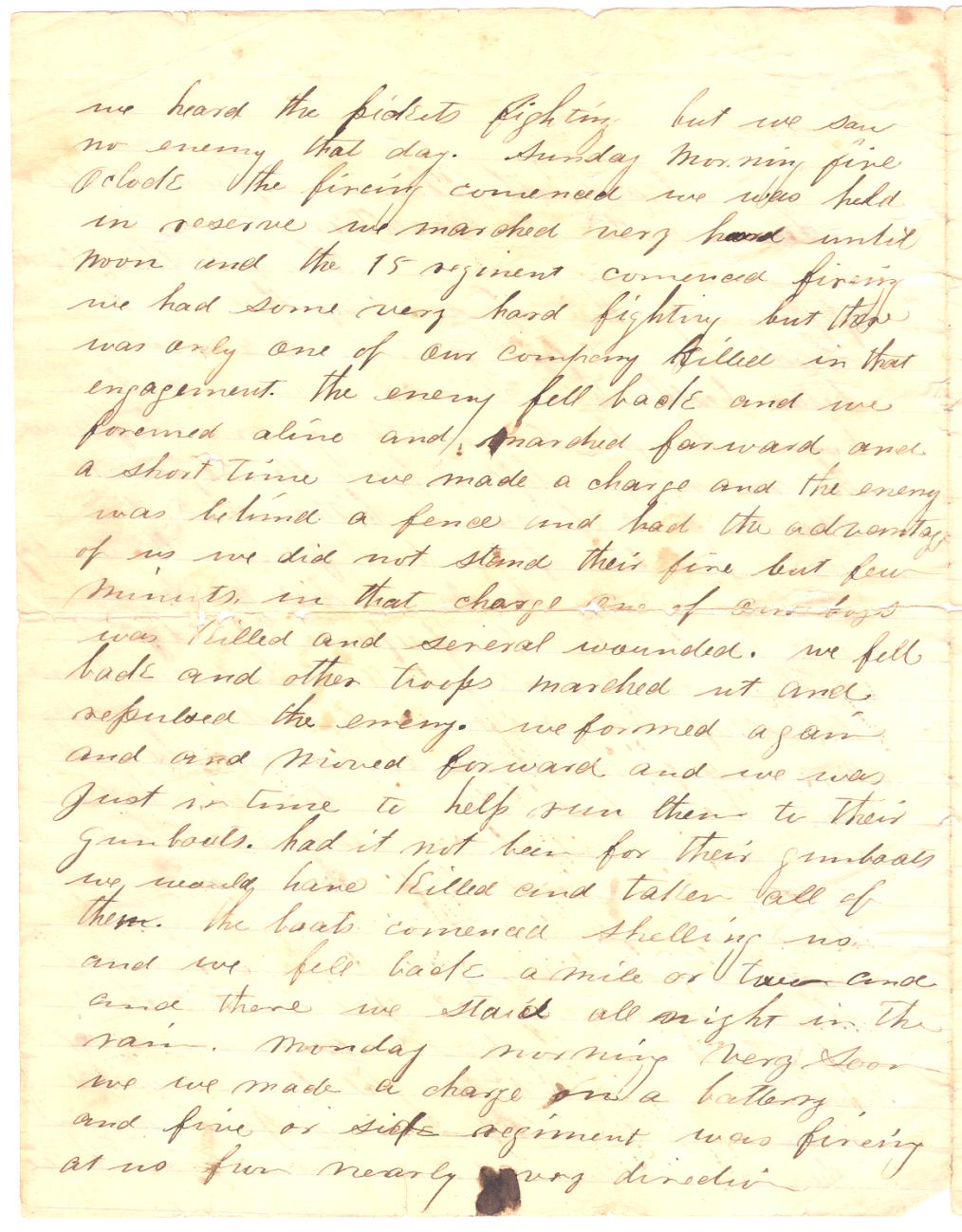 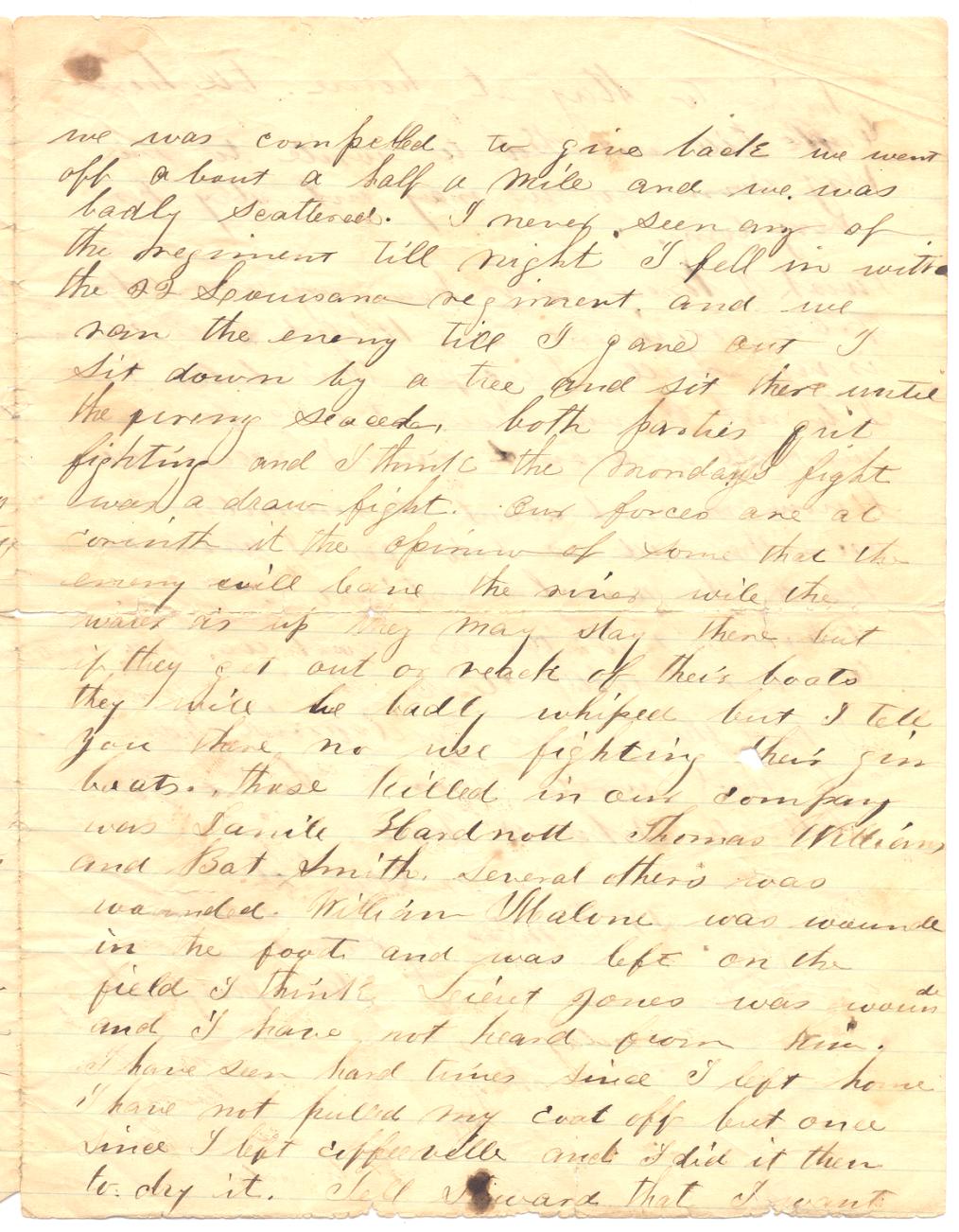 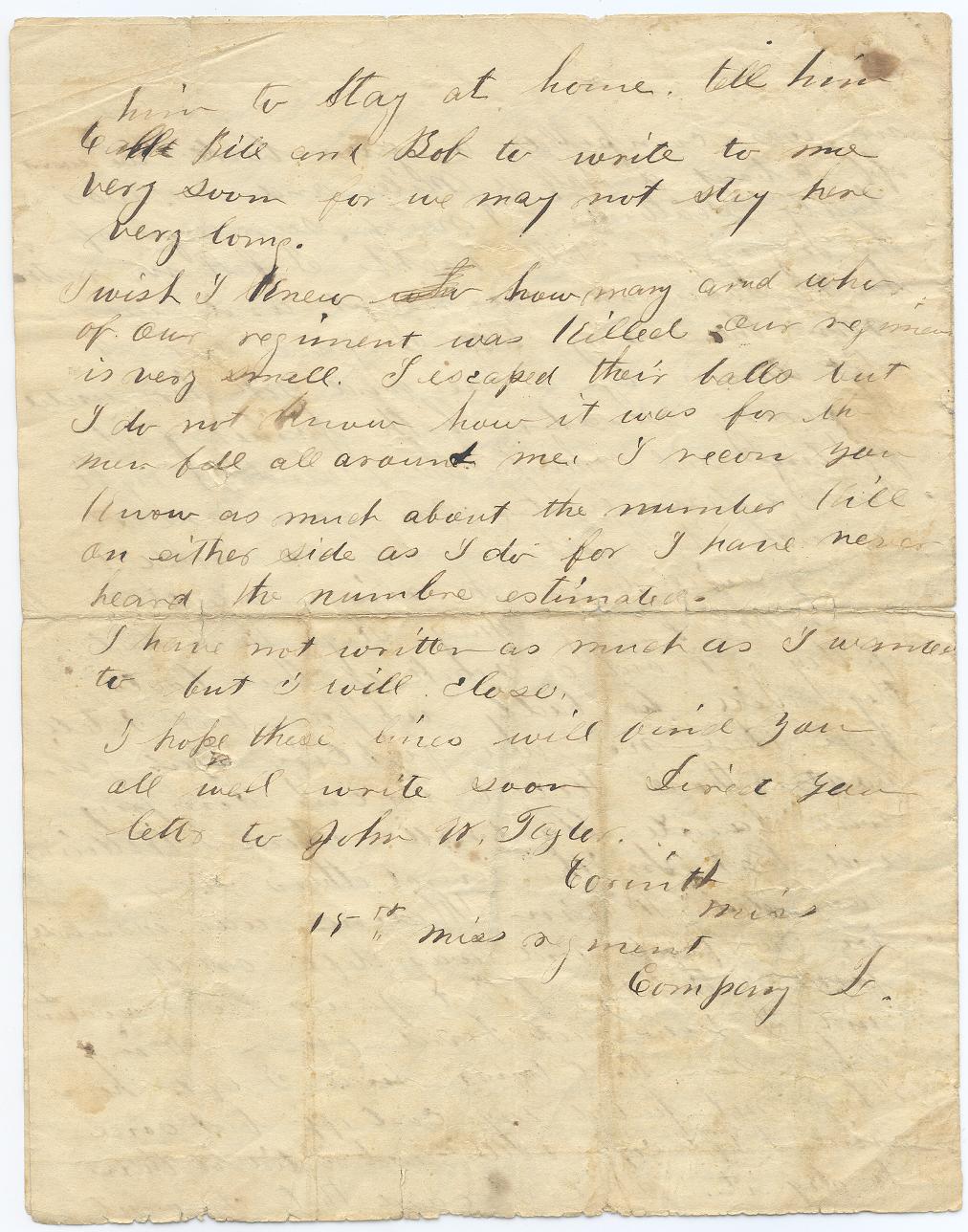 This is the first opportunity that of writing that I have had since I left home. I am in better health than I was when I left home though I am very much fatigued. the morning I left Coffeeville I drank about a pint of wine bitters that did me a great deal of good I joined the company at B[?]ville the day I left Yalobusha and had orders to prepare six days rashion immediately. well I had no time to sleep that night we left soon friday morning for the battle field. and the roads was very bad after we had marched four miles ahead of our wagons I was [detained?] to go and help the wagons a long the regiment moved forward. I left the wagons about nine o clock in pursuit of of the regiment, and about twelve I it comensed raining and I made me a scaffold and sit there til day I marched 3 miles and found the boys just leaveing their camps we had not gone very far until we heard the pickets fighting but we saw no enemy that day. Sunday morning five o clock the fireing comenced we was held in reserve we marched very hard until noon and the 15 regiment comenced fireing we had some very hard fighting but there was only one of our company killed in that engagement. the enemy fell back and we foremed a line and marched forward and a short time we made a charge and the enemy was behind a fence and had the advantage of us we did not stand their fire but few minuts, in that charge one of our boys was killed and several wounded. we fell back and other troops marched [at?] and repulsed the enemy. we formed again and and moved forward and we was just in time to help run them to their gunboats. had it not been for their gunboats we would have killed and taken all of them. the boats comenced shelling us and we fell back a mile or two and there we staid all night in the rain. monday morning very Soon we we made a charge on a battery and five or six regiment was fireing at us from nearly every direction

we was compelled to give back we went off about a half a mile and we was badly scattered. I never seen any of the regiment till night I fell in with the 22 Louisana regiment and we ran the enemy till I gave out I Sit down by a tree and sit there until the fireing seaced, both parties quit fighting and I think the Mondays fight was a draw fight. our forces are at corinth it the opinion of some that the enemy will leave the river wile the water is up they may stay there but if they get out of reach of their boats they will be badly whiped but I tell you there no use fighting their gun boats. those killed in our company was Danile Hardnott Thomas Williams and Bat Smith, several others was wounded. William Malone was wounde in the foot and was left on the field I think Lieut Jones was wounde and I have not heard from him. I have seen hard times since I left home I have not pulled my coat off but once since I left coffeeville and I did it then to dry it. Tell Steward that I want him to stay at home. tell him [Call?] Bill and Bob to write to me very soon for we may not stay here very long.

I wish I knew how many and who of our regiment was killed our regimen is very small. I escaped their balls but I do not know how it was for the men fall all around me. I recon you know as much about the number kill on either side as I do for I have never heard the numbers estimated.

I have not written as much as I wanted to but I will close.