18 June 1862: “I hear he gives as an excuse for running that his powder was wet, that is story for it had been a fine day and every gun cracked as clear as a whistle.”

Posted on 18 Jun ’12 by Biff Hollingsworth

Item description: Letter, 18 June 1862, from Benjamin Edward (“Eddy”) Stiles Jr., of the 16th Georgia Volunteer Infantry Regiment, to his mother Mary Ann Mackay Stiles. He writes of war news (such as J.E.B. Stuart’s June 1862 ride around the Army of the Potomac during the Peninsula Campaign), gives updates about many members of his regiment, and inquires about people and events on the home front. 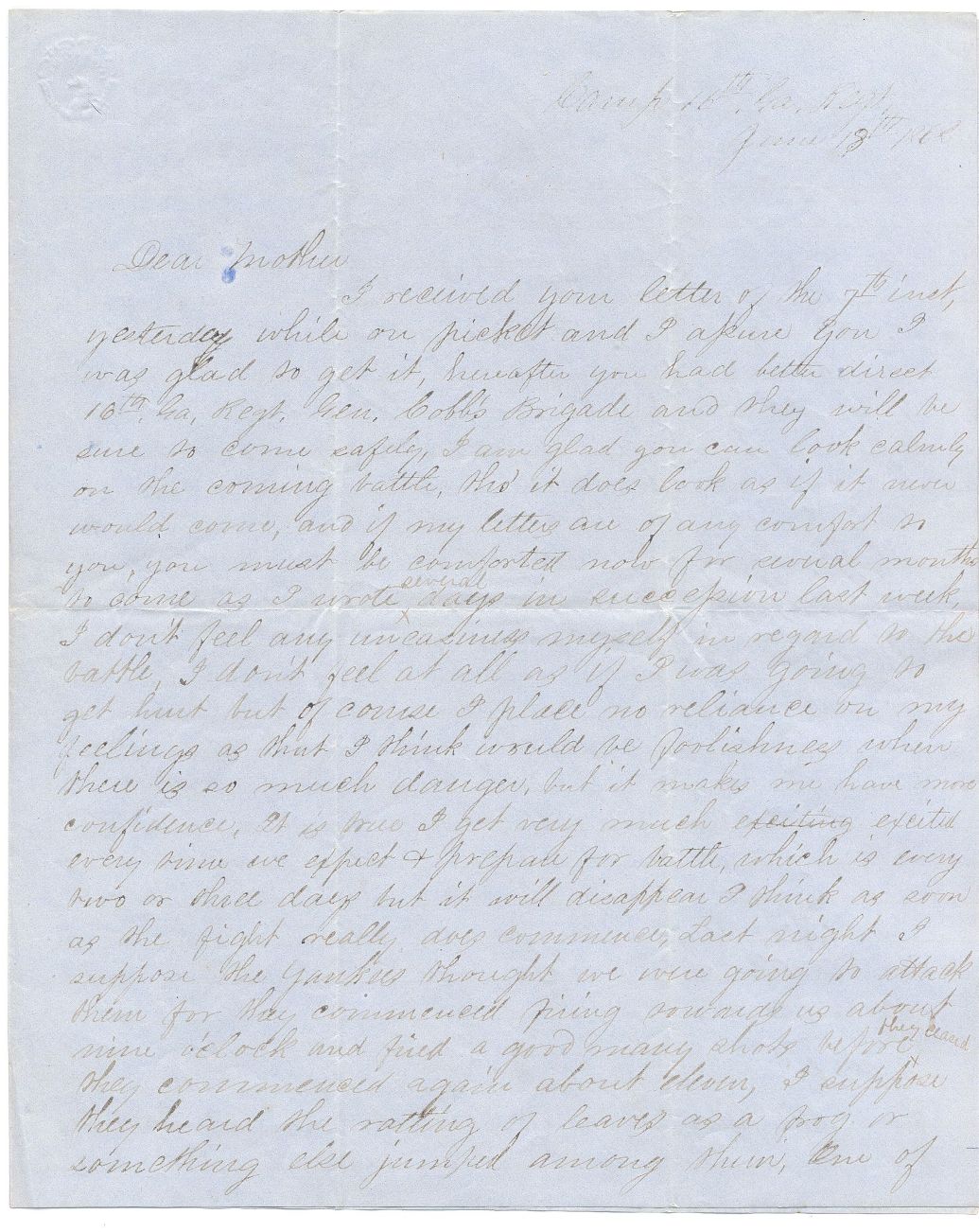 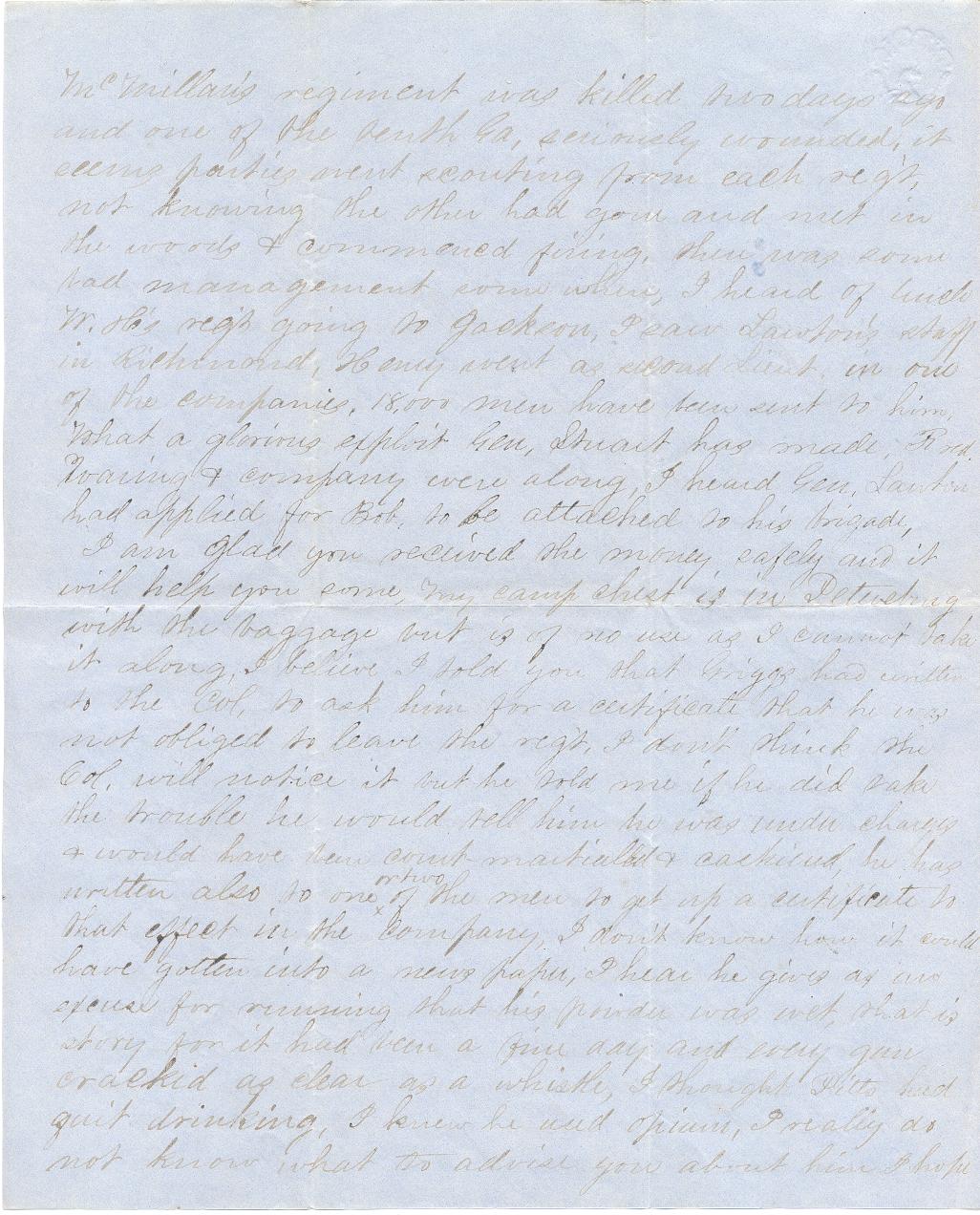 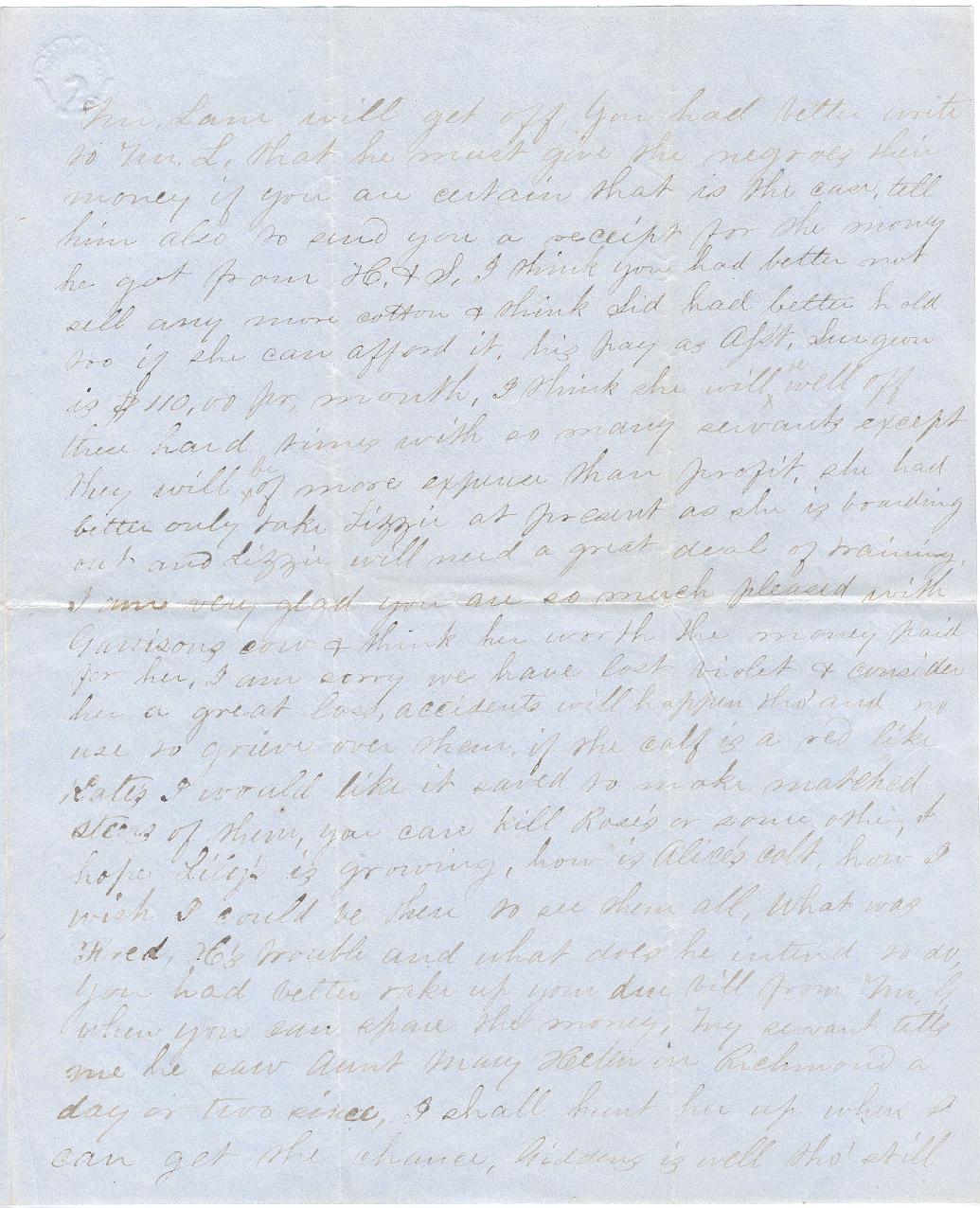 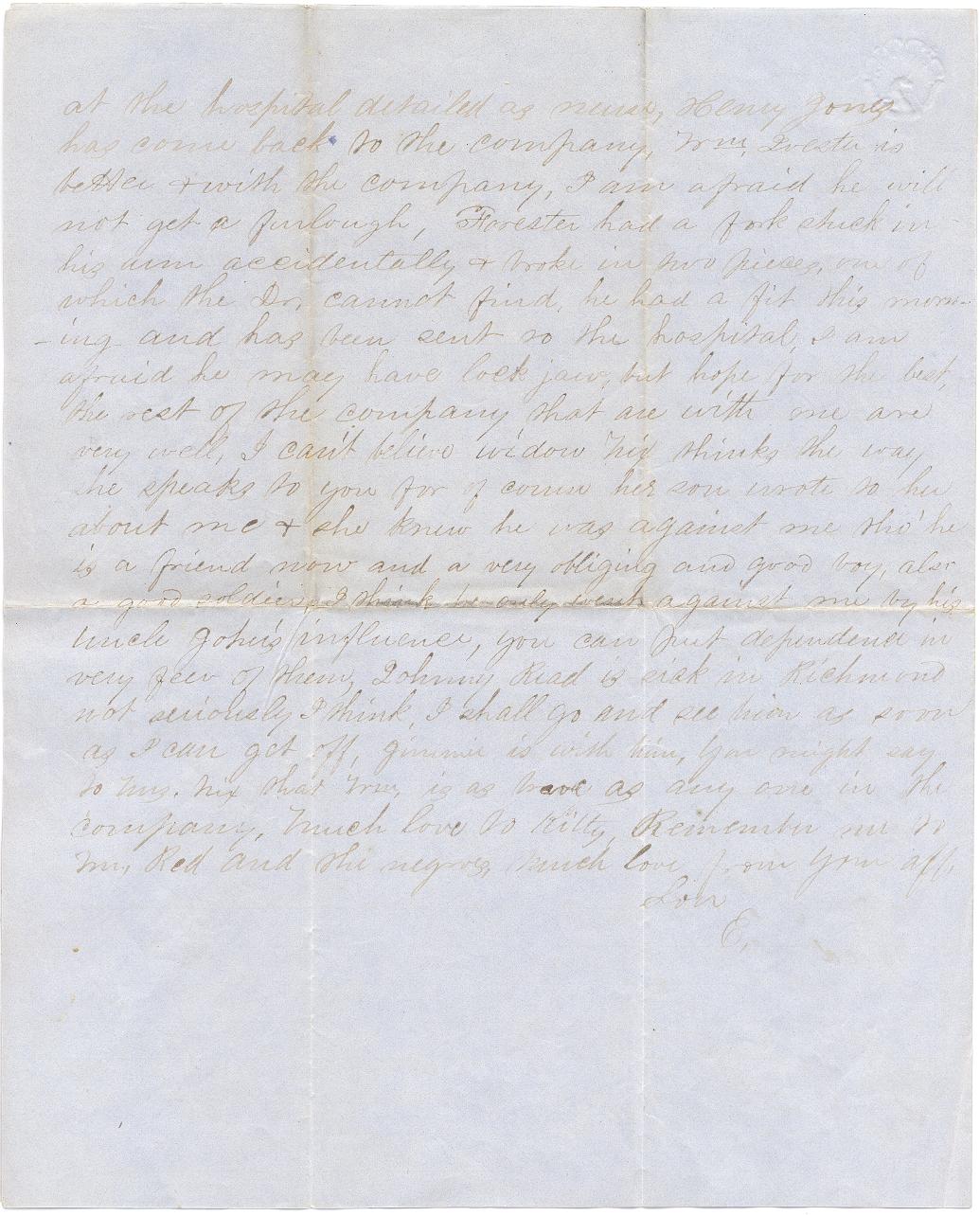 I received your letter of the 7th inst, yesterday while on picket and I assure you I was glad to get it, hereafter you had better direct 16th Ga. Regt. Gen. Cobb’s Brigade and they will be sure to come safely, I am glad you can look calmly on the coming battle, tho’ it does look as if it never would come, and if my letters are of any comfort to you, you must be comforted now for several months to come as I wrote several days in succession last week. I don’t feel any uneasiness myself in regard to the battle, I don’t feel at all as if I was going to get hurt but of course I place no reliance on my feelings as that I think would be foolishness when there is so much danger, but it makes me have more confidence. It is true I get very much excited every time we expect & prepare for battle, which is every two or three days but it will disappear I think as soon as the fight really does commence. Last night I suppose the Yankees thought we were going to attack them for they commenced firing towards us about nine o’clock and fired a good many shots before they ceased. they commenced again about eleven, I suppose they heard the ratling of leaves as a frog or something else jumped among them. One of McMillan’s regiment was killed two days ago and one of the tenth Ga. seriously wounded. it seems parties went scouting from each reg’t., not knowing the other had gone and met in the woods & commenced firing, there was some bad management some where, I heard of [?] W. H.’s regt. going to Jackson. I saw Lawton’s staff in Richmond, Henry went as second Lieut. in one of the companies. 18,000 men have been sent to him. What a glorious exploit Gen. Stuart has made. [?] Waring & company were along. I heard Gen. Lawton had applied for Bob to be attached to his brigade.

I am glad you received the money safely and it will help you some. My camp chest is in Petersburg with the baggage but is of no use as I cannot take it along. I believe I told you that Griggs had written to the Col. to ask him for a certificate that he was no obliged to leave the regt. I don’t think the Col. will notice it but he told me if he did take the trouble he would tell him he was under charges & would have him court-martialed & [?]. he has written also to one or two of the men to get up a certificate to that effect in the company. I don’t know how it could have gotten into a news paper. I hear he gives as an excuse for running that his powder was wet, that is story for it had been a fine day and every gun cracked as clear as a whistle. I thought Pitts had quit drinking, I knew he used opium, really do not know what to advise you about him. I hope Mr. [Lam?] will get off. You had better write to Mr. L. that he must give the negroes their money if you are certain that is the case. tell him also to send you a receipt for the money he got from H. & S. I think you had better not sell any more cotton & think Sid had better hold too if she can afford it. his pay as Asst. Surgeon is $110.00 per month. I think she will be well off these hard times with so many servants except they will be of more expense than profit. she had better only take Lizzie at present as she is boarding out and Lizzie will need a great deal of training. I am very glad you are so much pleased with Garrison’s cow & think her worth the money paid for her. I am sorry we have lost Violet & consider her a great loss, accidents will happen tho’ and no use to grieve over them if the calf is a red like Kate’s I would like it saved to make matched steers of them. You can kill Rose’s or some other. I hope Lily’s is growing. how is Alice’s colt. how I wish I could be there to see them all. What was Fred H’s trouble and what does he intend to do. You had better [rake?] up your due bill from Mr. G. when you can spare the money. My servant tells me he saw Aunt Mary Helen in Richmond a day or two since. I shall hunt her up when I can get the chance. Giddens is well tho’ still at the hospital detailed as nurse. Henry Jones has come back to the company, Wm. [?] is better & with the company. I am afraid he will not get a furlough. Forester had a fork stuck in his arm accidentally & broke in two pieces, one of which the Dr. cannot find. he had a fit this morning and has been sent to the hospital. I am afraid he may have lockjaw, but hope for the best. the rest of the company that are with me are very well. I can’t believe widow Nix thinks the way she speaks to you for of course her son wrote to her about me & she knew he was against me tho’ he is a friend now and a very obliging and good boy. also a good soldier. I think he only [?] against me by his Uncle John’s influence. you can but dependend in very few of them. Johnny Read is sick in Richmond not seriously I think. I shall go and see him as soon as I can get off. Jimmie is with him. You might say to Mrs. Nix that Wm. is as brave as any one in the company. Much love to Kitty, Remember me to my Red and the negroes. Much love from your aff. Son, E.