14 August 1862: “I feel that I am not as yet in fit condition to undertake a weary march under an August sun…”

Posted on 14 Aug ’12 by Biff Hollingsworth

Item description: Letter, 14 August 1862, from Charles Woodward Hutson to his mother. The letter also includes two follow up notes: one dated 15 August 1862, and one undated. 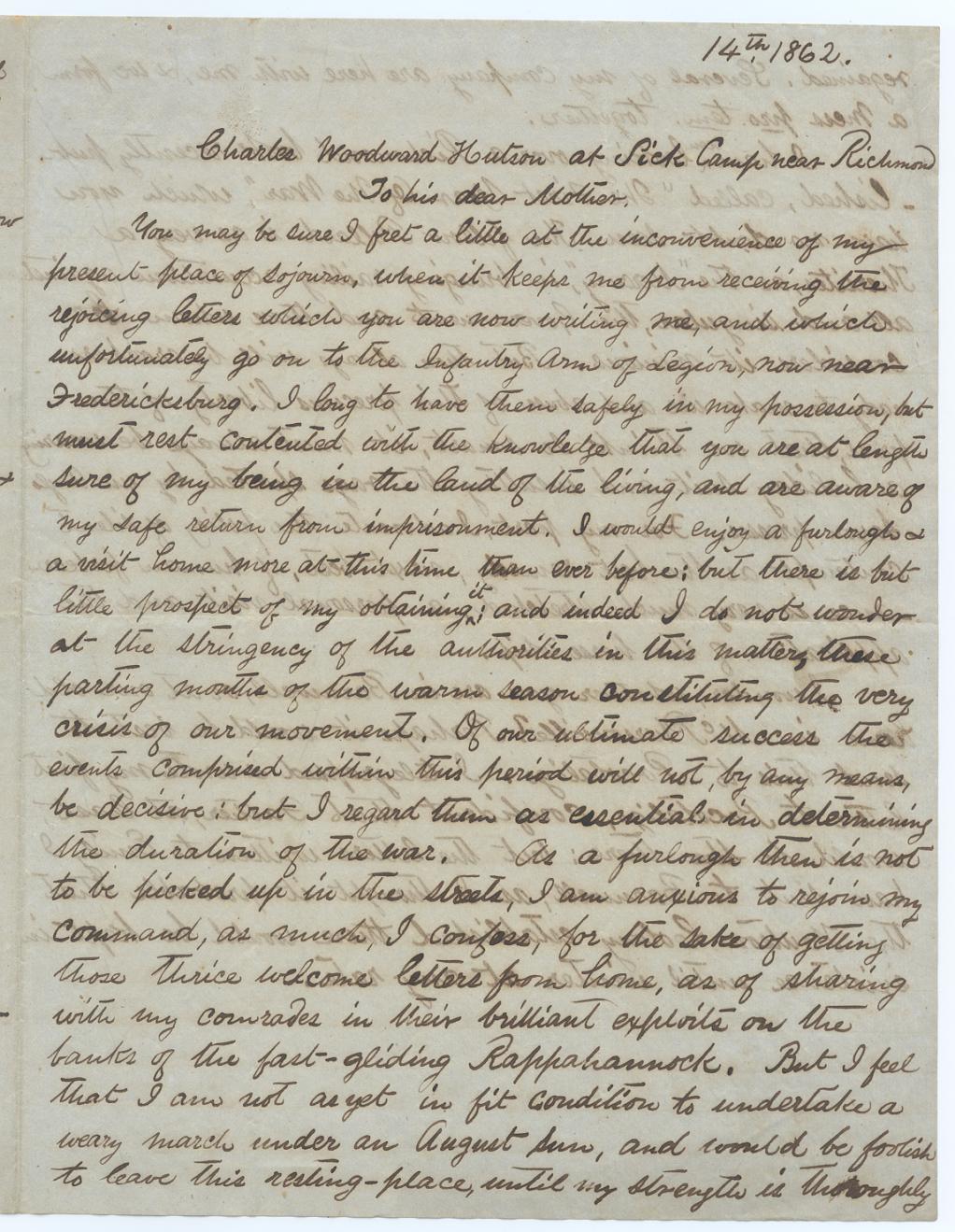 To his dear Mother,

You may be sure I fret a little at the inconvenience of my present place of sojourn, when it keeps me from receiving the rejoicing letters which you are now writing me, and which unfortunately go on to the Infantry Arm of Legion, now near Fredericksburg. I long to have them safely in my possession, but must rest contented with the knowledge that you are at length sure of my being in the land of the living, and are aware of my safe return from imprisonment. I would enjoy a furlough & a visit home more at this time than ever before; but there is but little prospect of my obtaining it; and indeed I do not wonder at the stringency of the authorities in this matter, these parting months of the warm season constituting the very crisis of our movement. Of our ultimate success the events comprised within this period will not, by any means, be decisive; but I regard them as essential in determining the duration of the war. As a furlough then is not to be picked up in the streets, I am anxious to rejoin my command, as much, I confess, for the sake of getting those thrice welcome letters from home, as of sharing with my comrades in their brilliant exploits on the banks of the fast-gliding Rappahannock. But I feel that I am not as yet in fit condition to undertake a weary march under an August sun, and would be foolish to leave this resting place, until my strength is thoroughly regained. Several of my company are here with me, & we form a mess pro tem together.

I have been looking over a Richmond book recently published, called “The First Year of the War,” which you have no doubt seen. The fellow Pollard is as very a Thersites as the “Mercury,” in bringing railing accusations against all and singular, the Government and those whom he considers its minions. But there always will be croakers ready to make use and abuse of this precious liberty of the press, that we think so smart, it must always be wearing a holiday suit and insulting the rags sported by un-Anglo-Saxon presses. For my part, I advocate the policy of silent contempt as the best remedy, next best, if human forbearance is very much stretched, a personal visit and the application of the horse-whip.

I wonder, whether you are in Barnwell, or at our old home in McPhersonville? Perhaps it would be best to send this to Pocotaligo. I telegraphed & wrote my first letter to Pocotaligo, confident that Father, at least would be there; but the letters written to Emily I have sent to Barnwell, as I thought it probable that the Hutson Colony established there would be kept in existence until winter at any rate.

15th. August. Last night I had the pleasure of seeing John Gardner, fresh from camp. He reports the command as at a point some three miles beyond Hanover Junction, but only temporarily in camp there, as they were to have moved on toward Fredericksburg today. Hood treats them to slow marches, judiciously moving only in the cool of the evening and some hours after night-fall, and in the cool of the morning, giving them, besides their nights rest, the heat of the day to loll at their ease. John is now enjoying the comfortable, though somewhat laborious, berth of medical Secretary to Darby, who is now Surgeon in Chief of the Division. It was a business mission, which brought him back to Richmond. He met Logan in the city, the latter being on his way to resume command of the company, which will be very gratifying to the men, as from all accounts they were growing more discontented, day after day, with their other officers. I am truly thankful that I have never mixed myself up with any of the cliques in the company, and have taken but little interest in the results of elections, except that I wished to see Logan always at the head of the company. Men of all parties, I am happy to say, have now the most unbounded confidence in him.

The general impression seems to be that McClellan is rapidly withdrawing his forces from the banks of the James to support the armies of Pope, McDowell and Burnside which are to resume McDowell’s last year’s onward march to Richmond, varied this year with the phenomena of separate columns and the nearer basis of the Rapidan and the Rappahannock instead of the Potomac.

But we have now to contend with these forces of the enemy a powerful army, concentrated on the plains of Virginia from every part of the Confederacy, flushed with recent victories of a splendour and brilliancy hitherto without precedent in this country, and fully competent in every respect to contend with the combined armies now hurled against them. If we can only strike the decisive blow before the six-hundred thousand new levies appear on the field of action, I do not think these latter will ever appear. But should these, or even a part of them, meet us, I entertain no doubt of their easy and utter extinction; for, put into the field in such hot haste without previous drill and discipline & raw to the camp, the bivouack and the march, they will prove as great a nuisance on the battle-field to the disciplined and to themselves, as were the war-elephants brought to Pyrrhus against the Romans, when the latter applied torches to their trunks. When, too, we beat them this time, they will have a long retreat to make, or in case of panic a long race to run, before they can reach the Potomac. The remaining warm months I assign for the last act of the tragedy, and I think the month of November will find the North treating for peace. You see, my hopes are bright.

I have got to the end of my paper, so kiss my hand to you, and close. My love to Father, and all dear friends.

I am glad to hear that C.J’s wound has improved so much but he must not come back to camp-life, for a long time yet. As he very truly observes in his letter to me, our cause is no longer in a precarious condition. We have been triumphant, and we are, with good reason, confident. It is a time when they who have borne the heat and brunt of the contest should feel at liberty to rest a little.  I had heard before through Daughter, that Cousin Patty Martin now bears the holy name of Mother as well as the tender one of Wife. The little girl is born in troublous times; but I dare say she will be as merry & gleesome, as other lasses. I expect to have a share in her bringing up, for as a confirmed old bachelor it will be my privilege to assist in the merry-makings of all the young people. Tell C.J. that I envy him greatly the meat supper at Mr. Fraser Gregorie’s, of which you told me. You must not send me the flannel shirt now, for I could not carry it.

I am still at the sick camp, though I feel much stronger. The fact is, I would like to hear from Logan before reporting for duty, as he may send me on the paper of transfers with signatures appended, & then there may be something to be done in Richmond. Besides I really do not feel strong enough yet to take a march of any considerable distance.

My love to Father, Em, Frances, Charley, Mac & all friends.

You must tell Em. that my back feels so broken by the writing that I have done this evening, that I must postpone writing to her.

This entry was posted in Southern Historical Collection and tagged Charles Woodward Hutson. Bookmark the permalink.