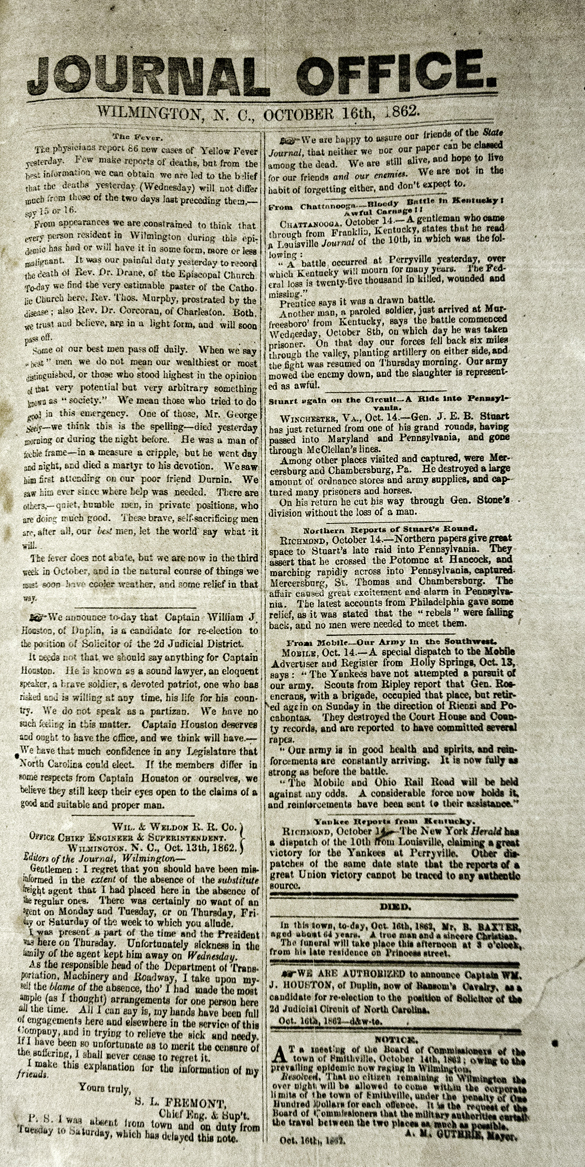 The physicians report 86 new cases of Yellow Fever yesterday.  Few make reports of deaths, but from the best information we can obtain we are led to the belief that the deaths yesterday (Wednesday) will not differ much from those of the two days last preceding them,—say 15 or 16.

From appearances we are constrained to think that every person resident in Wilmington during this epidemic has had or will have it in some form, more or less malignant.  It was our painful duty yesterday to record the death of Rev. Dr. Drane, of the Episcopal Church.  To-day we find the very estimable paster of the Catholic Church here, Rev. Thos. Murphy, prostrated by the disease; also Rev. Dr. Corcoran, of Charleston.  Both we trust and believe, are in a light form, and will soon pass off.

Some of our best men pass off daily.  When we say “best” men we do not mean our wealthiest or most distinguished, or those who stood highest in the opinion of that very potential but very arbitrary something known as “society.”  We mean those who tried to do good in this emergency.  One of those, Mr. George Seely—we think this is the spelling—died yesterday morning or during the night before.  He was a man of feeble frame—in a measure a cripple, but he went day and night, and died a martyr to his devotion.  We saw him first attending on our poor friend Durnin.  We saw him ever since where help was needed.  There are others,—quiet, humble men, in private positions, who are doing much good.  These brave, self-sacrificing men are, after all, our best men, let the world say what it will.

The fever does not abate, but we are now in the third week in October, and in the natural course of things we must soon have cooler weather, and some relief in that way.