Posted on 14 Feb ’13 by Biff Hollingsworth 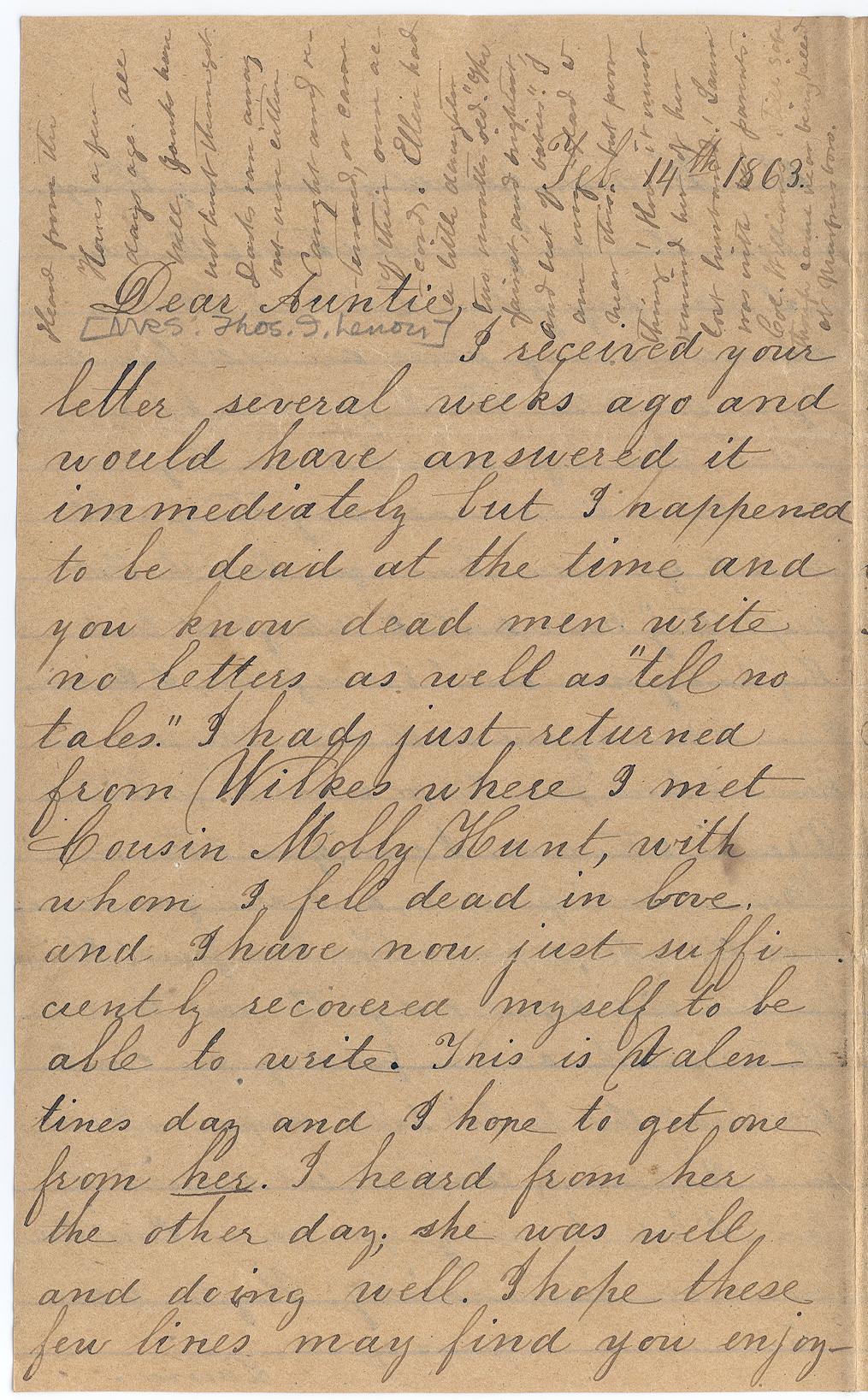 I received your letter several weeks ago and would have answered it immediately but I happened to be dead at the time and you know dead men write no letters as well as “tell no tales.” I had just returned from Wilkes where I met Cousin Molly Hunt, with whom I fell dead in love, and I have now just sufficiently recovered myself to be able to write. This is Valentines day and I hope to get one from her. I heard from her the other day; she was well and doing well. I hope these few lines may find you enjoying the same blessing. As I have written no Valentines here goes one for you.

“Peace be around thee where ever rovest thou
May life be for thee one summer’s day
And all that thou wishest and all that thou lovest
Come smiling around thy sunny way!
If sorrow e’er this calm should break
May even thy tears pass off so lightly
Like spring showers they’ll only make
The smiles that follow shine more brightly.”
Jim.

Now you see, you never can guess who wrote this valentine, certainly. If I can get one from my sweet heart that comes as much from her heart as this one does from mine, I will be satisfied. We have just had the heavyest snow that has fallen here for several winters. It has almost disappeared, but was about a foot at first. It had a hard sleek crust on it strong enough to bear, and we had lots of fun skating and sliding. We had several hard, piched battles with snow balls.

It is getting late and I must close, so you must give my love to Miss. Mat. John Harper sends his also. [?] sends his love to you.

Dear Lizzie,
I would have written to you myself long ago but I thought this chap wrote to you last Christmas. But there’s no dependence to be placed in the He tribe, generally speaking, though I hope there are a few exceptions to the rule. I hope my future Lord and Master (who ever he is) may prove and exception, and you doubtless think yours is, but now [], these boys don’t look like they would ever learn to remember any thing. Lili wrote to you some time ago. As to the Fort people they “never write to Woody.” at least they “hardly never writes” but as for me, I expect I am to break my neck writing letters. All well here have not heard from Fort for several days. Sister & Mama both well. I sent your letter no to Mama but opened it, and also gave uncle Wat the note for him. Poor Wat Jones! He has been sick a great deal for the past two or three months, and a few days ago cousin Ed heard that he had had a relapse and was in a Richmond Hospital not expected to live. I hope he may yet recover. Cous. Ed went on immediately. My love to uncle Tom.

Hear from the Howes a few days ago. All well. Yanks have not bust through. Darks ran away but were either caught and returned, or came of their own accord. Ellen had a little daughter two months old. “The fairest, and brightest, and best of babies.” I am very glad to hear this, but poor thing! How it must remind her of her lost husband! Laura was with her parents. Col. Williams still safe though came near being killed at Murfreesboro.”