24 February 1863: “Promenading and flirting wound up the affair about eleven o’clock.”

Posted on 24 Feb ’13 by Biff Hollingsworth

Item description: Portions of “Leaves from a Diary Written While Serving in Co. E, 44 Mass., Dep’t of No. Carolina,” an account, written by John Jasper Wyeth of Co. E, of the experiences of the 44th Massachusetts Infantry Regiment. The book includes this letter written on 24 February 1863. 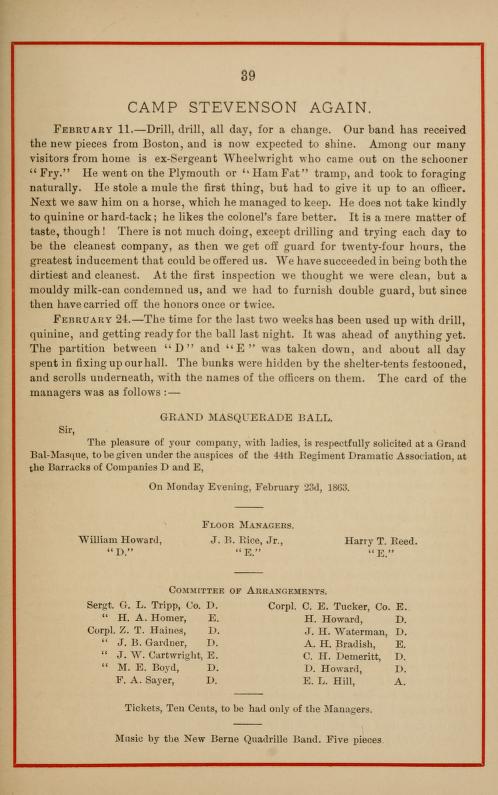 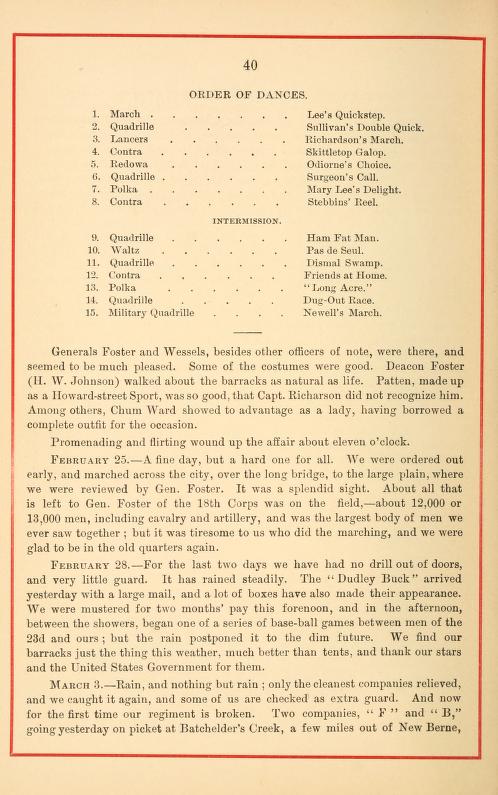 FEBRUARY 24. — The time for the last two weeks has been used up with drill, quinine, and getting ready for the ball last night. It was ahead of anything yet. The partition between “D” and “E” was taken down, and about all day spent in fixing up our hall. The bunks were hidden by the shelter-tents festooned, and scrolls underneath, with the names of the officers on them. The card of the managers was as follows : —

The pleasure of your company, with ladies, is respectfully solicited at a Grand Bal-Masque, to be given under the auspices of the 44th Regiment Dramatic Association, at the Barracks of Companies D and E,

Tickets, Ten Cents, to be had only of the Managers.

Generals Foster and Wessels, besides other officers of note, were there, and seemed to be much pleased. Some of the costumes were good. Deacon Foster (H. W. Johnson) walked about the barracks as natural as life. Patten, made up as a Howard-street Sport, was so good, that Capt. Richarson did not recognize him. Among others, Chum Ward showed to advantage as a lady, having borrowed a complete outfit for the occasion.

Promenading and flirting wound up the affair about eleven o’clock.