5 March 1863: “On hobbling back to Raleigh, he finds himself superseded by Col. August…”

Posted on 5 Mar ’13 by Biff Hollingsworth 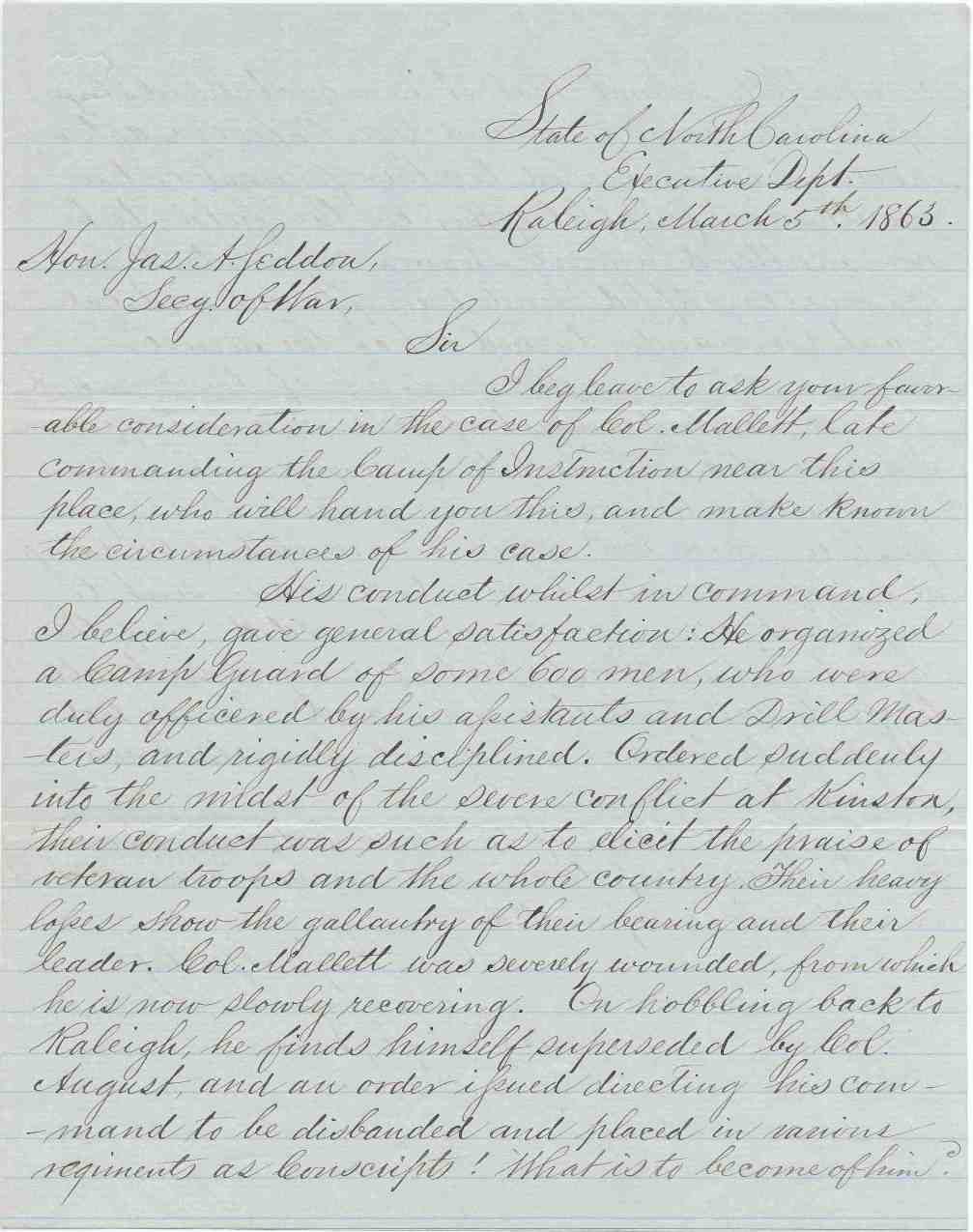 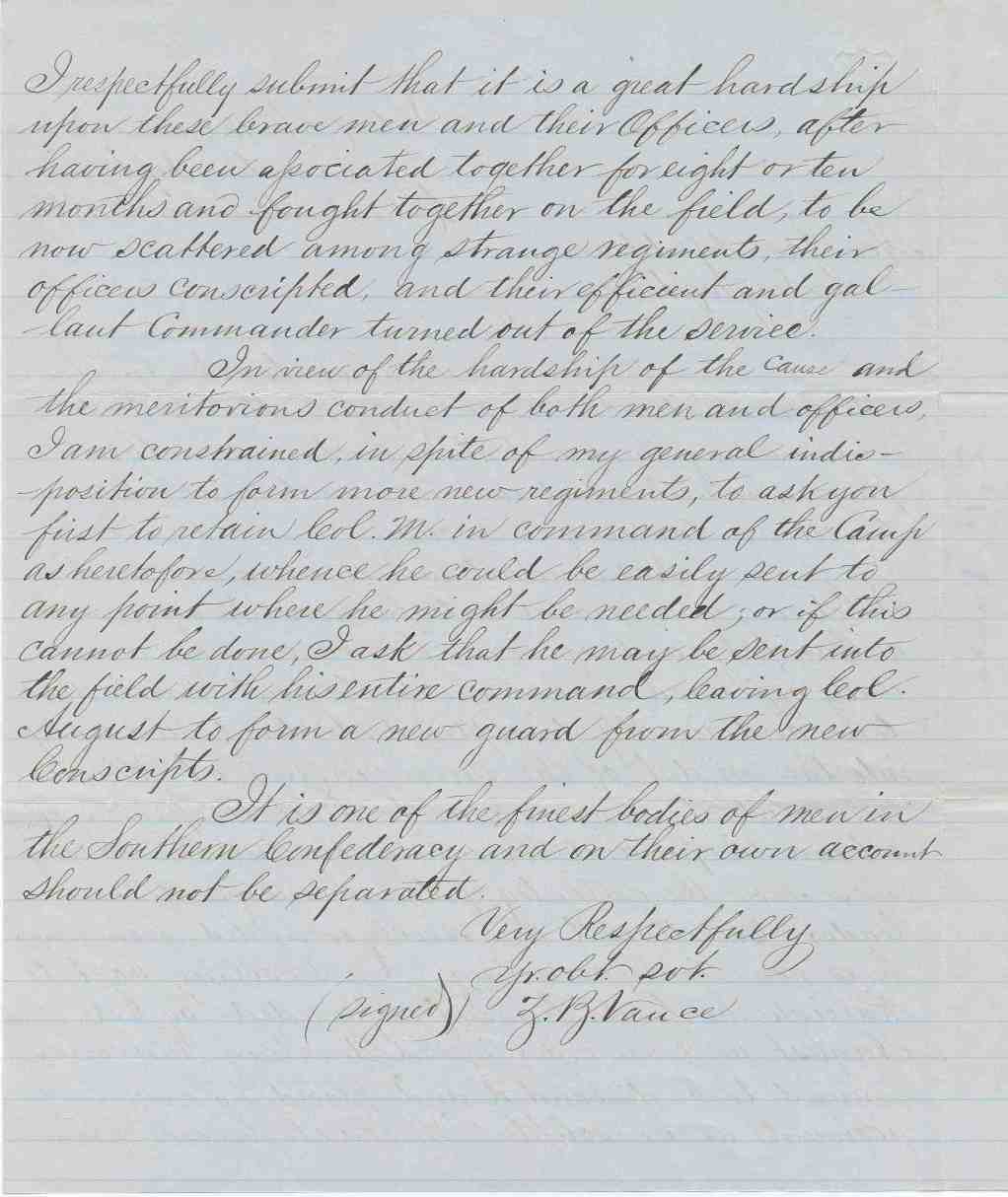 I beg leave to ask your favor-able consideration in the case of Col. Mallett, late commanding the Camp of Instruction near this place, who will hand you this, and make known the circumstances of his case.

His conduct whilst in command, I believe, gave general satisfaction: He organized a Camp Guard of some 600 men, who were duly officered by his assistants and Drill Mas-ters, and rigidly disciplined. Ordered suddenly into the midst of the severe conflict at Kinston, their conduct was such as to elicit the praise of veteran troops and the whole country. Their heavy losses show the gallantry of their bearing and their leader. Col. Mallett was severely wounded, from which he is now slowly recovering.  On hobbling back to Raleigh, he finds himself superseded by Col. August, and an order issued directing his com-mand to be disbanded and placed in various regiments as conscripts! What is to become of him?

I respectfully submit that it is a great hardship upon these brave men and their officers, after having been associated together on the field, to be now scattered among strange regiments, their officers conscripted, and their efficient and gal-lant Commander turned out of the service.
In view of the hardship of the cause and the meritorious conduct of both men and officers, I am constrained, in spite of my general indis-position to form more new regiments, to ask you first to retain Col. M. in command of the Camp as heretofore, whence he could be easily sent to any point where he might be needed; of if this cannot be done, I ask that he may be sent into the field with this entire command, leaving Col. August to form a new guard from the new conscripts.
It is one of the finest bodies of men in the Southern Confederacy and on their own account should not be separated.

More about this item: Peter Mallett (1825-1906?) was a merchant and railroad agent of Fayetteville, N.C., and New York City; and a Confederate Army officer and head of Confederate conscription in North Carolina.

Zebulon Baird Vance was born in Buncombe County, N.C., on 13 May 1830.  At 24, he ran for and won a seat in the North Carolina State House of Commons, and was elected to the United States House of Representatives in 1858. As a supporter of the Union and states rights, he resigned his position when North Carolina appeared to be leaning toward secession. During the Civil War, Vance was a captain in the 14th North Carolina Infantry Regiment and a colonel in the 26th North Carolina Infantry Regiment. In 1862, he was elected governor of North Carolina, where his efforts on the behalf of his constituents earned him the nickname “War Governor of the South.” He was reelected in 1864, arrested by Federal troops in 1865, and later returned to the practice of law. In 1870, the state legislature elected him to the United States Senate, but since he was still under parole, he could not serve. He was reelected as governor in 1876 and United States Senator in 1879, in which capacity he served until his death on 14 April 1894.