9 June 1863: ” Your name was in the list of supposed prisoners, but for the most part all was vague and uncertain…”

Posted on 9 Jun ’13 by Biff Hollingsworth

William H. Thomson, born in Hillsborough, N.C., lived there and in Chapel Hill, N.C., attending the University of North Carolina. He taught in Alabama and attended medical school at Transylvania University. He practiced first in Tennessee, where he married Hannah Lavinia in 1831. In 1835, Thomson moved to Hinds County, Miss., where he lived thereafter at a place called Spring Ridge, combining medical practice with the operation of a small plantation.

Ruffin Thomson was the oldest child and only son of William H. Thomson and Hannah Lavinia Thomson. He studied at the University of Mississippi and the University of North Carolina, leaving school in 1861 to enter the Confederate Army, serving as a private until February 1864, when he was commissioned a second lieutenant in the Confederate Marine Corps. After the Civil War, he studied medicine in New Orleans and began a practice in Hinds County. In 1873, he married Fanny Potter. In 1888, he went to Fort Simcoe, Washington Territory, as clerk to the Yakima Indian Agency, hoping to recover his failing health, but instead died soon after his arrival. 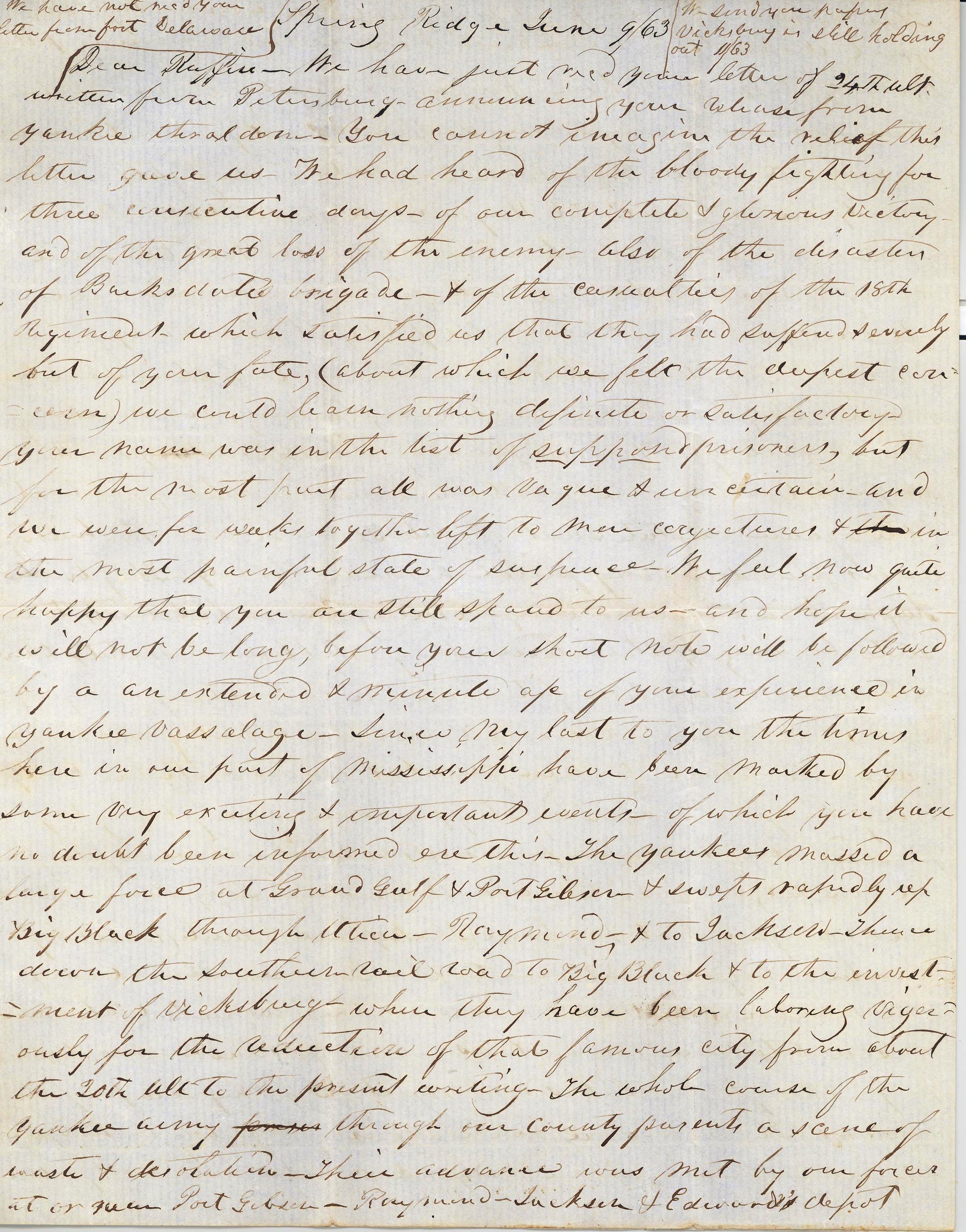 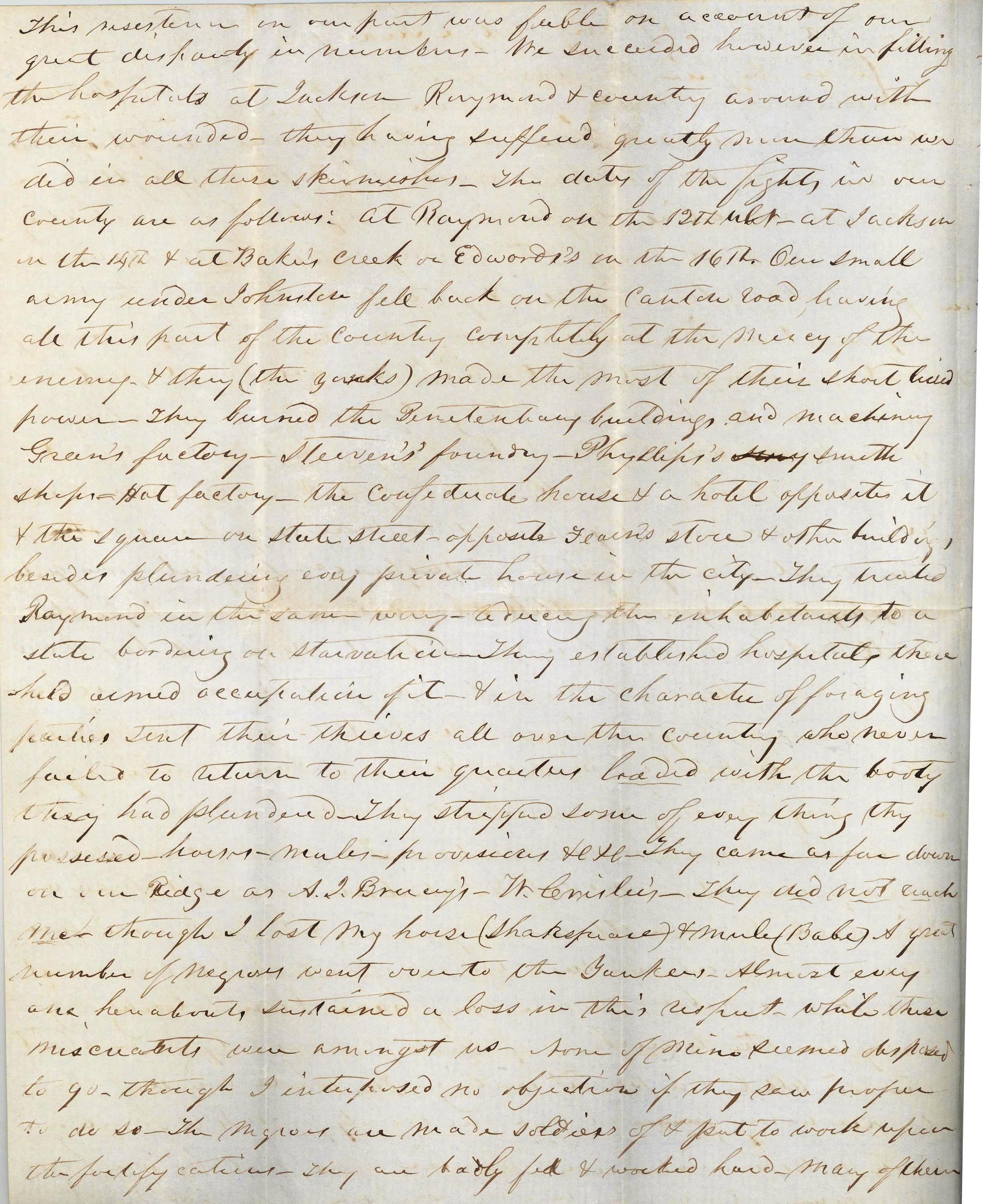 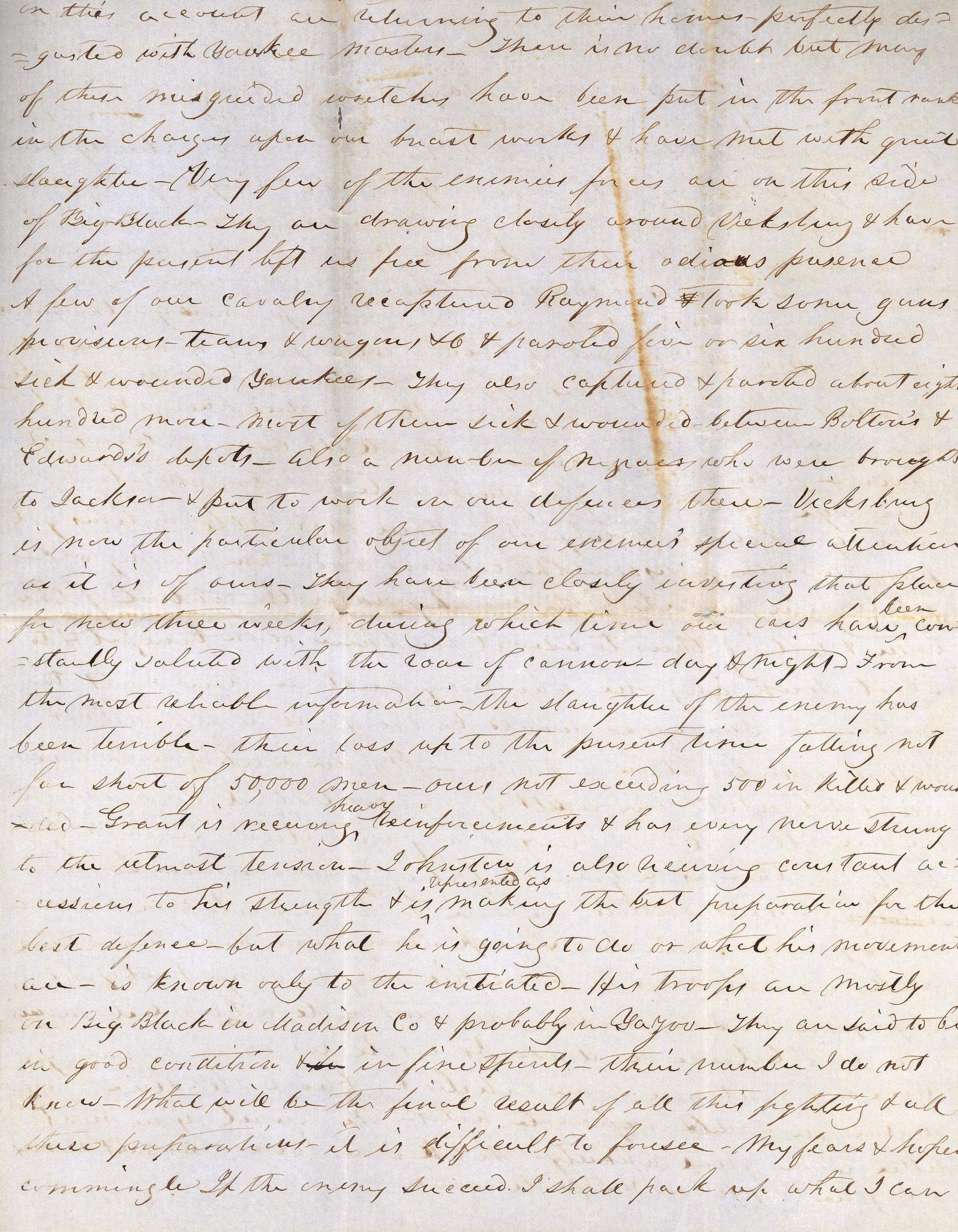 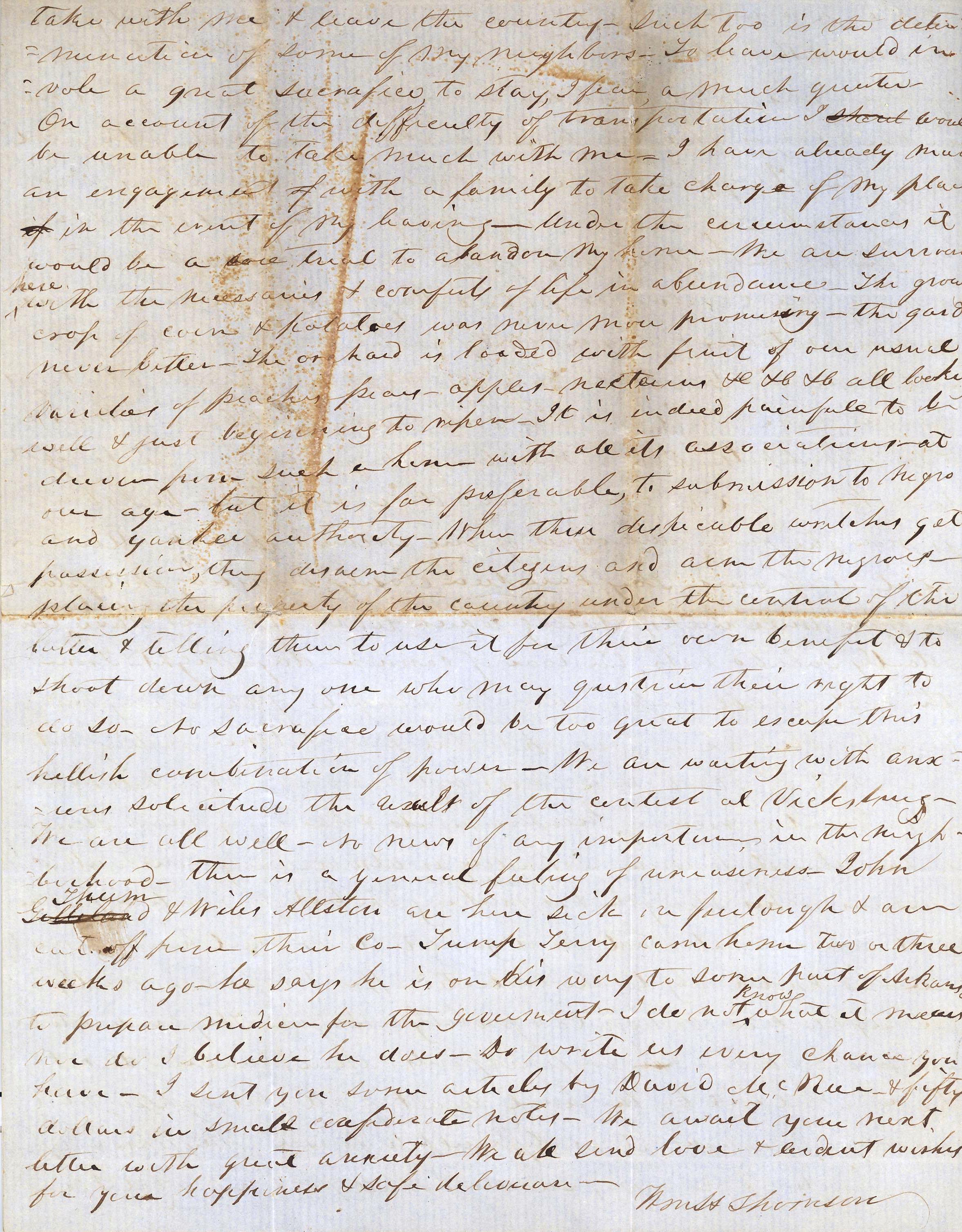 We have just received your letter of the 24th ult, written from Petersburg, announcing your release from Yankee thralldom. You cannot imagine the relief this letter gave us. We had heard of the bloody fighting for three consecutive days – of our complete and glorious victory, and of the great loss of the enemy; also of the disaster of Barksdale’s brigade, and of the casualties of the 18th regiment, which satisfied us that they had suffered severely; but of your fate (about which we felt the deepest concern) we could learn nothing definite or satisfactory. Your name was in the list of supposed prisoners, but for the most part all was vague and uncertain, and we were for weeks together left to mere conjecture, and in the most painful state of suspense. We feel now quite happy that you are still spared to us, and hope it will not be long before your short note will be followed by an extended and minute account of your experience in Yankee vassalage.

Since my last to you the times here in our part of Mississippi have been marked by some very exciting and important events, of which you have no doubt been informed ere this. The Yankees massed a large force at Grand Gulf and Port Gibson, and swept rapidly up Big Black through Utica, Raymond, and to Jackson. Thence down the Southern Railroad to Big Black, and to the investment of Vicksburg, where they have been laboring vigorously for the reduction of that famous city from about the 20th ult. to the present writing. The whole course of the Yankee army through our country presents a scene of waste and desolation. Their advance was met by our forces at or near Port Gibson, Raymond, Jackson and Edwards Depot. This resistance on our part was feeble on account of our great disparity in numbers. We succeeded, however, in filling the hospitals at Jackson, Raymond, and the country around with their wounded, they having suffered greatly more than we did in their skirmishes. The dates of the fights in our county are as follows: at Raymond on the 12th Ult.; at Jackson on the 14th, and at Barker’s Creek or Edwards on the 16th. Our small army under Johnston fell back on the Canton road, leaving all this part of the country completely at the mercy of the enemy; and they (the Yanks) made the most of their short-lived power. They burned the penitentiary buildings and machinery, Green’s factory, Steven’s foundry, Phillips’ smith shop, hat factory, the Confederate House and a hotel opposite it, and the square on State street opposite Green’s store, and other buildings; besides plundering every private house in the city. They treated Raymond in the same way, reducing the inhabitants to a state bordering on starvation. They established hospitals there, held armed occupation of it; and in the character of foraging parties send their  thieves all over the country, who never failed to return to their quarters loaded with booty they had plundered. They had stripped some of everything they possessed, horses, mules, provisions, etc. They came as far down on our Ridge as A.T. Bracey’s, W. Crisler’s. They did not reach me, though I lost my horse (Shakespeare) and mule (Babe). A great number of negroes went over to the Yankees. Almost everyone hereabout sustained a loss in this respect, while these miscreants interposed no objection if they saw proper to do so. The negroes are made soldiers of, and put to work upon the fortifications. They are badly fed and worked hard. Many of them on this account are returning to their homes, perfectly disgusted with Yankee masters. There is no doubt but that many of these misguided wretches have been put in the front ranks in the charges upon our breastworks, and have met with great slaughter. Very few of the enemy forces are on this side of Big Black. They are drawing closely around Vicksburg, and have for the present left us free from their odious presence. A few of our cavalry recaptured Raymond, and took some guns, provisions, teams and wagons, etc., and paroled five or six hundred sick and wounded Yankees. They also captured and paroled about eight hundred more – most of them sick and wounded – between Bolton’s and Edwards depots, also a number of negroes who were brought to Jackson and put to work on our defences there.

Vicksburg is not the particular object of our enemies’ special attention, as it is of ours. They have been closely investing that place now for three weeks, during which time our ears have been constantly saluted with the roar of cannon – day and night – From the most reliable information the slaughter of the enemy has been terrible, their loss up to the present time falling not far short of 50,000 men – ours not exceeding 500 in killed and wounded. Grant is receiving heavy reinforcements, and has every nerve strung to the utmost tension. Johnston is also receiving constant accessions to his strength, and is represented as making the best preparation for the best defense – but what he is going to do, or what his movements are – is known only to the initiated. His troops are mostly in Big Black, in Madison county, and probably in Yazoo. They are said to be in  good condition and in fine spirits – their number I do not know. What will be the final result of all this fighting and all theses preparations, it is difficult to foresee. My fears and hopes commingle. If the enemy succeed I shall pack up what I can take with me and leave the country. Such, too, is the determination of some of my neighbors. To leave would involve a great sacrifice; to say, I fear, a much greater. On account of the difficulty of transportation I would be unable to take much with me. I have already made an engagement with a family to take charge of my place in the event of my leaving. Under the circumstances it would be a sore trial to abandon my home. We are surrounded here with the necessaries and comforts of life in abundance. The growing crop of corn and potatoes was never more promising – the garden never better. The orchard is loaded with fruit of our usual varieties of peaches, pears, apples, nectarines, etc., all looking well, and just beginning to ripen. It is indeed painful to be driven from such a home, with all its associations, at our age; but it is far preferable to submission to negro and Yankee authority. When these despicable wretches get possession they disarm the citizens and arm the negroes, placing the property of the country under the control of the latter and telling them to use it for their own benefit and to shoot down anyone who may question their right to do so. No sacrifice would be too great to escape this hellish combination of power. We are waiting with anxious solicitude the result of the contest at Vicksburg.

We are all well. No news of any importance in the neighborhood. There is a general feeling of uneasiness. John Thum and Wiiley Allston are here sick on furlough, and are cut off from their company. Tump Terry came home two or three weeks ago – he says he is on his way to some part of Arkansas to prepare medicine for the government. I do not know what it means, no do I believe he does. I sent you some articles by David McRea, and fifty dollars in small certificate notes. We await your next letter with great anxiety. We all send love and ardent wishes for your happiness and safe deliverance.

We have not received your letter from Fort Delaware.

We send you papers. Vicksburg is still holding out. June 11/63