13 August 1863: “…desertion is rife the men regard their money as worthless & the government is unable to remedy the evil.”

Item description: Letter, dated 13 August 1863, from Joseph Norwood to his brother in law, Walter Lenoir. The writer discusses wounded and missing friends, the sale of land, the inflation of money, and desertion among Confederate soldiers. 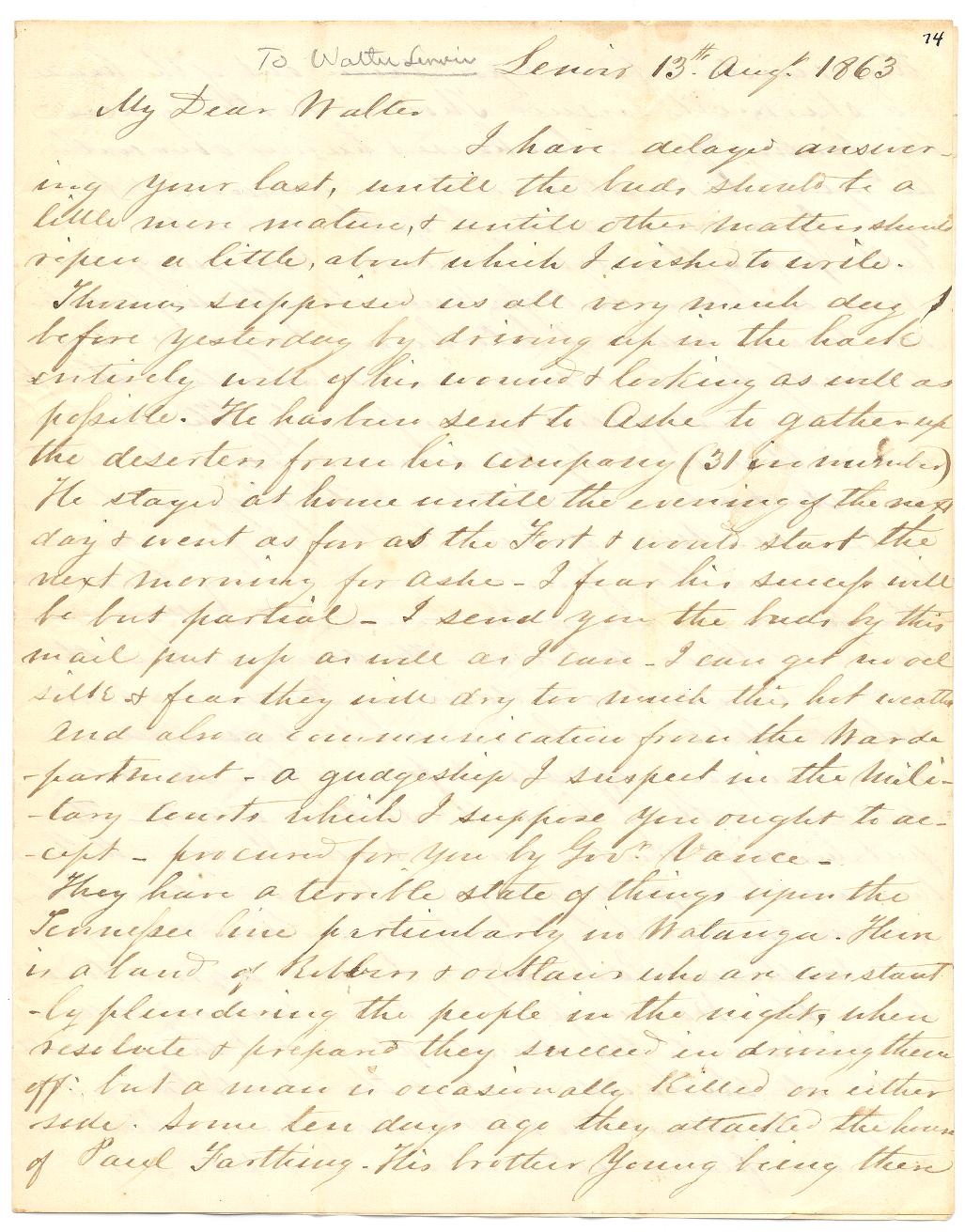 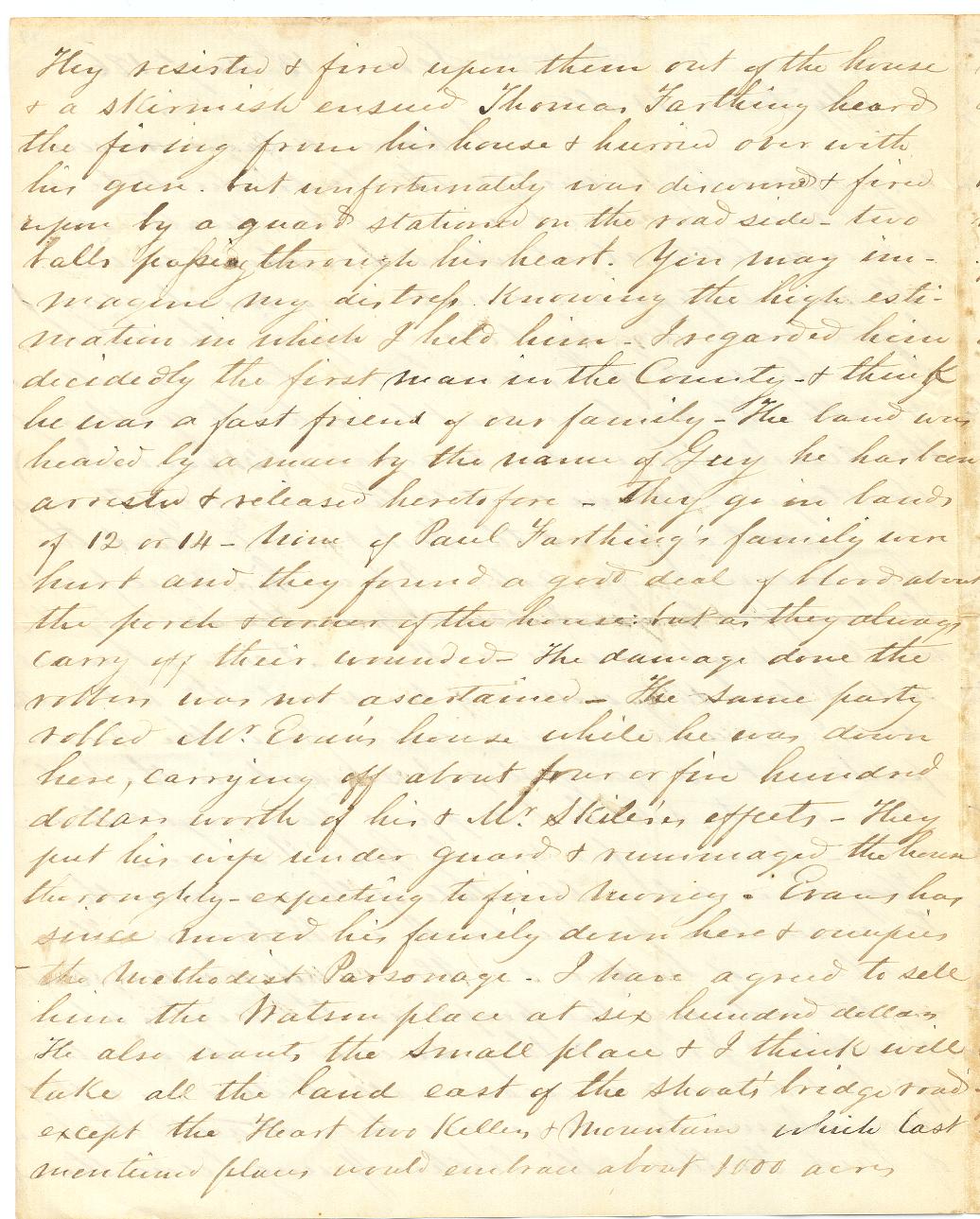 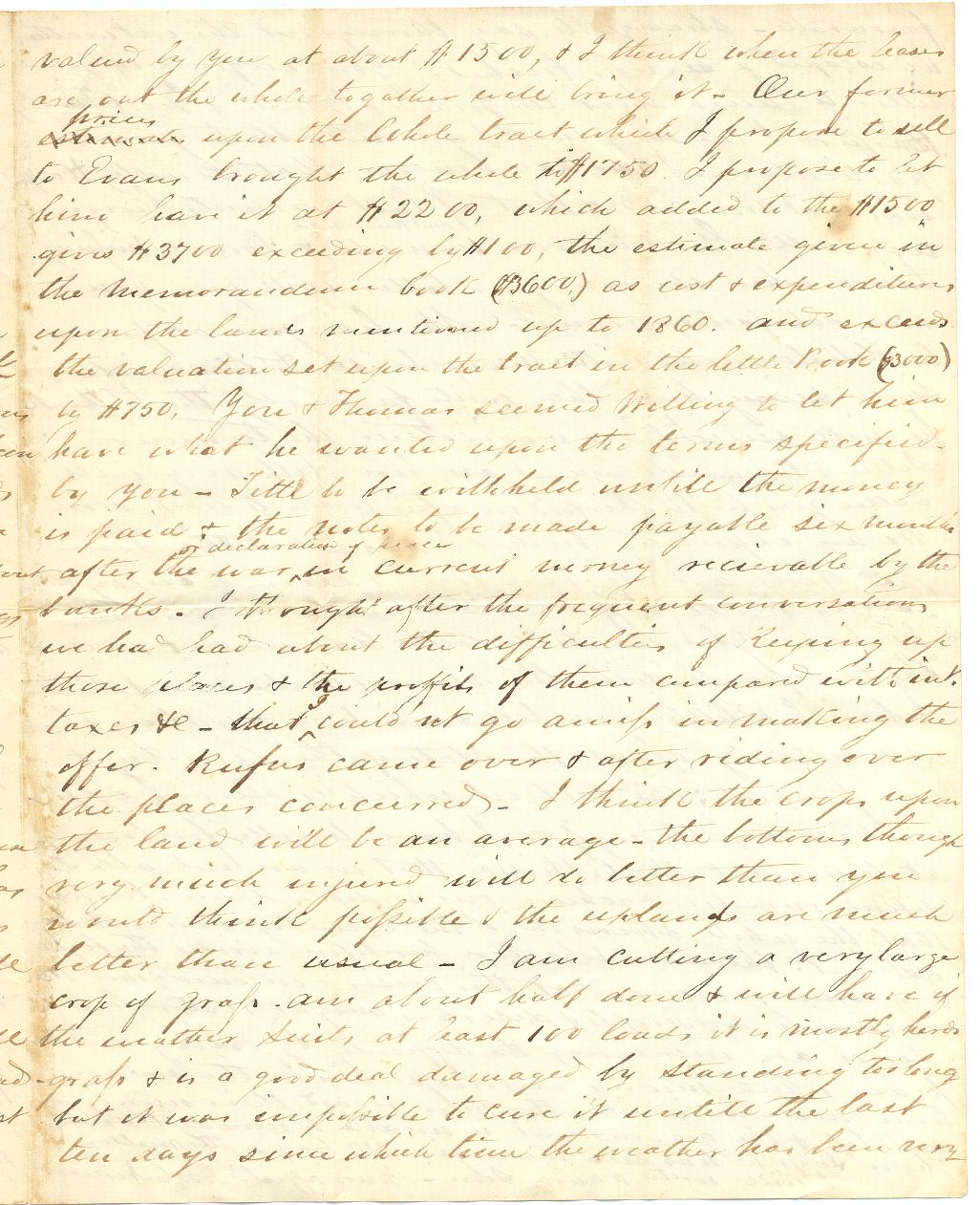 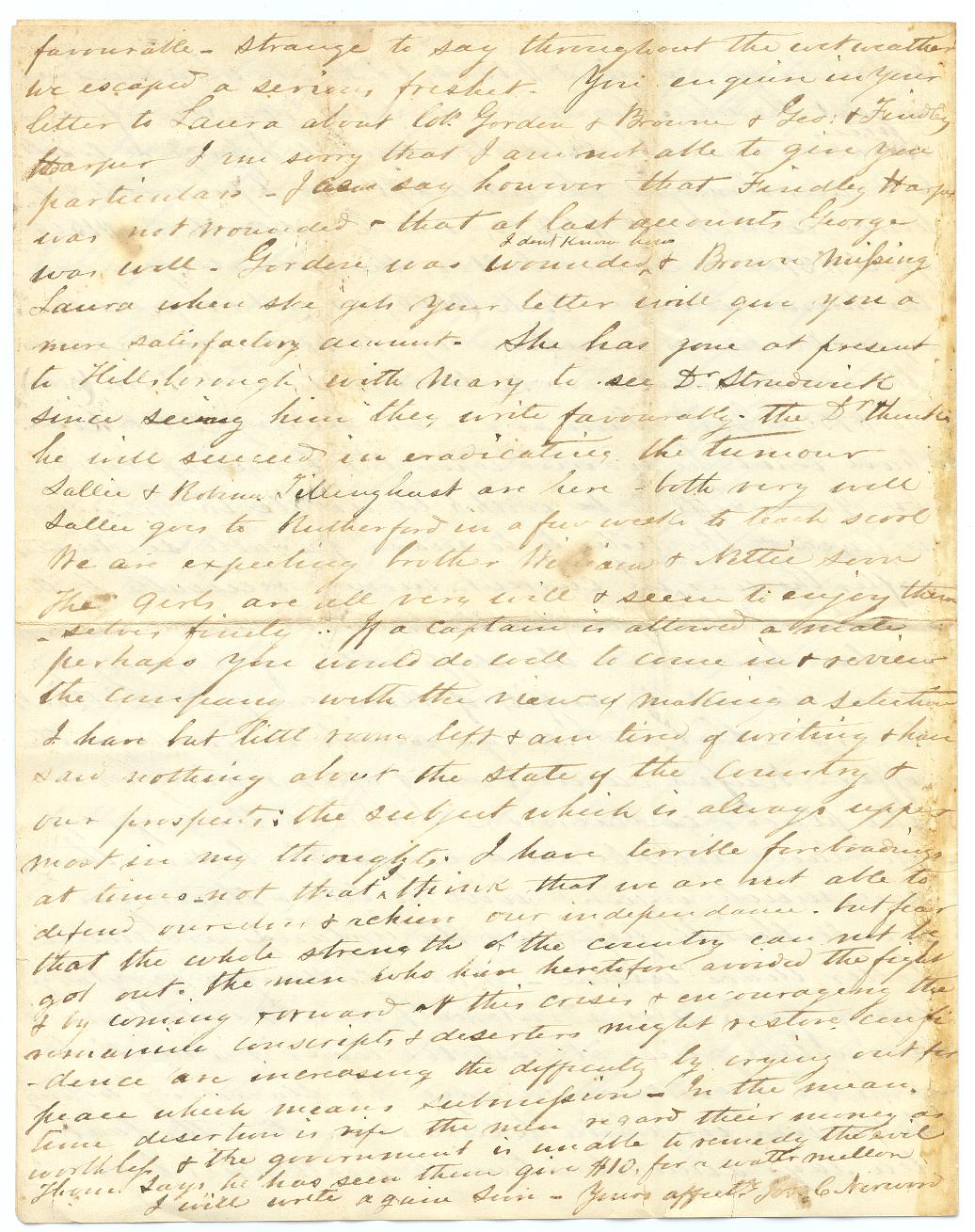 I have delayed answer-ing your last, until the buds should be a little more mature, & until other matters should ripen a little, about which I wished to write. Thomas supprised us all very much day before yesterday by driving up in the hack entirely well of his wound & looking as well as possible. He has been sent to Ashe to gather up the deserters from his company (31 in number). He stayed at home until the evening of the next day & went as far as the Fort & would start the next morning for Ashe. I fear his success will be but partial. I send you the buds by this mail put up as well as I can. I can get no oil silk & fear they will dry too much this hot weather and also a communication from the War de-partment – a judgeship I suspect in the mili-tary courts which I suppose you ought to ac-cept – procured for you by Gov. Vance.
They have a terrible state of things upon the Tennessee line particularly in Watauga. There is a land of robbers and outlaws who are constant-ly plundering the people in the nights when resolute & prepared they succeed in driving them off, but a man is occasionally killed on either side. Some ten days ago they attacked the [home?] of Paul Farthing. His brother Young being there. They resisted & fired upon them out of the house & a skirmish ensued. Thomas Farthing heard the firing from his house & hurried over with his gun,but unfortunately was discovered & fired upon by a guard stationed on the roadside – two balls passed through his heart. You may im-magine my distress knowing the high esti-mation in which I held him. I regarded him decidedly the first man in the Country & think he was a fast friend of our family. The band was headed by a man by the name of Guy he has been arrested & released heretofore. They go in bands of 12 or 14 – him of Paul Farthing’s family were hurt and they found a good deal of blood about the porch & corner of the house., but as they always carry of their wounded the damage done the [?] was not ascertained. The same party rolled Mr. Evan’s house while he was down here, carrying off about four or five hundred dollars worth of his & Mr. [Skiler’s ?] effects. They put his wife under guard & rummaged the house thoroughly, expecting to find money. Evans has since moved his family down here & occupies the Methodist Parsonage. I have agreed to sell him the [Watson?] place at six hundred dollars. He also wants the small place & I think will take all the land east of the Shoat’s bridge road except the [Heart two Keller & Mountain?] which last mentioned places embrace about 1000 acres valued by you at about $1500, & I think where the leases are out the whole together will bring it. Our former prices upon the whole tract which I propose to sell to Evan brought the whole to $1750. I propose to let him have it at $2200, which added to the $1500 gives $3700 exceeding by $100 the estimates given in the memorandum book ($3600) as cost & expenditures upon the lands mentioned up to 1860 and exceeds the valuation set upon the tract in the little Book ($3000) in $750. You & Thomas seemed willing to let him have what he would upon the terms specified to you. Title to be withheld until the money is paid & the notes to be made payable six months after the war or declaration of peace in current money receivable by the banks. I thought after the recent conversation we had had about the difficulties of keeping up those [taxes?] & the profits of them compared without taxes etc. that I could not go amiss in making the offer. Rufus came over & after riding over the places concurred. I think the crop upon the land will be an average. The bottoms though very much injured will do better than you would think possible. The uplands are much better than usual. I am cutting a very large crop of grass & is a good deal damaged by standing too long but it was impossible to cure it until the last ten days since which time the weather has been very favourable. Strange to say throughout the wet weather we escaped a serious [?]. You enquire in your letter to Laura about Col.Gordan & Brown & Geo. & Findley Harper. I am sorry that I am not able to give you particulars – I can say however that Findley Harper was not wounded & that at last accounts George was well. Gordon was wounded I don’t know how & Brown missing. Laura when she gets your letter will give you a more satisfactory account. She has gone at present to Hillsborough with Mary to see Dr. [Stridwick?] since seeing him they write favorably. The Dr. thinks he will succeed in eradicating the tumour. Sallie & Rebecca [Tellinghast?] are here – both very well. Sallie goes to Rutherford in a few weeks to teach scool. We are expecting brother William & Nettie soon. The girls are all very well & seem to enjoy them-selves finally. If a Captain is allowed a mate, perhaps you would do well to come in & review the company with the view of making a selection. I have but little room left & am tired of writing & have said nothing about the state of the country & our prospects: the subject which is always upper most in my thoughts I have terrible forboadings at times not that I think that we are not able to defend ourselves & achieve our independence, but fear that the whole strength of the country can not be got out. The men who have heretofore arrived the fight & by coming forward that this crisis & encouraging the remaining conscripts & deserters might restore confi-dence are increasing the difficulty by crying out for peace which means submission. In the mean-time desertion is rife the men regard their money as worthless & the government is unable to remedy the evil. Thomas says he has seen them give $10 for a watermellon.

I will write again soon – Yours affect.ly Jos. C. Norwood