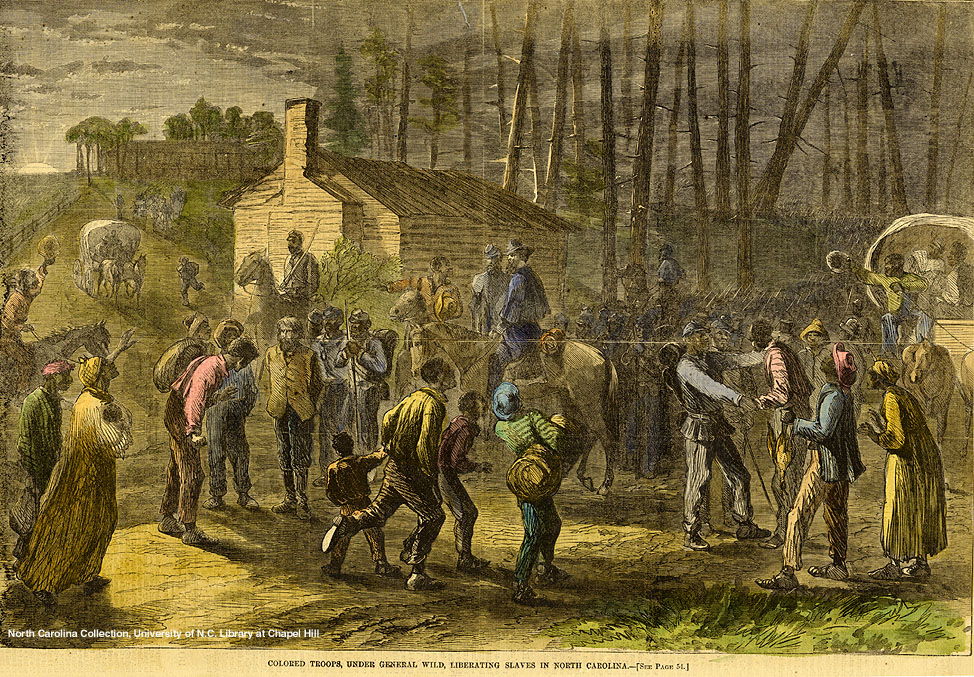 General Wild’s late raid into the interior of North Carolina abounded in incidents of peculiar
interest, from which we have selected a single one as the subject of the illustration on page 52, representing the liberation by the negro battalion of the slaves on Mr. Terrebee’s plantation. As the reader may imagine, the scene was both novel and original in all its features. General Wild having scoured the peninsula between Pasquotank and Little Rivers to Elizabeth City, proceeded from the latter place toward Indiantown in Camden County. Having encamped overnight, the column moved on into a rich country which was covered with wealthy plantations. The scene in our sketch represents the colored troops on one of these plantations freeing the slaves. The morning light is shining upon their bristling bayonets in the back-ground, and upon a scene in front as ludicrous as it is interesting. The personal effects of the slaves are being gathered together from the outhouses on the plantation and piled, regardless of order, in an old cart, the party meanwhile availing themselves in a promiscuous manner of the Confiscation Act by plundering hens and chickens and larger fowl; and after all of these preliminary arrangements the women and children are (in a double sense) placed on an eminence above their chattels and carted off in triumph, leaving “Ole Massa” to glory in solitude and secession.