16 February 1864: “The Sheriff of the County summoned a ‘Posse’ of about thirty of us to break up a camp of run away Negroes, which we most effectually did…”

Posted on 16 Feb ’14 by Biff Hollingsworth

Item description: Letter from Henry A. London to Lilla London, 16 February 1864. London reports to his sister news of the family. He helped break up a camp of runaway negroes, and students who were avoiding military service were taken to Raleigh, NC, by conscription agents. 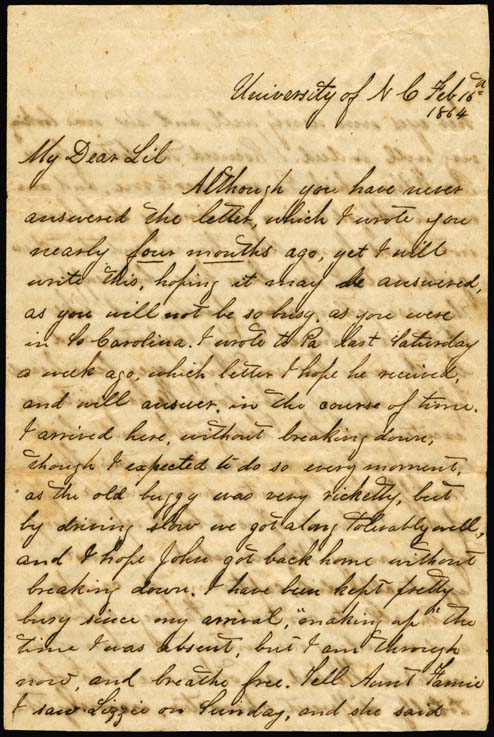 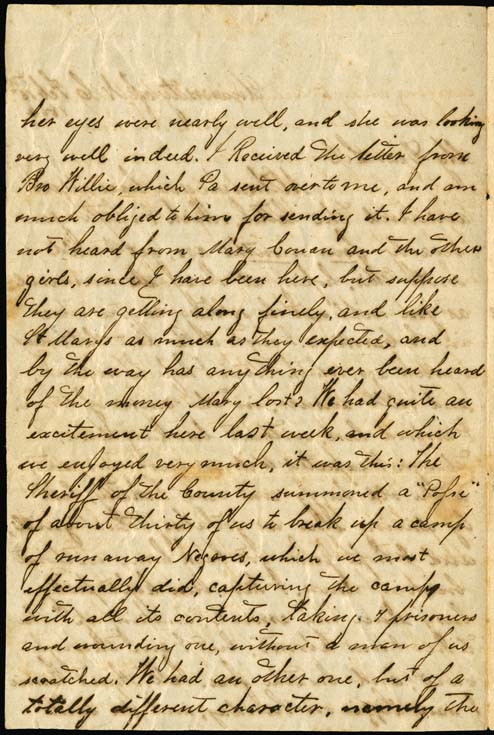 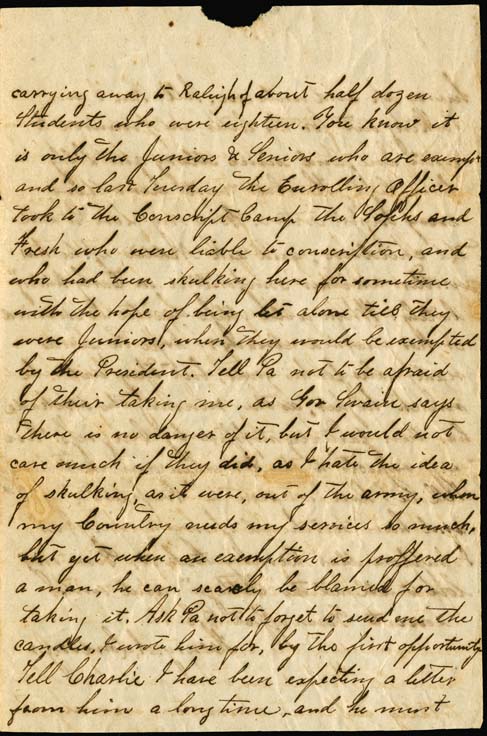 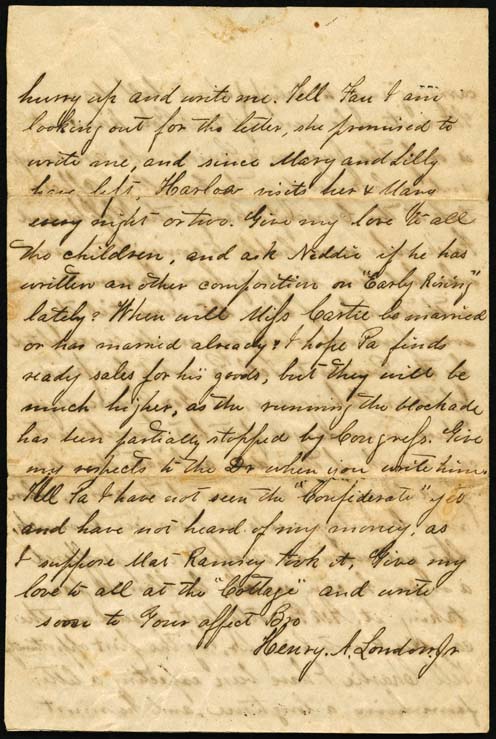 Although you have never answered the letter, which I wrote you nearly four months ago, yet I will write this, hoping it may be answered, as you will not be so busy as you were in So Carolina. I wrote to Pa last Saturday a week ago, which letter I hope he received, and will answer, in the course of time. I arrived here, without breaking down, though I expected to do so every moment, as the old buggy was very ricketty, but by driving slow we got along tolerably well, and I hope John  got back home without breaking down. I have been kept pretty busy since my arrival, “making up” the time I was absent, but I am through now, and breathe free. Tell Aunt Fannie I saw Lizzie on Sunday, and she said her eyes were nearly well, and she was looking very well indeed. I Received the letter from Bro Willie, which Pa sent over to me, and am much obliged to him for sending it. I have not heard from Mary Cowan and the other girls, since I have been here, but suppose they are getting along finely, and like St Marys as much as they expected, and by the way has anything ever been heard of the money Mary lost? We had quite an excitement here last week, and which we enjoyed very much, it was this: The Sheriff of the County summoned a “Posse” of about thirty of us to break up a camp of run away Negroes, which we most effectually did, capturing the camp with all its contents, taking 7 prisoners and wounding one, without a man of us scratched. We had an other one, but of a totally different character, namely the carrying away to Raleigh of about half dozen Students who were eighteen. You know it is only the Juniors & Seniors who are exempt and so last Tuesday the Enrolling Officer took to the Conscript Camp the Sophs and Fresh who were liable to conscription, and who had been skulking here for sometime with the hope of being let alone till they were Juniors, when they would be exempted by the President. Tell Pa not to be afraid of their taking me, as Gov Swain says there is no danger of it, but I would not care much if they did, as I hate the idea of skulking, as it were, out of the army, when my Country needs my services so much, but yet when an exemption is proffered a man, he can scarcely be blamed for taking it. Ask Pa not to forget to send me the candles, I wrote him for, by the first opportunity. Tell Charlie I have been expecting a letter from him a long time, and he must hurry up and write me. Tell Fan I am looking out for the letter, she promised to write me, and since Mary and Lilly have left, Harlo[w] visits her & Mary every night or two. Give my love to all the children, and ask Neddie if he has written an other composition on “Early Rising” lately? When will Miss Cartie be married or has married already? I hope Pa finds ready sales for his goods, but they will be much higher, as the running the blockade has been partially stopped by Congress. Give my respects to the Dr when you write him. Tell Pa I have not seen the “Confederate” yet and have not heard of my money, as I suppose Mat Ramsey took it, Give my love to all at the “Cottage” and write soon to Your affect Bro

More about this item: London’s diary indicates that he sent letters to “Miss Lilla London,” the only correspondent listed who might be addressed as “My Dear Lil.” She was Henry’s sister. The St. Mary’s College mentioned in in this letter refers to the Episcopal school for women in Raleigh, NC, founded in 1842.