Posted on 9 Mar ’14 by Biff Hollingsworth 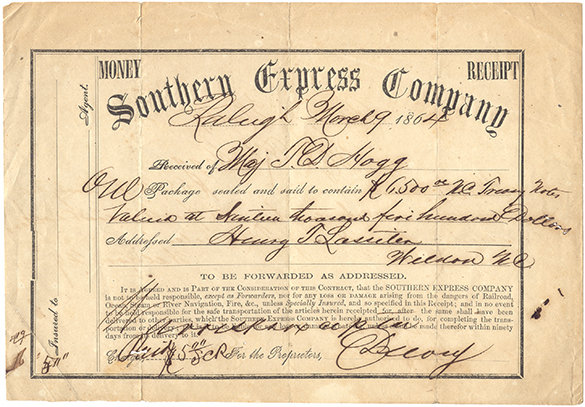 Item: March 9, 1864 Southern Express Company receipt.  Clicking on image above leads to its record in “Historic Moneys in the North Carolina Collection.”

Historical Note: This receipt records the shipment by Southern Express Company of $6,500* in North Carolina treasury notes from Raleigh to Weldon, N.C., in March 1864.  It is likely that the currency was sent to help purchase provisions or pay state troops stationed in Virginia.  The town of Weldon, as a rail junction, served as a vital supply link to General Robert E. Lee’s army in Virginia.  Also, the dispatcher of the funds identified on this receipt was Major Thomas Devereaux Hogg (1823-1904), the chief commissary of North Carolina’s “Subsistence Department” from September 1861 until the Confederacy’s collapse in 1865.  In postwar accounts of his military service, Hogg stated that his department was responsible for “feeding about half of Lee’s army” during the final stages of the conflict. The presence of Charles Dewey’s signature in the bottom-right corner of this receipt suggests that these state funds were actually disbursed and authorized for shipment from the Bank of North Carolina’s central office, where Dewey worked as a cashier.

* Note that the handwritten amount in text is “Sixteen thousand five hundred Dollars” but in numerical form is “$6,500.00.”

TO BE FORWARDED AS ADDRESSED IT IS AGREED AND IS PART OF THE CONSIDERATION OF THIS CONTRACT, that the SOUTHERN EXPRESS COMPANY is not to be held responsible, except as forwarders, nor for any LOSS or DAMAGE arising from the dangers of Railroad, Ocean, Steam, or River Navigation, Fire, &c., unless Specially Insured , and so specific in this Receipt; and in no event to be held responsible for the safe transportation of the articles herein receipted for, after the same shall have been delivered to other parties, which the SOUTHERN EXPRESS COMPANY is hereby authorized to do, for completing the trans-portation or delivery; per is it to be liable for any loss or damage whatever, unless claim be made therefor within ninety days from its delivery to it.