6 May 1864: “Your mother writes me that John is noticed as conspicuous for gallantry in the action at Plymouth.”

Posted on 6 May ’14 by Biff Hollingsworth

Item description: Letter, dated 6 May 1864, from William Alexander Graham to his son, James Augustus Graham. In the letter, Graham discusses the failure of an attempt to transfer his son into General Cooke’s division, the death of his sister Mary, and troop movements in North Carolina. He also notes that James’ brother John praised for gallantry at the Battle of Plymouth. 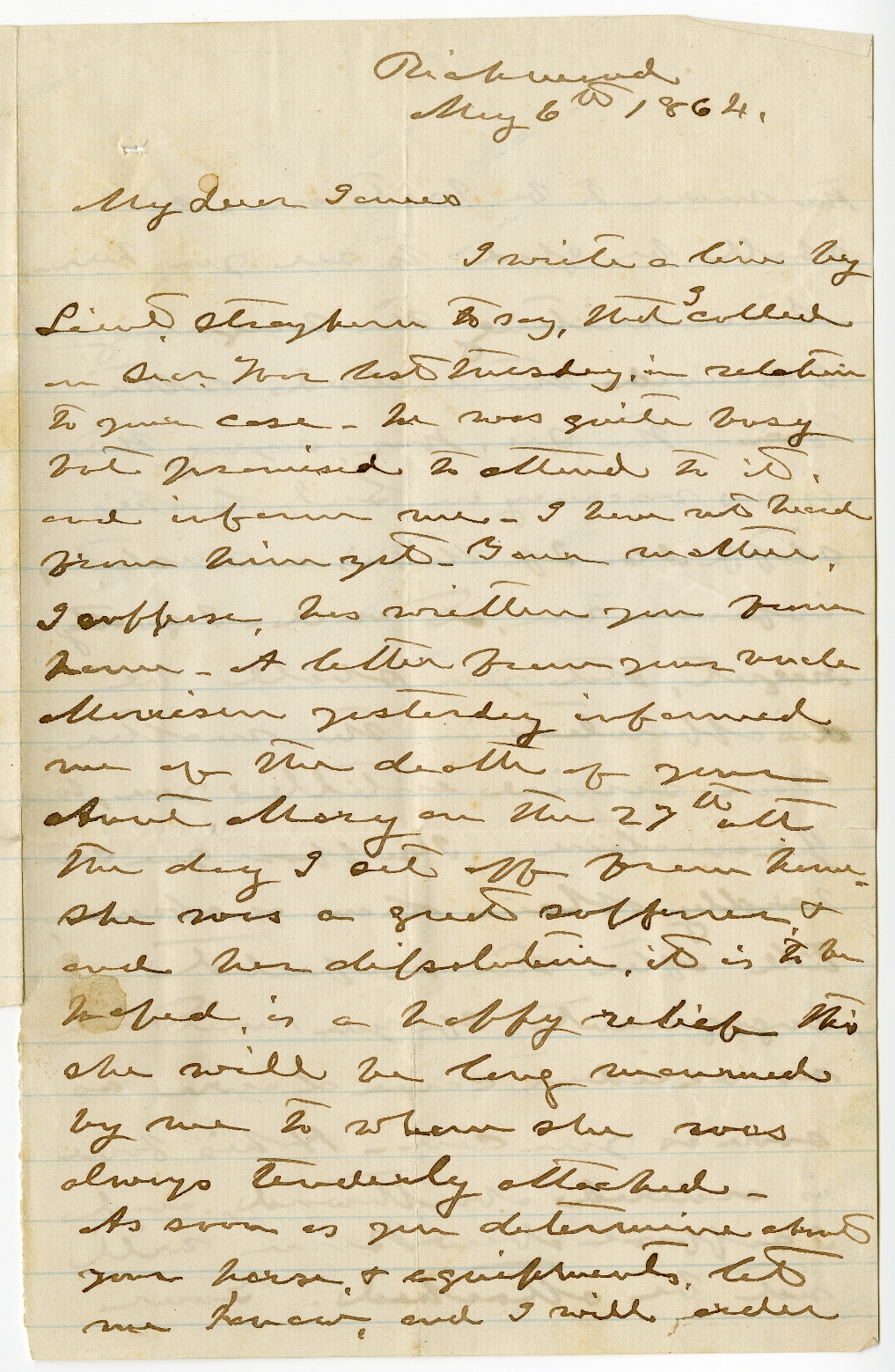 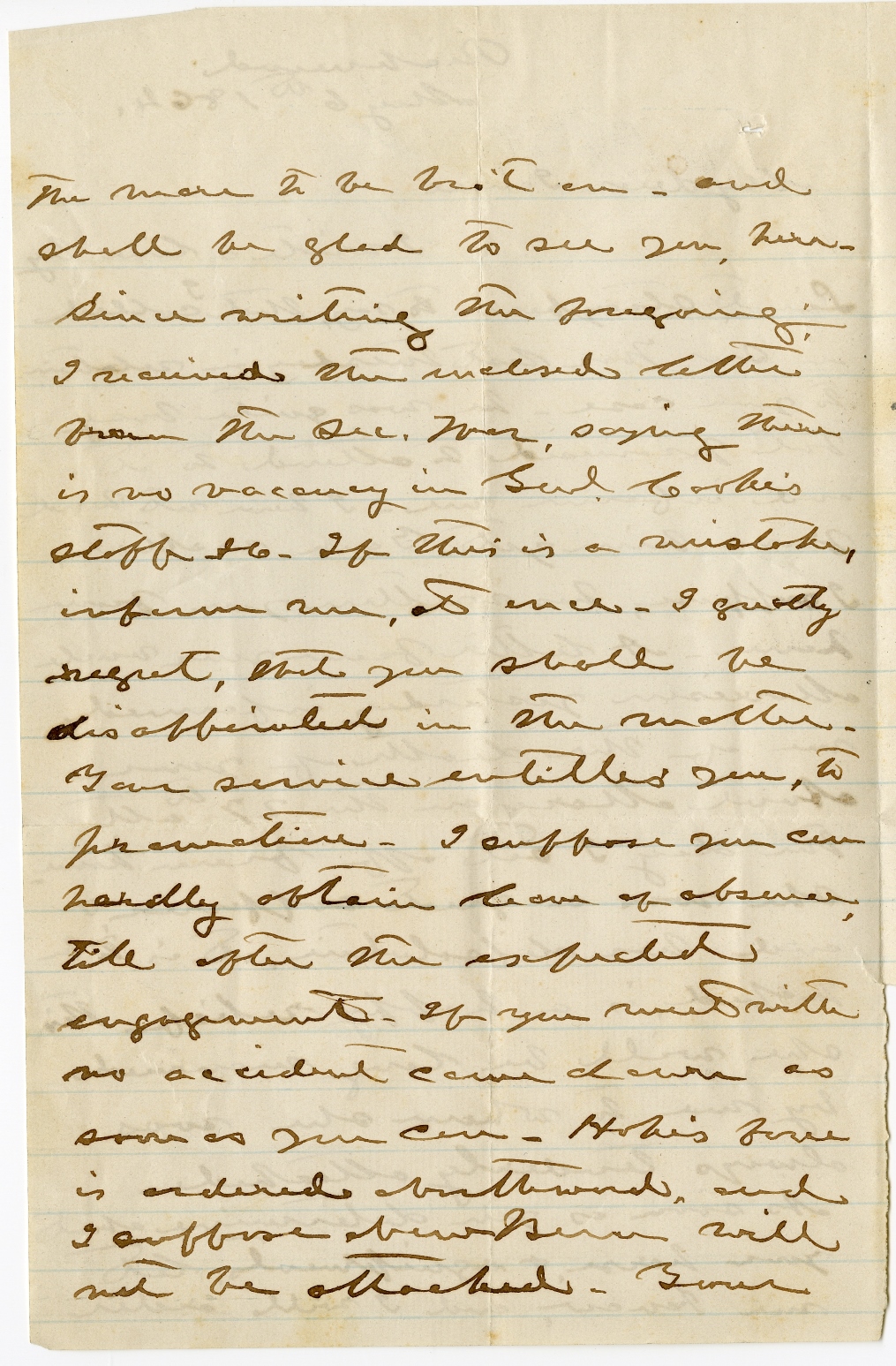 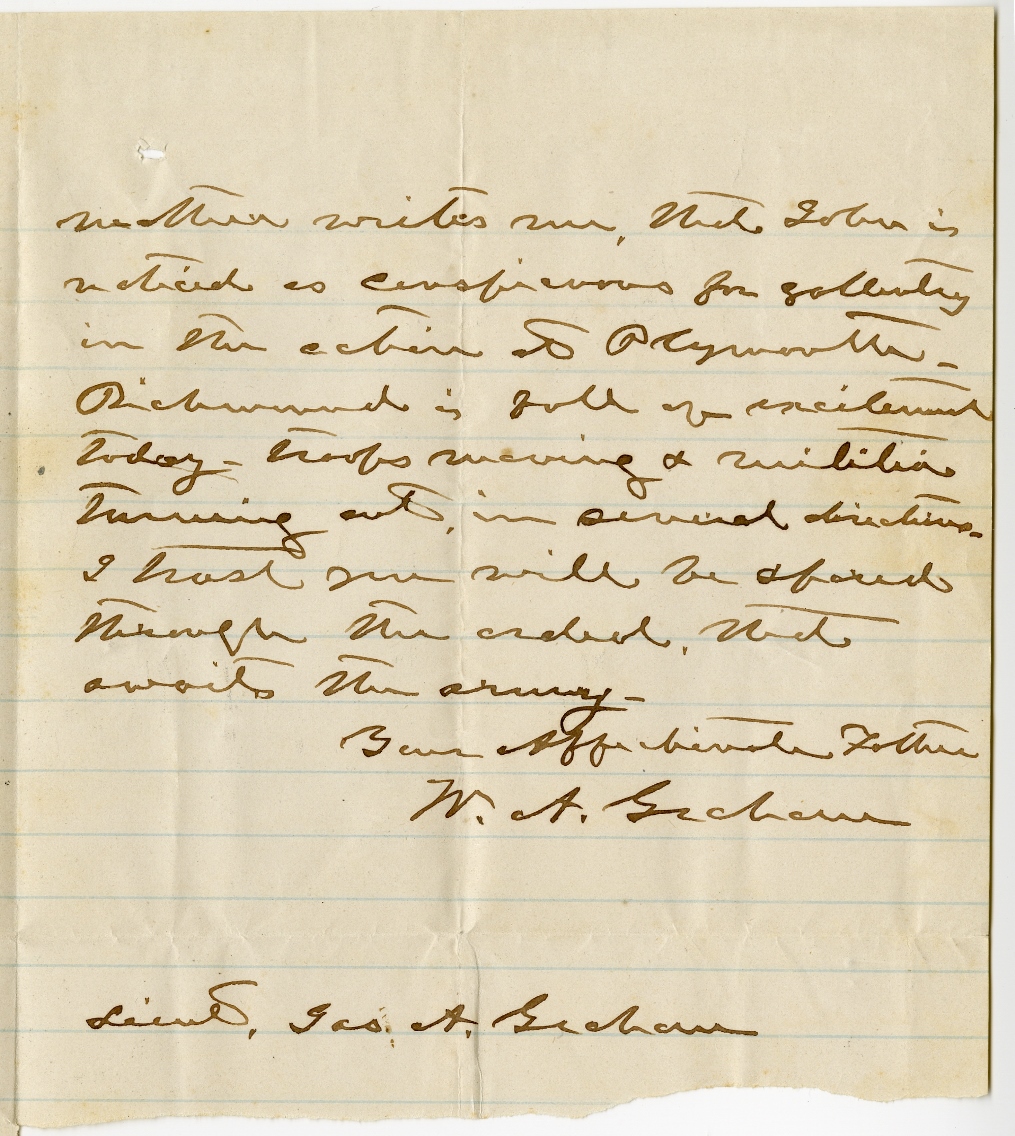 I write a line by Lieut. Strayhorn to say that I called on [Secr. War?] last Tuesday, in relation to your case. He was quite busy but promised to attend to it, and inform me. I have not heard from him yet. Your mother, I suppose, has written you from home.  A letter from  your Uncle Morrison yesterday informed us of the death of your Aunt Mary on the 27th ult. The day I set off from home. She was a great sufferer, & and her dissolution, it is to be hoped, is a happy relief.  [This?] she will be long mourned by me to whom she was always tenderly attached. As soon as you determine about your horse, & equipments, let me know, and I will order the mare to be [?] and shall be glad to see you, here. Since writing the foregoing I received the enclosed letter from the Sec. War, saying there is no vacancy in Genl Cooke’s staff &c. If this is a mistake, inform me at once. I greatly regret that you shall be disappointed in the matter. Your service entitled you, to [?].  I suppose you can hardly obtain leave of absence, till after the expected engagement.  If you meet with no accident come down as soon as you can. Hoke’s force is ordered Northward, and I suppose New Bern will not be attacked. Your mother writes me that  John is noticed as conspicuous for gallantry in the action at Plymouth. Richmond is full of excitement, troops moving and militia training out in several directions. I trust you will be spared through the ordeal that awaits the army.

More about this item: A the time this letter was written, William Alexander Graham was serving in the Confederate Senate. Graham was formerly a U.S. Senator, Governor of the state of North Carolina, and a vice presidential candidate for the Whig party.