Item Description: Cornelius Dabney, a student at the University of Virginia, describes the effects of the Civil War on his family in his diary. At the time when this is written he was not at school. 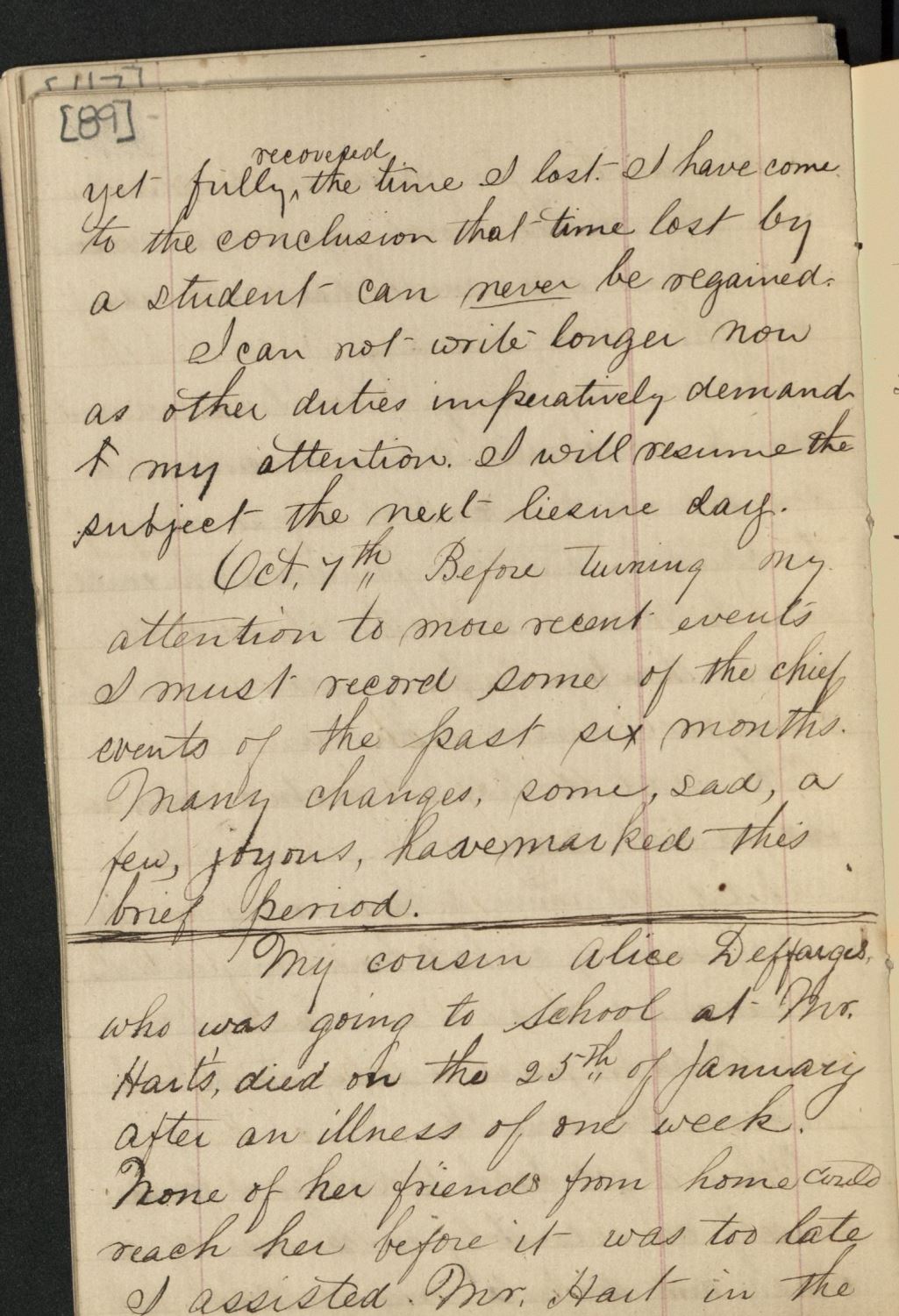 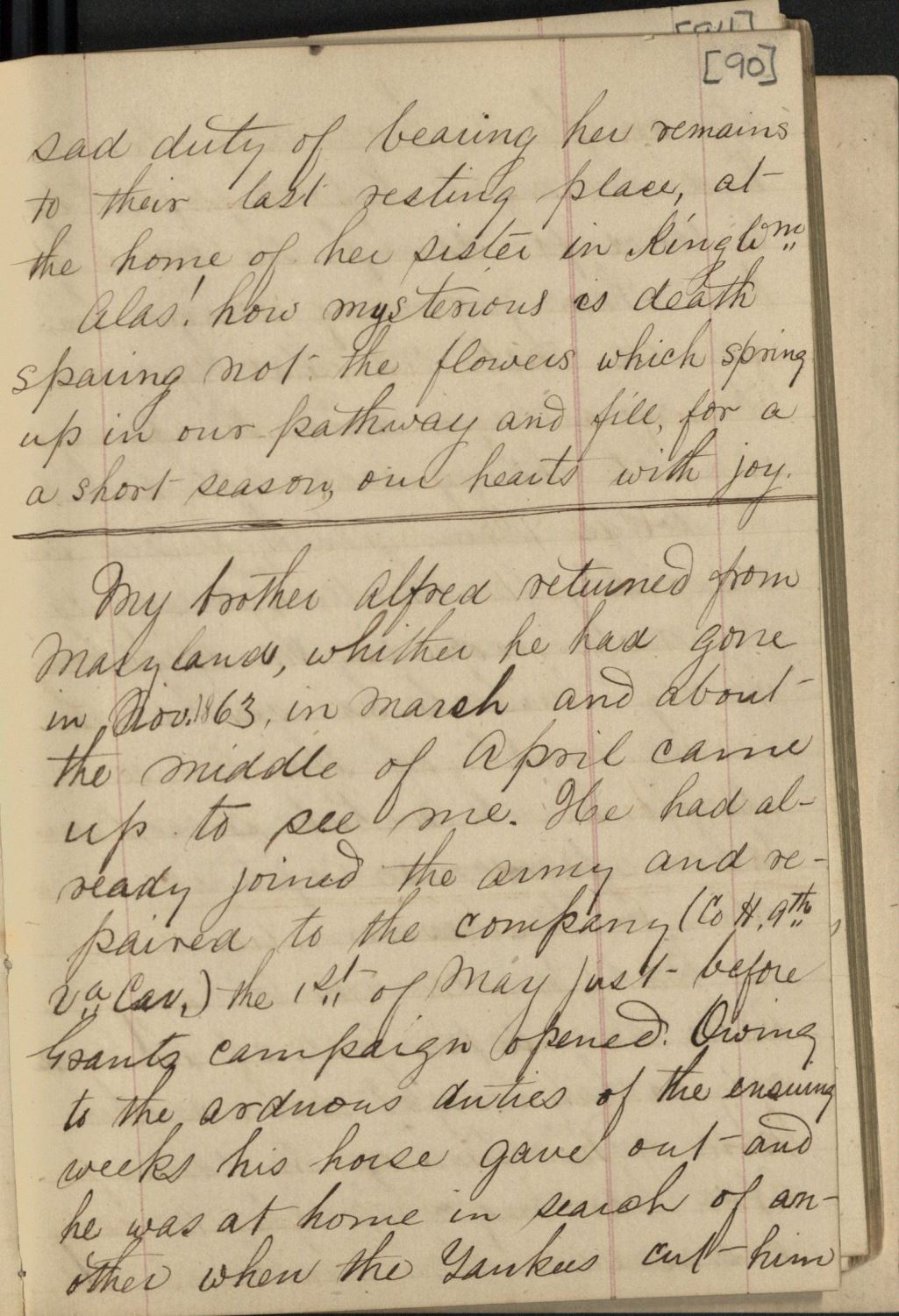 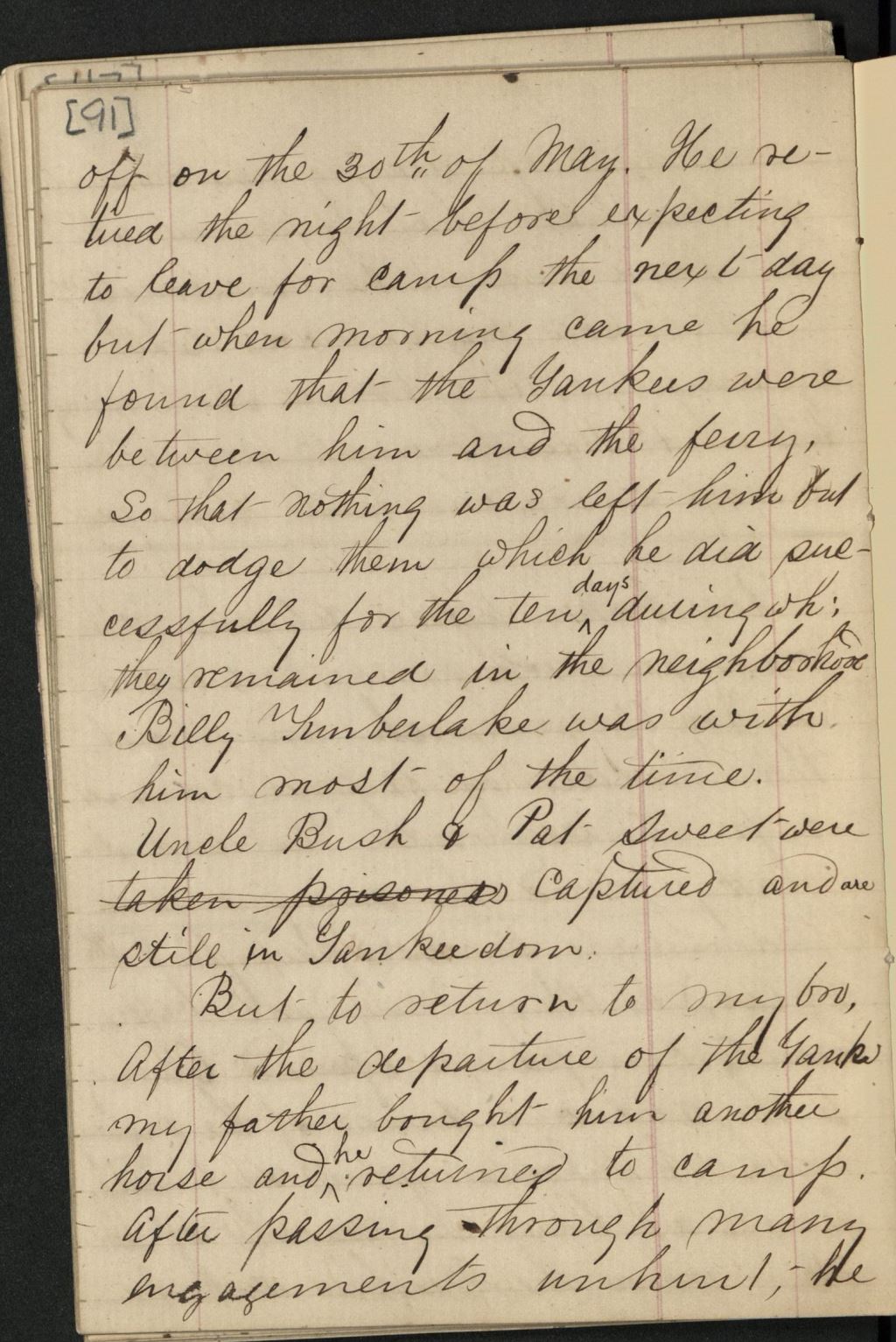 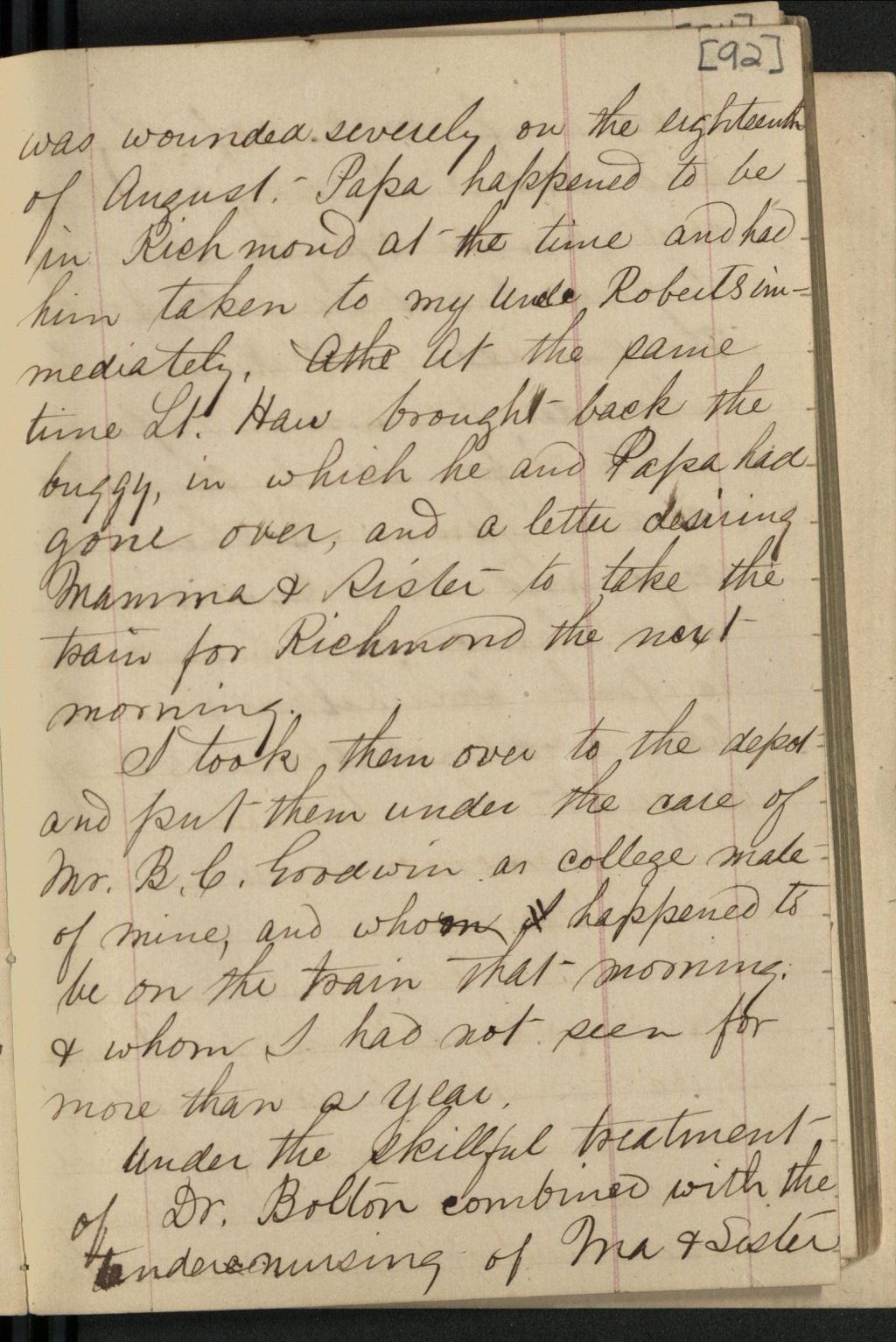 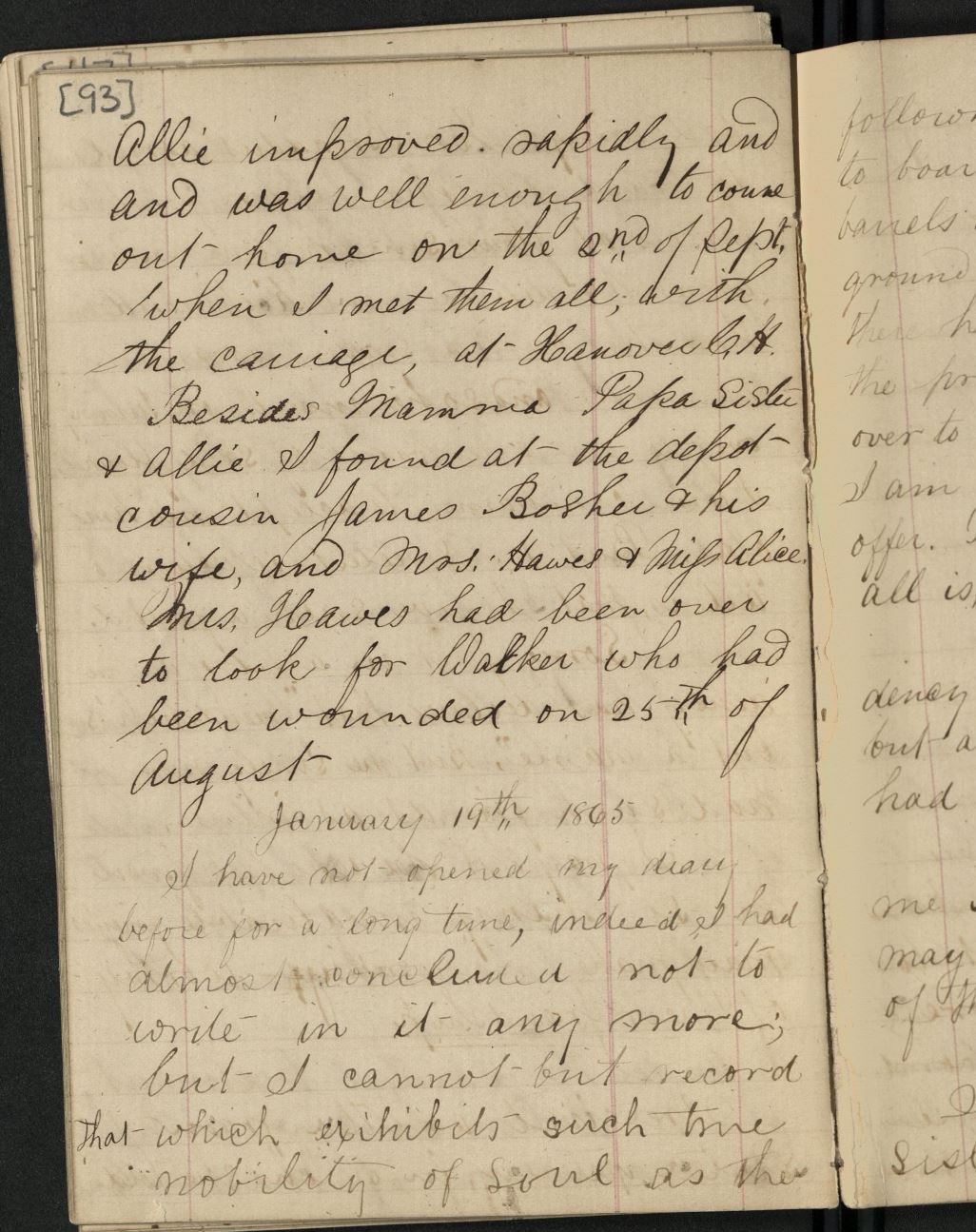 Oct. 7th. Before turning my attention to more recent events I must record some of the chief events of the past six months. Many changes, some, sad, a few joyous have marked this brief period.

My cousin Alice Deffarges, who was going to School at Mr. Hart’s died on the 25th of January after an illness of one week. None of her friends from home could reach her before it was too late I assisted Mr. Hart in the sad duty of bearing her remains to their last resting place, at the home of her sister in King Wm.

Alas! how mysterious is death sparing not the flowers which spring up in our pathway and fill, for a short season, our hearts with joy.

My brother Alfred returned from Maryland, whither he had gone in Nov. 1863, in March and about the middle of April came up to see me. He had already joined the army and repaired to the company (Co H, 9th. Va. Cav.) the 1st of May just before Grant’s campaign opened. Owing to the arduous duties of the ensuing weeks his horse gave out and he was at home in search of another when the Yankees cut him off on the 30th of May. He returned the night before expecting to leave for camp the next day but when morning came he found that the Yankees were between him and the ferry. So that nothing was left him but to dodge them which he did successfully for the ten days during wh; they remained in the neighborhood Billy Timeberlake was with him most of the time. Uncle Bush & Pat Sweet were captured and are still in Yankeedom.

But to return to my bro. After the departure of the Yanks my father bought him another horse and he returned to camp. After passing through many engagements unhurt, he was wounded severely on the eighteenth of August. Papa happened to be in Richmond at the time and had him taken to my uncle Roberts immediately. At the same time Lt. Haw brought back the buggy, in which he and Papa had gone over, and a letter desiring Mamma & Sister to take the train for Richmond the next morning.

I took them over to the depot and put them under the care of Mr. B.C. Goodwin a college mate of mine, and who happened to be on the train that morning & whom I had not seen for more than a year.

Under the skillful treatment of Dr. Bolton combined with the tender nursing of Ma & Sister Allie improved rapidly and was well enough to course out home on the end of Sept. When I met them all, with the carriage, at Hanover C. H. Besides Mama, Papa, Sister, & Allie I found at the depot cousin James Bosher & his wife, and Mrs. Hawes & Miss Alice. Mrs. Hawes had been over to look for Walker who had been wounded on 25th of August.