Posted on 28 Oct ’14 by Rebecca Williams

Item Description: Letter dated 28 October 1864 written by John Francis Shaffner. He gives extensive description of his love for Carrie Fries, who he became engaged to in September 1863. Shaffner also mourns the loss of a close friend in battle. He also provides a description of the evacuation of an infirmary after the Battle of Cedar Creek. 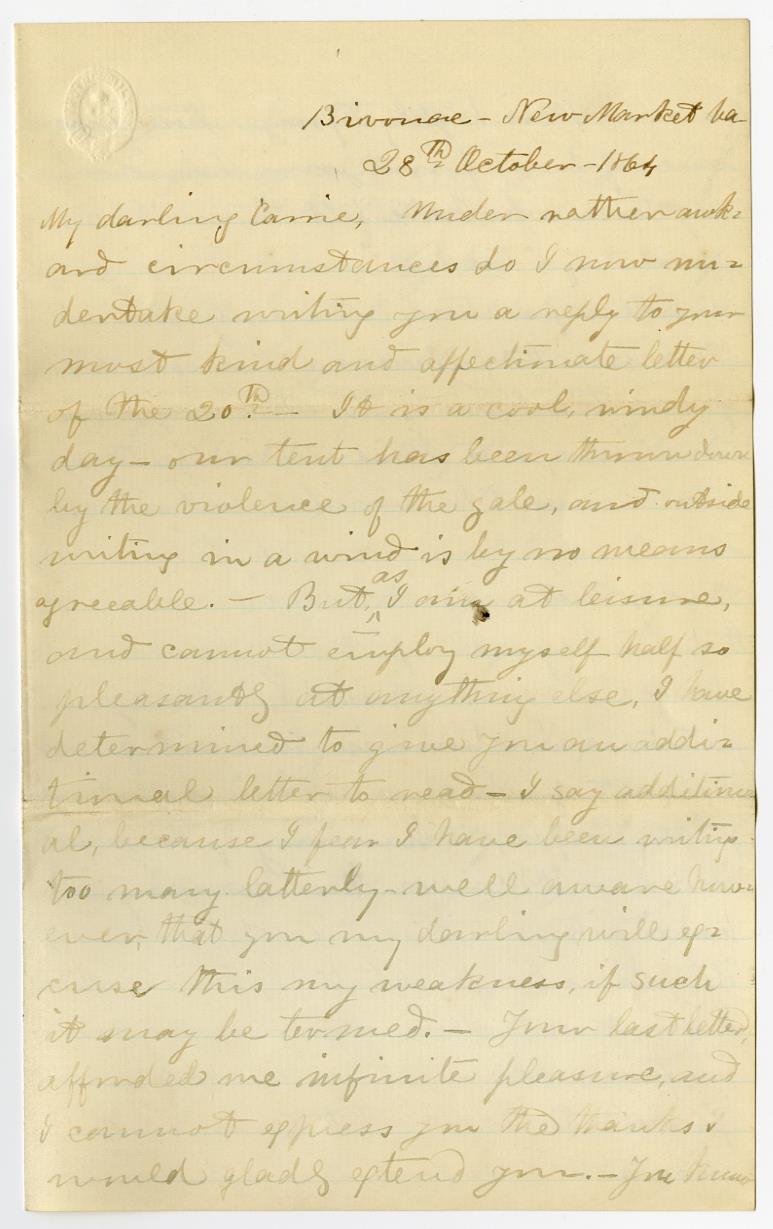 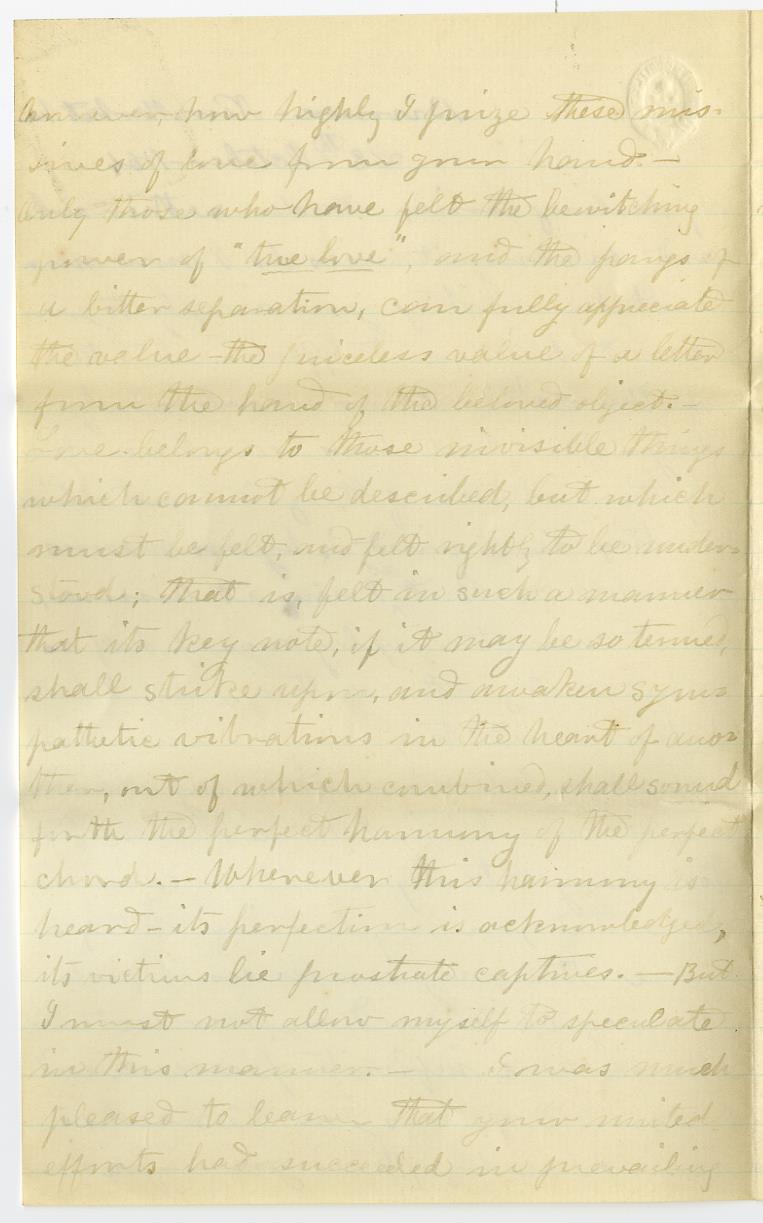 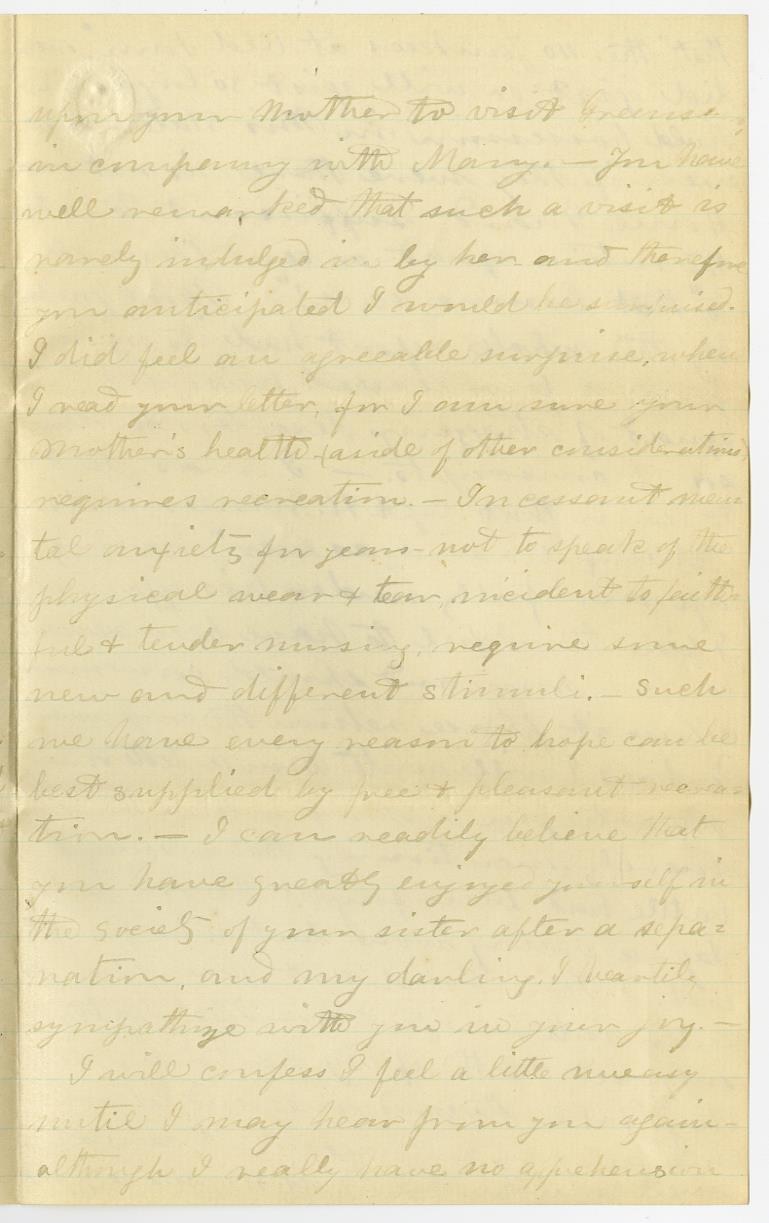 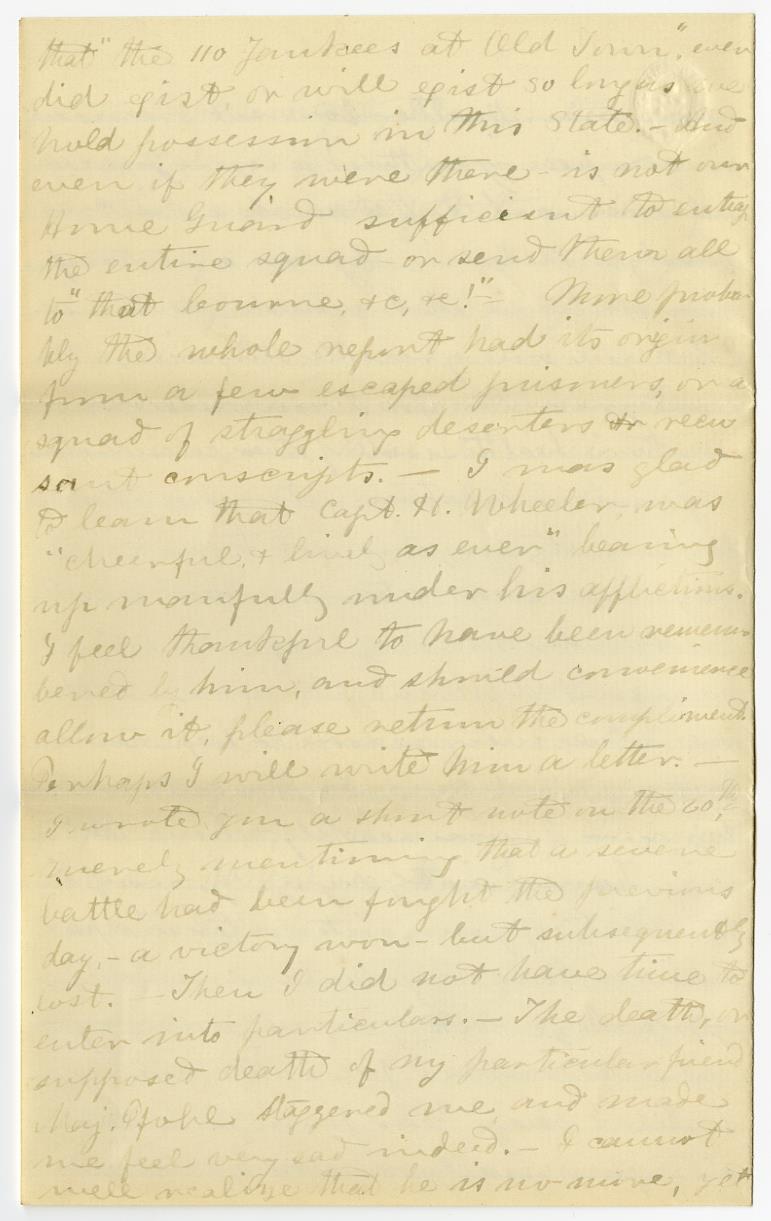 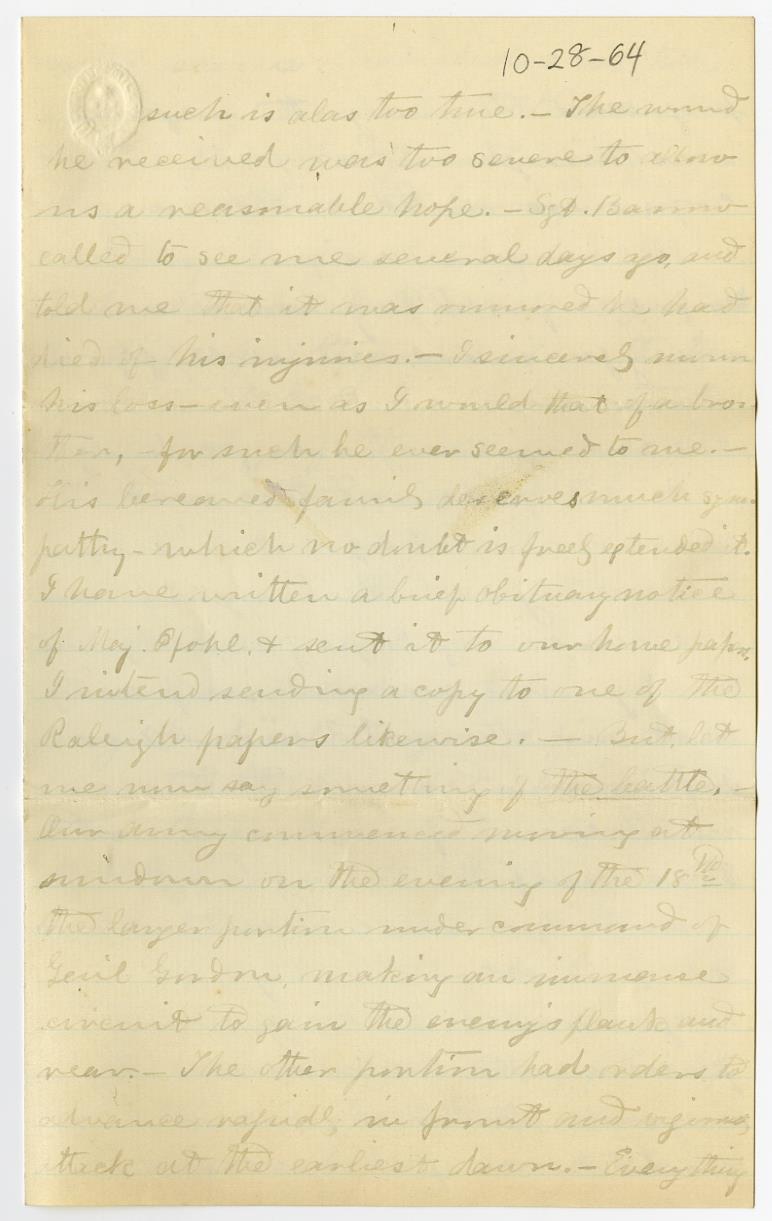 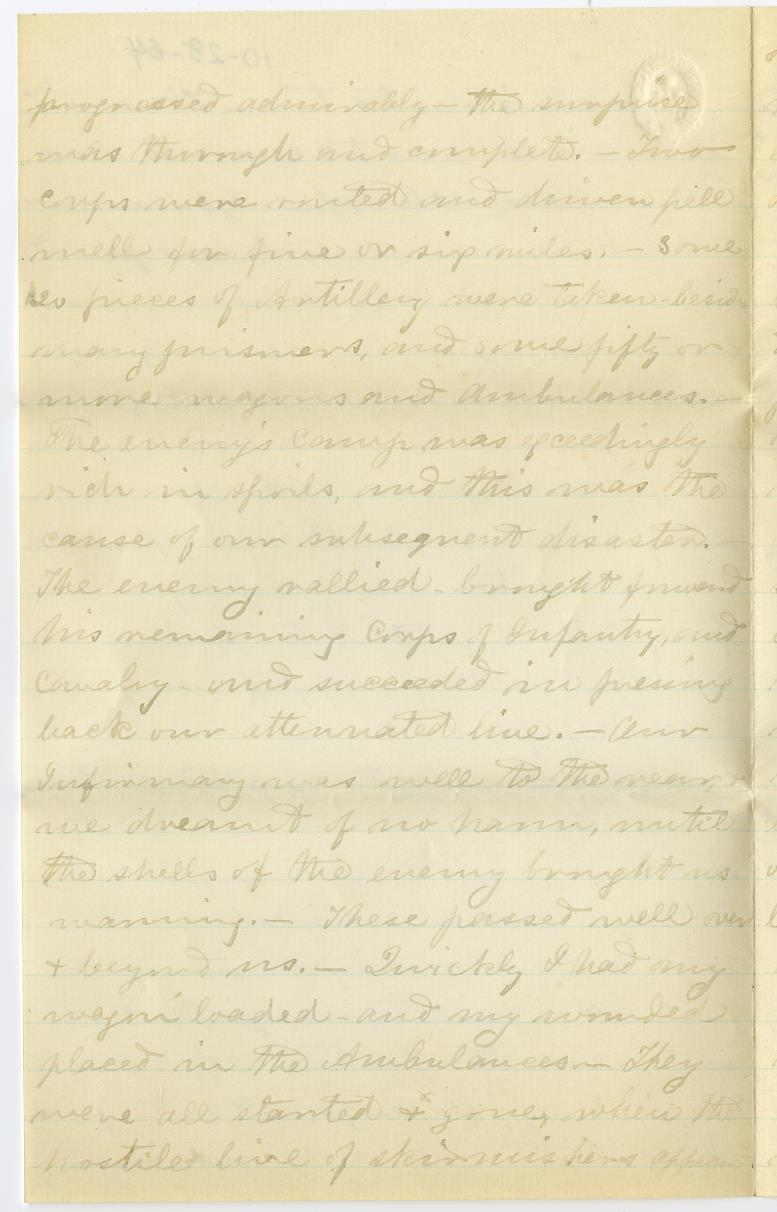 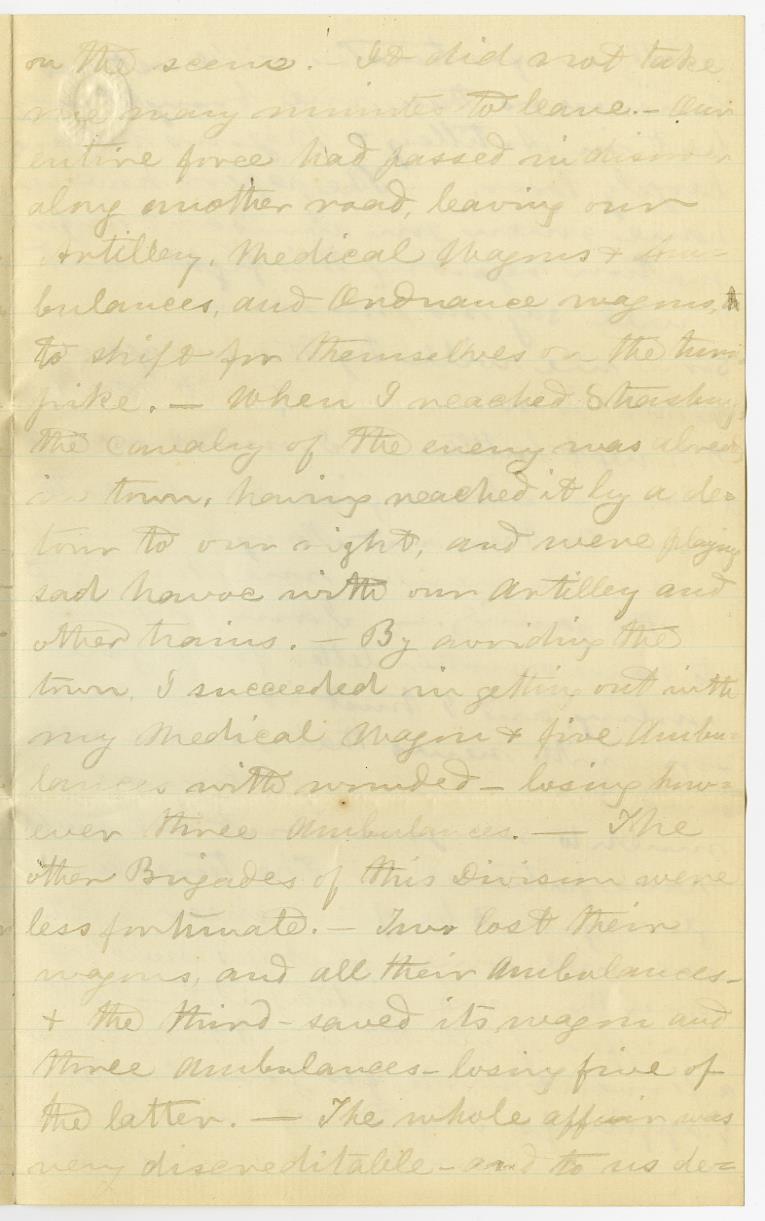 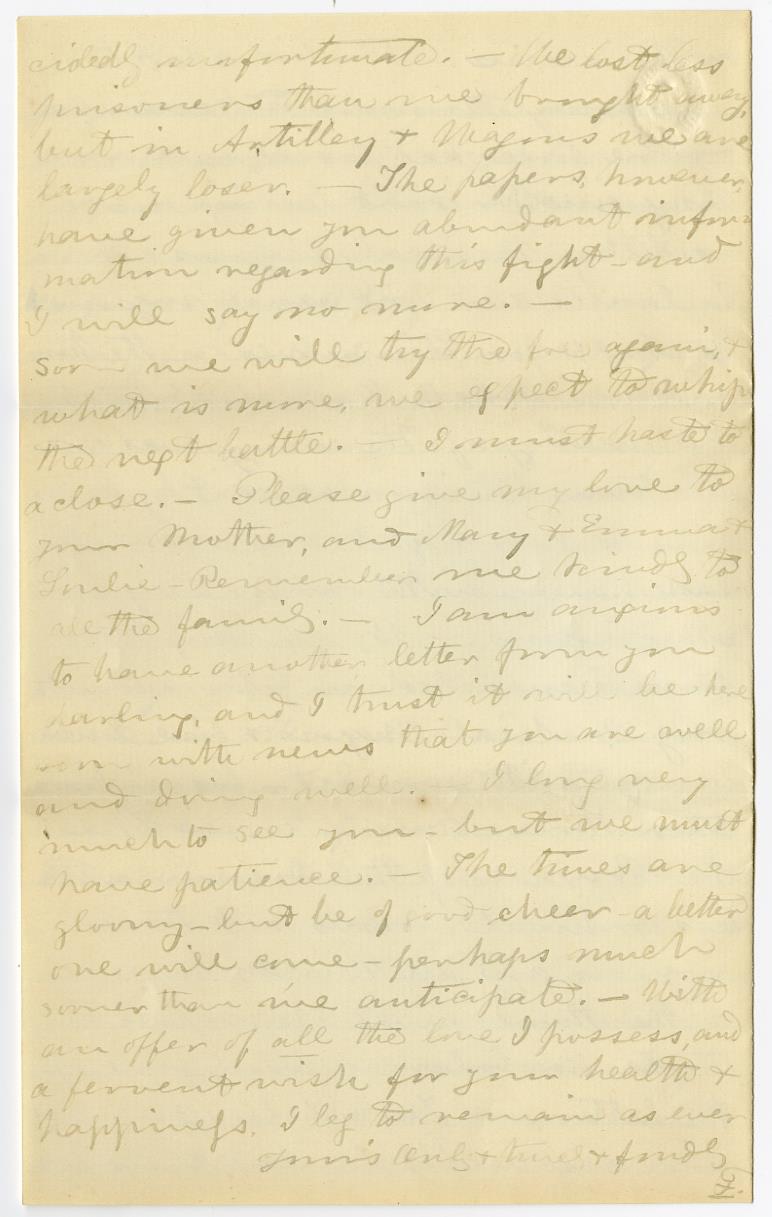 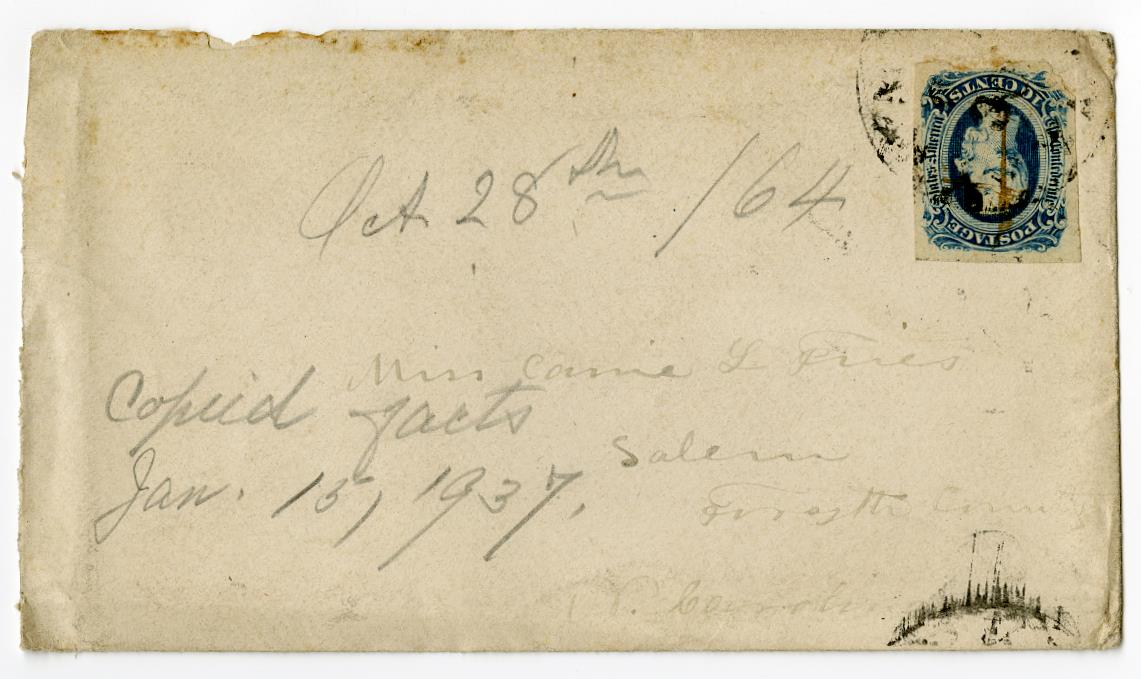 My darling Carrie, Under rather awkward circumstances do I now undertake writing you a reply to your most kind and affectionate letter of the 20th.- It is a cool, windy day- our tent has been thrown down by the violence of the gale, and outside writing in the wind is by no means agreeable.- But as I am at leisure, and cannot employ myself half as pleasantly at anything else, I have determined to give you an additional letter to read- I say additional because I fear I have writing too many latterly- well aware however that you my darling will excuse this my weakness, if such it may be termed.- Your last letter afforded me infinite pleasure and I cannot express you the thanks I would gladly extend you.- You know however how highly I prize these missives of love from your hand.- Truly those who have felt the bewitching power of “true love” and the pangs of a bitter separation, can fully appreciate the value- the priceless value of a letter from the hand of the beloved subject. Love belongs to these invisible things which cannot be described, but which must be felt, and felt rightly to be understood; that is felt in such a manner that its key note, if it may be so termed shall strike upon and awaken your pathetic vibrations in the heart of another out of which combined shall sound forth the perfect harmony of the perfect chord.- Whenever this harmony is heard-its perfection is acknowledged, its victims lie prostrate captives.– But I must not allow myself to speculate in this manner. I was much pleased to learn that your united efforts had succeeded in prevailing upon your Mother to visit Greensboro in company with Mary. — You have well remarked that such a visit is rarely indulged in by her and therefore you anticipated I would be surprised. I did feel an agreeable surprise when I read your letter for I am sure your Mother’s health aside of other considerations requires recreation. — Incessant mental anxieties for years not to speak of the physical wear + tear incident to faithful + tender nursing, require some new and different stimuli. Such we have every reason to hope can be best supplied by free + pleasant recreation. I can readily believe that you have neatly enjoyed yourself in the grief of your sister after a separation and my darling, I heartily sympathize with you in your joy.

I will confess I feel a little uneasy until I may hear from you again although I really have no apprehension that “the 110 Yankees at Old Town,” even did exist or will exist so long as we hold possession in this state. And even if they were there is not our Home Guard sufficient to  the entire squad or send them all to “that ?, etc, etc!” ? probably the whole report had its origin from a few escaped prisoners on a squad of struggling deserters + new servant conscripts. I was glad to learn that Capt. H. Wheeler was “cheerful + lively as ever” bearing up mercifully under his afflictions. I feel thankful to have been remembered to him and should convenience allow it, please return the compliment. Perhaps I will write him a letter.–

I write you a short note on the 20th, merely mentioning that a severe battle had been fought the previous day, – a victory won- but subsequently lost.– Then I did not have the time to enter into particulars.- The death, or supposed death of my particular friend Maj. Pfhol staggered me and made me feel very sad indeed. — I cannot well realize that he is no more, yet such is alas too true.– The wound he received was too severe to allow us a reasonable hope.– Sgt. Barrow called to see me several days ago, and told me that it was rumored he had died of his injuries.– I sincerely mourn his loss- even as I would that of a brother, for such he ever seemed to me.- His bereaved family deserves much sympathy- which no doubt is freely extended it. I have written a brief obituary notice of Maj. Pfohl + sent it to our home paper. I intend sending a copy to one of the Raleigh papers likewise. — But let me now say something of the battle. Our army commenced moving at sundown on the evening of the 18th, the larger junction under command of Genl Gordon, making an immense circuit to gain the enemy’s flank and rear. The other portion had orders to advance ? in front and ? attack at the earliest dawn. – Everything progressed admirably- the surprise was thorough and complete. – Two corps were routed and driven pellmell for five or six miles. – Some 20 pieces of Artillery were taken beside many prisoners, and some fifty or more wagons and ambulances. The enemy’s camp was exceedingly rich in spoils, and this was the cause of our subsequent disaster. The enemy rallied, brought forward his remaining corps of infantry, and Calvary and succeeded in pressing back our attenuated line. Our Infirmary was well to the rear + we dreamt of no harm, until the shells of the enemy brought us warning.- These passed well over + beyond us. Quickly I had my wagon loaded- and my wounded placed in the Ambulances.- They were all started + gone when the hostile line of skirmishes appeared on the scene. It did not take me many minutes to leave.- Our entire force had passed in disorder along another road, leaving our Artillery, Medical Wagons, + Ambulances, and Ordnance wagons to shift for their selves on the turnpike.– When I reached Strasburg, the Calvary of the enemy was already in town, having reached it by a detour to our right, and were playing sad havoc with our artillery and other trains. By avoiding the town, I succeeded in getting out with my Medical wagon + five Ambulances with wounded- losing however three ambulances. — The other Brigades of this Division were less fortunate.- Two lost their wagons, and all their ambulances + the third- saved its wagon and three ambulances- losing five of the latter.- The whole affair was very diseneditable[sic]- and to us decidedly unfortunate.– We lost less provisions than we brought away but in Artillery + Wagons we are largely loser.– The papers however have given you abundant information regarding this fight and I will say no more.–

Soon we will try the foe again, + what is more, we expect to whip the next battle. I must haste to a close.- Please give my love to your Mother, and Mary + Emma + Julie- Remember me fondly to all the family. — I am anxious to have another letter from you darling and I trust it will be here soon with news that you are well and doing well. I long very much to see you- but we must have patience. – The times are gloomy- but be of good cheer- a better one will come- perhaps much sooner than we anticipate. – With an offer of all the love I possess, and a fervent wish for your heath + happiness, I beg to remain as every Youts only + truly + fondly, J.