22 January 1865: “Tis a melancholy truth, that there is not corn enough in the county for its inhabitants to subsist on, and yet it is being made up into whiskey.”

Item Description: Letter to Sarah (Sade) J. Lenoir from her niece. She writes about a series of raids involving armed women stealing corn.  She goes into great detail about a raid on Pinesville where the women were driven off by a drunk man wielding a brush.  She also describes social functions being thrown in honor of soldiers on furlough. 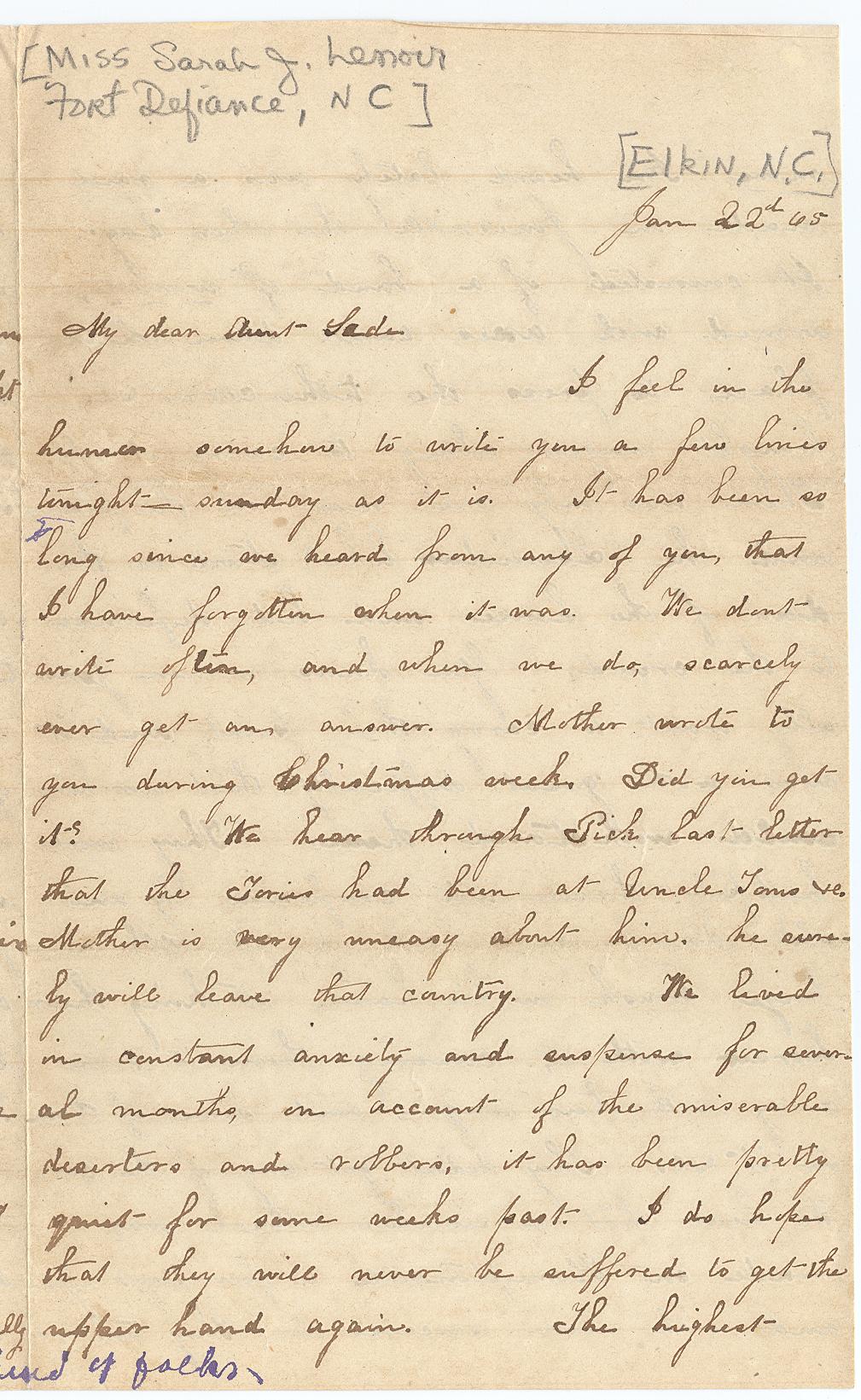 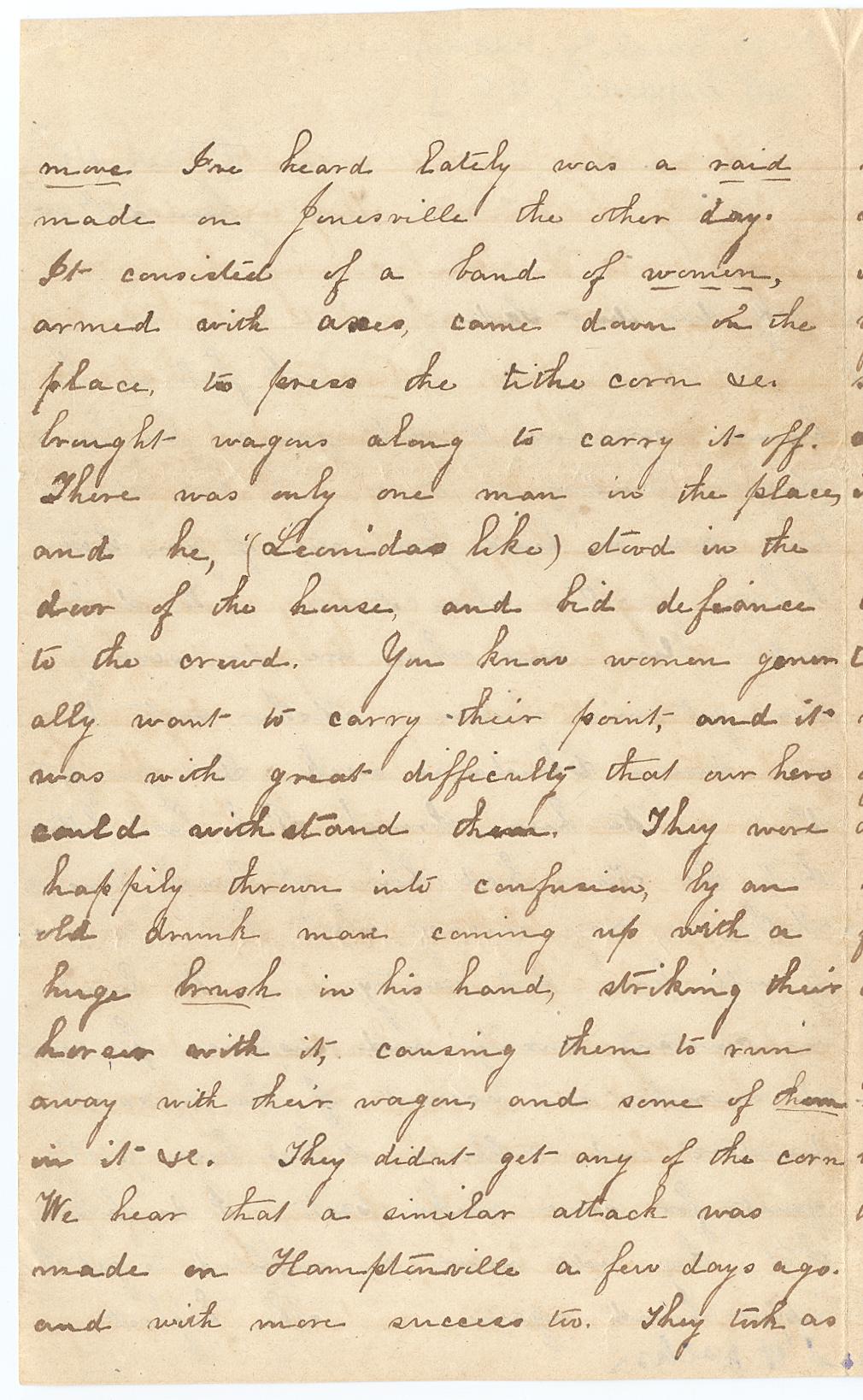 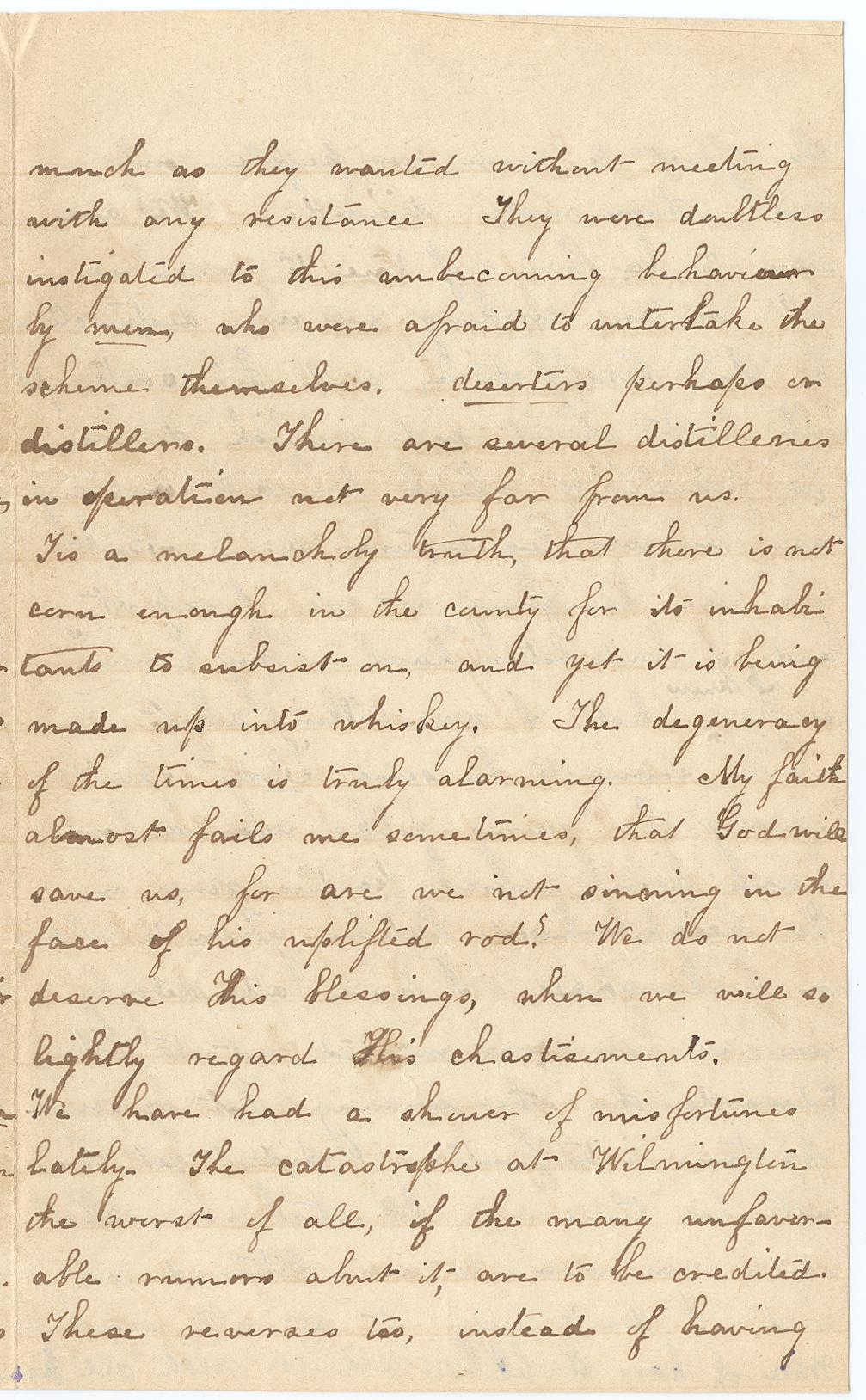 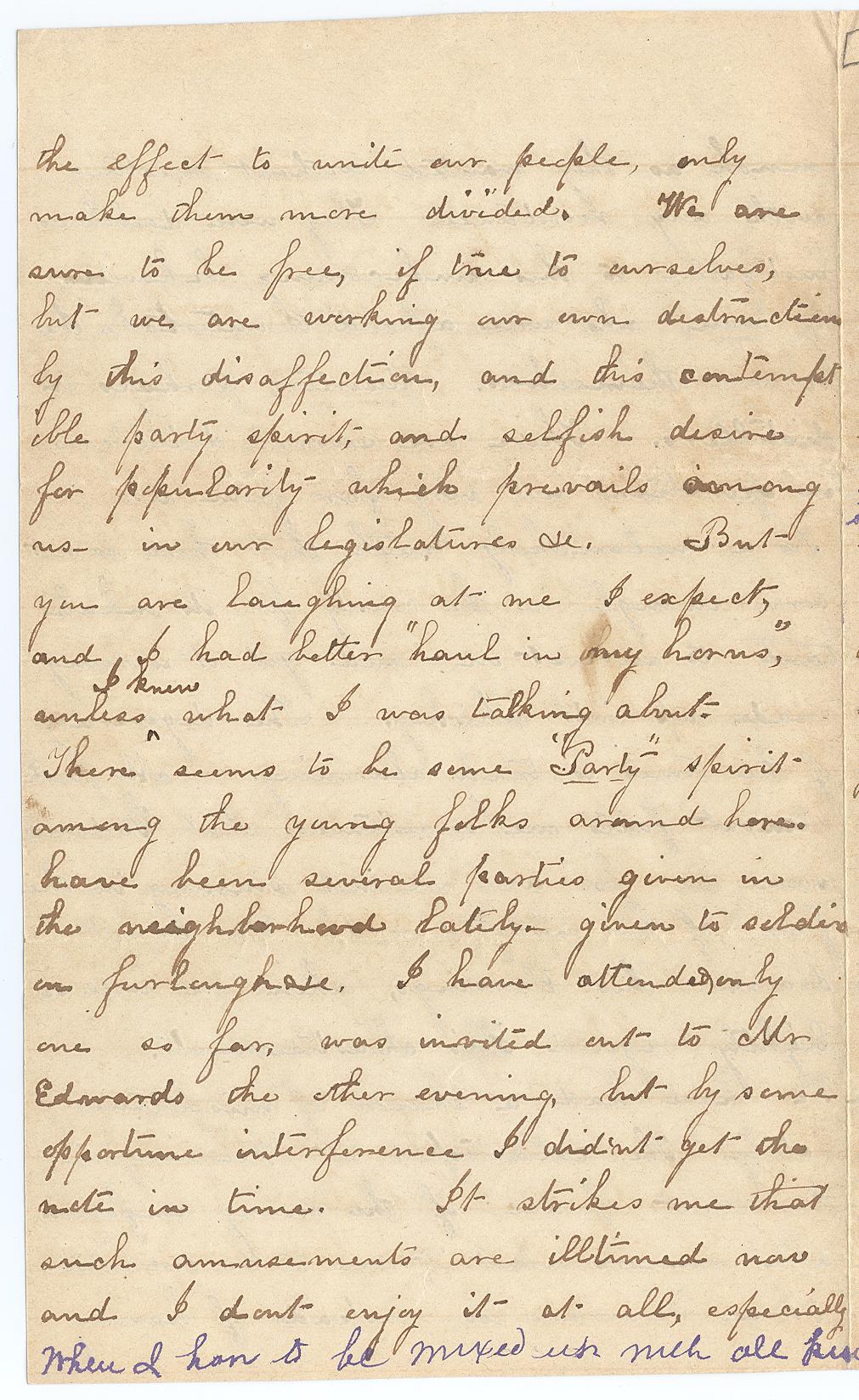 I feel in the humor somehow to write you a few lines tonight, sunday as it is. It has been so long since we heard from any of you, that I have forgotten when it was. We dont write often, and when we do, scarcely ever get any answer. Mother wrote to you during Christmas week. Did you get it? We hear through Tick last letter that the Tories had been at Uncle Toms vc. Mother is very uneasy about him, he surely will leave that country. We lived in constant anxiety and suspense for several months, on account of the miserable deserters and robbers, it has been pretty quiet for some weeks past. I do hope that they will never be suffered to get the upper hand again. The highest move Ive heard lately was a raid made on Pinesville the other day. It consisted of a band of women, armed with axes, came down on the place, to press the tithe corn vc, brought wagons along to carry it off. There was only one man in the place, and he, (Leonidas like) stood in the door of the house and bid defiance to the crowd. You know women generally want to carry their point, and it was with great difficulty that our hero could withstand them. They were happily thrown into confusion, by an old drunk man coming up with a huge brush in his hand, striking their horses with it, causing them to run away with their wagon and some of them in it vc. They didnt get any of the corn. We hear that a similar attack was made on Hamptonsville a few days ago and with more success too. They took as much as they wanted without meeting with any resistance. They were doubtless instigated to this unbecoming behavior by men, who were afraid to undertake the scheme themselves. deserters perhaps or distillers. There are several distilleries in operation not very far from us. Tis a melancholy truth, that there is not corn enough in the county for its inhabitants to subsist on, and yet it is being made up into whiskey. The degeneracy of the times is truly alarming. My faith almost fails me sometimes that God will save us, for are we not sinning in the face of his uplifted rod? We do not deserve His blessings, when we will so lightly regard His chastisements. We have had a shower of misfortunes lately. The catastrophe at Wilmington the worst of all, if the many unfavorable rumors about it, are to be credited. These reverses too, instead of having the effect to unite our people, only make them more divided. We are sure to be free, if time to ourselves, but we are working our own destruction by this disaffection, and this contemptible party spirit, and selfish desire for popularity, which prevails among us in our legislature vc. But you are laughing at me I expect, and I had better “haul in my horns,” unless I knew what I was talking about. There seems to be some “Party” spirit among the young folks around here, have been several parties given in the neighborhood lately given to soldiers on furlough vc. I have attended only one so far, was invited out to Mr Edwards the other evening, but by some opportune interference I didnt get the note in time. It strikes me that such amusements are illtimed now and I dont enjoy it at all, especially when I have to be mixed up with all kind of folks.