29 January 1865: “All the iron clads have gone down there and I am expecting every day to hear that Charleston is taken”

Item Description: Letter from James Gifford to his parents in New Bedford, MA.  He discusses the movements of Union naval ships towards Wilmington, NC and Charleston, SC.  He also discusses purchasing shoes in Beaufort, NC and exchanging photographs with other soldiers and sailors.  James Gifford was United States Navy paymaster steward serving on the USS Release. 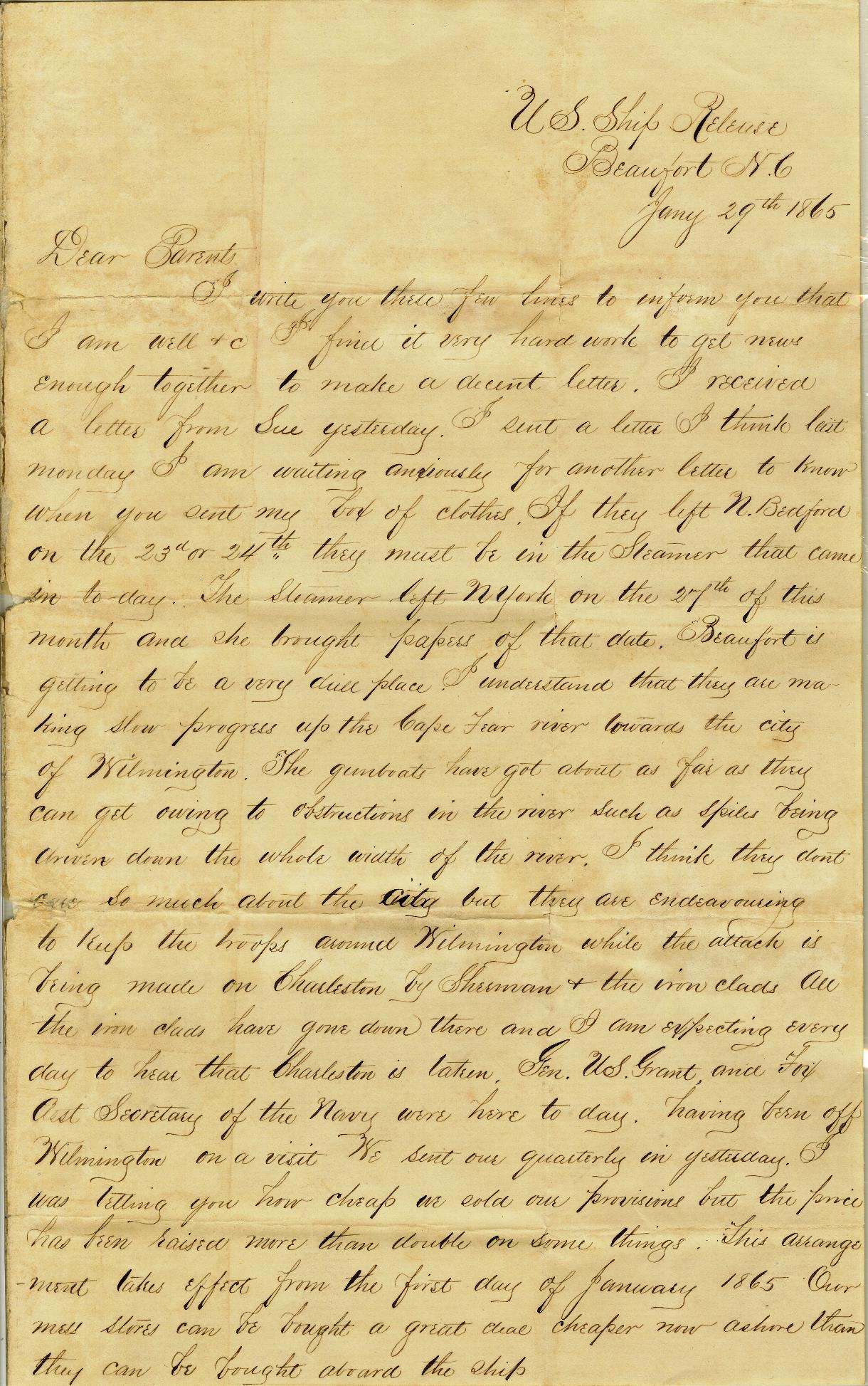 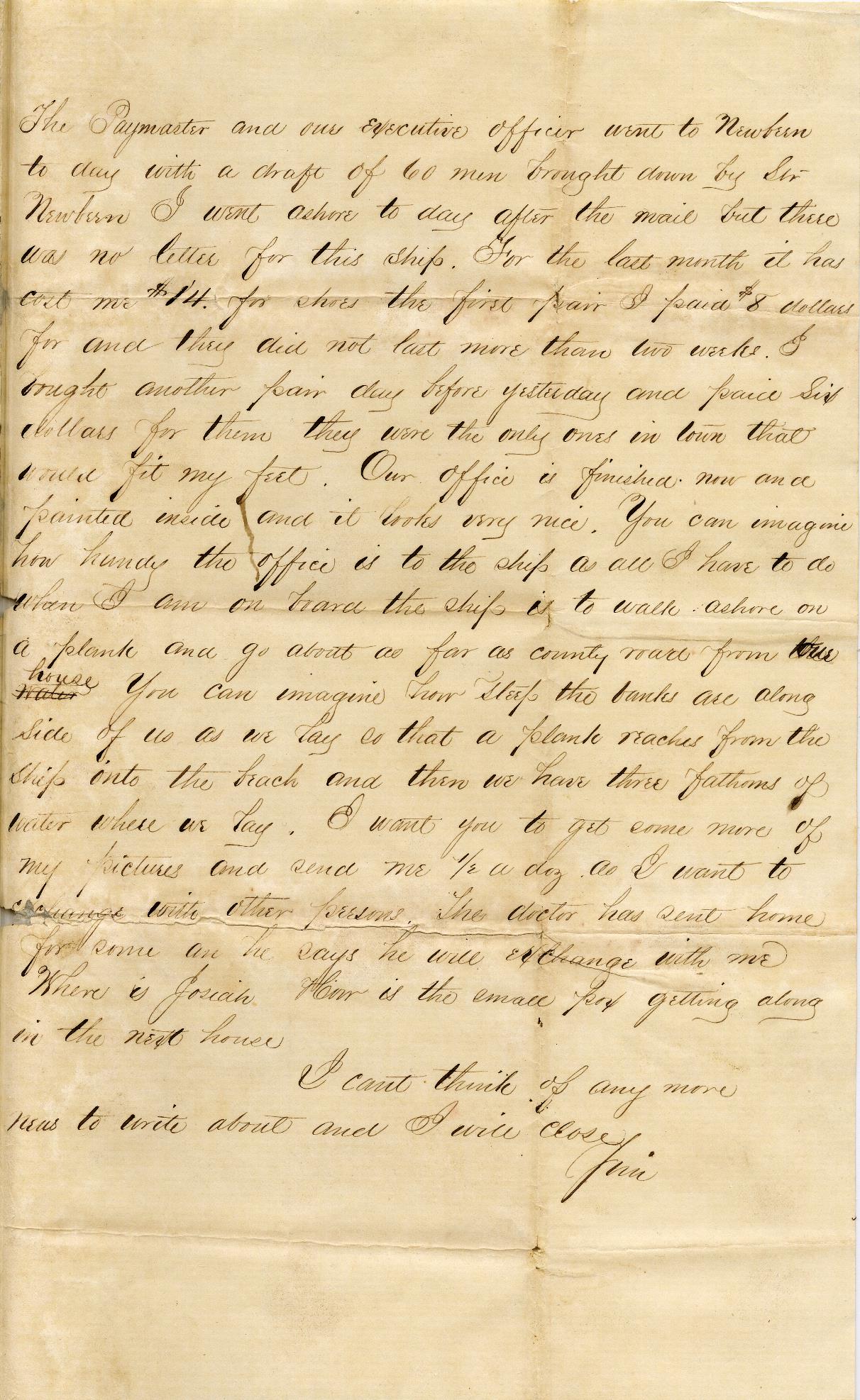 I write you these few lines to inform you that I am well &c. I find it very hard work to get news enough together to make a decent letter. I received a letter from Sue yesterday. I sent a letter I think last Monday. I am waiting anxiously for another letter to know when you sent my box of clothes. If they left N. Bedford on the 23d or 24th they must be in the steamer that came in to-day. The steamer left N York on the 27th of the month and she brought papers of that date. Beaufort is getting to be a very dull place. I understand that they are making slow progress up the Cape Fear river towards the city of Wilmington. The gunboats have got about as far as they can get owing to obstructions in the river such as spiles being driven down the whole width of the river. I think they dont care so much about the city but they are endeavoring to keep the troops around Wilmington while the attack is being made on Charleston by Sherman + the iron clads. All the iron clads have gone down there and I am expecting every day to hear that Charleston is taken.  Gen. US. Grant and Fox Asst Secretary of the Navy were here to day, having been off Wilmington on a visit. We sent our quarterly in yesterday. I was telling you how cheap we sold our provisions but the price has been double on some things. This arrangement takes effect from the first day of January 1865. Our mess stores can be bought a great deal cheaper now ashore than they can be bought aboard the ship.

The Paymaster and our executive officer went to Newbern to day with a draft of 60 men brought down by Sir Newbern. I went ashore to day after the mail but there was no letter for this ship. For the last month it has cost me $14. for shoes the first pair I paid $8 dollars for and they did not last more than two weeks. I bought another pair day before yesterday and paid Six dollars for them. They were the only ones in town that would fit my feet. Our office is finished now and painted inside and it looks very nice. You can imagine how handy the office is to the ship as all I have to do when I am on board the ship is to walk ashore on a plank and go about as far as country road from the house. You can imagine how steep the banks are along side of us as we lay so that a plank reaches from the ship into the beach and then we have three fathoms of water where we lay. I want you to get some more my pictures and send me 1/2 a dozen as I want to exchange with other persons. The doctor has sent home for some an he says he will exchange with me. Where is Josiah How is the small pox getting along in the next house.

I cant think of any more to news to write about and I will close.