Posted on 21 Mar ’15 by Rebecca Williams

Item Description: Letter dated 21 March 1865 in which the author expresses concerns for her friends and family and the difficulties of contacting them. 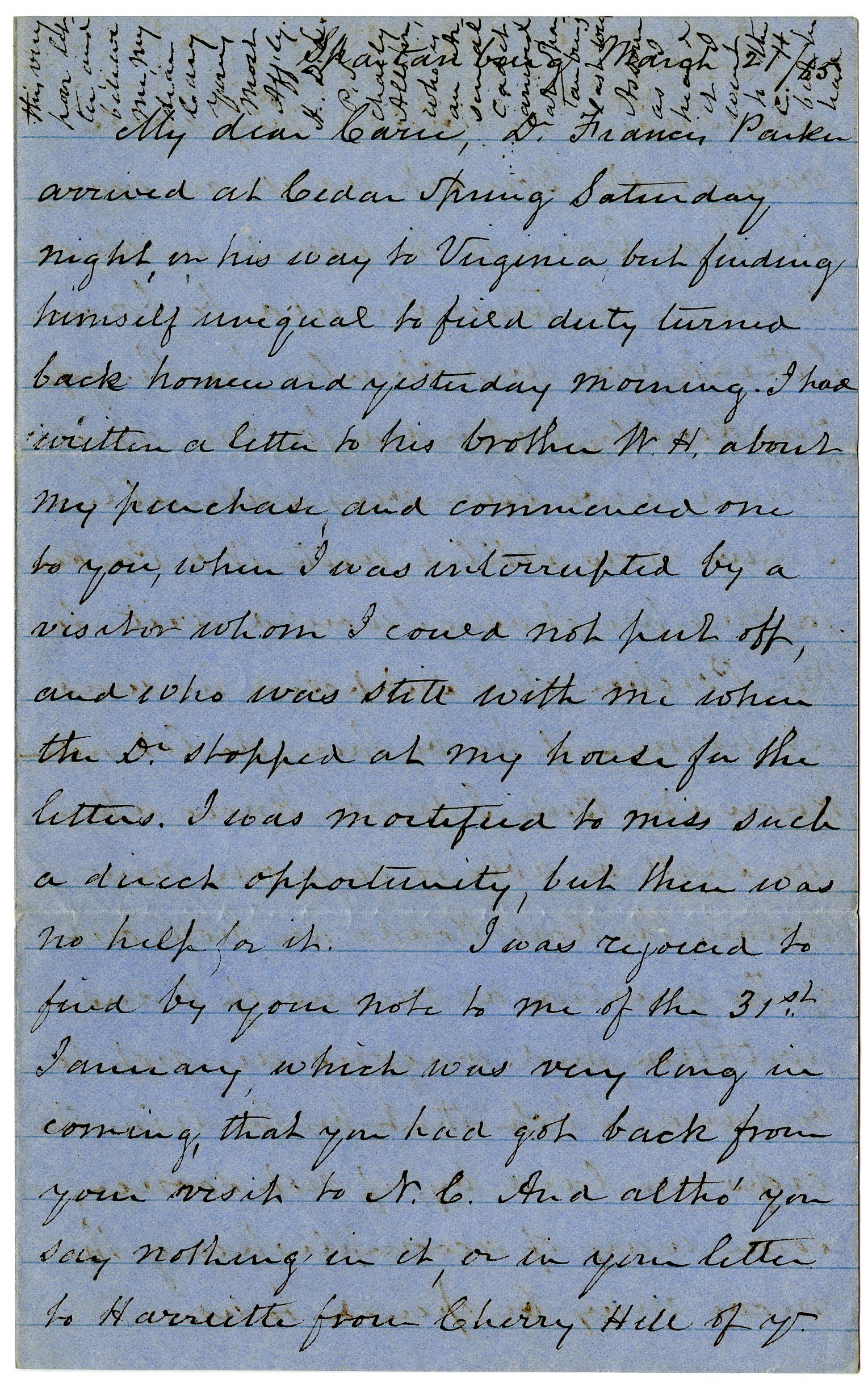 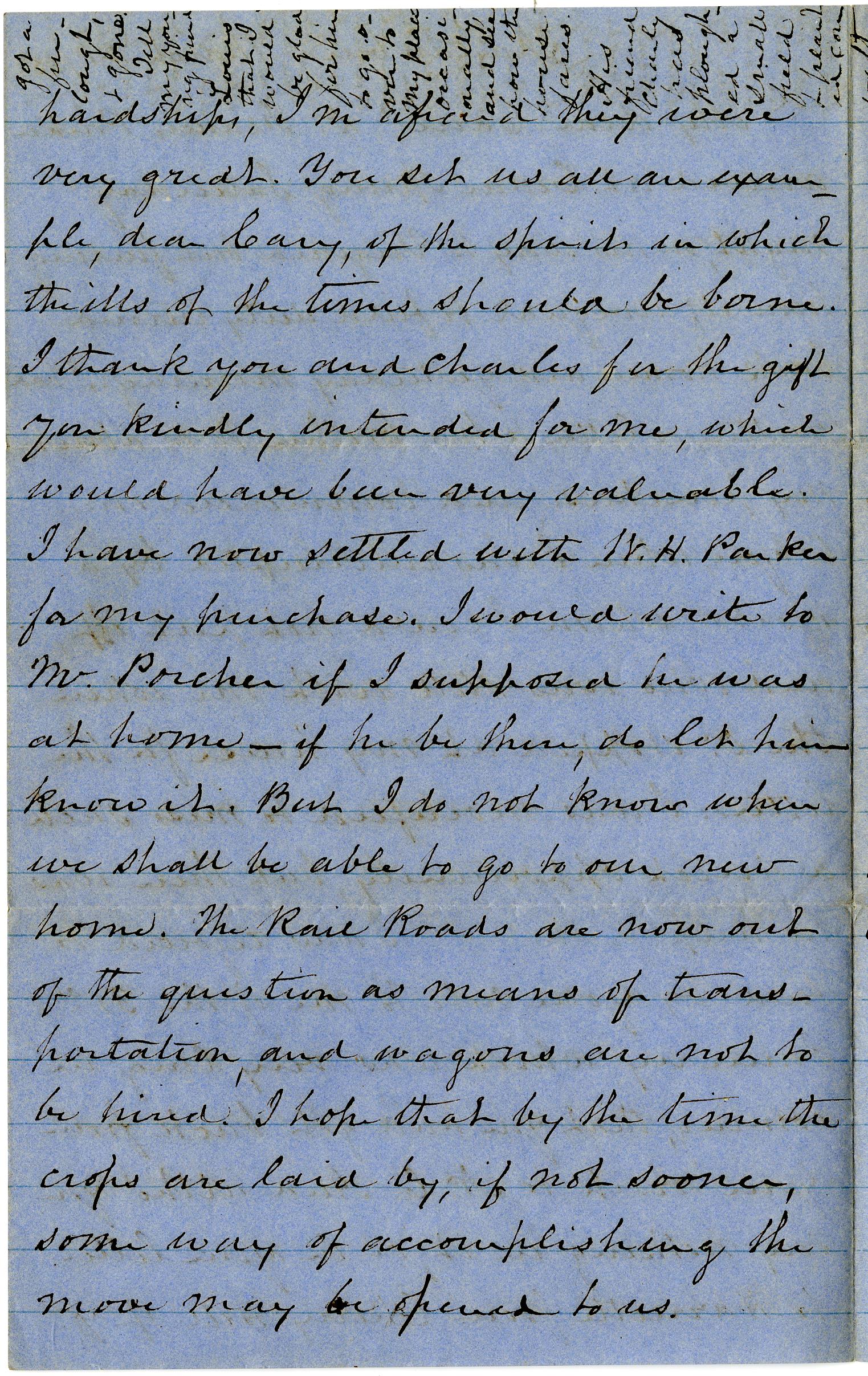 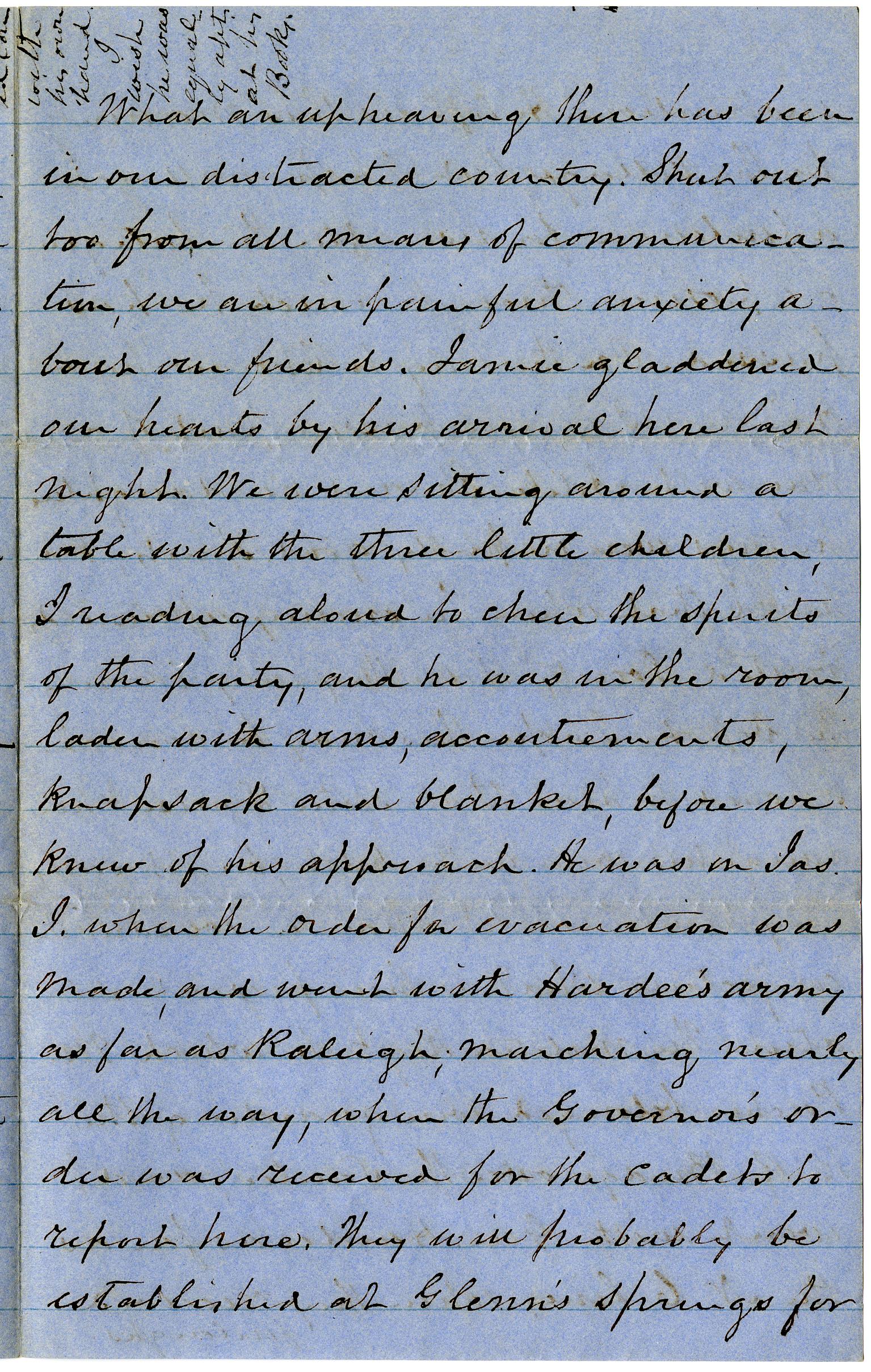 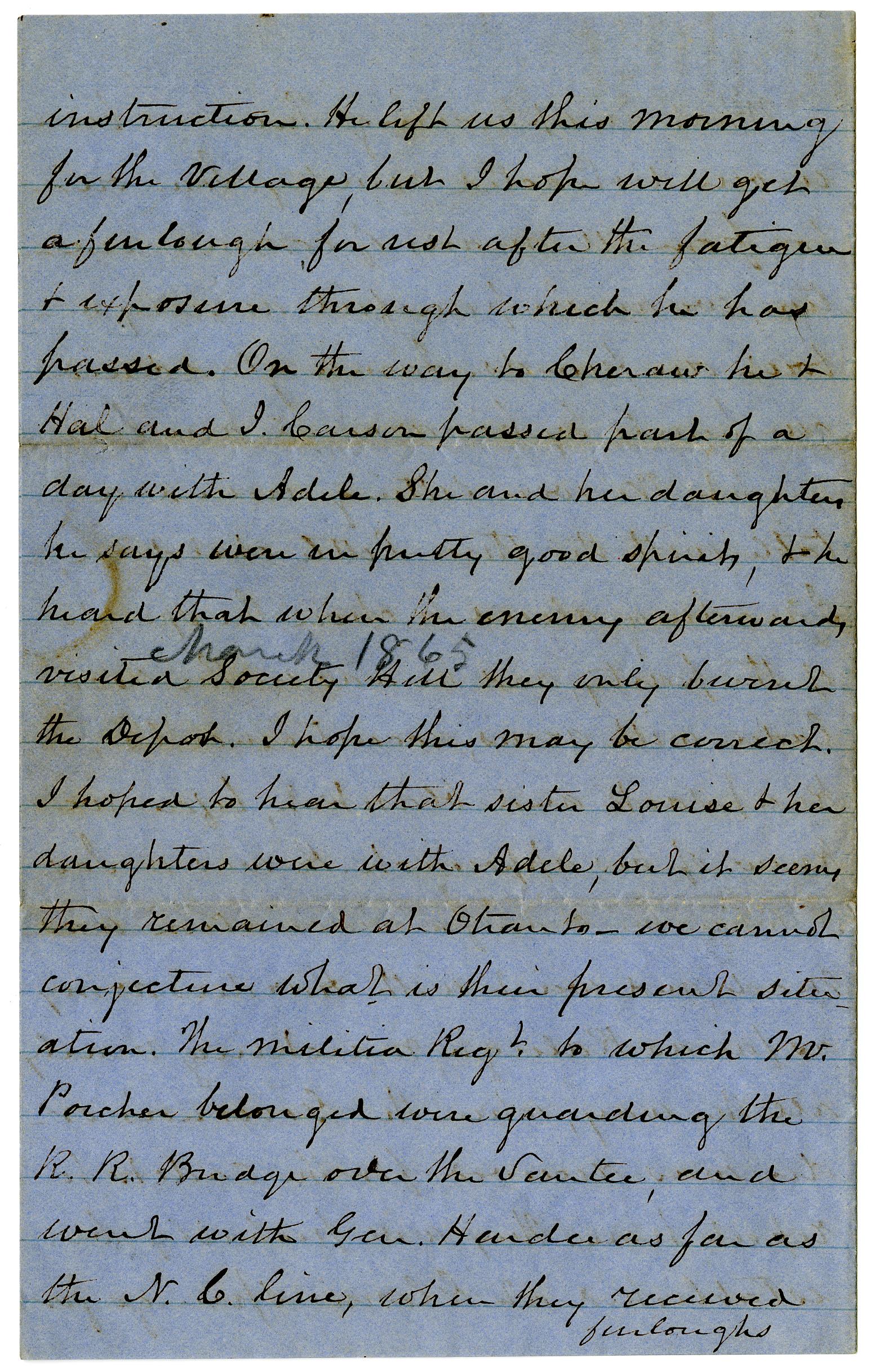 My dear Carrie, Dr. Frances Parker arrived at Cedar Spring Saturday night, on his way to Virginia but finding himself unequal to field duty turned back home and yesterday morning I had written a letter to his brother W.H. about my purchase and commenced one to you, when I was interrupted by a visitor whom I could not put off, and who was still with me when the Dr. stopped at my house for the letters. I was mortified to miss such a direct opportunity, but there was no help for it.

I was rejoiced to find by your note to me of the 31st January, which was very long in coming, that you had got back from your visit to N.C. And altho’ you say nothing in it, or in your letter to Harriette from Cherry Hill of yr hardships, I’m afraid they were very great. You set us all an example, dear Cary, of the spirit in which the ills of the times should be borne. I thank you and Charles for the gift you kindly intended for me, which would have been very valuable. I have now settled with W.H. Parker for my purchase. I would write to Mr. Porcher if I supposed he was at home__ if he be there, do let him know it. But I do not know when we shall be able to go to our new home. The Rail Roads are now out of the question as means of transportation, and wagons are not to be hired. I hope that by the time the crops are laid by, if not sooner, some way of accomplishing the move may be opened to us.

What an upheaving there has been in our distracted country. Shut out too from all manner of communication, we are in painful anxiety about our friends. Jannie gladdened our hearts by his arrival here last night. We were sitting around a table with the three little children, I reading aloud to cheer the spirits of the party, and he was in the room, laden with arms, accoutrements, knapsack and blanket, before we knew of his approach. He was in Jas. I. when the order for evacuation was made, and wasn’t with Hardee’s army as far as Raleigh, marching nearly all the way, when the Governor’s order was received for the cadets to report here. They will probably be established at Glenn’s Springs for instruction. He left us this morning for the village, but I hope will get a furlough for rest after the fatigue and exposure through which he has passed. On the way to Cherow he + Hal and I Carson passed part of a day with Adele. She and her daughter he says were in pretty good spirits, + he heard that when the enemy afterward visited Society Hill they only burnt the Depot. I hope this may be correct. I hoped to hear that sister Louise + her daughters were with Adele, but it seems they remained at Otranto_ we cannot conjecture what is their present situation. The militia Regt to which Mr. Porcher belonged were guarding the R.R. Bridge over the Santee, and went with Gen. Hardee as far as the N.C. line, when they received furloughs

[at the top of the first page]

this very poor letter and believe me, my dear Cary your most affectionately, H. D. d.

P.S. Charly Alston, who is an unusual cadet arrived at Spartanburg last ? As soon as I heard it I went to the C. H. bed he had got a furlough + gone. Tell my young friend Louis that I would be glad for him to go over to my place occasionally and see how the house fares. His friend Charly has ploughed a small field and planted ? his own hand. I wish he was equally apt at his Books.