25 March 1865: “This is my first and I hope will be my very last fight, as it is anything but agreeable to see men fall all around you killed or wounded.”

Item Description: Letter written by Henry Armand London to his father.  He describes the events of the Battle of Fort Stedman, a failed attempt by the Confederate Army to break the siege on Petersburg.  He mentions wounded and captured members of his regiment.  He served as a courier in Company I of the 32nd North Carolina Infantry Regiment and participated in one of the last actions of the Civil War in carrying the message to General William R. Cox to cease firing because Robert E. Lee had just surrendered. 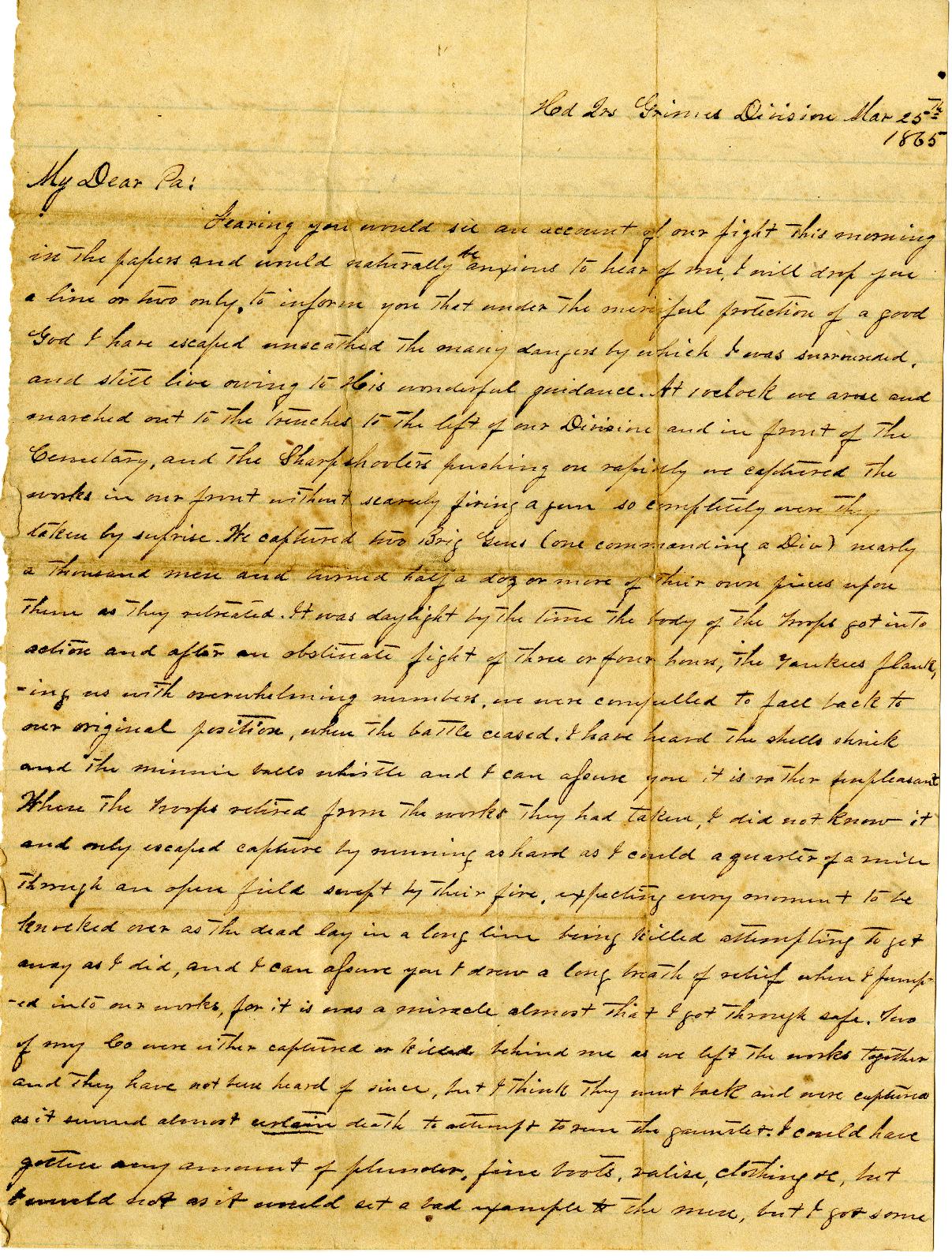 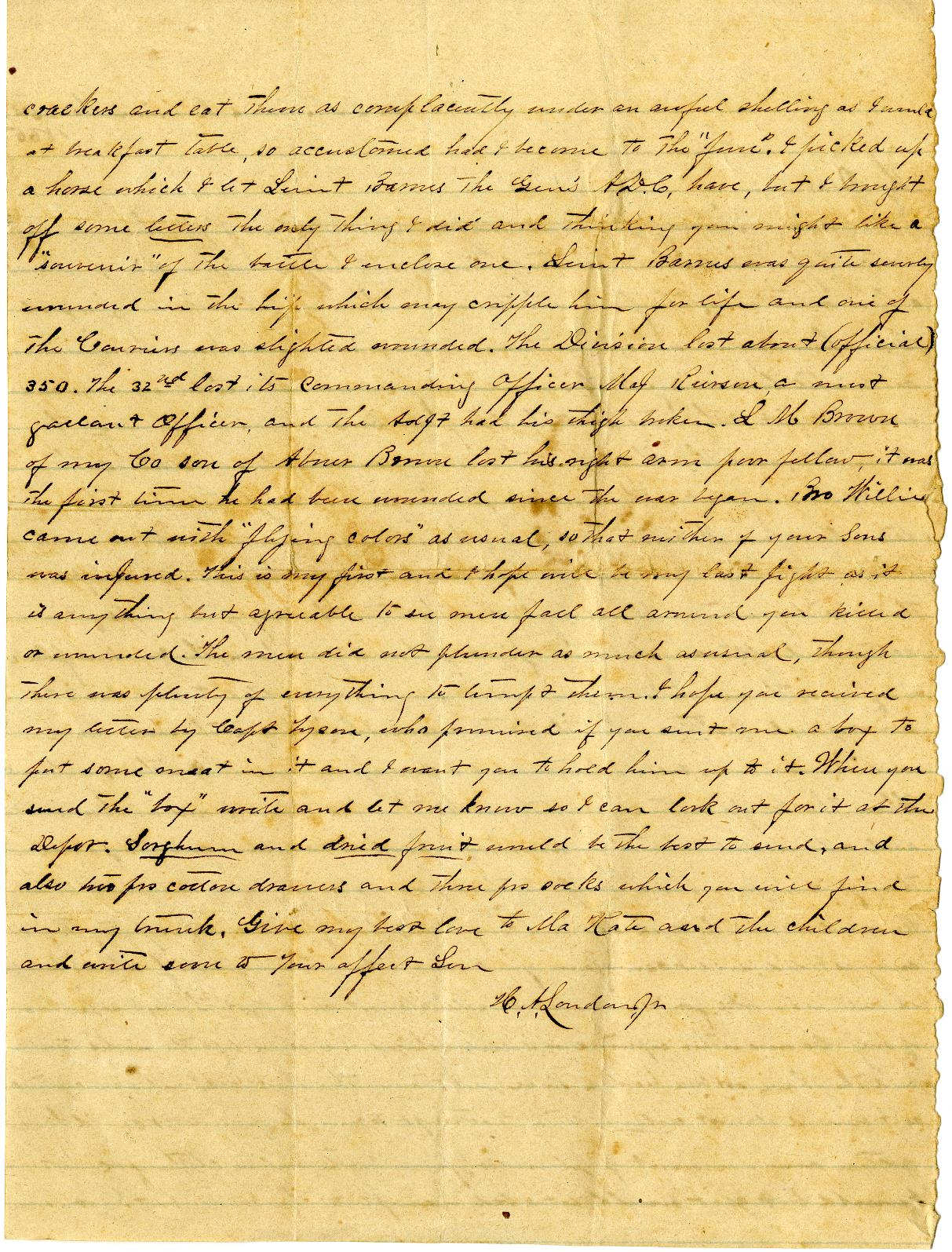 Fearing you would see an account of our fight this morning in the papers and would naturally be anxious to hear of me, I will drop you a line or two only to inform you that under the merciful protection of a good God I have escaped unscathed the many dangers by which I was surrounded and still live owing to His wonderful guidance. At 1 oclock we arose and marched out to the trenches to the left of our Division and in front of the cemetary, and the Sharpshooters pushing on rapidly we captured the works in our front without scarcely firing a gun so completely were they taken by surprise. We captured two Brig Gens (one commanding a Div) nearly a thousand men and turned half a doz or more of their own pieces upon them as they retreated. It was daylight by the time the body of the troops got into action and after an obstinate fight of three or four hours, the Yankees flanking us with overwhelming numbers, we were compelled to fall back to our original position, when the battle ceased. I have heard the shells shriek and the minnie balls whistle and I can assure you it is rather unpleasant. When the troops retired from the works they had taken, I did not know it and only escaped capture by running as hard as I could a quarter of a mile through an open field swept by their fire, expect every moment to be knocked over as the dead lay in a long line being killed attempting to get away as I did, and I can assure you I drew a long breath of relief when I jumped into our works, for it is was a miracle almost that I got through safe. Two of my Co were either captured or killed behind me as we left the works together and they have not been heard of since, but I think they went back and were captured as it seemed almost certain death to attempt to run the gauntlet. I could have gotten any amount of plunder, fine boots, valise, clothing &c, but I would not as it would set a bad example & the men, but I got some crackers and eat them as complacintly under an awful shelling as I would at breakfast table, so accustomed bad I become to the “fun.” I picked up a horse which I let Leint Barnes the Gen’s A.D.C., have, but I bought off some letters the only thing I did and thinking you might like a “souvenir” of the battle I enclose one. Leint Barnes was quite severly wounded in the hip which may cripple him for life and one of the couriers was slightly wounded. The Division lost about (official) 350. The 32nd lost its commanding officer Maj Rirson, a most gallant officer, and the srgt had his thigh broken. L M Brown of my Co son of Abner Brown lost his right arm poor fellow, it was the first time he had been wounded since the war began. Bro William came out with “flying colors” as usual, so that neither of your sons was injured. This is my first and I hope will be my very last fight, as it is anything but agreeable to see men fall all around you killed or wounded. The men did not plunder as much as usual, though there was plenty of everything to tempt them. I hope you received my letter by Capt Tyson, who promised if you sent me a box to put some meat in it and I want you to hold him up to it. When you send the “box” write and let me know so I can look out for it at the Depot. Sorgham and dried fruit would be the best to send, and also two prs cotton drawers and three prs socks which you will find in my trunk. Give my best love to Ma Kate and the children and write soon to your affect Son