Item description: Letter, 16 June 1861, from Joseph Hubbard Saunders to his mother. The letter gives a detailed description of Saunders’ experience in the recent Battle of Bethel Church, shares news about other soldiers from Chapel Hill, and asks about the planting of potatoes back home. 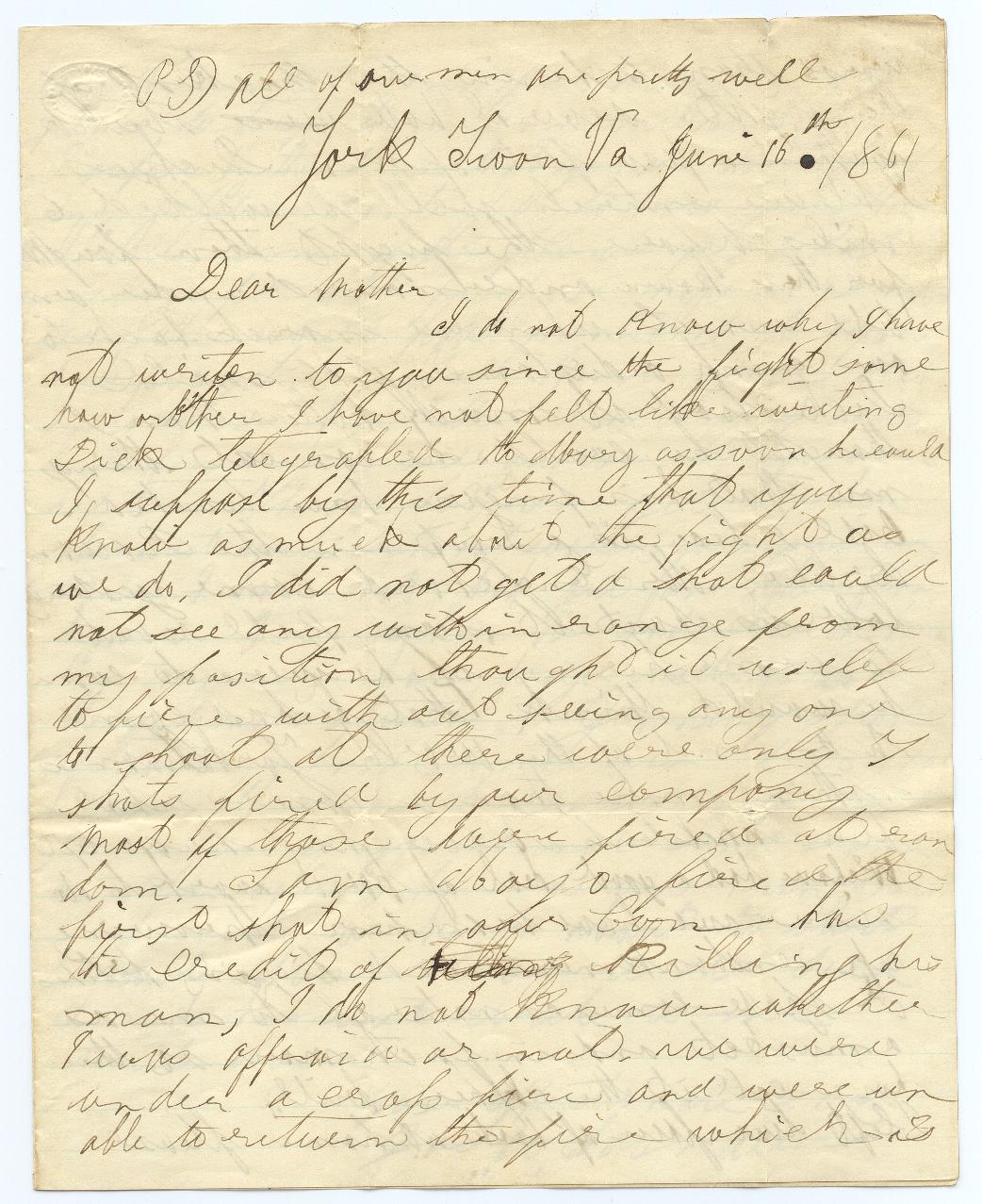 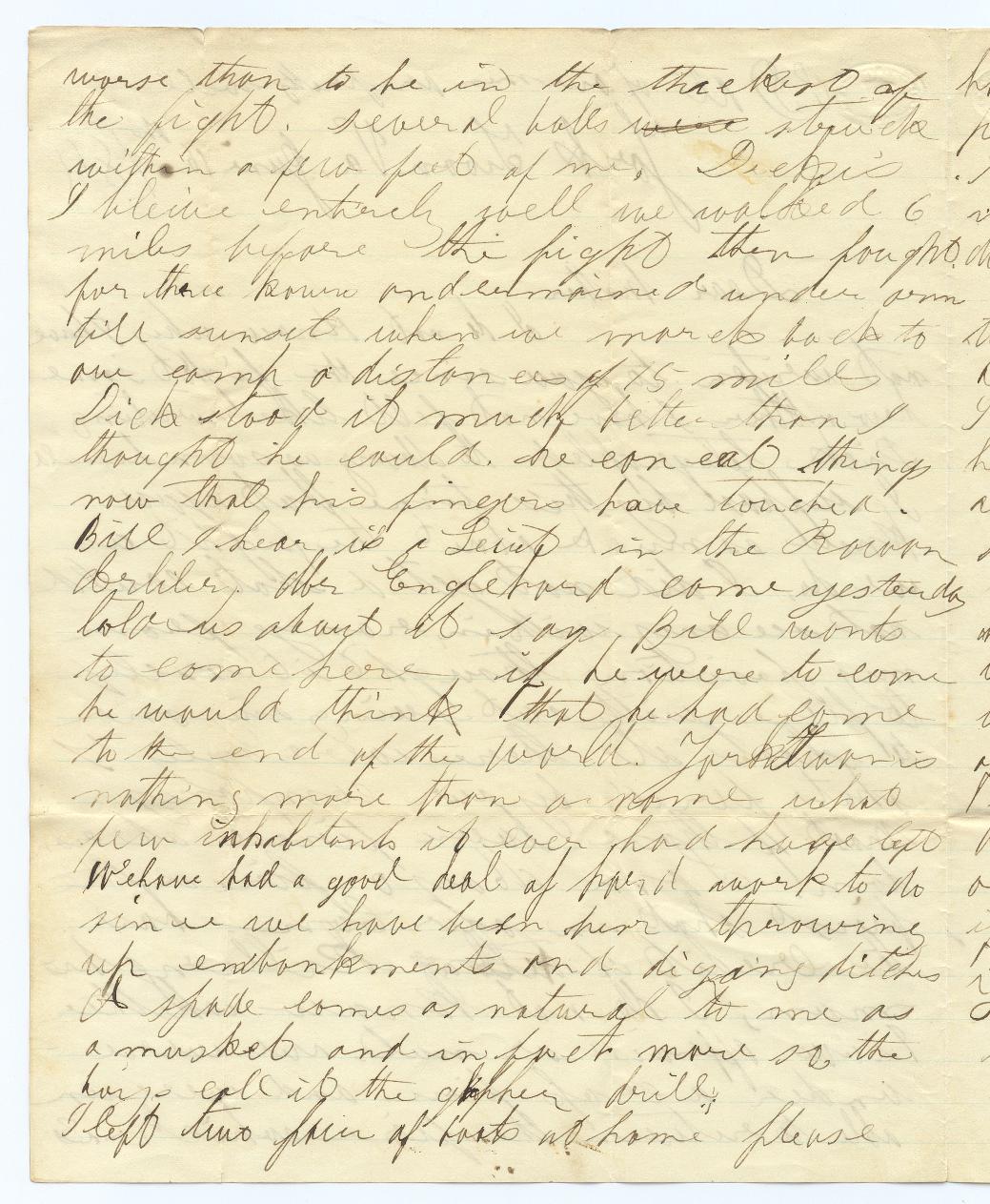 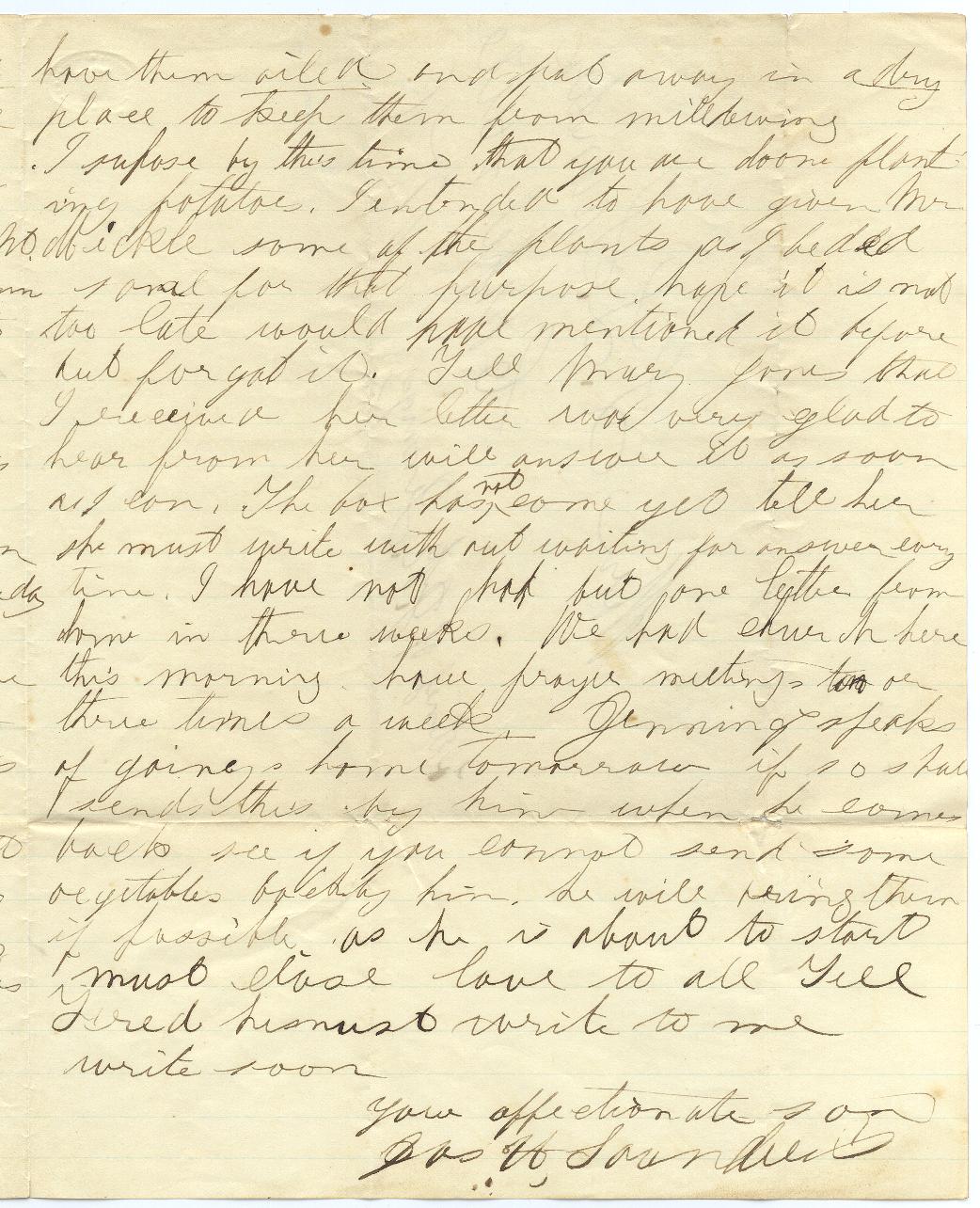 PS – all of our men are pretty well

I do not know why I have not writen to you since the fight. some how or other I have not felt like writing. Dick telegraphed to Mary as soon he could. I supposed by this time that you know as much about the fight as we do. I did not get a shot could not see any within range from my position. Thought it useless to fire with out seeing any one to shoot at there were only 7 shots fired by our company most of those have fired at random. Sam Mayo fired the first shot in our Com. has the credit of killing his man, I do not know whether I was [?] or not. We were under a cross fire and were unable to return the fire which is worse than to be in the thicket of the fight. Several balls struck within a few feet of me. Dick is I beleive entirely well. We walked 6 miles before the fight then fought for three hours and remained under arm[?] till sunset when we marched back to our camp a distances of 15 miles. Dick stood it much better than I thought he could. He can eat things now that his fingers have touched. Bill I hear is a Leiut. in the Rowan Artillery. Mr. Englehard came yesterday told us about it says Bill wants to come here. If he were to come he would think that he had come to the end of the world. Yorktown is nothing more than a name, what few inhabitants it ever had have left. We have had a good deal of hard work to do since we have been here. Throwing up enbankments and digging ditches. A spade comes as natural to me as a musket and in fact more so the boys call it a gopher drill.

I left two pairs of boots at home please have them oiled and put away in a dry place to keep them from mildewing. I suppose by this time that you are done planting potatoes. I intended to have given Mr. Mickle some of the plants as I bedded[?] some for that purpose. Hope it is not too late would have mentioned it before but forgot it. Tell Mary [?] that I received her letter, was very glad to hear from her will answer it as soon as I can. The box has not come yet tell her she must write with out waiting for answer every time. I have not had but one letter from home in three weeks. We had church here this morning, have prayer meetings two or three times a week. Jennings speaks of going home tomorrow if so shall send this by him when we comes back. See if you cannot send some vegetables back by him. He will bring them if possible as he is about to start. I must close. Love to all. Tell Fred he must write to me.

Joseph Hubbard Saunders (1839-1885) of Orange County, N.C., a planter and Confederate officer of the 33rd North Carolina Regiment, served in Virginia and eastern North Carolina, and was imprisoned at Johnson’s Island, Ohio.

Enlistment:
– 21 years of age at time of enlistment
– Enlisted on Apr 6 1861 at Orange County, NC as Private