4 August 1861: “…we may date our trouble from the time when we allowed Party to place in the chair a President, entirely disregarding his worth, ability, or capacity for it…”

Posted on 4 Aug ’11 by Biff Hollingsworth

Item description: Letter from Elodie Todd (1844-1881) to her fiance Nathaniel Henry Rhodes Dawson (1829-1895). Elodie Todd, of Selma, Ala., was the sister of Mary Todd Lincoln (the wife of Abraham Lincoln). At the time of this letter, Nathaniel Henry Rhodes Dawson was serving as an officer in the 4th Alabama Infantry Regiment. During the Civil War, Dawson and Todd exchanged letters almost daily. They later married.

Following on the heels of Dawson’s letter of 3 August 1861 to Todd (although it is nearly certain that Todd had not yet received that letter), Todd writes extensively of her devotion to Dawson and readiness to marry, mentions several visits from rival suitors, she gives her opinion of party politics and of the abilities of President Abraham Lincoln (her brother-in-law), and she writes of other news from the home front in Selma, Ala. 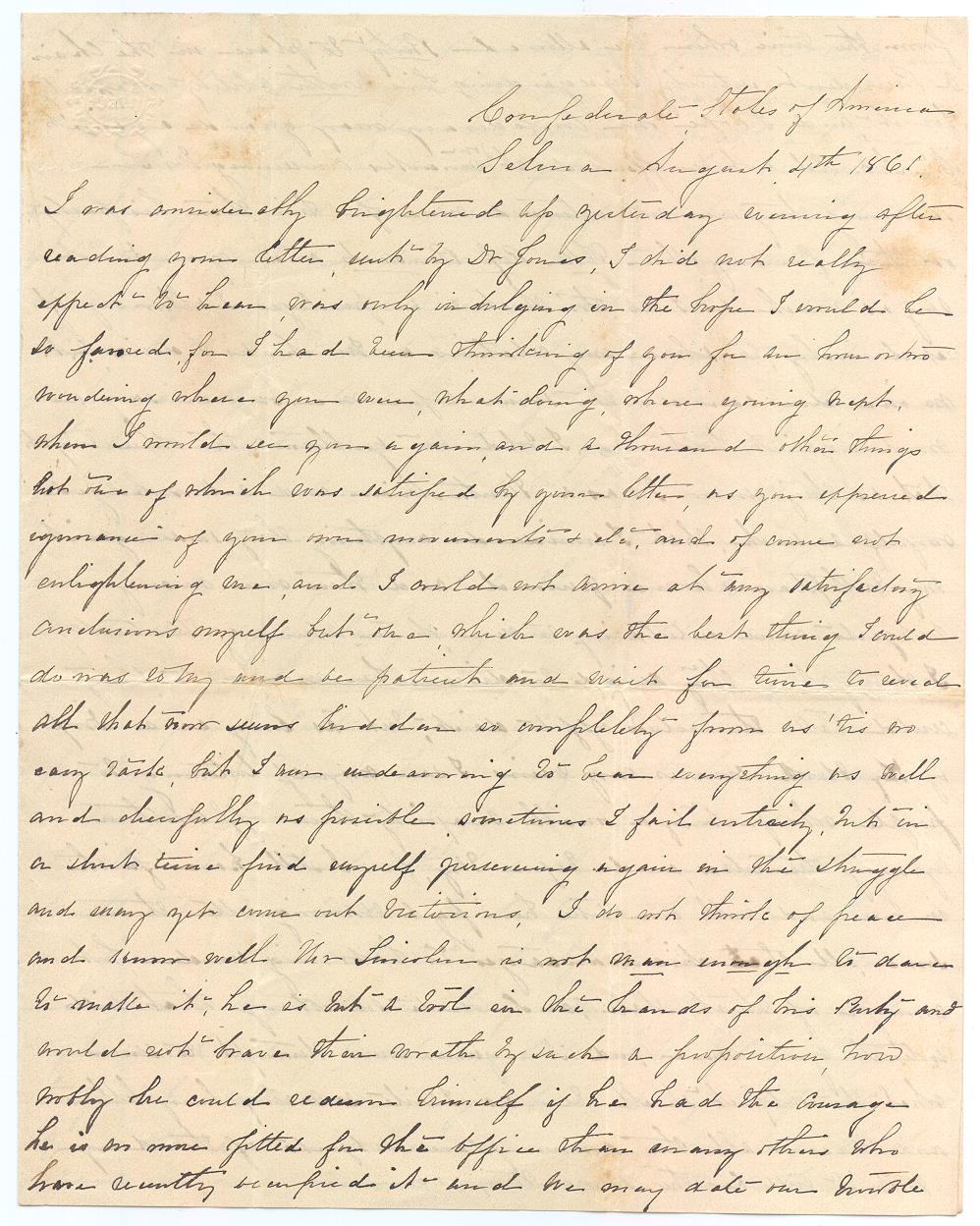 I was considerably brightened up yesterday evening after reading your letter, sent by Dr. Jones. I did not really expect to hear, was only indulging in the hope I would be so favored, for I had been thinking of you for an hour or two wondering where you were, what doing, where going next, when I would see you again, and a thousand other things but one of which was satisfied by your letter, as you expressed ignorance of your own movements and etc. and of course not enlightening me, and I could not arrive at any satisfactory conclusions myself but one, which was the best thing I could do was to try and be patient and wait for time to reveal all that now seems hidden so completely from us ’tis no easy task, but I am endeavoring to bear everything as well and cheerfully as possible. sometimes I fail entirely, but in a short time find myself persevering again in the struggle and may yet come out victorious. I do not think of peace and know well Mr. Lincoln is not man enough to dare to make it. he is but a tool in the hands of his Party and would not brave their wrath by such a proposition, how nobly he could redeem himself if he had the courage he is not more fitted for the office than many others who have recently occupied it and we may date our trouble from the time when we allowed Party to place in the chair a President, entirely disregarding his worth, ability, or capacity for it, and I hope our Confederacy may guard against it. I would not be offended at your remarks concerning Mr. L. knowing they are not intended more for him than his party or than for any other Blk. Rep. President and you do not say as much as I do, tho’ that is a privilege I allow myself exclusively, to abuse my relations as much as I desire, but no one else can do the same before me or even say a word against Kentucky. I told two gentlemen the other night that as they knew I was a Kentuckian and acknowledged myself as such, that I considered anything they said against my birthplace and home personal and there were many subjects more entertaining to me, than abuse of Kentucky. I thought if they desired to discuss her movements, they could take themselves off to do it, but as long as a drop of Ky. blood courses my veins I see myself listening to people who just by a small majority threw off northern tyranny themselves, and before Ky. for I still have faith in her and will ever take her part knowing better than some, all the disadvantages she is laboring under, but enough of that state, and on to something that will interest you more, and it requires some thought to know what the subject shall be, as I write so many long letters and discuss all the commonplace subjects of the day that it will be the same thing over.

I wish I could talk to you in place of writing. I would have so much more to say and enjoy it more, for I always was averse to letter writing, tho’ from the length of mine you would not judge so, yet it is true and when you return I expect to be able to count the letters I will write but really I must cease. I hope to hear from you today. What has become of Mr. and Mrs. Hardie. Remember me kindly to Mr. Averitt when next you see him and assure him I am his friend. Goodbye may heaven bless you and your cause, watch over and protect you from danger and harm, is the ever constant prayer of your devoted,