5 August 1861: “I have deciphered & read two letters that were brought in, but am stuck on a note book picked up on the field of battle…it was written by a confoundedly smart fellow.”

Posted on 5 Aug ’11 by Biff Hollingsworth

Item description: Letter, 5 August 1861, from Edward Porter Alexander to his wife in which Alexander describes some of the cryptanalysis that he has been doing for the Confederate Army. 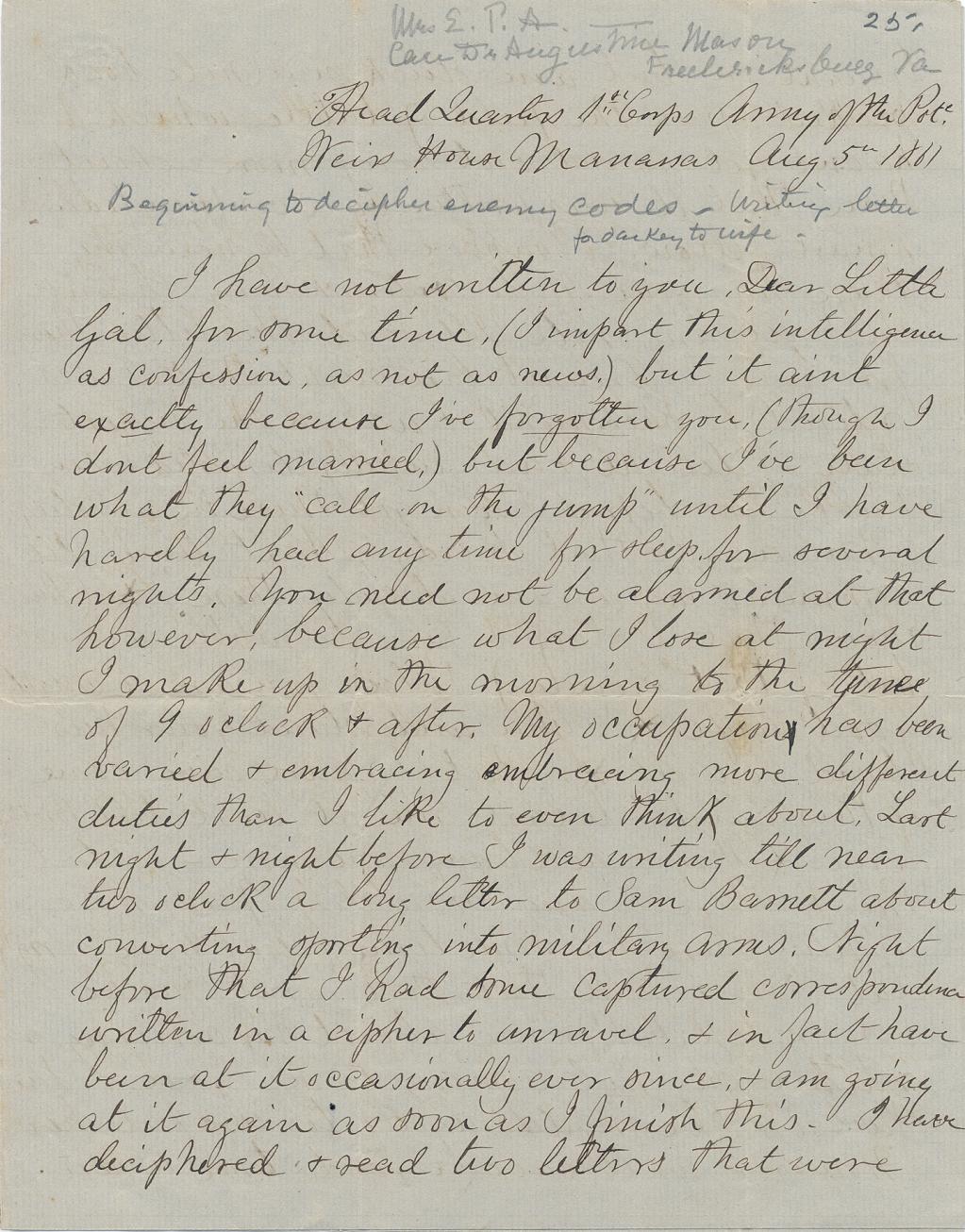 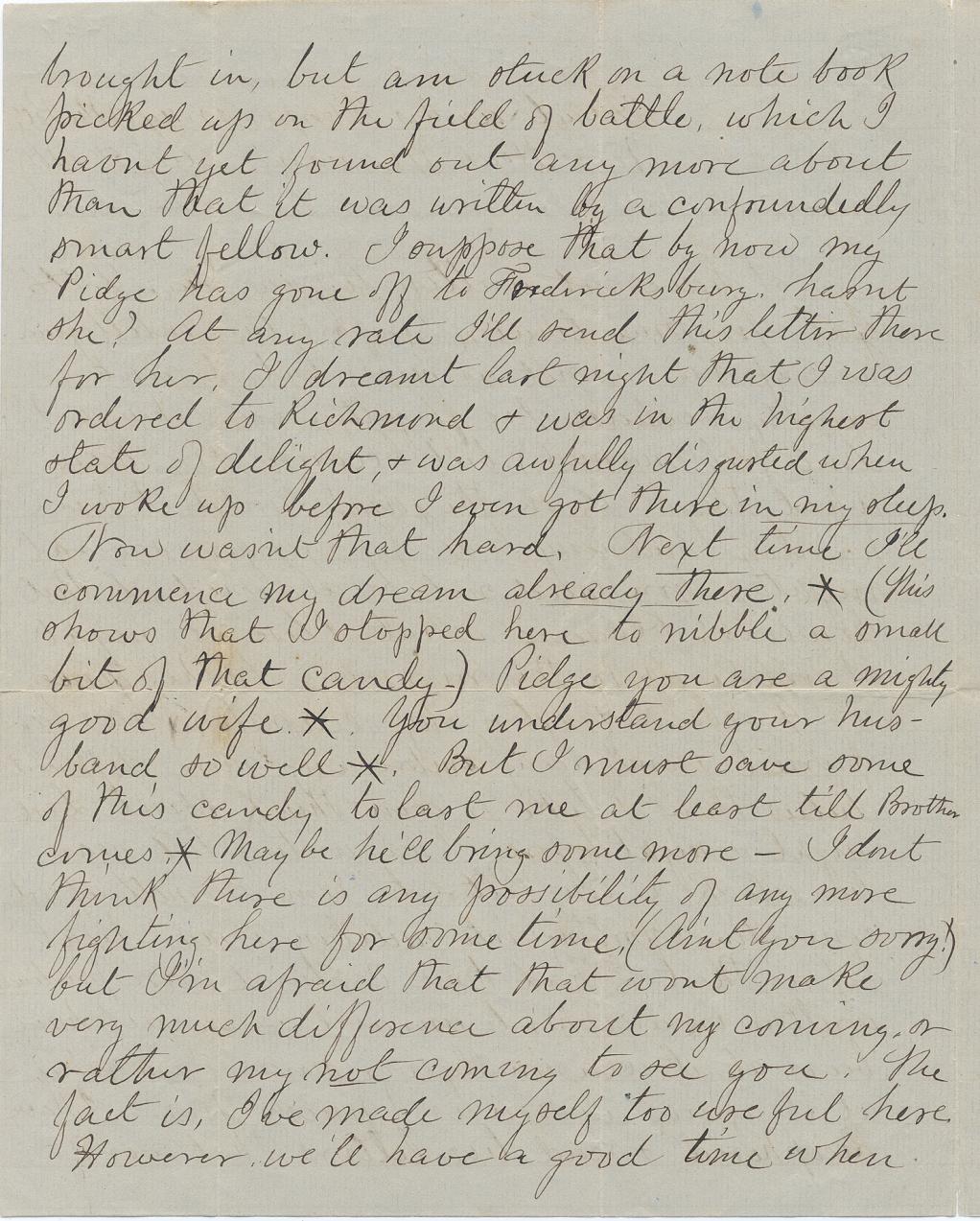 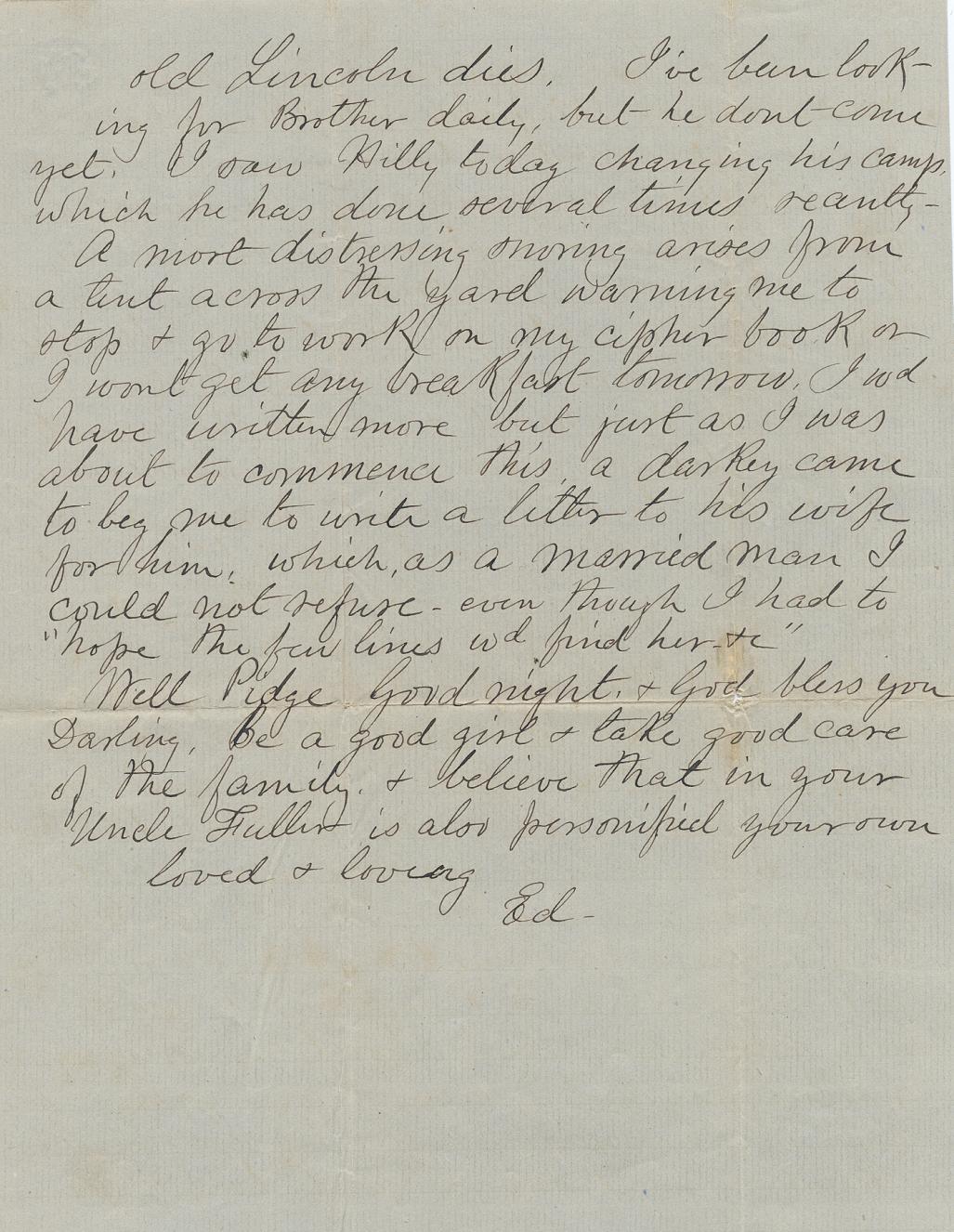 I have not written to you, Dear Little Gal, for some time, (I impart this intelligence as confession, as not as news.) but it ain’t exactly because I’ve forgotten you, (though I don’t feel married,) but because I’ve been what they “call on the jump” until I have hardly had any time for sleep for several nights. You need not be alarmed at that however, because what I lose at night I make up in the morning to the tune of 9 o clock & after. My occupation has been varied & embracing embracing more different duties than I like to even think about. Last night & night before I was writing till near two o clock a long letter to Sam Barnett about converting sporting into military arms. Night before that I had some captured correspondence written in a cipher to unravel, & in fact have been at it occasionally ever since, & am going at it again as soon as I finish this. I have deciphered & read two letters that were brought in, but am stuck on a note book picked up on the field of battle, which I havnt yet found out any more about than that it was written by a confoundedly smart fellow. I suppose that by now my Pidge has gone off to Fredericksburg, hasn’t she? At any rate I’ll send this letter there for her. I dreamt last night that I was ordered to Richmond & was in the highest state of delight, & was awfully disgusted when I woke up before I even got there in my sleep. Now wasn’t that hard. Next time I’ll commence my dream already there. * (This shows that I stopped here to nibble a small bit of that candy.) Pidge you are a mighty good wife. * You understand your husband so well. * But I must save some of this candy to last me at least till Brother comes. * May be he’ll bring some more – I don’t think there is any possibility of any more fighting here for some time, (Ain’t you sorry!) but I’m afraid that that won’t make very much difference about my coming or rather my not coming to see you. The fact is, I’ve made myself too useful here. However, we’ll have a good time when old Lincoln dies. I’ve been looking for Brother daily, but he don’t come yet. I saw Hilly today changing his camp, which he has done several times recently.

A most distressing snoring arises from a tent across the yard warning me to stop & go to work on my cipher book or I won’t get any breakfast tomorrow. I wd. have written more but just as I was about to commence this a darkey came to beg me to write a letter to his wife for him, which as a married man I could not refuse – even though I had to hope the few lines wd. find her, &c.”

Well, Pidge, good night & God bless you Darling. Be a good girl & take good care of the family & believe that in your Uncle Fuller is also personified your own loved & loving